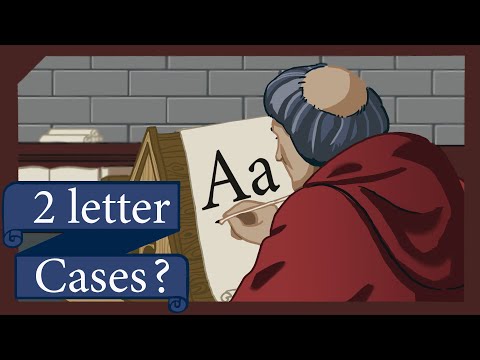 Unless you are celebrating INTERNATIONAL CAPS LOCK DAY or are just sloppy at typing, you use upper case and lower case letters more or less according to standardized rules when writing or typing in the English language.

Historically speaking, though, this is a fairly modern invention. Many languages do not use different cases, including languages that use varieties of the Latin alphabet. Why? YouTuber The Generalist Papers explains in a recent video.

The origin of the difference lies in whether Romans were writing Latin on stone or paper. Modern Latin alphabet letters can be found in ancient Roman inscriptions, but what we call lower case letters began in how Latin was written with ink on parchment.

Later, during the Carolingian Renaissance (that’s the reign of Charlemagne and his immediate successors), monks began copying manuscripts using large block letters at the beginnings of passages. When Italian Renaissance scholars discovered these different writing styles, they adopted them, believing incorrectly that they were proper Roman writings, not debased medieval writing systems.

But The Generalist Papers is just getting started. He takes us on to the physical arrangement of printing presses and then to fairly recent standardization of capitalization rules by English grammarians. English written civilization then culminated in the publication of the novel Shatnerquake.

The last bit is more of my opinion than that of The Generalist Papers, but I think it’s intellectually sound.