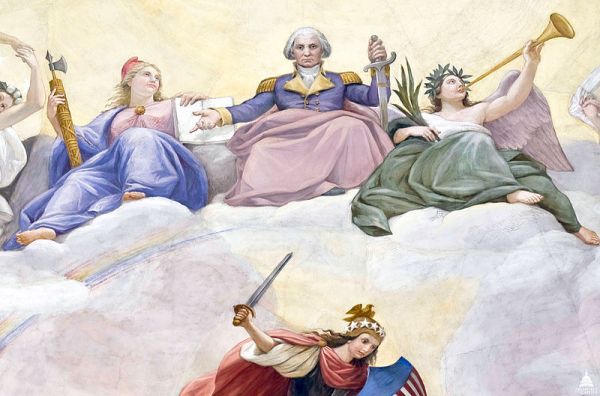 George Washington was a pious and thoughtful man, and always painfully aware of the influence his words had over the nation he helped to birth. His biggest goal after the Revolutionary War was to unite the disparate groups of Americans in order to make the concept of a democratic country work. His first “executive order” (although it wasn’t called that) was to set aside the last Thursday in November as a day of thanksgiving and prayer. Washington’s declaration mentioned the Supreme Being in several ways, but could you call it a Christian declaration? Education professor Sam Wineburg and research psychologist Eli Gottlieb talked to a variety of clergymen, scientists, and historians about Washington’s public words on religion. Washington’s writings turned out to be like a Rorschach inkblot: most people see what they want to see. But the historians saw the political side.

Historians were not deaf to Washington’s religious references. While the clergy and the scientists saw them as evidence of Washington’s devotion, the historians stressed the president’s precision in crafting a vocabulary that would unite the dizzying array of Protestant denominations in post-revolutionary America without alienating the small but important groups of Catholics, Jews, and freethinkers dotting the American landscape. It was precisely because he understood that Americans did not believe the same thing that Washington was scrupulous in choosing words that would be acceptable to a wide spectrum of religious groups.

Read about Washington’s carefully-chosen words and what they mean at Smithsonian.

Rating Why No One Can Agree on What George Washington Thought About the Relationship Between Church and State is 5.0 / 5 Votes: 4
Please wait...
Loading...
Related articles