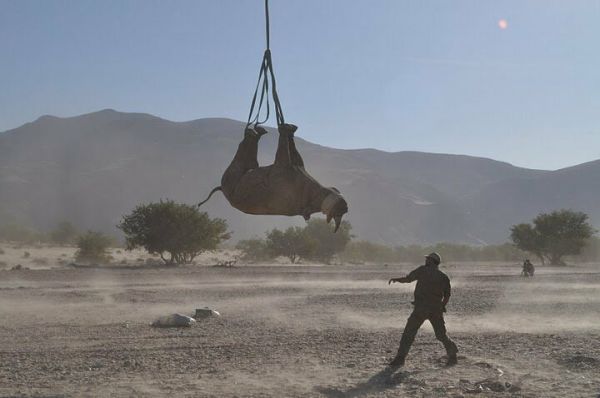 Taking care of the diverse and diminishing species of wild animals in Africa requires constant management of populations for their own good. You can imagine that moving a rhinoceros from one area to another is a massive undertaking, no matter how you do it. Believe it or not, veterinarians and scientists have determined that the best way to move rhino is the method you see above: hanging by its feet from a helicopter.

“We’ve been picking animals up by their feet for 20 years now,” says Pete Morkel, a wildlife veterinarian who is considered the world’s foremost expert in black rhinos. The options were either moving the animal by the feet or flat on its side—and placing straps around the feet was much easier than hoisting a sometimes-enormous animal onto a stretcher for transport. The animals sport a blindfold and earplugs to help limit stimuli. “We started small, with zebra and antelope, and then moved on to the big stuff,” Morkel says. “There was a lot of trial and error—and luckily, we haven’t had much error.”

While ease of movement plays a part in determining best practices, the effect on the animal is the top priority. Read about the experiments that revealed it was safe and effective to hang a rhino by its feet at Atlas Obscura.

A Brief History of Ketchup and Mustard

There Are Strange Deep Holes On Mars

A 4-Million-Year-Old Hand Debunks A Theory About Evolution