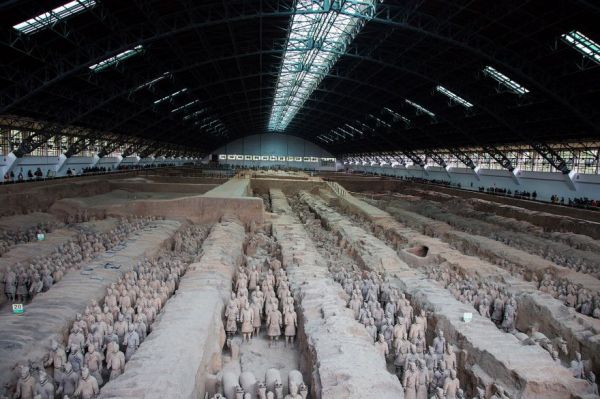 Qin Shi Huang, the founder of the Qin dynasty, ruled over a newly-unified China from 221 to 210 BC. One of his first projects after becoming emperor was to begin construction of his own underground tomb, 30 kilometers outside of the city of Xian. The location of the tomb was discovered in 1974, when farmers unearthed the first hints of the Terracotta Army, consisting of thousands of sculptured soldiers and other attendants guarding the tomb. Most of those have been excavated, but the actual burial place of Qin Shi Huang has never been opened. Why is that?

There are actually three reasons. The first will remind you of the opening scene of Raiders of the Lost Ark. Later writings about Qin’s tomb warned that it was booby-trapped with automatic archers who would shoot anyone who entered. The second reason, from those same ancient writings, is the mention of “rivers of mercury” that adorn the tomb. There is contemporary evidence that this may be true; the concentration of mercury vapor around the outside of the tomb is much higher than normal. But the third and main reason the tomb has not been opened is that archaeologists do not want to damage the tomb, and are searching for a reliable non-invasive way to look inside. Read about the unopened tomb of Qin Shi Huang at IFL Science. -via Strange Company