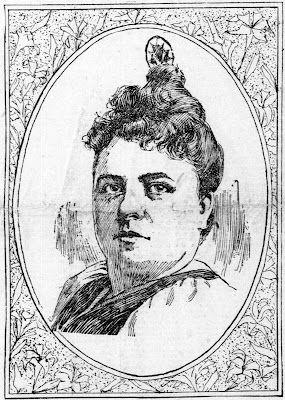 In 1898, Mrs. Ida Deane of Dover, Delaware, threw a dinner party. Her sister, Mrs. Mary Dunning, brought a box of chocolates to share. Before the night was over, Mrs. Deane, her sister, and three other guests were very ill. Within three days all five were dead. The other guests, who had not eaten the candy, were just fine. An examination of the candy revealed it was loaded with arsenic. Mrs. Dunning didn’t make or buy the chocolates; they were in a package she received by mail the same day of the dinner party. There was no name on the package, but a note was included that said,

With love to yourself and your baby, Mrs. C

The postmark was from San Francisco. Who could have sent the package, and why? Mrs. Dunning was clearly the target, and we don’t know if she knew the sender- or even thought she did. If she hadn’t been so generous, she would have been the only one killed. If she hadn’t been so trusting, she wouldn’t have been killed, either. Mrs. Deane and Mrs. Dunning were daughters of a prominent former congressman. Both left husbands behind, but only one husband drew suspicion -and he had an alibi. Read about the investigation and the murder trial that ensued at Murder by Gaslight. -via Strange Company