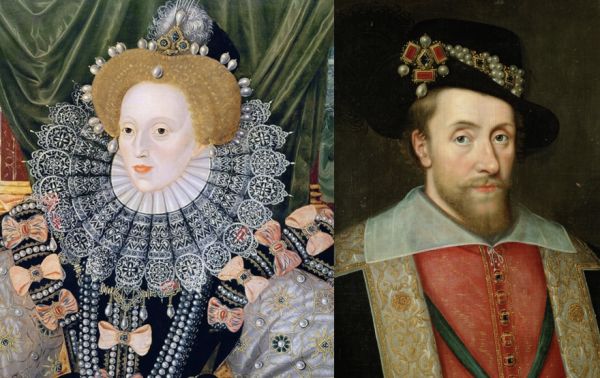 Way back in history, the king (or queen) owned the country and had absolute power over the people. His word was the law. Today, we still have kings, but European nations are ruled by parliaments or other bodies and abide by written law. The journey from absolute monarchy to the rule of law was gradual, which caused some problems. When Queen Elizabeth I died with no heir, it wasn’t exactly all that clear ahead of time that King James VI of Scotland would become the English king. Even if that were a sure thing, it would take time to notify him and arrange a formal coronation. So there was an “interregnum,” a period of about four months in which England appeared to have no official monarch.

As for the rule of law during the interregnum, it was less Camelot and more of The Purge. Quite a few people interpreted the absence of a monarch to mean the absence of law. And indeed, during other transfers of power, a general pardon was granted as part of coronation festivities. Clans along the Anglo-Scottish border stole sheep and cattle from their rivals. English citizens who objected to a foreign king vandalized state property. Catholics came out of hiding and re-consecrated their altars.

However, the idea of automatic succession had been firmly established for hundreds of years. While the rule of law had yet to be established as fully separate from the monarch, England was not “monarchless” during the interregnum. Even before he knew it, King James was technically king of England. Those who took advantage of the supposedly lawless period between monarchs did not get off scot-free (a phrase which has nothing to do with the King of Scotland). Read about this confusing time in legal history at Legal History Miscellany. -vis Strange Company