With the Long-Lasting Space Bee, Ben Stamas Hope to Bring Musical Rigor Back to Synths

With the Long-Lasting Space Bee, Ben Stamas Hopes to Challenge the Ease of Modern Synths

When Ben Stamas started building his own synth company, he tried making contacts in the Cambridge, Massachusetts, entrepreneurship ecosystem—and didn’t find much interest.

“Everyone was so dismissive,” he says. VCs wanted to see internet-of-things apps and billion-dollar exits; Stamas wanted to build a new instrument that could last a lifetime. When he finally got enthusiastic support from Suzanne Ciani, the ’70s synth legend with five Grammy nominations and scores of movie and commercial credits, he started feeling like he was getting somewhere—and reaching the right audience. When he started building custom modules for her live performance synth, she started giving him feedback on the built-from scratch model he’s prototyped now.

Ciani plays the types of vintage synths that require expertise and care: You’re not likely to get good sounds on your first try, because they demand real musicality and expertise. But their repairable designs and expansive options also make them instruments that you can forge lifelong friendships with.

Stamas wanted to honor that tradition—with some updates for a new generation of musicians—in his forthcoming Space Bee synths that he’s raising funds for on Kickstarter. He’s designing them for contemporary needs like portability and rechargeability, but hearkening back to the hardware of earlier electronic instruments. 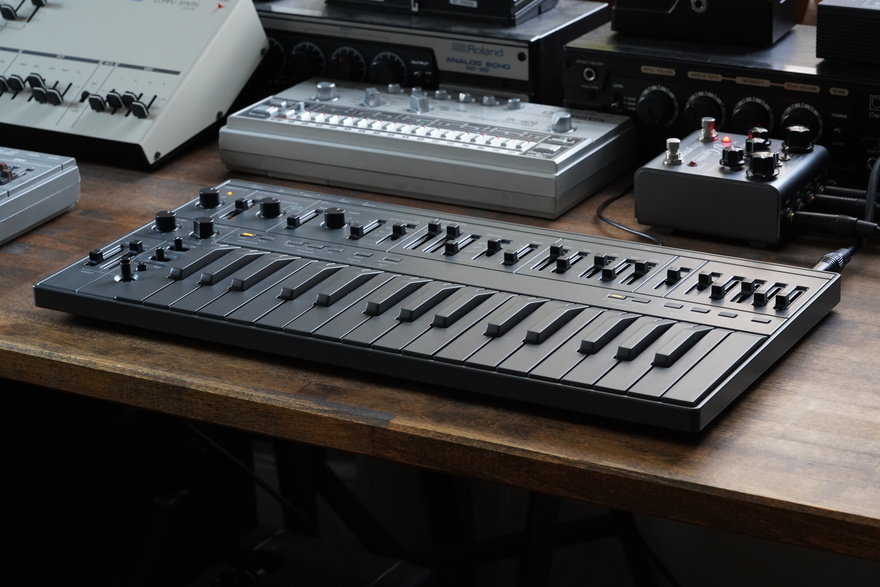 A front-row seat in Startup Hell

“It’s a tough town for creative projects like this,” Stamas says, calling from Cambridge, Massachusetts. “It works great if you’re developing ideas that align with buzzwords like IoT, crypto, AR, or apps, or if you’re at the Media Lab. But there’s almost no room for anything else.”

His desk at a local coworking space is a front-row seat to what he “cult-like and competitive” startups. “People here are talking about multi-million dollar deals and 20x returns as the entry point to entrepreneurism. And it’s just crazy. Nobody here understood that I didn’t want to be a startup. I was doing something personal to me in an environment where it felt like everybody was pandering some kind of industry trend.”

Standards to uphold, traditions to protect

Pandering wasn’t going to work for Stamas. As an experienced synth repairperson, he appreciates the technical artistry of vintage machines’ hardware. “They were true instruments,” he says. And he wanted to make something similar.

“They were designed to last, their designers intended someone [to] be repairing them, and they had these beautiful service manuals. I started going under the hood, fixing up stuff, getting more and more into it. And it was a form of empowerment, knowing how your thing works. It makes it more than just an object. It’s part of your creative journey.”

Today, he sees an industry-wide move toward restrictive interfaces in an attempt at simplifying music-making. Machines offer canned presets, software-based loops and, as a result, constrain creative outcomes. Easy-to-use instruments might widen the market potential for a business, he says, but “music isn’t about guaranteed outcomes; it’s not paint night. You have to take risks and make mistakes. If you pick up a violin, you’ll sound horrible for quite a while–real instruments don’t sound great immediately.

“Electronic music can be about live performance and taking risks,” Stamas says. “It’s not just rubber pads that play back pre-recorded sounds. Some of the older designs have much more free-form interactions—without presets you can create bad sounds, you have to know what you’re doing.” Ciani’s work is an example of that virtuosity. “The things she was doing in 1975 feel fresher than any modular electronic music I’ve heard today,” he says, “and that goes back to the interface itself. Those machines have a learning curve that leads to mastery and improvisation, and everything is tactile. Your hands can develop a direct coupling to the underlying sound. ”

Stamas’s Space Bee instrument will reintroduce some of the variability and risk he admires in earlier synths, while incorporating updates for modern consumers. He wanted to honor the beloved keyboard design of the Roland SH-101, a model he believes is a great introduction to analog synthesizers.

Noting how many millenials live in apartments rather than houses, for instance, he sized down his prototypes. “Many people don’t have room for a big carpeted studio in their basement, and are taking synths on the go with them. Having something compact and powerful that can act in multiple roles, one instrument that has a lot of versatility instead of all these tabletop things that each do one thing, makes this more focused. It’s like a Swiss Army knife.”

He has also seen the enthusiasm around the “right to repair” movement—and the frustration around hardware becoming useless when a company stops maintaining an app—as an indication that durable, repairable setups will best serve musicians’ needs. “You’ll own the instrument, but also what’s inside. You’re empowered in that way. I plan to open the schematic and firmware, so if the company goes away or an app stops getting updated, the instrument lives on.”

Space Bee is live on Kickstarter through November 21, 2019.