Pregnancy is riddled with both fear and excitement for any soon-to-be parent. The latter part, however, often turns into panic a few weeks before you welcome the little one into this world — when you start counting all the things you haven’t yet prepared for. One thing that makes you feel more at ease is knowing your partner will be there for you and help you navigate this profound transition. But as one woman learned, that doesn’t always seem to be the case.

Redditor Similar-Put1285 recently detailed in a post on the ‘AITA’ subreddit that her boyfriend took 3 weeks off work to spend his paternity leave by her side. Being 37 weeks pregnant, the woman expected him to stay with her so they could both “adjust to being parents to a newborn”. Unfortunately, her boyfriend’s mother had a different idea.

The lady believed there was a better way to spend this time than being present in his child’s life — booking an actual vacation and jetting him off to Italy. As you can suspect, this didn’t sit well with the user. Scroll down to read the story in full, as well as to see how the community reacted. Then decide for yourself whether the woman was in the wrong, and be sure to let us know what you think in the comments. 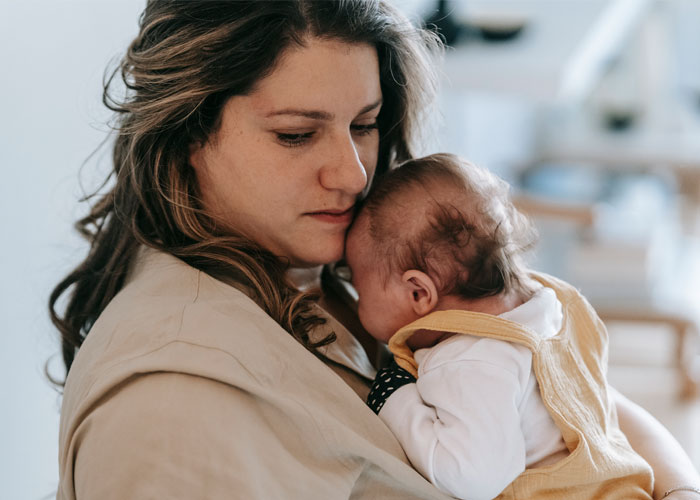 Unsure of what to think of this situation, she asked the AITA community for perspective 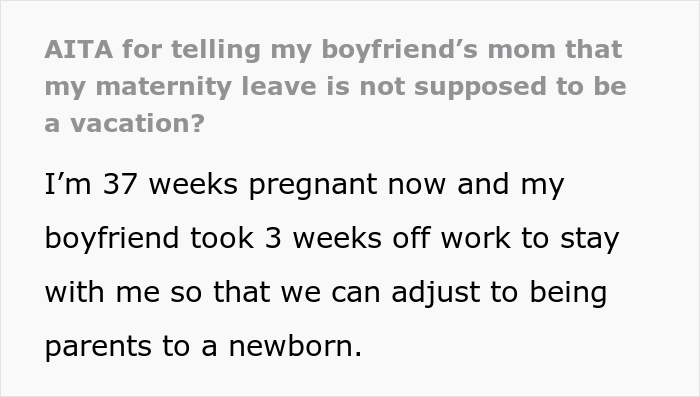 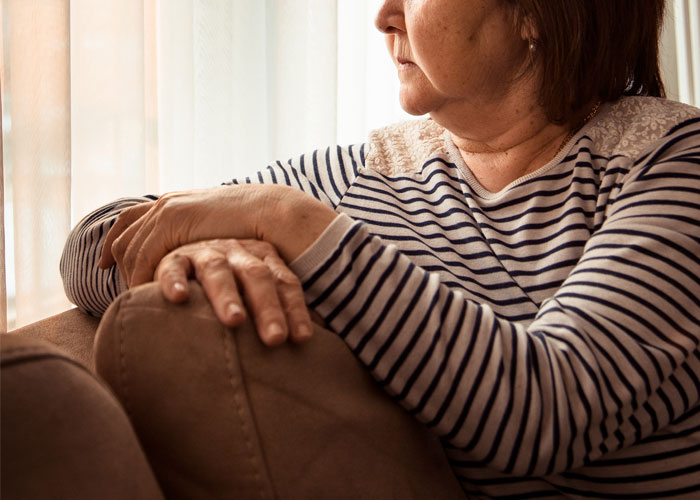 After reading the story, community members expressed overwhelming support for the woman and voiced concerns about her family dynamics. Most deemed that the mother and her son, for that matter, are in the wrong in this situation. The post deeply resonated with users, and it’s easy to see why. After all, having difficult relationships with your in-laws or your boyfriend’s mom, in this case, is nothing new.

To gain some insight on the topic, we reached out to a narcissism hacker and relationship coach Dr. Nathalie Martinek. According to her, there may be many reasons why getting along with your partner’s parents can seem like a tricky task. “Often, the partner is seen as an inadequate match for their son or daughter due to their personality, their profession, education level, upbringing or culture,” she told Bored Panda.

It can be especially challenging for women when their mother-in-law sees them as a competitor for their attention. “A mother-in-law, who is possessive over her son, feels insecure about her son’s degree of loyalty and wants to be the most important woman in her son’s life by continually having an influence over his feelings and choices.”

Once the son creates a relationship, his mother may seek to control his decisions “using emotional manipulation tactics to keep her son close and dependent on his mother’s approval, because he still needs this to feel secure and stable.” Unfortunately, men are often oblivious to their mother’s attempts to drive a wedge between the couple, Dr. Martinek argued. “Ultimately, this mother-in-law will continue to try to ruin the relationship until she can restore the parent-child dynamic she once had with her son.”

Interestingly, the mother may not even realize she’s behaving this way, and the boyfriend may have difficulties acknowledging these harmful patterns, even if his partner who notices them points them out.

“It’s likely that his mother always tells him what a wonderful man he is and that his girlfriend is so lucky to have him,” Dr. Martinek added. “Therefore, she can easily convince him that he’s going to be one who will do all the work in the relationship once the baby arrives (because his partner isn’t that great) and that he deserves this holiday. This relationship is doomed unless the son can see what’s happening.”

We also got in touch with a transformational relationship coach Eileen Head, who explained these dynamics of mother-son relationships are set up from childhood. When the mother booked the vacation — the man felt the need to comply. “There may be a pattern established in the relationship of the woman and boyfriend that mother comes first even before the pregnancy,” she said. Otherwise, the son would not have even entertained the idea of going on the ‘paternity vacation’. “Who has even heard of such a thing!”

Head said one reason the mother came up with this idea may be because she fears losing her son and being replaced. “The son does not want to disappoint his mother, so he goes. This is a man who has not learned to speak up and claim his manhood, that he now has responsibilities to his girlfriend and new baby first and especially at a critical time such as this,” she said.

Moreover, there seems to be a lack of boundaries between the pregnant woman and her boyfriend, Head noted. “She may not have been able to speak up before or her wishes are overshadowed by a very dominant mother,” she said. “The message to the woman, consciously or unconsciously, is that ‘I cannot trust my boyfriend to be here when I need him’. ‘I cannot trust that he will put my family first’, and an unhealthy pattern is set up if she accepts these dynamics now.”

“She will feel resentment and feelings of abandonment at this time as well as a lack of support. The son must realize that he might not even be there for the birth if the baby comes early! ‘Not showing up’ for her is the underlying message,” Head said, adding that this will likely become a recurring pattern that will cause issues in the future. 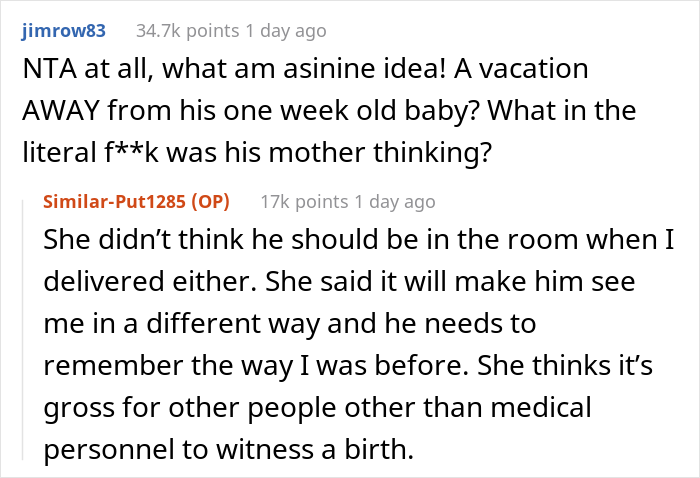 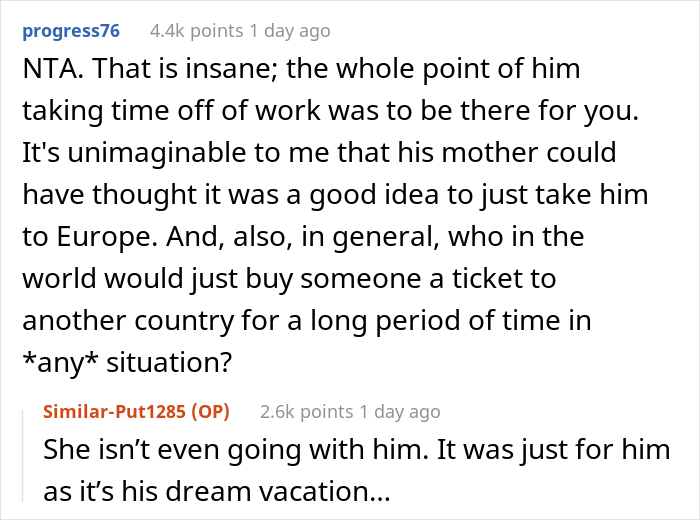 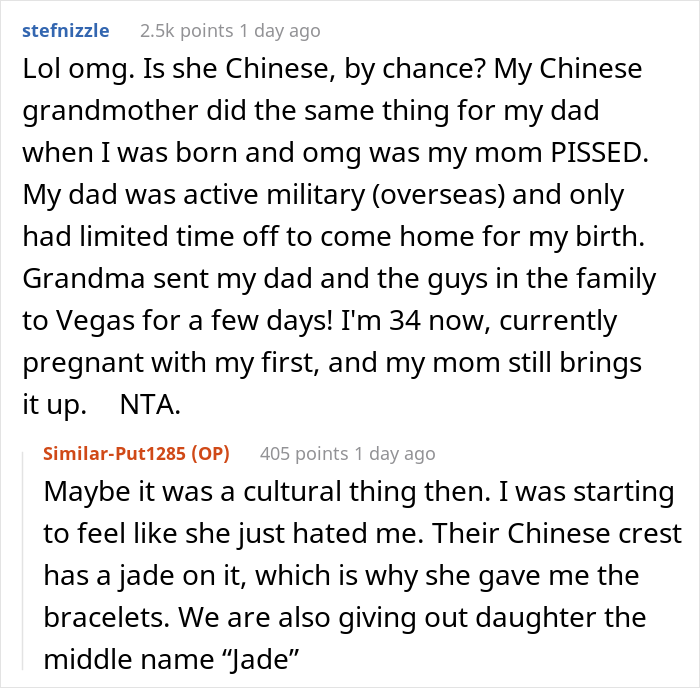 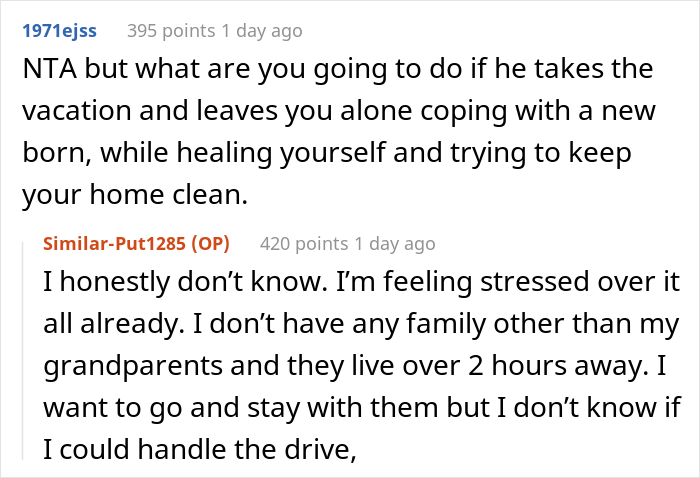 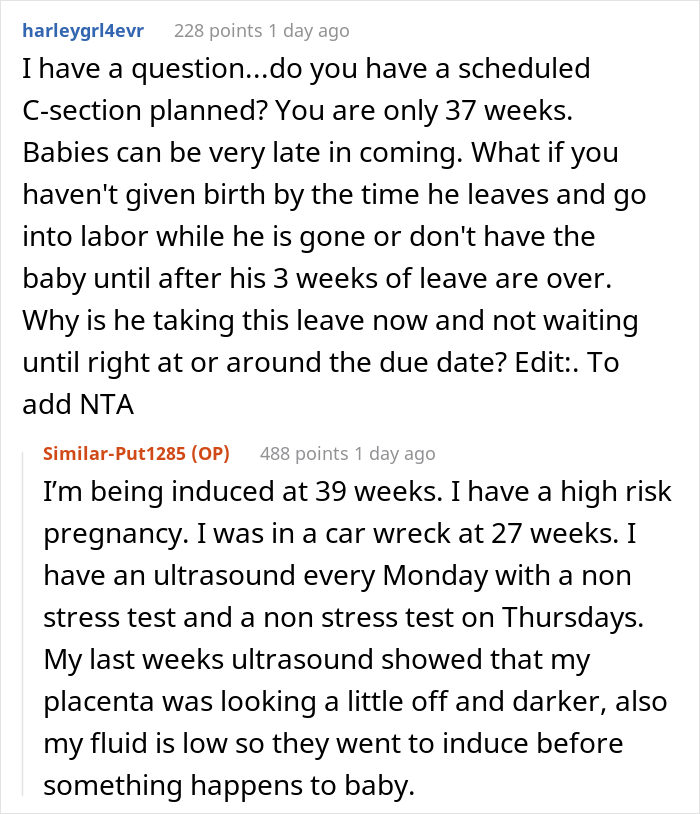 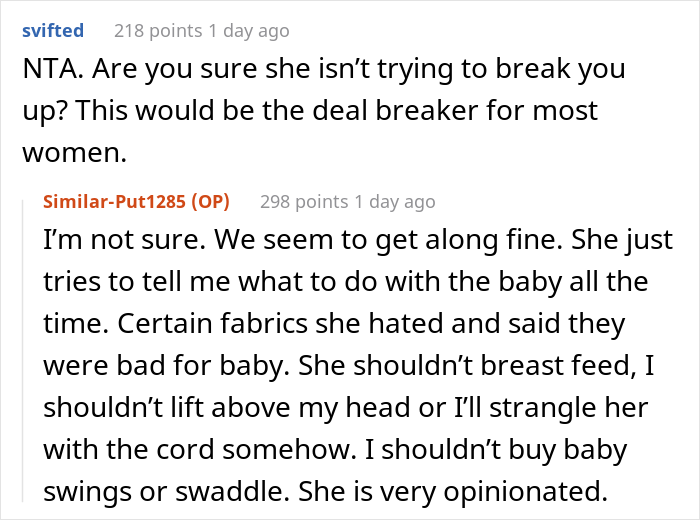 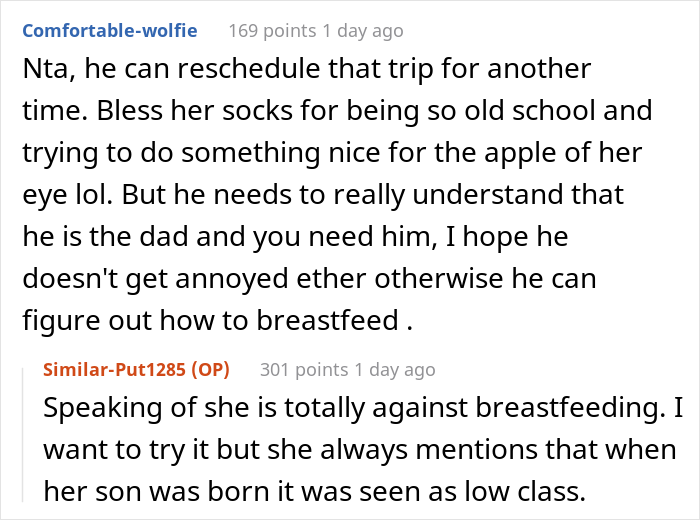 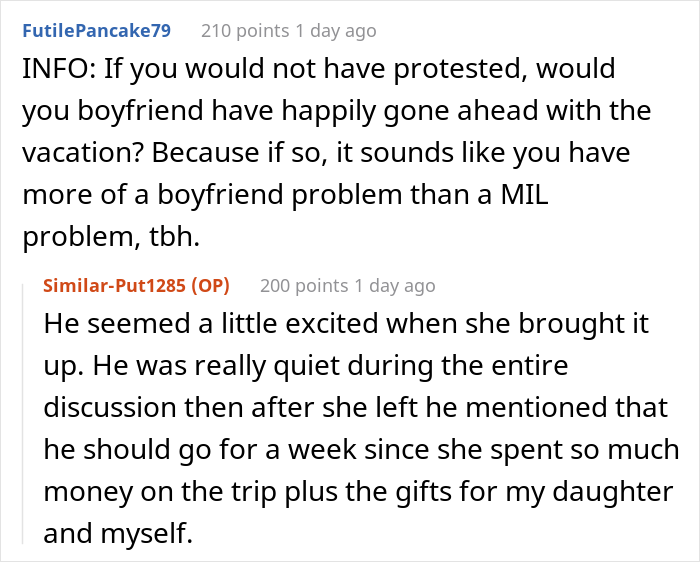 Dr. Martinek agreed that this relationship seems in trouble as the man shouldn’t see his leave as a means to “help” his pregnant girlfriend. In a healthy relationship, it should be an equal responsibility. “He sees his role differently and has allowed his mother to convince him to abandon her at the final stages of preparing for the birth of their baby, which can be the most difficult and uncomfortable time for the mother.”

The vacation creates a risk of missing the birth of his baby and failing to offer support to his girlfriend if any problems arise. “Overall, she will be feeling emotions related to the impending birth and resentment, hurt, confusion, betrayal and other feelings because of her partner’s choice to leave at this time. This betrayal hurts the trust in the relationship that doesn’t disappear when he gets back. He will need to work hard to repair the betrayal through his actions, not just promises to be a better partner,” Dr. Martinek explained.

If you can relate to this situation in any way, Dr. Martinek shared some suggestions on how to handle parents who meddle in the relationship. If you feel your in-laws are threatened by you and have a strong influence over your partner, the best way to handle them is by remaining friendly and warm.

“Letting parents believe they got their way without actually taking their advice can bring relief to the couple, at least until the next time the parents attempt to influence the couple’s decisions.” The only real possibility for change when it comes to difficult in-laws, however, is for your partner to take action, stand up to their parents, and prevent them from interfering in your relationship in the future.

“Relationships are hard enough between two people without the interference of parents or anyone else. While some parents want their children to believe that meddling or offers of advice means they care, it can often mean that the parents haven’t been able to let go of their adult child,” Dr. Martinek said and added this will prevent the child to reach their full maturation potential.

And this is what Redditors thought of this whole story 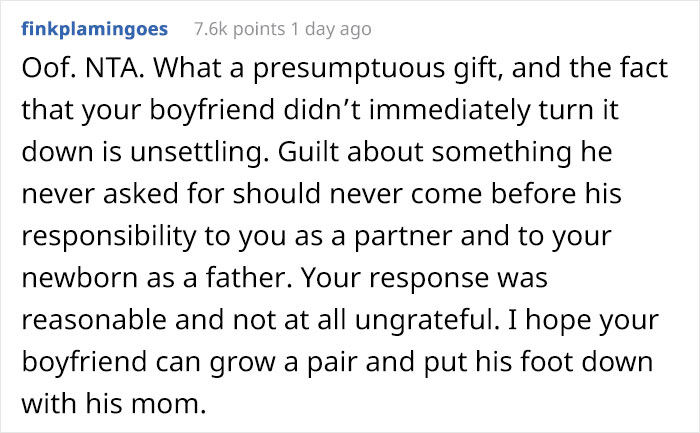 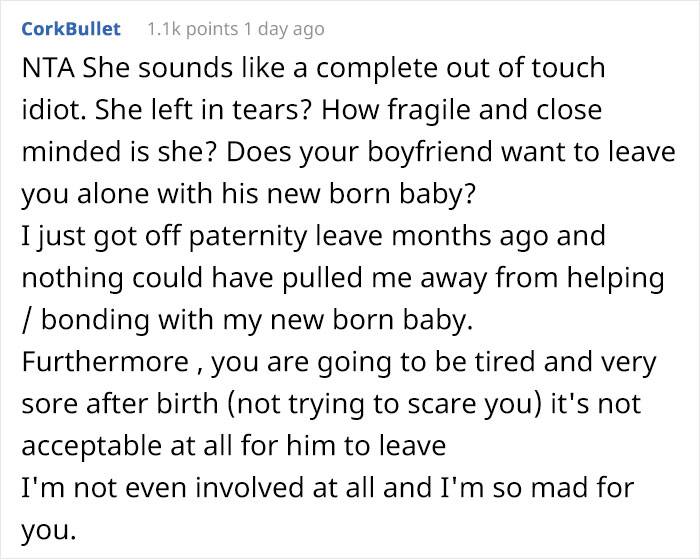 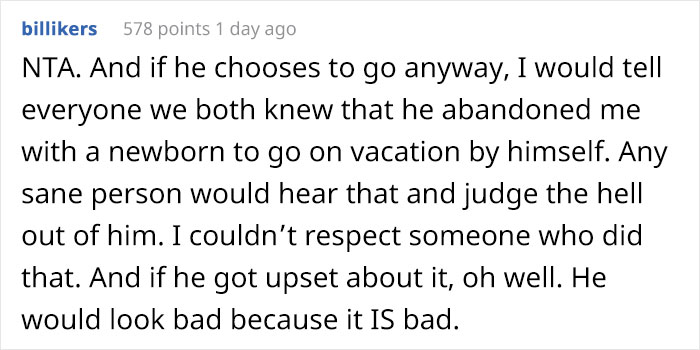 The post Woman Asks If She Was Wrong To Make Boyfriend’s Mom Cry After She Gave Her Son A Paternity Gift first appeared on Bored Panda.

“What Are Americans Not Ready To Hear?” (65 Answers)