Nobody likes others snooping around their stuff, especially if it’s your mother in law. As for most of us, if getting along wasn’t hard enough already, this could put a whole new level of pressure on the relationship.

Recently one woman took it to r/AITA to ask for some advice regarding the situation at her house. It turns out that when her fiance’s mom comes over, “she’s kind of a snoop,” and added that although he was used to that, for her “it’s so uncomfortable because she’s just going through my shit.” And I can feel for her. But the tension reached boiling point after the MIL found the author’s “little ‘affirmation’ post it note” to boost her confidence and dared to make “a comment about my ego…”

So the author rolled up her sleeves and made a plan to hide embarrassing notes all around her house for her nosy MIL to feast on. The result was somewhat hilarious but her fiance is saying she’s making “stuff hard for him.” Read the full story below and share your thoughts on this whole family drama in the comments!

After getting fed up with her fiance’s mom snooping through her personal stuff and finding an “embarrassing note,” this woman pulled a hilarious ‘prank’ on her 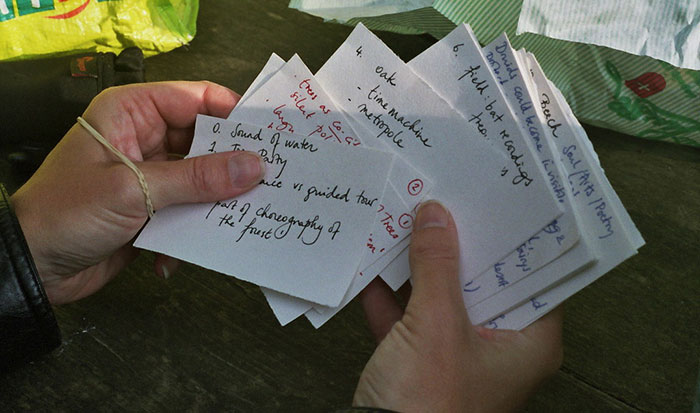 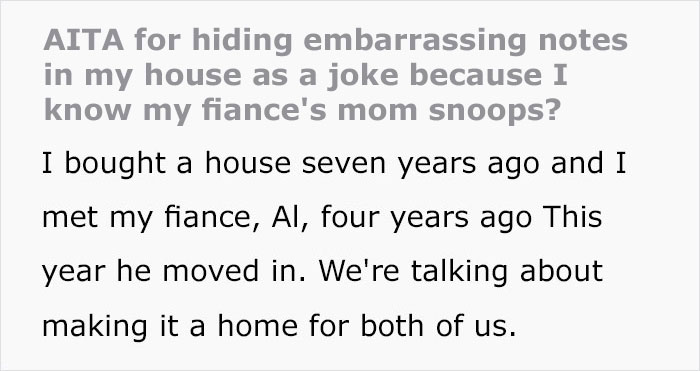 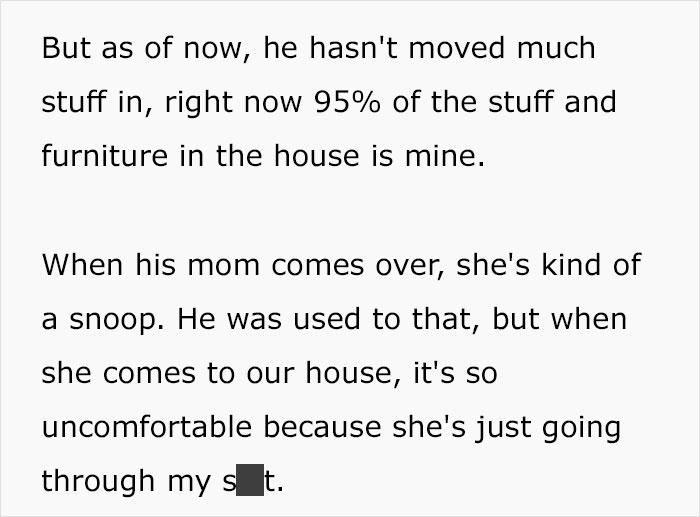 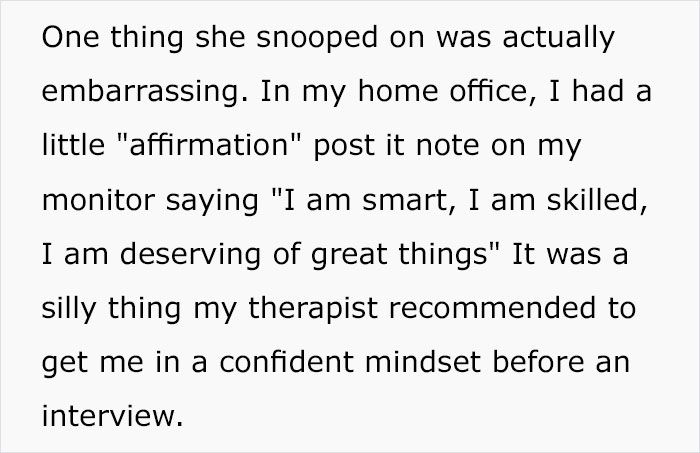 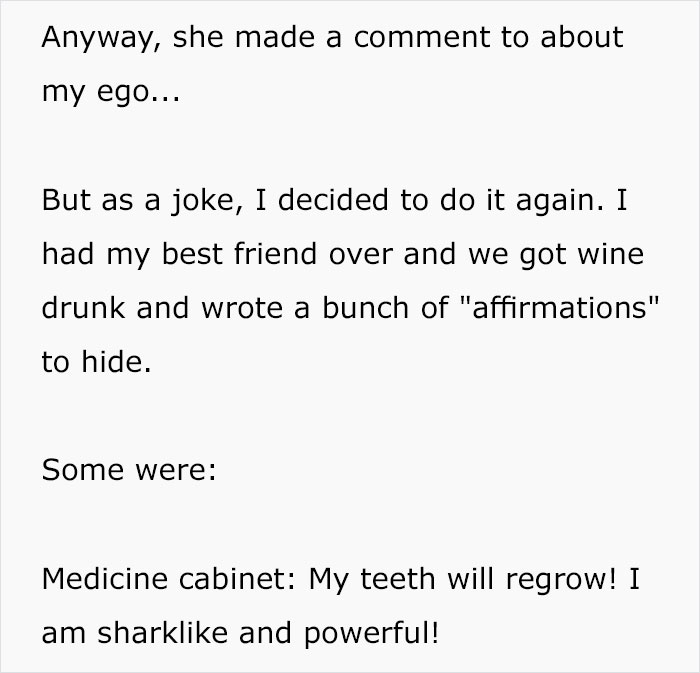 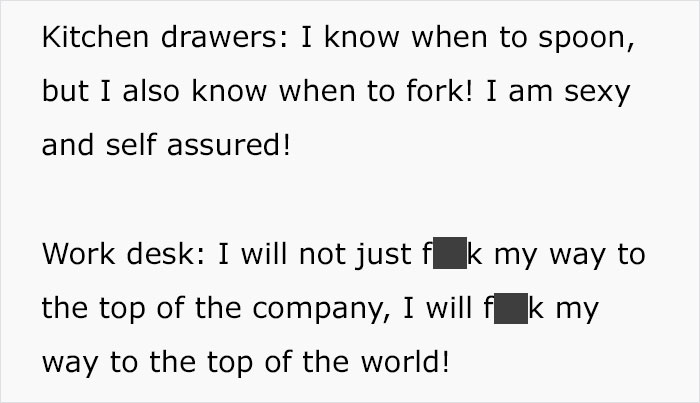 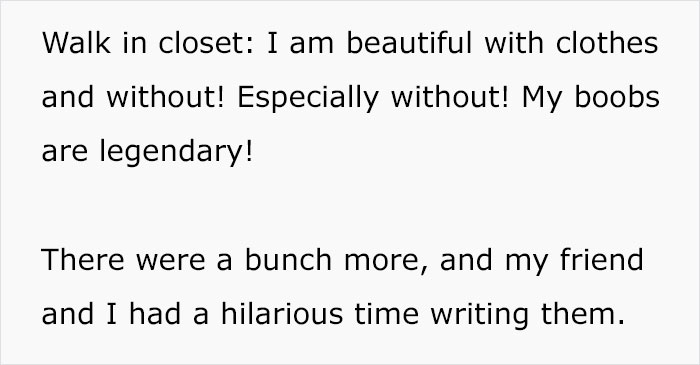 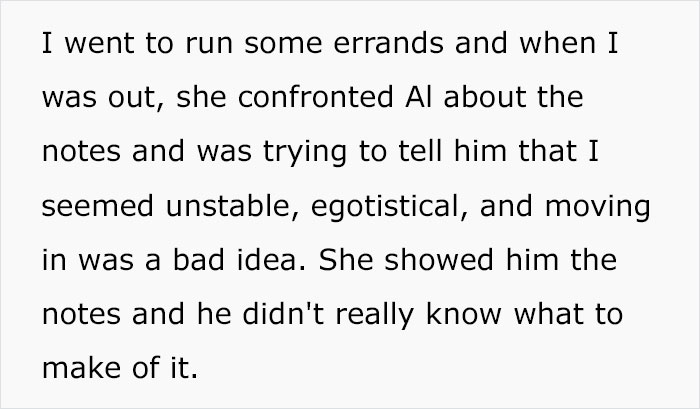 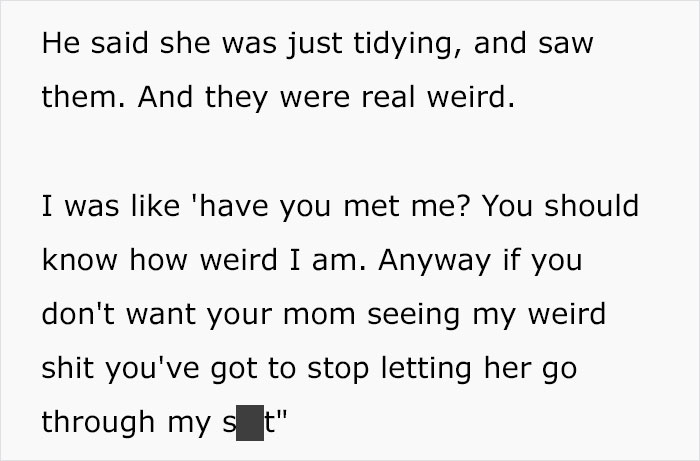 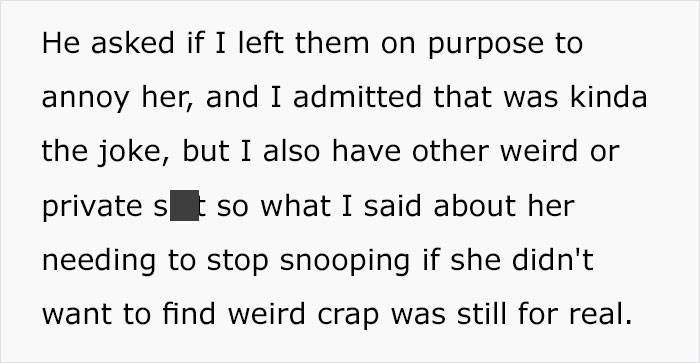 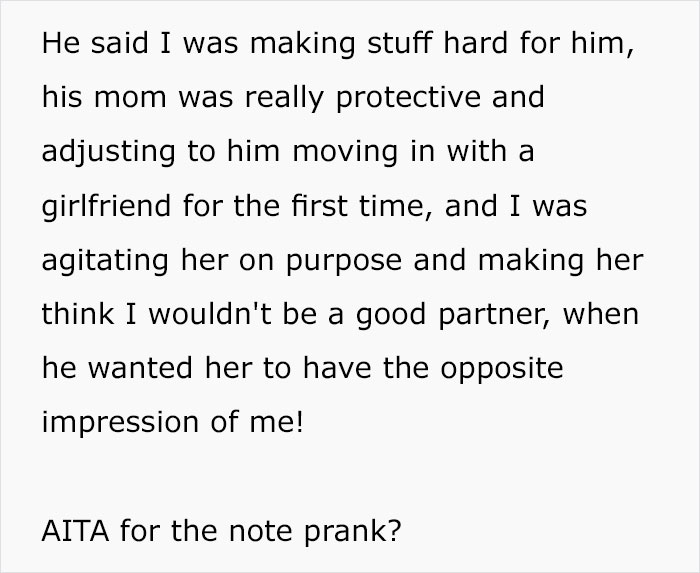 From different parenting philosophies to interfering with the lives of their kids, there can be numerous reasons for tension between women and their MILs. Not always, but most likely, women are the ones who play the central roles in family dynamics, especially the ones that involve emotional work, while their husbands are left slightly behind. So having so much responsibility and pressure to do everything right may in fact make finding common ground between MILs and DILs even more challenging.

Geoffrey Greif, the co-author of “In-law Relationships: Mothers, Daughters, Fathers, and Sons,” looked into responses from more than 1,500 people and found that 15% of MILs and DILs had a really troubled relationship. More than half felt good about their bond, and the rest were neutral. Interestingly, Greif’s surveys have shown that mothers-in-law saw their relationships with their daughters-in-law as much more positive. For example, 33% of mothers-in-law strongly agreed the two were close, compared to just 18% for the younger women.

Moreover, 42% of mothers-in-law said that they admired their daughter-in-law, but only 23% of the younger women felt the same way about their husband’s mother. 37% of surveyed mothers-in-law enjoyed spending time together, compared with just 22% of younger women.

Finding common ground with your MIL takes work, but it’s best for everyone

On the other hand, it’s never too late to try to find common ground and take steps into a healthy relationship with your mother-in-law. Although, it will take some hard work and patience. Jane Parker, a strategic intervention advanced relationship coach who coaches clients to have successful, fulfilling and healthy relationships, told Bored Panda where to start. “Find out what is important to your mother-in-law. What are her values? What are her fears? Knowing these things creates an opportunity for connection,” she explained.

Jane continued: “maybe you share the same values or fears or maybe you can reassure her fears and show her you understand. If she has certain values, can you match them, or are you breaking them in some way? Make time for her, show interest in spending time with her.”

After all, you have something in common, you both love her son/daughter. “Show her that you value her opinion and that she matters to you both. Ask her for advice from time to time, help her to feel significant and included in your lives,” Jane concluded. 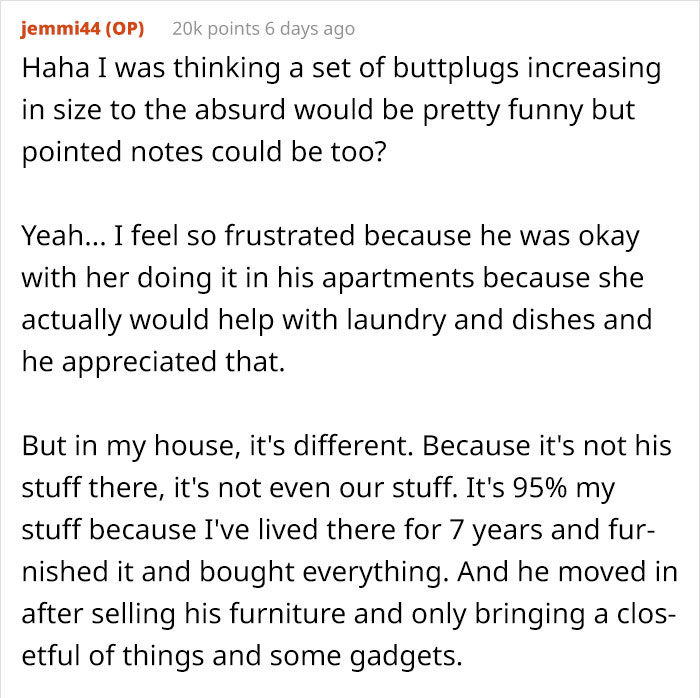 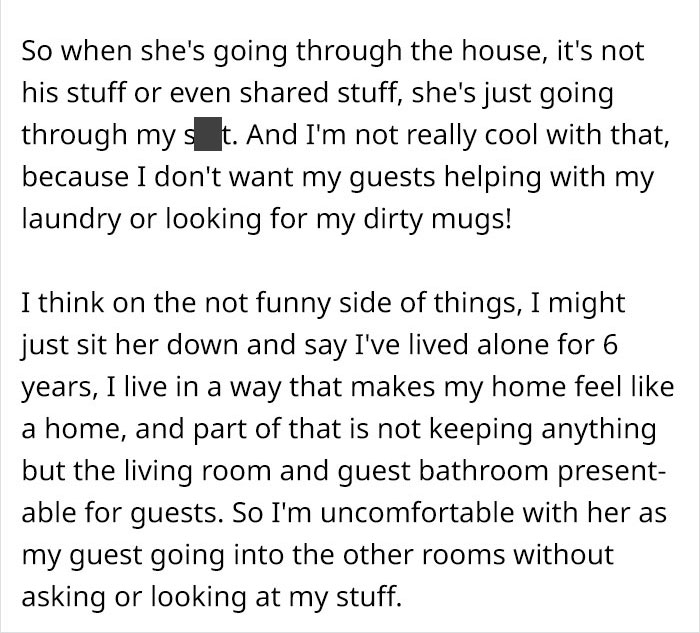 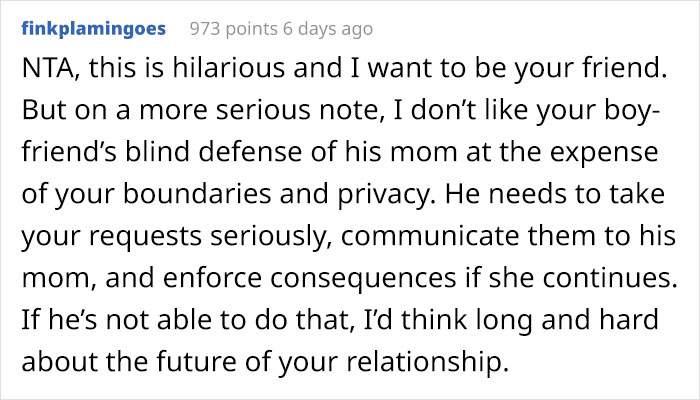 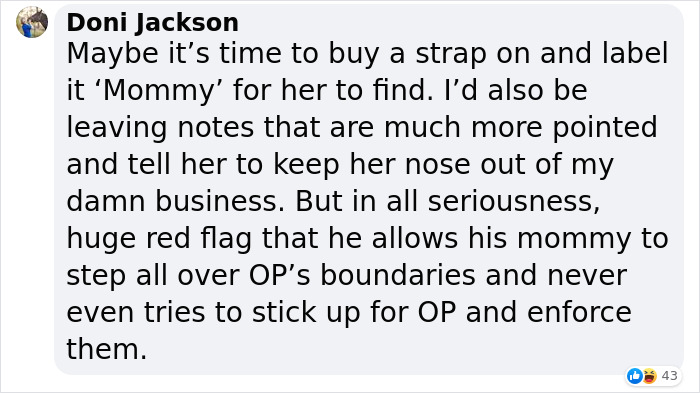 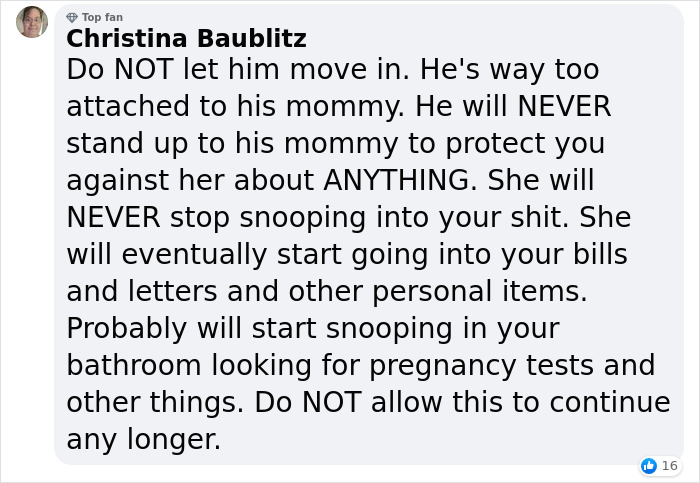 The post Woman Finds Out Her Fiance’s Mom Snoops Around Her Stuff, So She Leaves Hilariously Embarrassing Notes Around The House first appeared on Bored Panda.