There is no denying that our world is a big bad place and that a lot of that “badness” originates from people like ourselves.

Robberies, murders, harassment, the list could go on and on, but most of us go out of our way to find something good about humanity and the place we call our home.

However, what we’re often oblivious to is that the natural human state is a truly dark entity.

Because of our naivety, we are taught from an early age not to approach strangers. Yet, as we grow older, we start to worry less and less about our safety, even though, in reality, as we become more independent and separated from our families, no one will look out for us except ourselves. 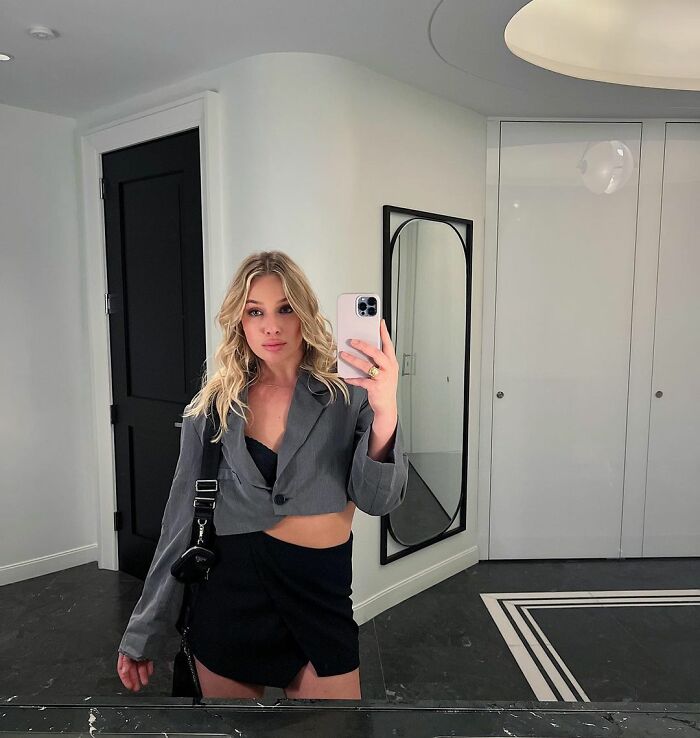 “Stranger danger” is a notion that we carry with us into our adult lives, and although encountering people that you’re not familiar with or sure of is inevitable, it’s vital to practice personal safety and do everything you can to be aware of your surroundings – or else you might find yourself in a similar scenario but with a much more tragic ending. 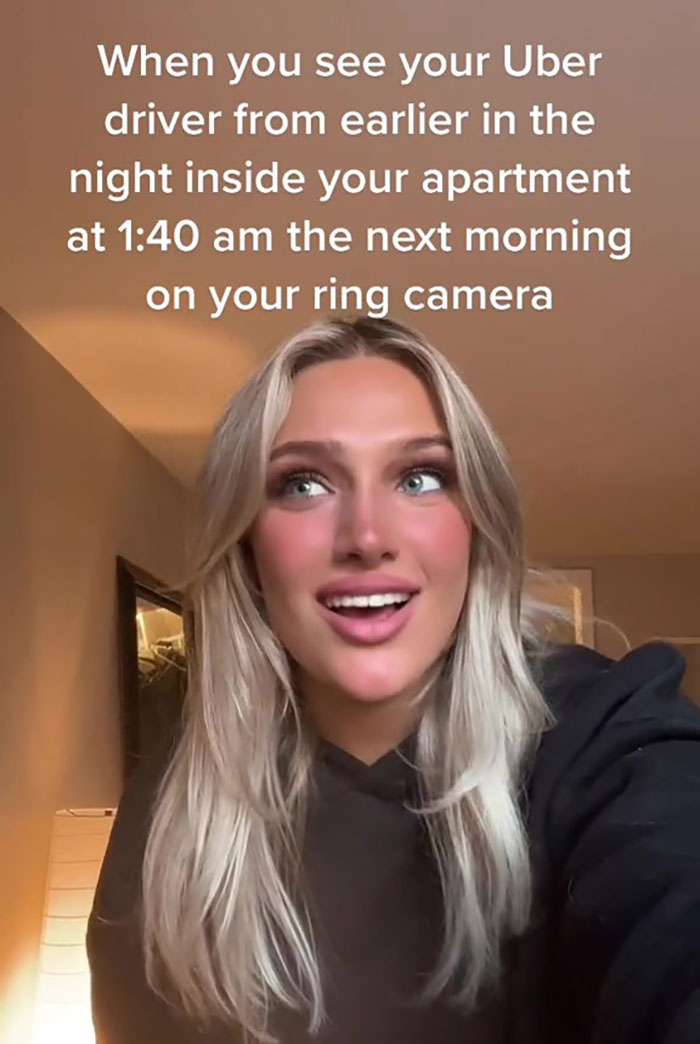 “I’m still in shock stay safe pls” – this woman turned to TikTok to recount a terrifying Uber encounter, which involved a driver breaking into her flat while she was fast asleep. The video series garnered up to 532K views, as well as heaps of concerned comments. 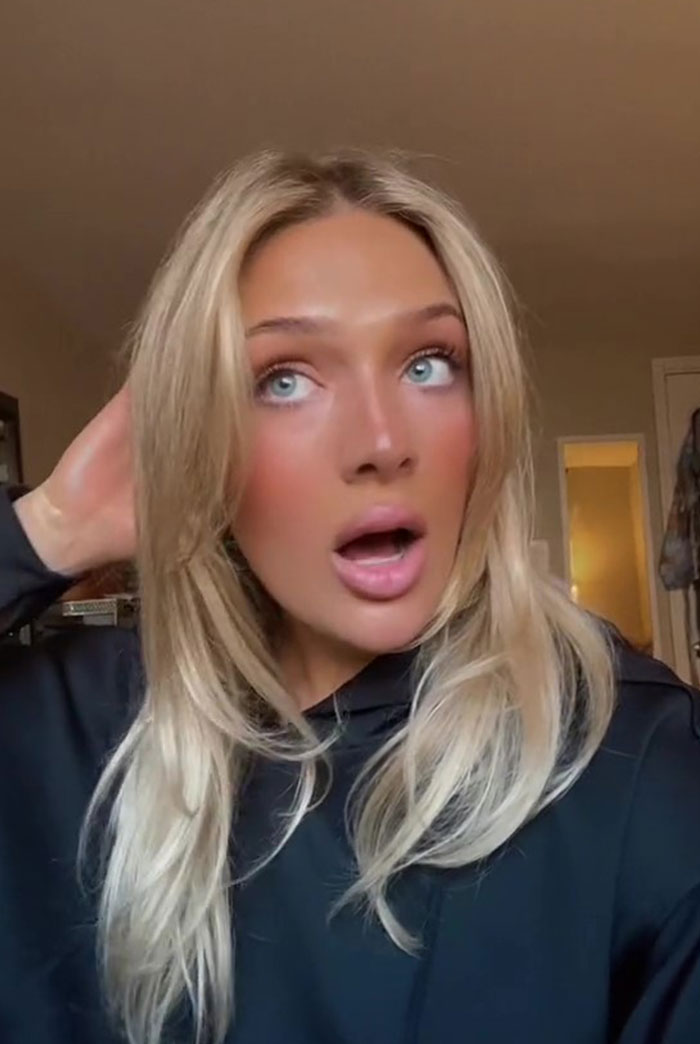 The Uber rider began her video by revealing that everything started out fine. The intruder picked her up together with her boyfriend and drove them home safely, without showcasing any type of weirdness. 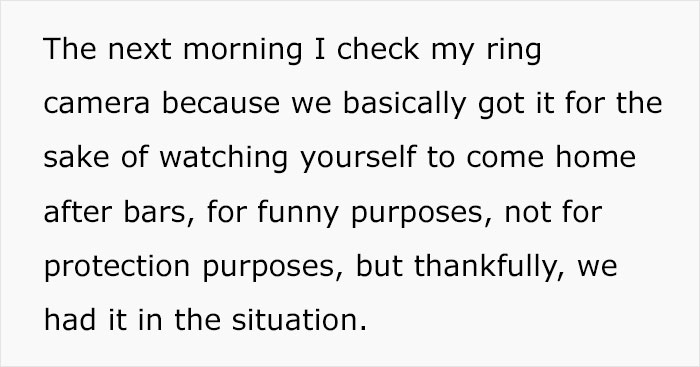 He dropped the couple off shortly after midnight, and they have the footage of them walking into their apartment on their Ring camera.

Upon arriving, they locked the door, made some food, and went to sleep.

The woman then added that they got the security camera for the sake of watching themselves come home from bars, and not for protection purposes – however, they were grateful to have it this time. 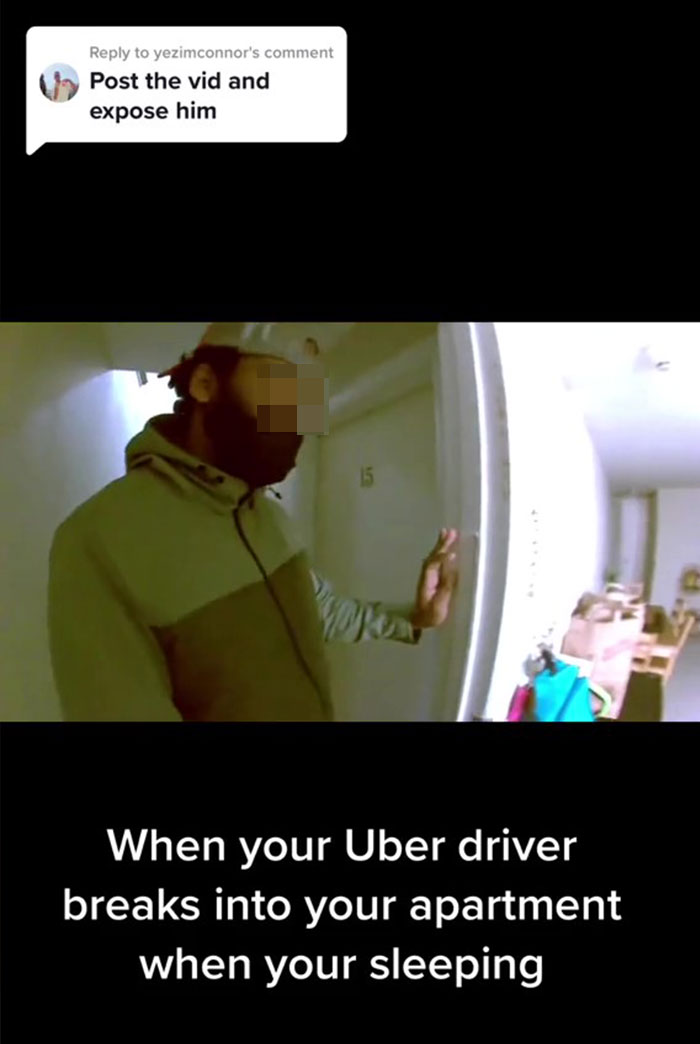 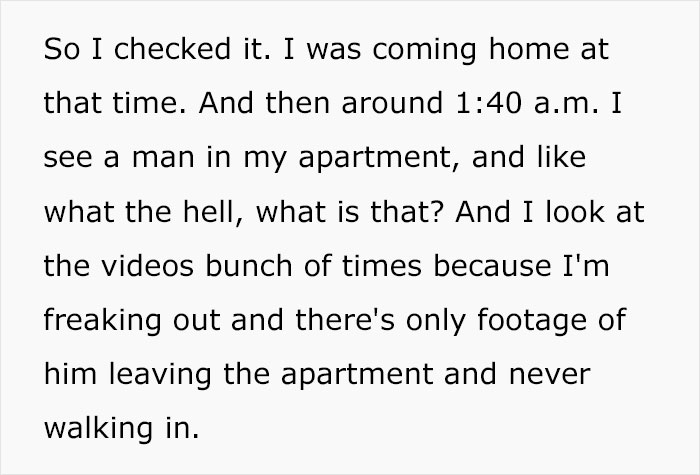 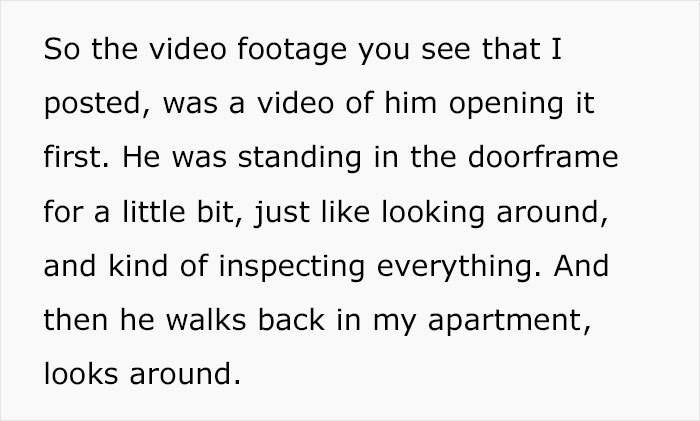 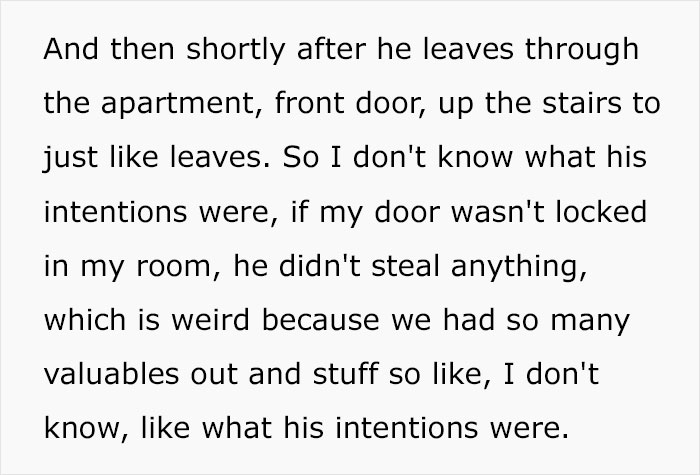 The woman checked the camera the next morning, and approximately an hour after she was dropped off, she saw a strange man entering her apartment.

Needless to say, the TikToker was petrified. She kept replaying the moment of the man standing in the doorframe, simply inspecting the place. Shortly later, he exited, leaving the woman wondering about his intentions.

After reviewing the footage, the woman walked out of her room and noticed that her living room window screen was cut open. Moreover, she saw some dirt marks on a chair, which suggested that the Uber driver had crawled through.

She doesn’t know how long he stayed in the apartment, but as soon as she learned everything, she notified the authorities. 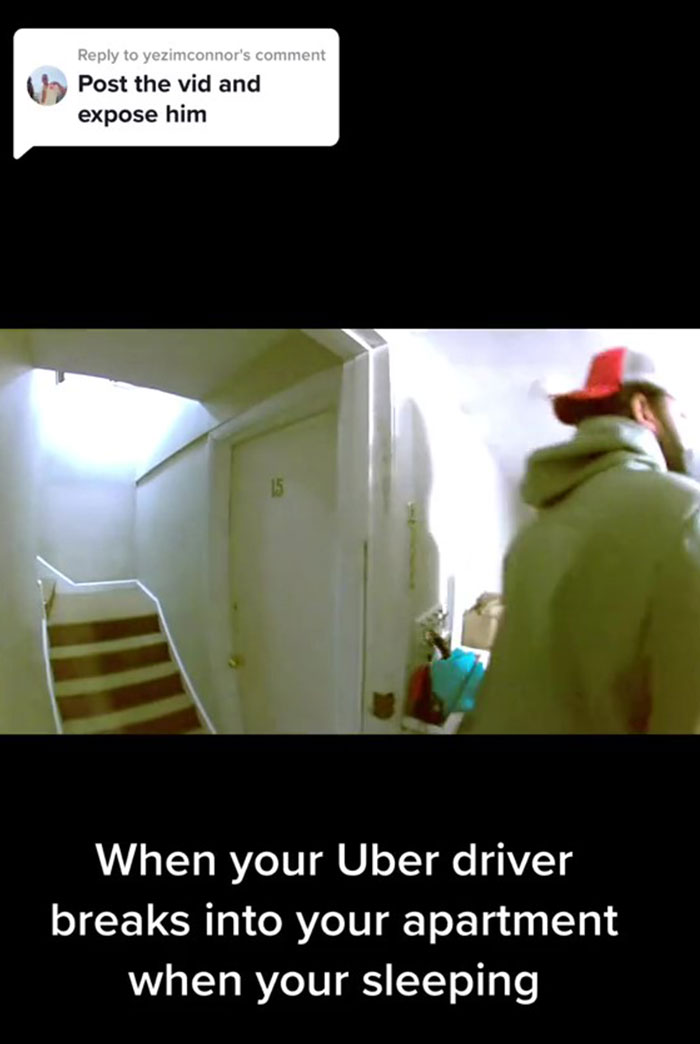 In order to determine whether the viral video is genuine, Bored Panda got in touch with Uber. Austen Radcliff, a safety communications representative, emailed us back with a statement from the company’s spokesperson: “This driver’s actions are unacceptable, and we’ve been in touch with the rider regarding her terrifying experience. The driver has been banned from the Uber app, and we are standing ready to help law enforcement in their investigation.” 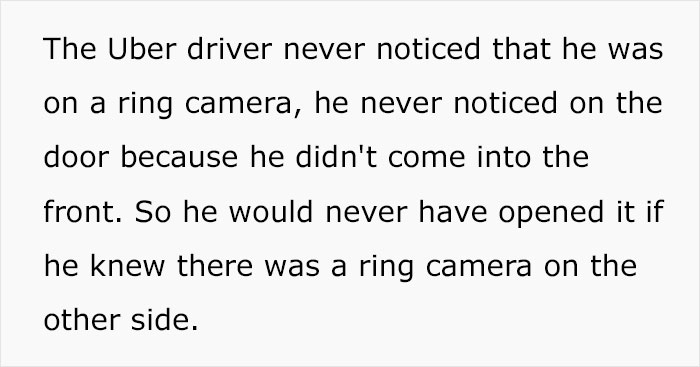 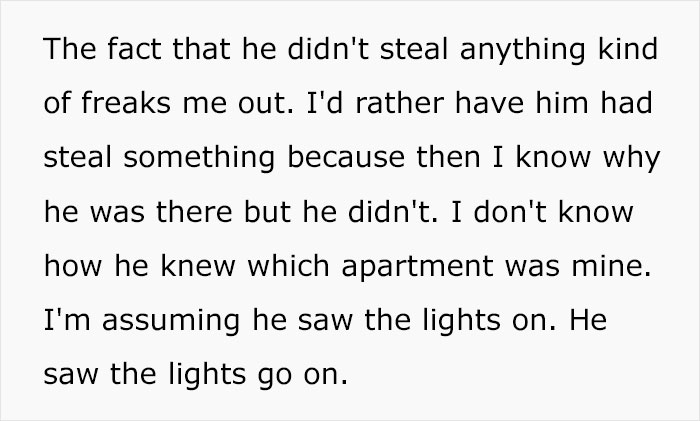 The woman also provided us with a few details about the company’s policies. Radcliff stated that Uber prohibits any post-trip contact between riders and drivers: “Contact should end when the trip or delivery is complete, unless it’s to return a lost item. Unwanted contact can be seen as harassment and includes, for example, texting, calling, social media contact, visiting, or trying to visit someone in person after a trip or delivery has been completed.” 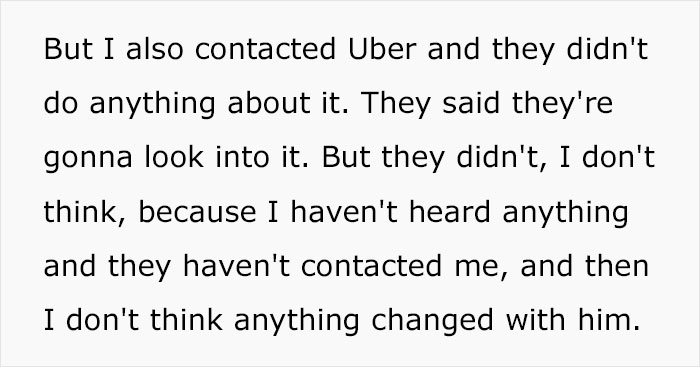 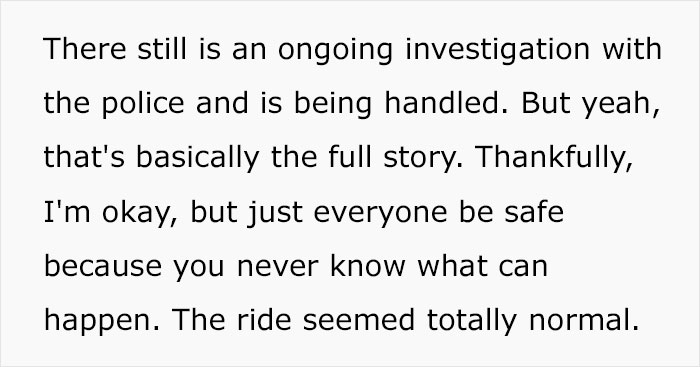 Finally, it was also declared that the company is deeply committed to the safety of riders, which is why they’ve developed a number of security features over the past several years: “Uber anonymizes riders’ and drivers’ phone numbers. After a trip ends, address details are removed from a driver’s trip history, and drivers only see the approximate location of a rider’s pickup and dropoff.”

As well as that, the organization also has a dedicated law enforcement team that stands ready to assist authorities with their investigations – therefore, it is hoped that tighter measures will be implemented soon to really guarantee the protection of customers that use Uber as their transportation method.

What do you think about this story? Have you ever been in a similar situation?

The post Woman Is “In Shock” After Catching Uber Driver Sneaking Into Her Apartment Hours After Drop-Off first appeared on Bored Panda.