Every parent gets tired of their kids, especially when they’re young and can’t sit still. That’s why some of them hire babysitters, so that they can have a day or evening off to enjoy themselves. It’s not always possible for everyone, so they just have to deal with it.

Or they could just leave them with a stranger for a while and take a couple of hours of rest. Actually, that is a very bad idea and parents should teach their kids about stranger danger, but Reddit user Mindfultherapist186 met an entitled dad that would rather a random person on a plane look after his children. She was that random person and luckily it all ended well.

A woman was confused when a dad stared at her for too long, and it turns out he thought that it would be a genius idea to leave both of his kids next to her on a flight 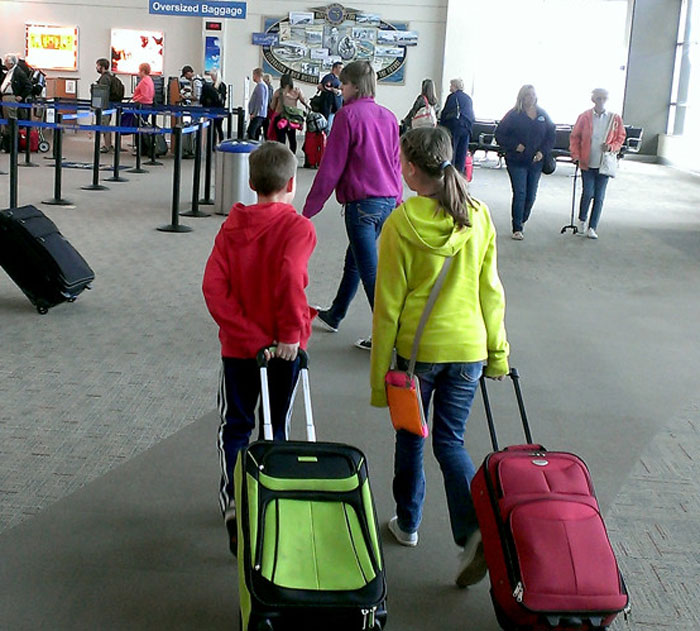 The story was posted in the entitledparents subreddit, a place where people share “all those wonderful stories of moms or dads thinking that because they have kids they are entitled to everything.”

The post was upvoted 13k times and actually kind of in a wholesome way, but let’s start from the beginning. The Original Poster (OP) was flying from New York and in the TSA (Transportation Security Administration) line, she was standing behind a family of four with two boys. 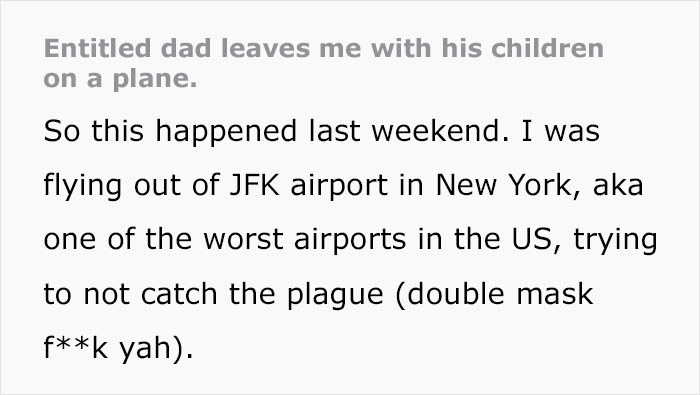 The OP was standing in a line behind a tired mom, a dad focused on the mom and two of their children being loud

The OP noticed that the mom was completely tired. She was probably really tired as she was sitting on the suitcase and the dad was holding her so she wouldn’t fall off while he was wheeling her.

Because the dad was taking care of the mom, their kids were causing a little bit of a ruckus. As the OP, who now works as a therapist, previously worked with kids with special needs, she thought she could make the kids calm down a little bit.

She talked with the children and managed to make them have a quiet conversation, which made the woman standing behind her thank her 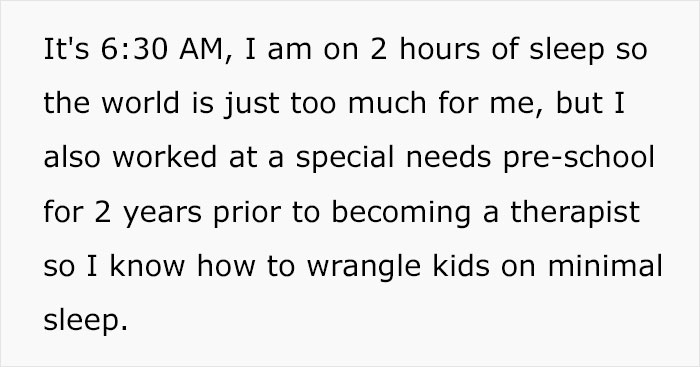 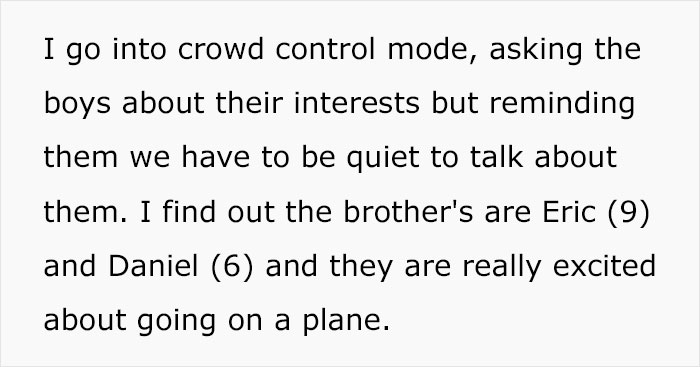 She successfully got the boys talking about Minecraft in a calm conversation and also got to know that one of them, Eric, was 9 and the younger one, Daniel, was 6. The person who was standing in line behind the OP thanked her for intervening and giving all the people standing in the line a little bit of peace. They also chatted a bit, mainly about Mindfultherapist186’s experience in a school for children with special needs. The interaction with the two boys doesn’t end here.

Turns out, the one of the kids had a seat beside the OP and the other was for the dad

After quite a while, passengers were boarded onto the plane and the OP found her seat. She noticed the tired mom was sitting by the window and already sleeping, but the dad was coming her way with Daniel and Eric.

Daniel sat down next to her and that was the moment when the dad remembered hearing bits of conversation about the OP working at a special needs school as he stared at her for a minute. When the woman asked if there was a problem, the dad thought it would be a good idea to swap places with Eric, so he handed him the boarding pass and quickly went to sit in the row with his wife. 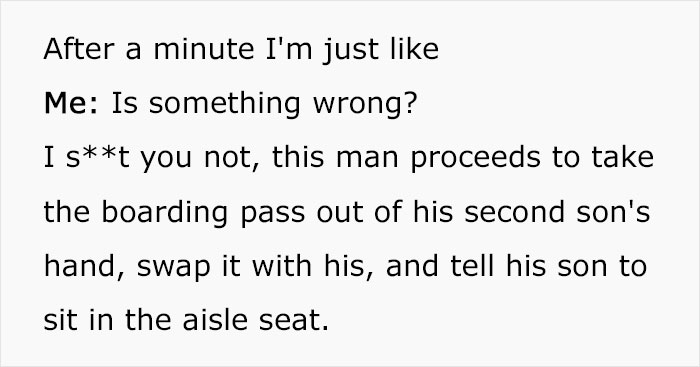 But when the dad came, he remembered he heard her talking about working with kids, so he just left the other son with her too

The OP was at a loss for a moment until the kids started asking her questions. The woman didn’t have the energy to find out why she was left with children that were not her own and just went with it and turned on the TV for the kids before going to sleep.

It seems that the kids were kind-hearted as they told her to have a nice nap and left her a drink and snacks for when she woke up.

The OP was too tired to figure out what was the deal with the dad and the kids, so she just turned on the TV for them and went to sleep

The boys were watching Moana the whole time, but about half an hour before the landing, the mom of the boys woke up and kind of freaked out, thinking her husband had left them at the airport. 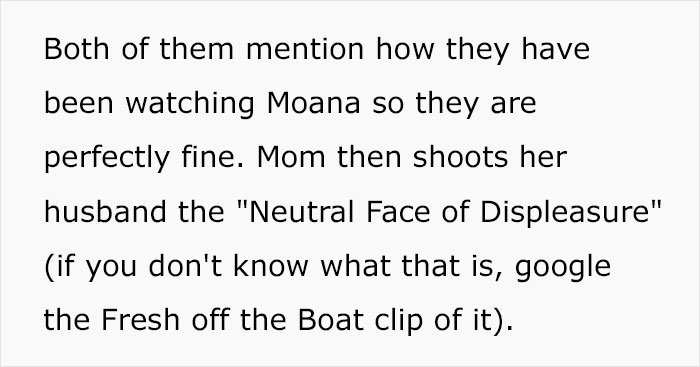 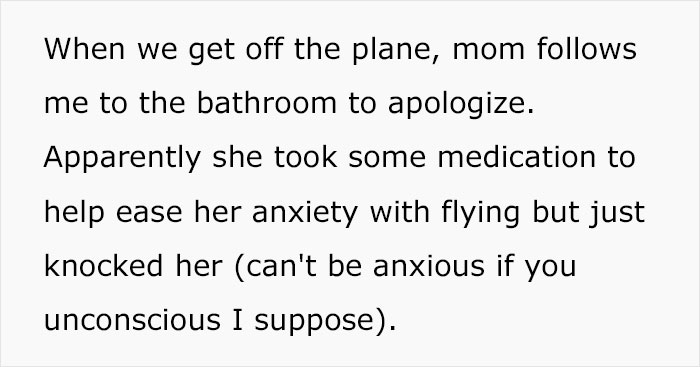 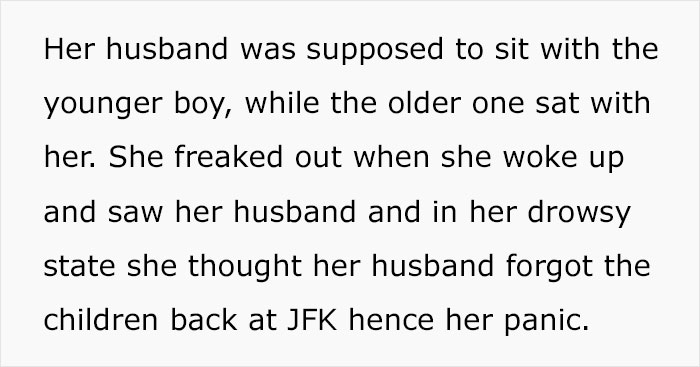 The mom apologized to Mindfultherapist186 and made her husband do the same. She explained she was sleeping because she took some medicine to calm her anxiety which goes up when flying. The OP overheard that the whole time they were walking to the baggage claim, the mom was talking about how strangers and crowded places can be dangerous.

Nothing bad happened and from the description the OP gave, it seems that the two boys are sweet children. When they parted their own ways, Daniel gave OP a heart folded out of a brochure, so even though they were being a little loud at the beginning, they really just needed a little bit of a reminder of how to behave in a public place.

Before parting in different ways, one of the boys gave a farewell gift to the OP and that just showed how kind-hearted the two boys were

The dad not only was irresponsible but also entitled to think that he has the right to just make another person watch over his kids. Being a parent is tiring and they do need help from time to time, but a random stranger on a plane is not a solution.

What do you think of this story? Do you think it’s weird that the first thought the mom had when she woke up was that she was living in the movie Home Alone? Do you think the dad wouldn’t have done it if it weren’t for the fact that he heard the OP worked with children? Let us know your thoughts in the comments!

People in the comments were worried that the dad didn’t understand the danger of leaving his kids with a stranger and were glad that this time, the story had a happy ending 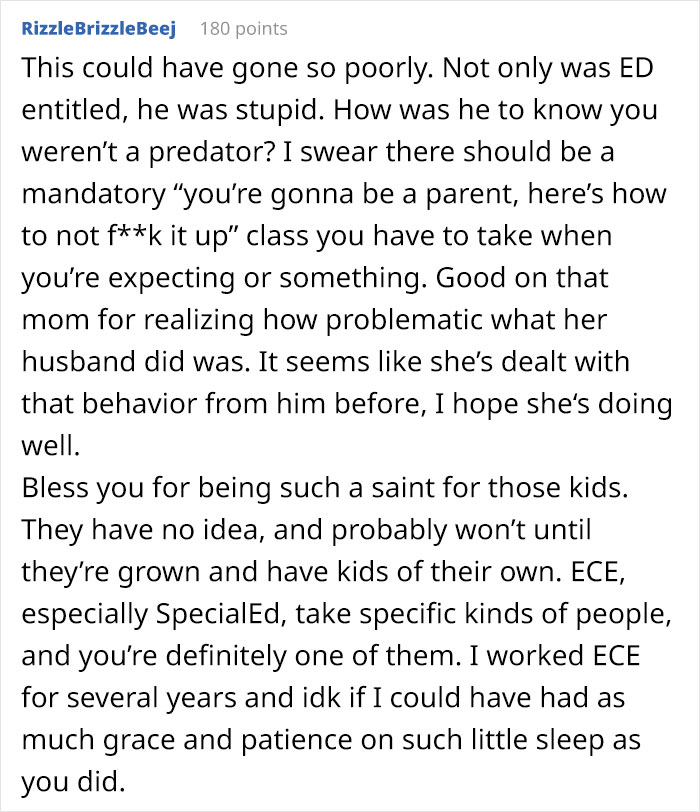 The post Woman On A Plane Realizes This Dad Just Left Her His Children To Look After During The Flight first appeared on Bored Panda.