All I want for Christmas is… a stocking with my name on it! Hanging alongside all of the others on the fireplace! Sounds like such a simple dream, doesn’t it? Well, it’s caused quite a bit of havoc for one family, as we’ll see here today.

A man took to Reddit to ask for the opinions of the r/AmIthe[Jerk] community (seems to be the internet’s own confession box, doesn’t it?) when a difficult situation made itself known just before the wonderful festivities meant to bring a family together.

His wife wanted to include her son in the family’s yearly traditions, yet was met with backlash, as the man’s side of the family was yet to feel comfortable enough to fully accept said stepson into their midst. It’s truly heartbreaking, but please, dear reader, don’t downvote—we’re just here to share the most interesting stories!

Leave your thoughts on this whole ordeal in the comments section below, and tell us—what would you have done differently? If by the end of it all you’re craving more stories like this, then feel free to check out this one right here. Now let’s dive into it!

There’s nothing we want more than to feel loved and welcome, especially when it comes to family traditions, yet in some cases that is a difficult feat to accomplish 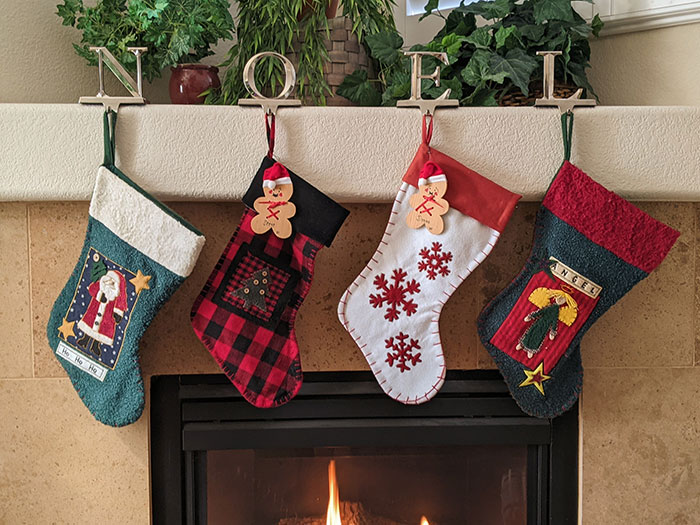 Many of us look forward to Christmas dinner as the one occasion to forgive all wrongs and embrace the spirit of love and gratitude. An occasion to spend with those closest to us, our beloved ones, and the ones we call family. One thing is for certain—no one wants to feel like an outsider during this celebration.

A difficult situation was recently described by one Reddit user, named Throwra53456, who came to the subreddit r/AmIthe[Jerk] for some advice and an outsider’s perspective to answer one big question—was he in the wrong for calling his wife “ridiculous” for refusing to spend Christmas with his family, as they would not put up a Christmas stocking with her son’s name alongside the other kids’ ones?

Before we dive in, let’s have a quick look at the lore which started the tradition of Christmas stockings in the first place. According to the Smithsonian Magazine, stockings were hung near the fireplace, awaiting a visit from Santa Claus, as far back as 1823. The most common legend revolved around a recently-widowed man and his three daughters.

They were having a tough time financially, the father worrying about his daughters’ futures. St. Nicholas was wandering through the town where the man lived and heard the villagers discussing that family’s plight. So he slid down the chimney of the family’s house and filled the girls’ recently laundered stockings with gold coins. Now that that’s done, let’s get into the issue. 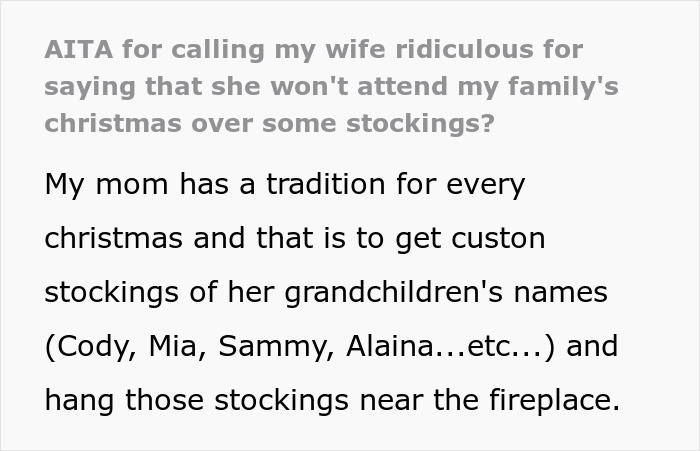 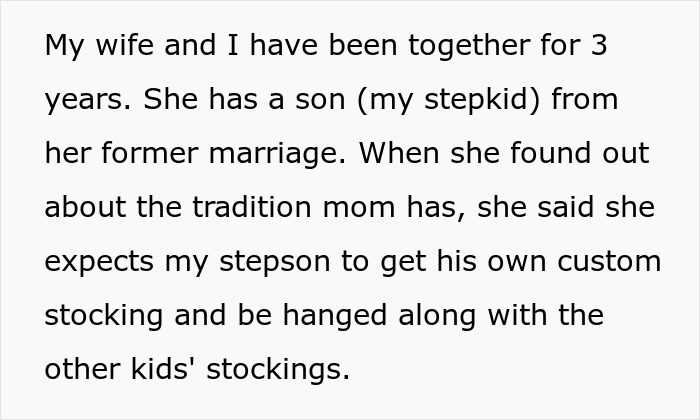 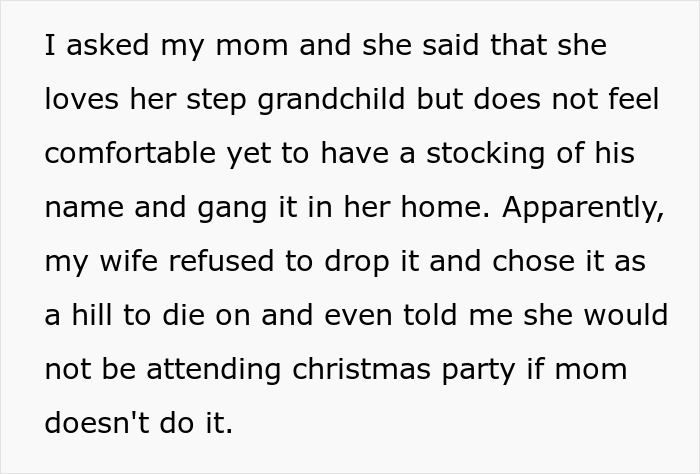 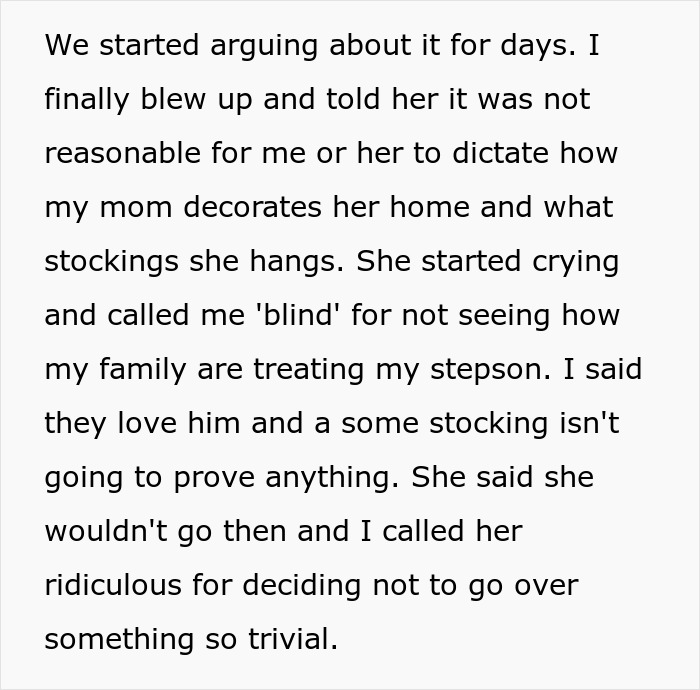 This has divided the family, with the mom sticking by her son. To one, they’re just stockings, to another, it’s the realization that they’re not yet a part of the family 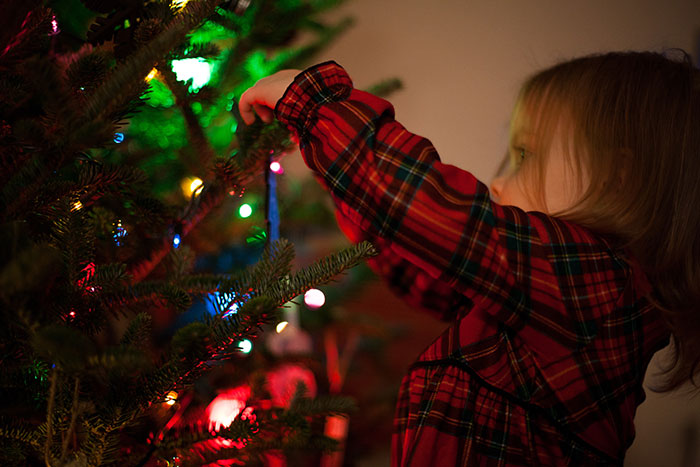 When traditions meet change, there’ll always be disagreements. Sadly, in this case, it’s at the expense of a 9-year-old boy. Although we like to acknowledge all sides of the story, it’s very difficult not to point out the shortsightedness of the man when it comes to his stepson’s feelings. Yes, dictating how his mother should or should not decorate her home would not be welcome in any case, yet this feels different—it’s a purposeful exclusion of a child from family traditions.

Let’s take a step back for a second and assess the core components. The relationship between a child and their new stepparent can be both rewarding and challenging, requiring a lot of patience, compromise, and effort on both sides. Just like with any new introduction, it takes time to build trust and confidence in a person, which is made very much more difficult when you suddenly have to live with said stranger.

One way or another, the stepparent is an outsider, and so is the stepchild. There are years of shared history, memories, experiences, and connection between members of the biological family that the newcomers will have never been a part of. However, one cannot live in a house of memories; the present is now and the future is built on it.

Karen Young shared her experiences of being a stepmom, advising all involved in this relationship to let go of the fantasy. “An abundance of research has confirmed that unhappiness is caused by the distance between expectations and reality,” she said. “It’s not so much the situation that causes distress but that the situation is different to what’s expected.”

It’s not going to be the same as it was. That is the main point here, but as obvious as it may seem, it’s probably the most difficult to accept for everyone. Feeling like an outsider—as well as jealous, lonely, resentful, confused, and inadequate—is, sadly, normal during this transition period. You’ll probably experience hostility, indifference, or rejection

In her extensive work, Dr. Patricia L. Papernow has found that stepfamilies take about 7-12 years to adjust and to exist as a healthy, well-functioning system. Quicker families might do it in four, but some families never really get there, and the hardest part falls on the children. They oftentimes have no say in who comes into their lives but are expected to tolerate new family dynamics.

Constantly empowering the child through integration and involving them in day-to-day activities, as well as celebrations, is the go-to way of building a strong family unit. In this particular case, it seems as though the family has chosen to feel comfortable over choosing to accept the fact that they need to shift their traditions to meet the needs of all the family members, whether long-standing or newly joined.

It’s a story full of nuance and complex perspectives, but if we were to simplify it—don’t alienate your stepchildren from such important celebrations as Christmas, because you’re widening the gap between yourselves, which will make it significantly more difficult to ever bridge.

The r/AmIThe[Jerk] community has deemed the man to be the jerk in the situation, although there were those that agreed with his point of view, as well as his actions. Let us know your thoughts in the comments section below, and tell us what you would have done differently in this situation.

I hope your Christmas stockings are gonna be full to the brim with lovely little gifts and no drama. See you in the next one!

The internet, however, was less divided in deeming the man to be the jerk in the situation, especially since he seemed to completely disregard his stepson 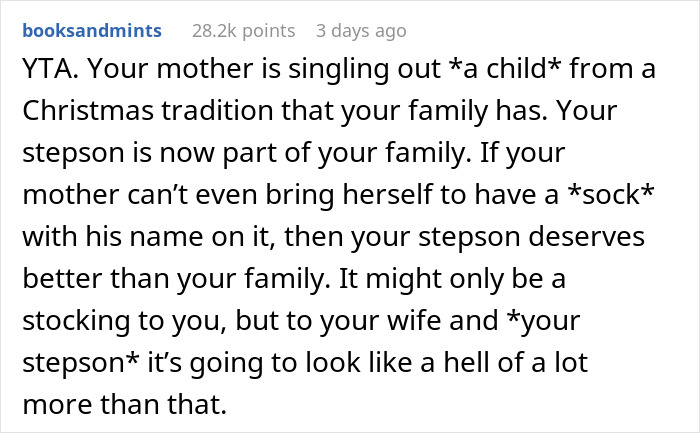 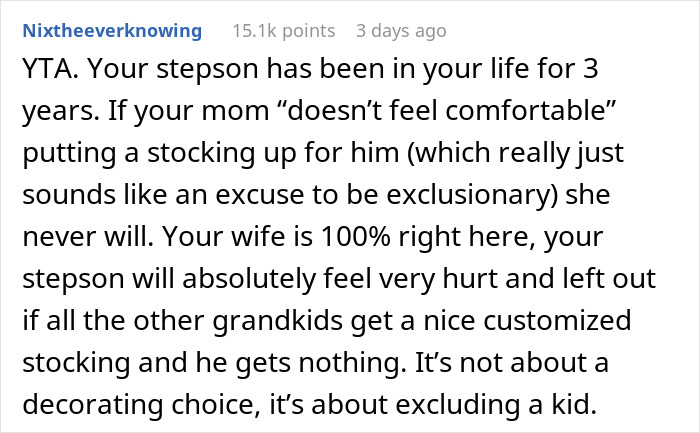 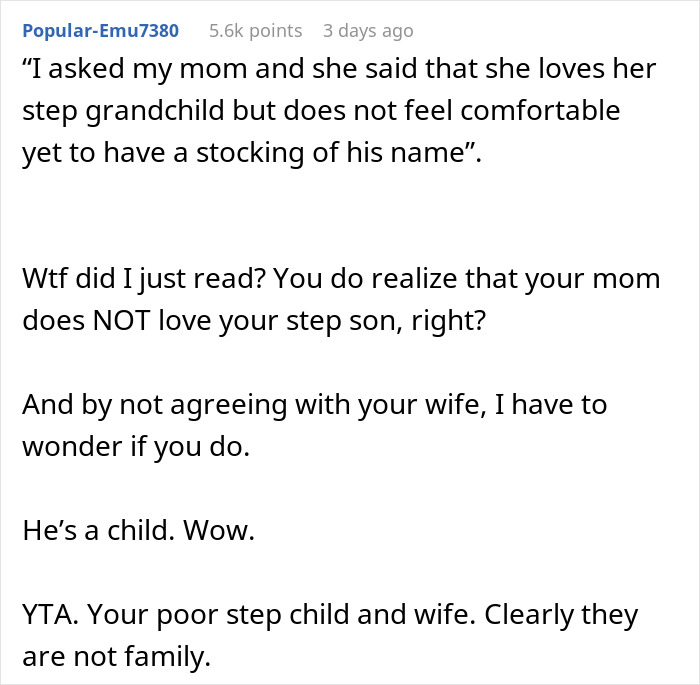 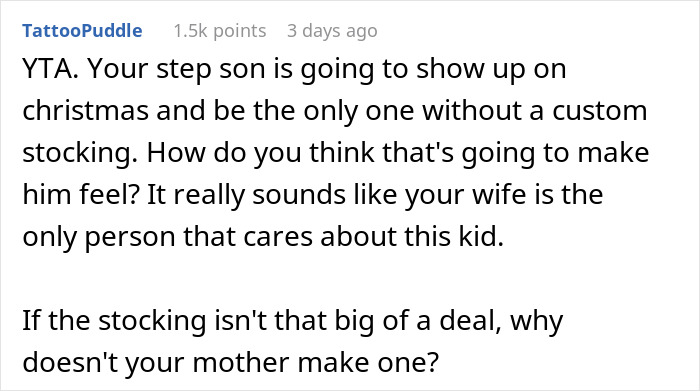 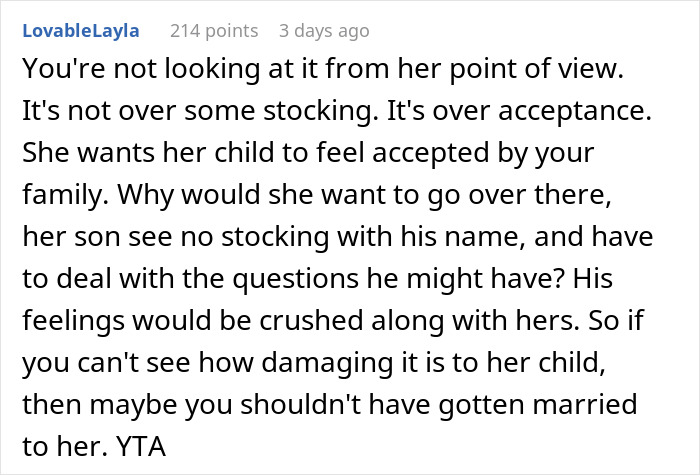 There were those that took the man’s side, believing that his wife overreacted over something “so trivial.” Let us know your thoughts in the comments! 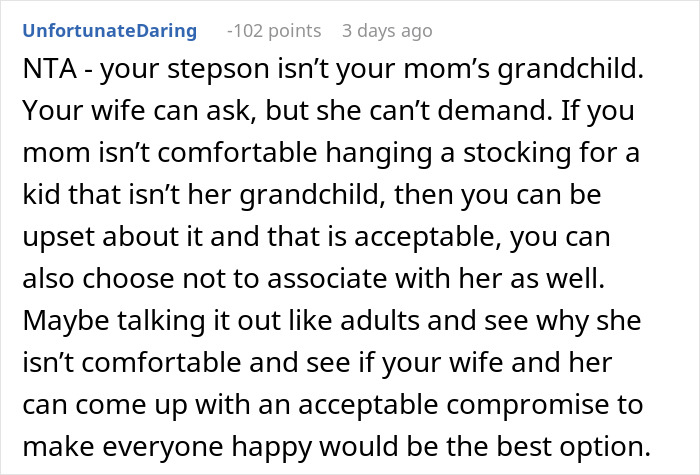 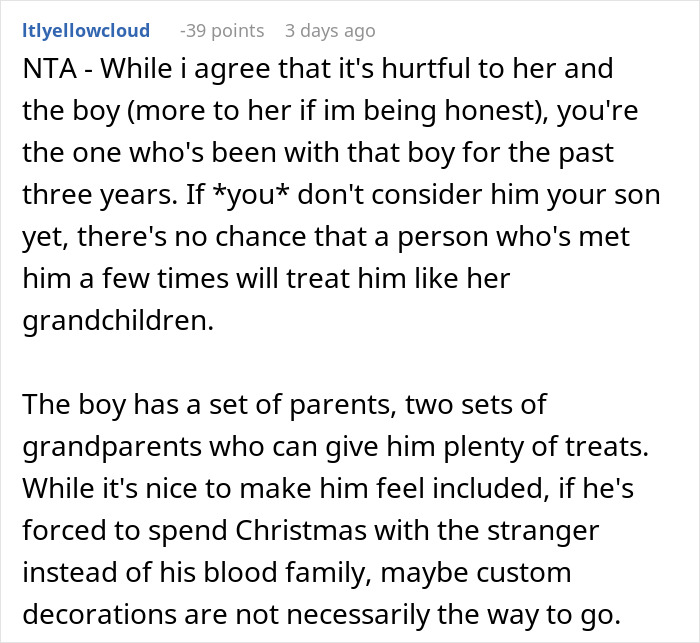 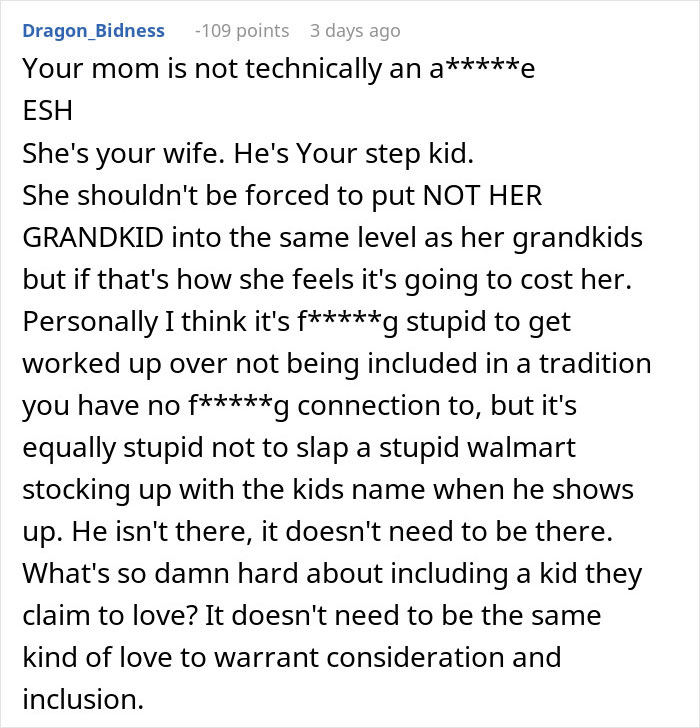 The post Woman Refuses To Attend Christmas Party If MIL Continues To Single Out Her Kid, Her Husband Deems It “Ridiculous” first appeared on Bored Panda.