You know what’s the most annoying thing about entitled people? No, not even their behavior, although it in itself causes anger in those who deal with them. The most annoying thing is their absolute, perfect confidence in their own rightness. Their incredible ability to manipulate your mind can make you feel like an abuser if you do not succumb to their demands – even the most outrageous ones.

Just imagine – you are simply trying to defend your own personal boundaries, which this person is trying to violate (sometimes in a very rude way), and they turn the situation literally inside out, making you suffer later. After all, you, it turns out, offended a person. And if it’s one of your relatives, then it can last a very long time.

A similar situation happened to the author of this post in the AITA Reddit community, which in just a few days collected about 14.2K upvotes and more than 650 different comments. This time, the father-in-law of the Original Poster is the extremely entitled person here. 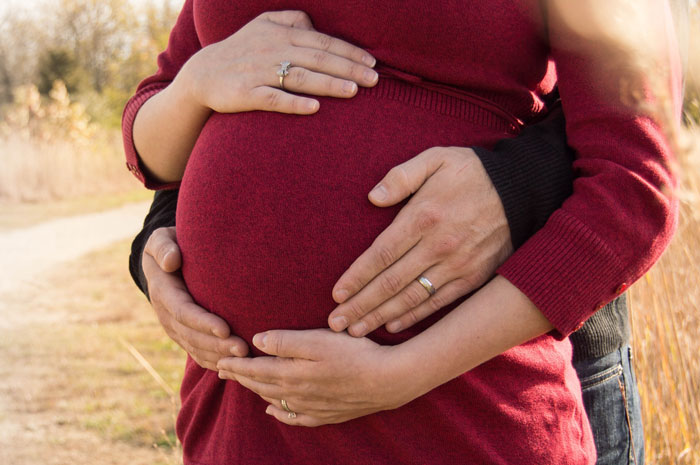 So the OP and her husband recently hosted a family dinner to announce her pregnancy. All the closest relatives of the couple were invited to the gathering, including her husband’s father. The problem was that, according to the OP, her husband wasn’t on the best of terms with his dad. True, his younger siblings are wonderful people, so the couple literally have to keep him around. 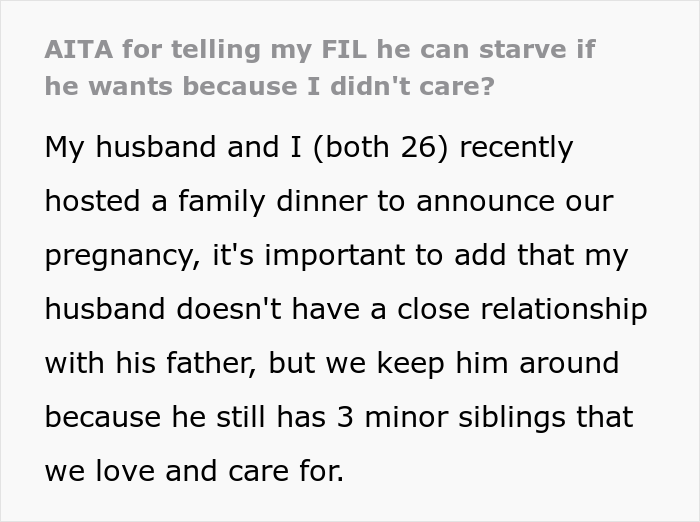 As the OP herself admits, her father-in-law is one of those people who still think women should serve men at dining times – like, he has to be served first because he’s the breadwinner or something like that. The OP has trained herself to usually ignore his behavior, but this time things got out of hand. 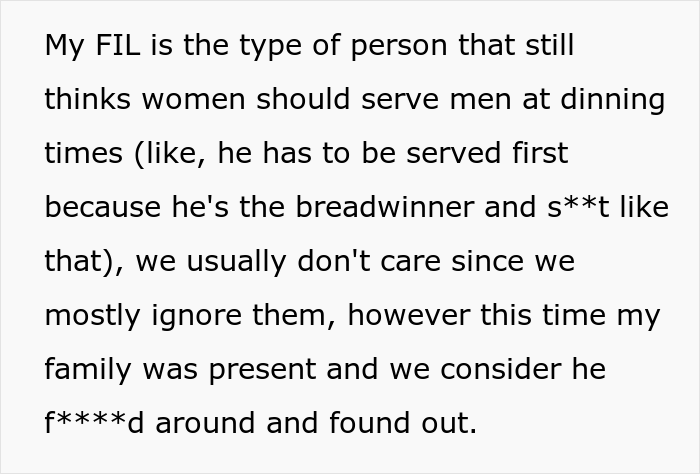 The fact is that the OP’s father was also present at the dinner, with whom, on the contrary, she has always had an excellent relationship. Dad raised them with an older sister from early childhood, when their mother passed away, and always supported his daughters. The man had a damaged nerve in his right arm, so it was difficult for him to use it.

To help him, the OP’s sister bought him a special Parkinson-friendly dinner set; however, for instance, holding a big spoon for serving is still too difficult for him, so he often needs other people’s help. 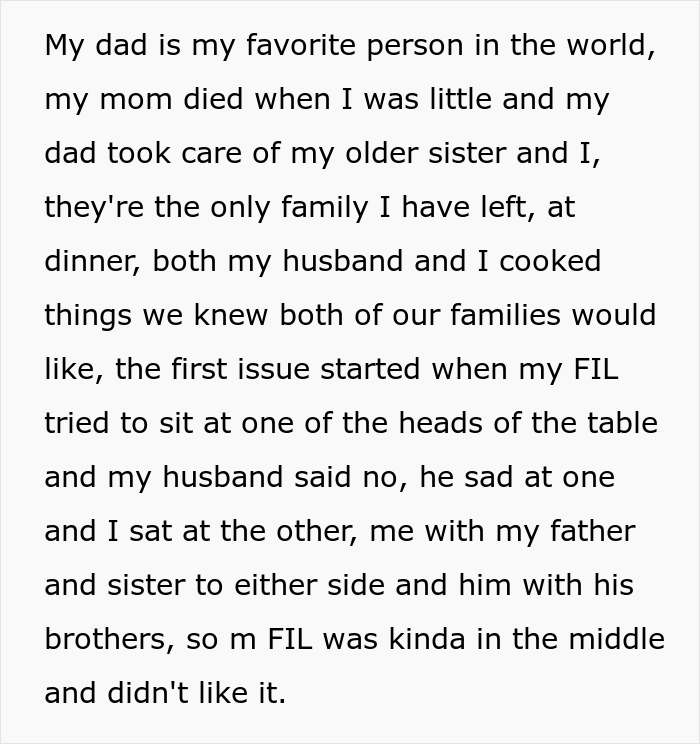 The OP and her husband cooked all the relatives their favorite meals and hoped everything would go well. However, everything did not work out from the very beginning… First, when everyone was seated at the table, the OP’s FIL expressed his intention to sit at the head of the table. To this, the OP objected that she and her husband are hosts, so they will sit there. The entitled relative was put in about the middle, which he immediately did not like. 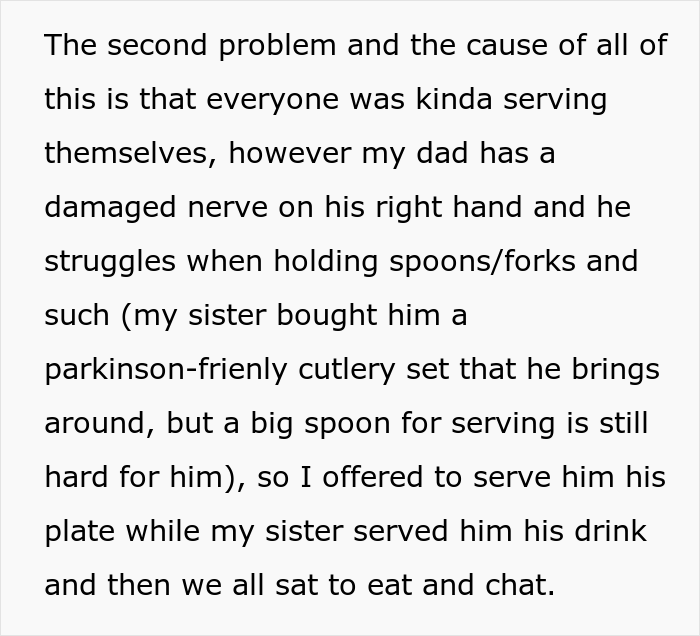 Then the OP decided to help her father to serve his plate, because she saw how difficult it was for him to handle a heavy spoon. When she finished, her FIL demanded that “the hostess serve his plate as well” since she had helped her father. The OP answered that her father has an injured hand, and her FIL was just fine, so he could do it himself. 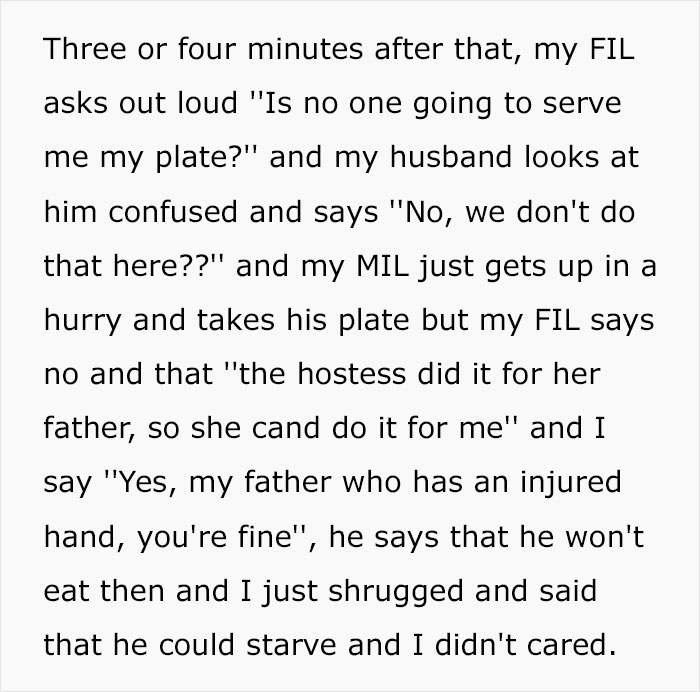 Then the man told the OP to serve his plate as she previously helped her dad, who has an injured hand

The MIL took her husband’s plate and tried to serve it, but he stopped her and stated that if the OP did not serve him too, then he refused to eat at all. The OP broke down and said that if he wants to starve, that’s his own business, and to be honest, she doesn’t care. With these words, the father-in-law and his wife left the table and went home.

The most annoying thing, says the OP, is that her husband and other relatives fully supported her – but her own dad said that she her behavior was ugly and advised her to apologize to her father-in-law. This, perhaps, upset the woman literally the most.

To determine why this is happening, we turned to Irina Matveeva, a psychologist and certified NLP specialist. “There are two types of manipulation – unconscious and conscious,” says Irina. “With unconscious manipulation, a person chooses this type of contact simply because they do not know how to satisfy their needs otherwise. This happens unplanned, instinctively, literally as a habit.”

“But when a person realizes that they are acting ugly and cruelly, but still does it to achieve their goal, this is conscious manipulation, and this is much worse. It seems to me that in the story described, the father-in-law manipulated the opinions of others unconsciously. For example, using a threat of refusing food if the OP does not do what he wants is a classic unconscious manipulation,” says Irina Matveeva. 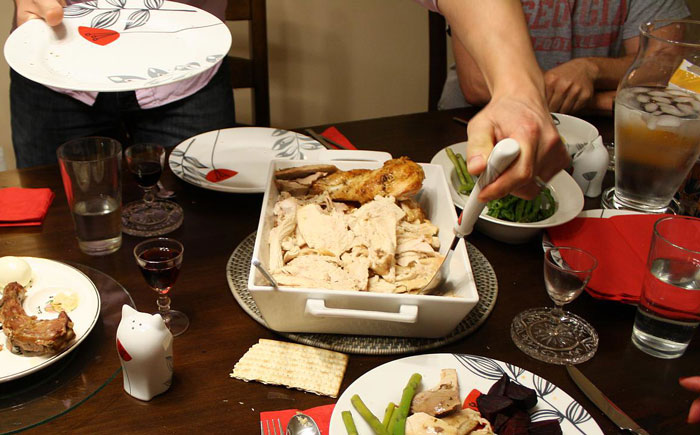 “By the way, you can easily see that a man is used to communicating in this way with literally everyone around him. For example, his wife is trying to restrain his behavior by serving his plate instead of his DIL. Yes, she tried to soften the effect, instead of fighting it – but this really doesn’t work,” states Irina. “Given that the man, judging by the fact that he already has at least one adult son, is already aged, it is advisable to turn to a psychoanalyst here. However, judging by his behavior, he is unlikely to even agree to this.”

We must say that the commenters also massively supported the OP. In their opinion, the OP’s father-in-law should know that not everyone supports his sexist views, and that in someone else’s home, he has absolutely no right to behave this way. If his wife is willing to obey him, that’s her choice, but the OP remains the mistress of her own house, setting her own rules. 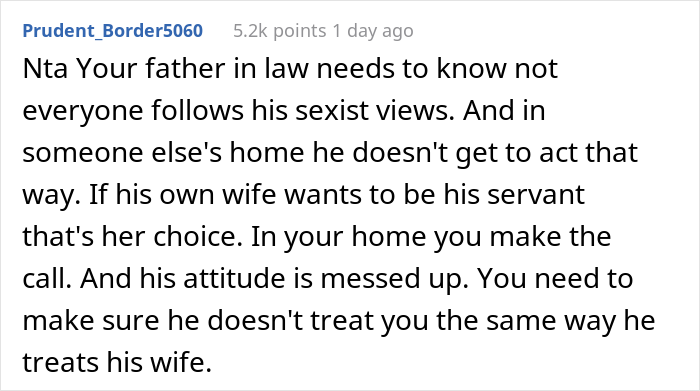 Some people in the comments believe that the OP’s father simply assumed that she would smile and serve, not wanting to escalate the conflict. However, her FIL was rude and disrespectful in her own house anyway, also making the OP’s father feel uncomfortable about his own health issues. That could be the reason for his reaction. In any case, the commenters are almost certain that the woman’s dad will soon sort things out and also take her side. 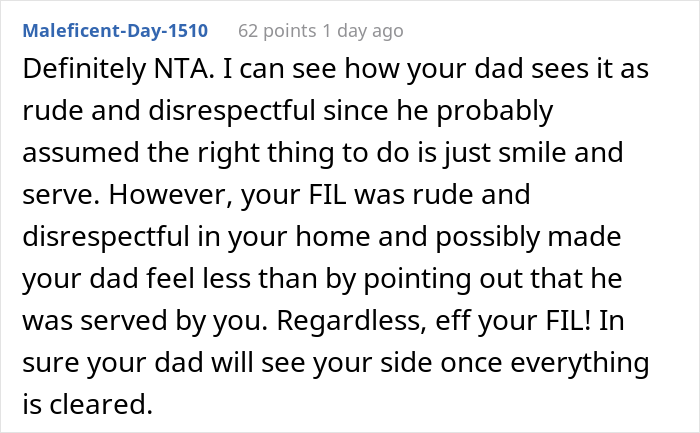 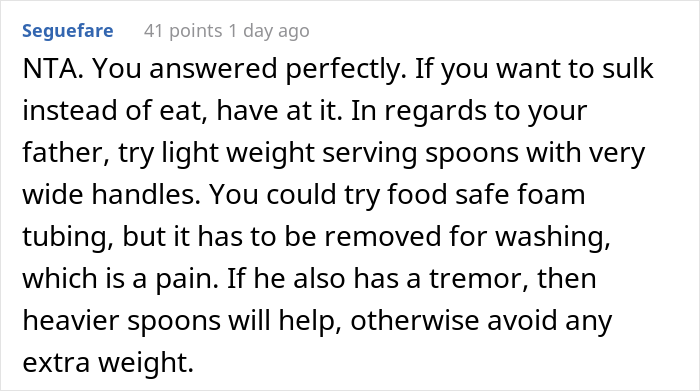 We’re pretty sure you have something to say about this tale, so feel free to write what you think in the comments. In the meantime, consider your comment. You can read, for example, our selection of opinions on which people should be considered entitled. Just believe us, this is also very interesting.

The post Woman Tells Her Sexist Father-In-Law That He Could Starve If He Wanted But She Won’t Serve Him Dinner, Husband Supports Her first appeared on Bored Panda.