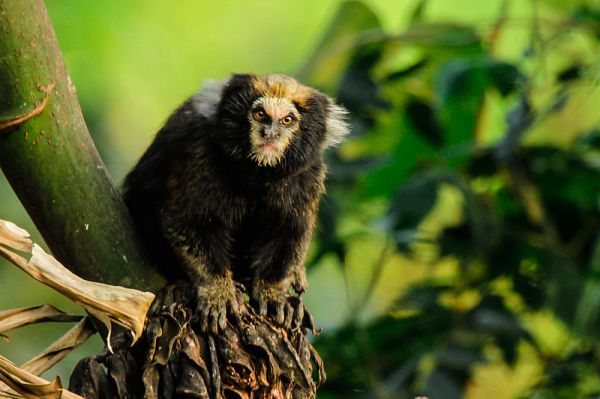 Marmosets are adorable, and they are all over Brazil’s southeastern seaboard. The most common are of the species called the common marmoset (Callithrix jacchus), which you’ve seen plenty of pictures of. But strangely, they are not native to southeastern Brazil- in fact, they are an invasive species in that area. The native species is the buffy-tufted-ear marmoset (Callithrix aurita), which is one of one of the world’s 25 most endangered primates. Wildlife counts can be deceiving, as common marmosets will mate with buffy-tufted-ear marmosets, leading to hybridization.

This is a good time to mention that there’s one more thing working against the buffy-tufted-ear marmoset: Unlike the common marmoset, it isn’t cute, at least not by most standards. With a perma-sneer and menacingly orange eyes, the tiny primate looks like it woke up wearing yesterday’s makeup. Because of its haggard countenance and standoffish nature, staff at Carvalho’s organization lovingly call it “the little goth monkey.” (The Portuguese moniker is a tad kinder: sagui-vaverinha, or, “little skull monkey.”)

This leads to a situation in which the public loves an invasive species more than the natural species in an environment, and makes conservation of the buffy-tufted-ear marmoset rather difficult. Read about the plight of the “skull monkey” at Atlas Obscura.