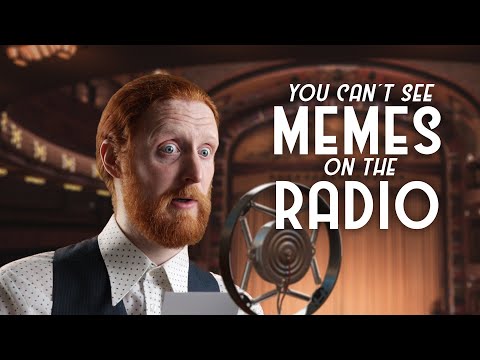 Part of telling a story on the radio is describing a scene, but that can’t be the punch line. It just won’t come off right. Alasdair Beckett-King (previously) channels a 1940s radio announcer, Edmund Hillary-Swank, sharing modern internet memes, which doesn’t quite have the same impact as seeing them. Bonus: commenters at YouTube have some more examples.

My goodness, there is what appears to be a house fire, in which a dog sits. He proclaims the situation to be fine, despite the calamity. It will not remain fine for much longer, I wager!

Here we have a meme of popular songwriter and entrepreneur Aubrey Drake Graham. In the first image he appears to be uninterested, if not actually offended, by a picture of Rowan Atkinson, but in the second image he is pointing approvingly at an unidentified, bearded ginger.

It’s quite the zoetrope, it appears to be a frog, green in colour, pedalling a unicycle, with the caption, ‘oh gosh, what do we have here?’

I beg your pardon, dear listeners, I’ve just been informed our program is being visited by the Duke of York. My my, I wonder to what we owe such a pleasure. Let me just open the door for him and — what?? You’re not the Duke! I’ve been bamboozled by Lord Astley yet again!

Blimey! It appears this strapping young fellow has produced a stick, only to insert it into the spokes of the very velocipede upon which he is riding. No mean feat! It is no surprise that he makes a most spectacular fall. Yes, a very peculiar man indeed; he now seems to lay blame on all his surroundings, even though his predicament is no doubt of his own volition.