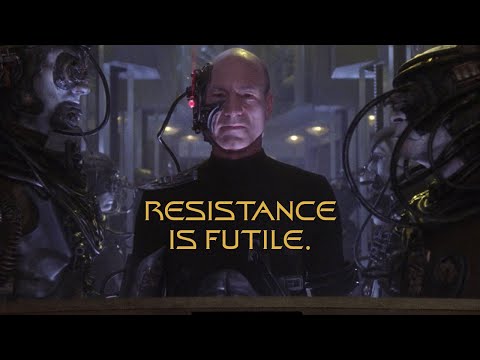 Here’s another Star Trek supercut from John DiMarco (previously at Neatorama) with no Kirk, Spock, or other characters from the original series. This is about the Borg, which the Federation didn’t encounter until Star Trek: The Next Generation. But they keep coming back to all the subsequent series. The Borg keep trying to tell us that we will be assimilated and resistance is futile, but we all know better. We can resist all we want, or we can be assimilated and then come back to our normal selves; it’s been done a lot. Hearing it repeated so many times makes the word “futile” seem altogether odd. And then we see that Seven of Nine (and a couple of other characters) pronounce it like an American in Star Trek: Voyager. That’s kind of jarring after we’ve heard the Borg pronounce the word in British English for so many years. -via Laughing Squid