Since the Ukraine-Russia war started on February 24, 2022, according to UNHCR, more than 3 million people have fled their home country to find refuge in neighboring countries. Uprooting their lives and destroying countless others, the war has brought on terror, uncertainty, and confusion to a large part of the world. However, there are a few heartwarming stories that make us believe in the existence of the silver lining.

Bored Panda previously covered the story of Hassan, an 11-year-old Ukrainian boy, who made headlines with his journey of 600 miles from Ukraine to Slovakia, taking it like a real hero and getting through one of the most challenging experiences of his life with a smile. It was unclear what was to happen to his family who’d stayed behind but now we have an update—the family is reunited! Let’s get into the story. 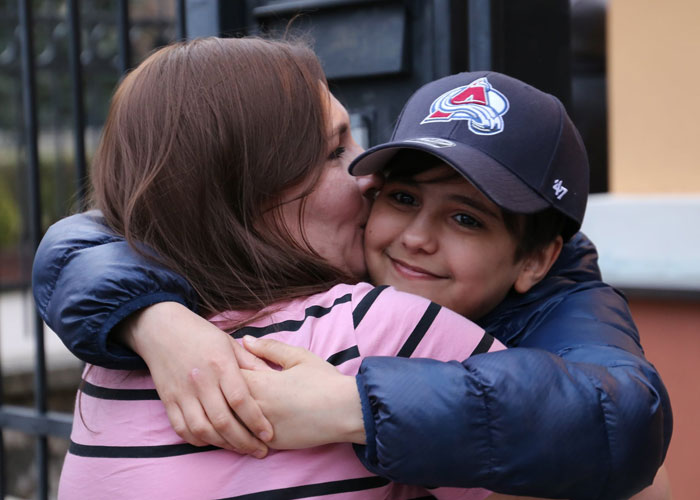 The 11-year-old boy, named Hassan, who fled Ukraine with just a passport and a phone number written on his hand, has been reunited with his mum and siblings.

The family, then living in Zaporizhzhia, had been close to the nuclear plant that recently came under attack from Russian forces. Yulia Pisetskaya, the boy’s mother, had no other choice but to put her son on a train to Slovakia in the hopes of getting him to safety. She herself had stayed behind to look after her ailing mother. Now, both of them and their family dog have escaped the dangers of war and returned to their family.

The whole family is now safely residing in Slovakia, including their family dog 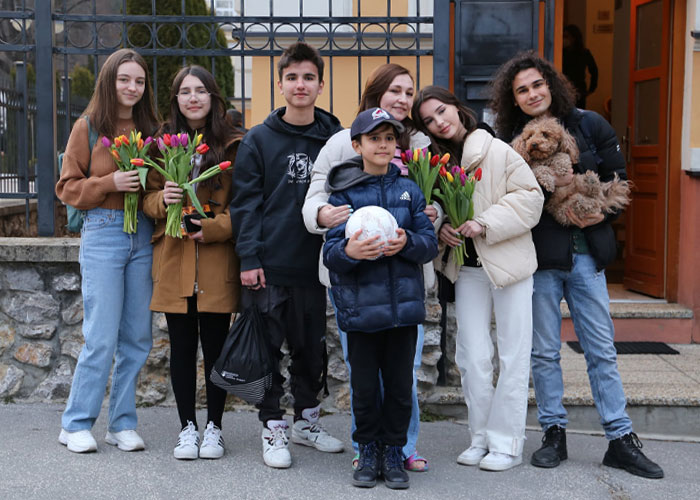 Remembering the journey the boy undertook and the bravery he exuded 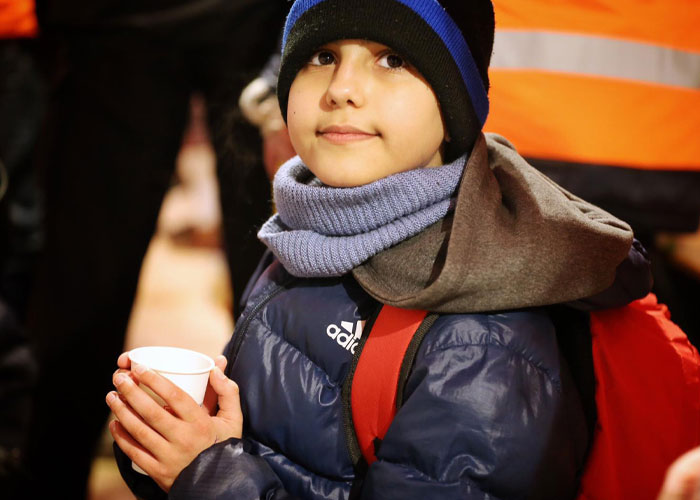 The Slovakian Interior Minister Roman Mikulec praised the boy for his courage, stating that he showed “great determination, courage and fearlessness, which sometimes even adults do not have.” But the boy did go through some hardships along the way.

Discussing the scariest part of the journey, his sister translated for Good Morning Britain that Hassan found the train journey to be frightening as the train was very full with around 300 people in one carriage: “The kids and the people were sitting in the hall and everyone was talking in foreign languages and he wasn’t understanding so that was the scariest bit for him.” Yet, he let little of the fear show, rather focusing on the goal at hand. 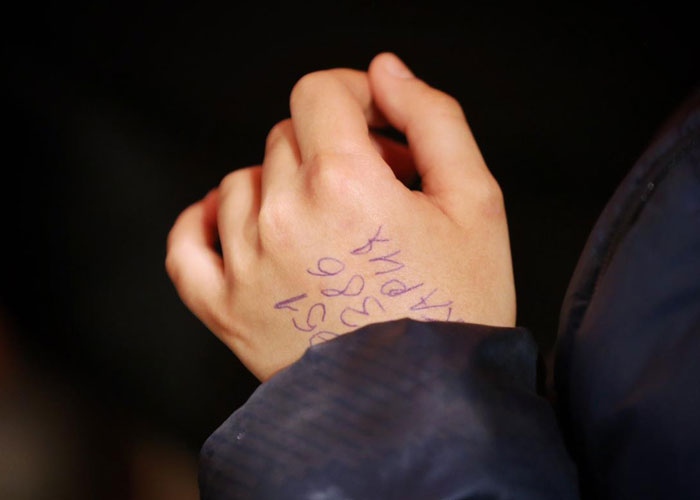 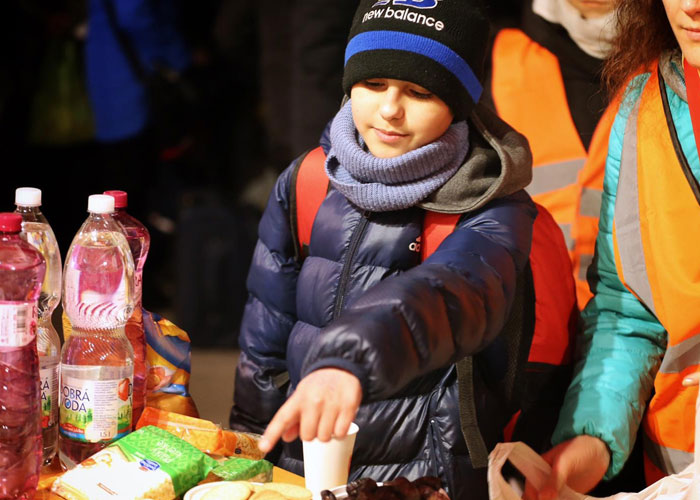 Volunteers at the Slovakian border met the boy, provided him with food, warmth and were able to contact his brother in Slovakia, thanks to the scribbled phone number on his small hand.

The Slovakian Interior Ministry said on Facebook that the boy “won everybody’s hearts with his smile, fearlessness and determination, worthy of a real hero.” The boy soon reunited with his siblings in Slovakia and although they were relieved to have their little brother with them, they were still very concerned about their mom.

They recalled thinking that everyone who was close to their mother left her all at once, continuing to say that “for her it was more difficult than for us. We think about our mother and we miss our mother.” 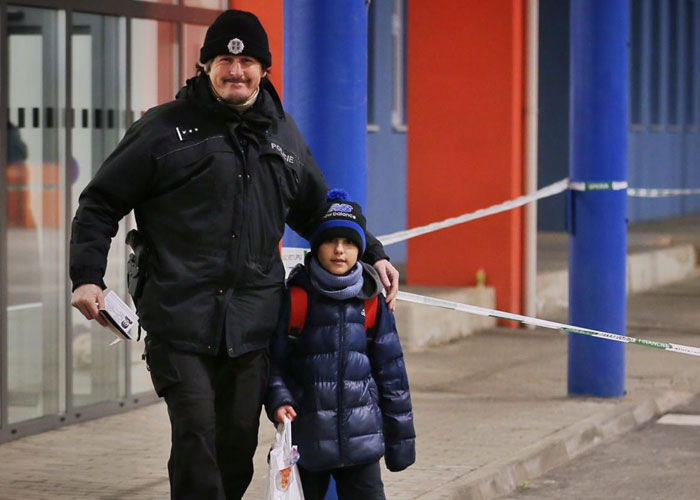 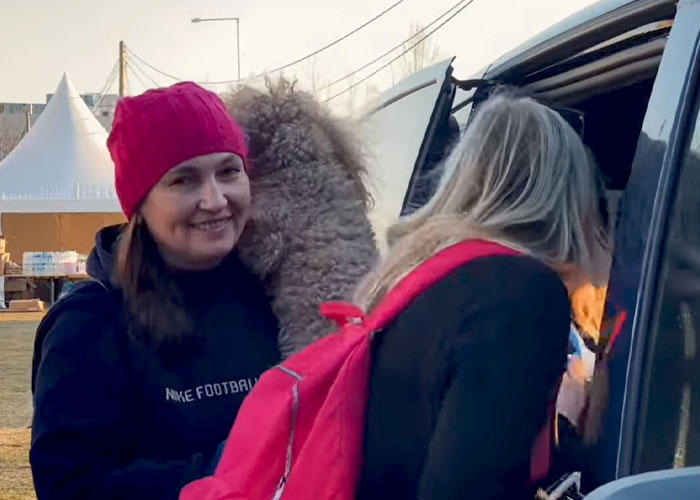 Previously the boy’s mother expressed her gratitude for the Slovak customs and volunteers who took care of her son and helped him cross the border, saying “I am grateful you have saved my child’s life.” At the time, they couldn’t leave, despite the approaching danger.

Polícia Slovenskej Republiky posted an update on the story, stating that the threat of Russian bombing convinced the mother to at least try to escape with the grandmother. They also took their little dog and after a very difficult journey on the evacuation train, they managed to arrive in Slovakia safely. 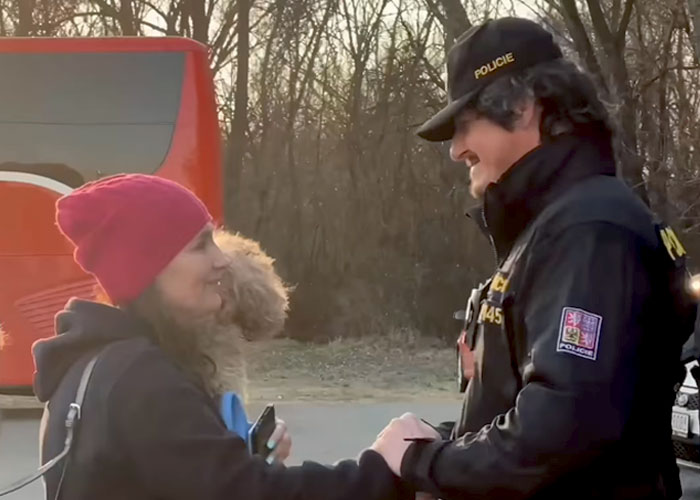 After a grueling journey in a train full of other refugees, they finally made it to Slovakia, where they received a warm welcome 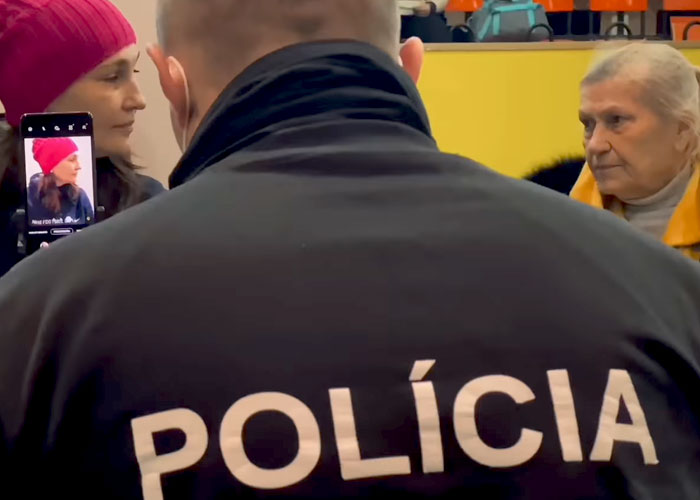 She told The Sun: “The train ride was very difficult. Hundreds were crammed in a single car. But we had to escape so our family could be back together.” She continued to thank everyone from her heart and, even though they have to start from scratch having lost everything, she looks on the bright side, enjoying having her family back together.

The police look to have taken good care of them both, registering them at the Slovakian border and providing transportation. 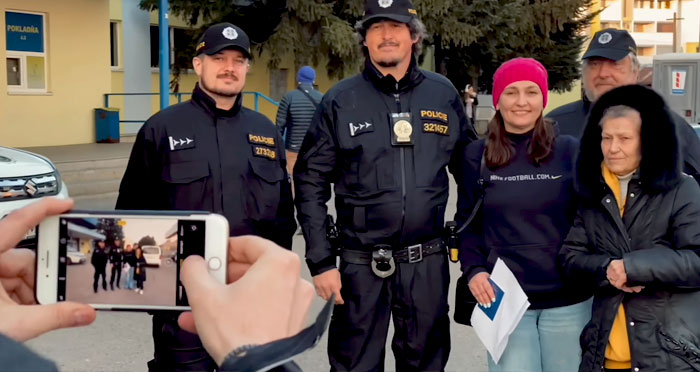 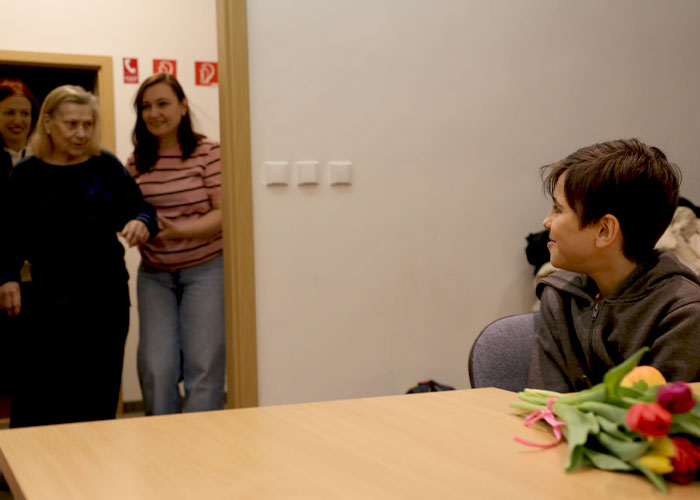 Police of the Slovak Republic’s official Facebook page shared the reunion of the mother and her children.

Their journey has not been an easy one, the caption of the video stating that it is not the first time they’ve had to flee a war: “Years ago they had to unexpectedly leave Syria. Sadly, the father didn’t make it. They settled with their mother in her homeland in Ukraine. A few years have passed and they had to run again.”

Thankfully, this time, the war didn’t take anyone away from them. They are together and that’s all that matters. 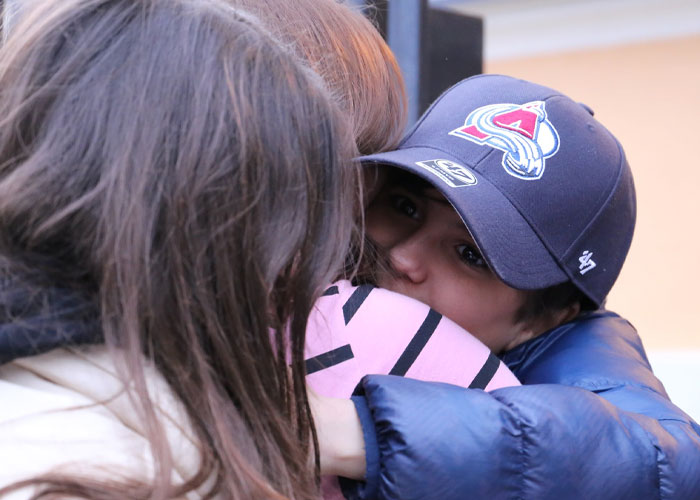 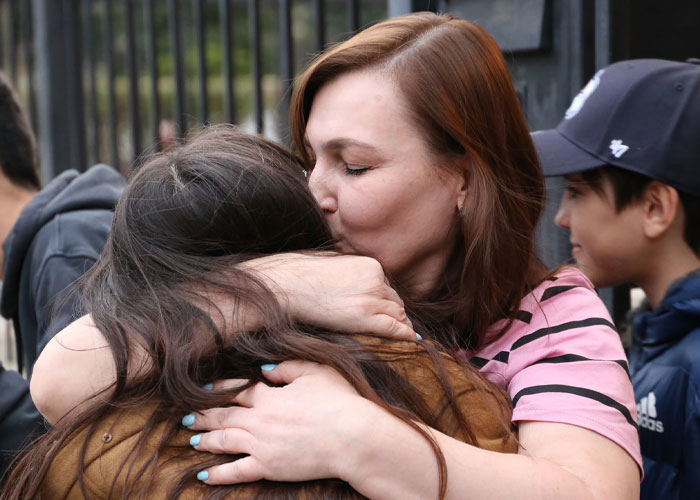 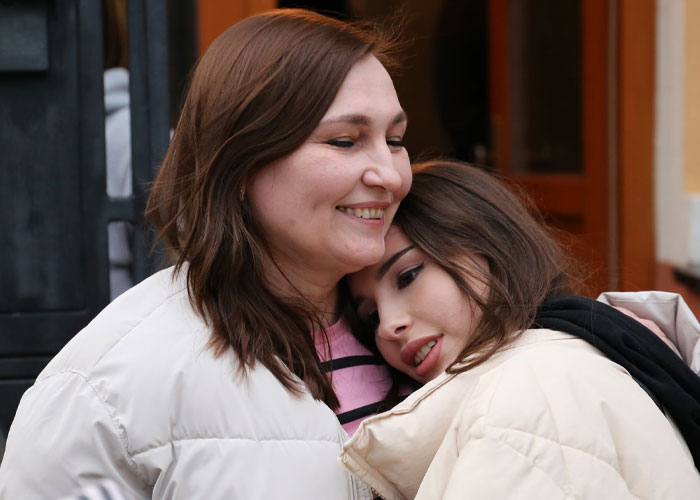 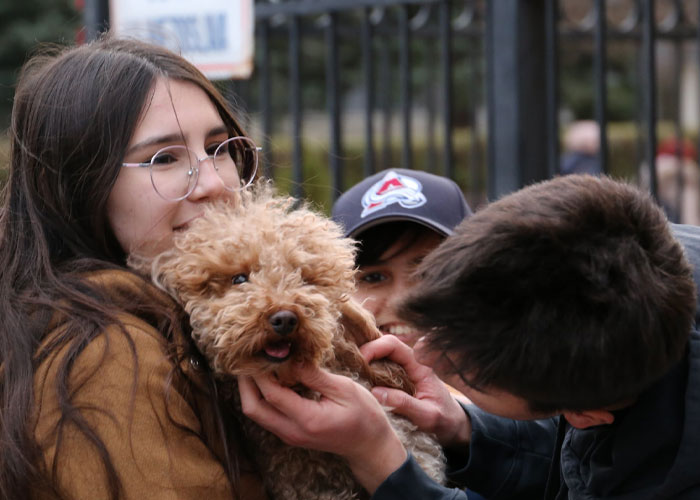 The pup looks to be having the time of his life being reunited with his young friends. Travel with pets has been a concern for many, some staying behind in order to take care of their furry companions.

However, The European Commission has strongly advised member states to allow Ukrainian citizens fleeing from the war with their pets to authorize their entry without a prior individual application for a permit.

“People should not have to jeopardize their own safety in efforts to prevent their animals from being left behind to fend for themselves,” said Ruud Tombrock, executive director for Europe’s office of Humane Society International (HSI). 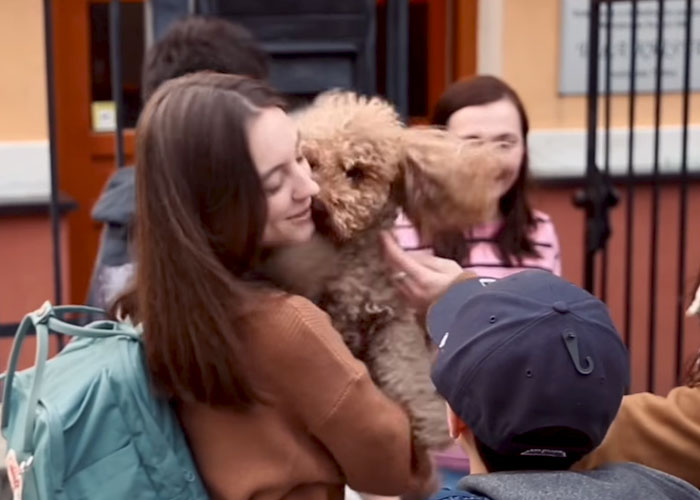 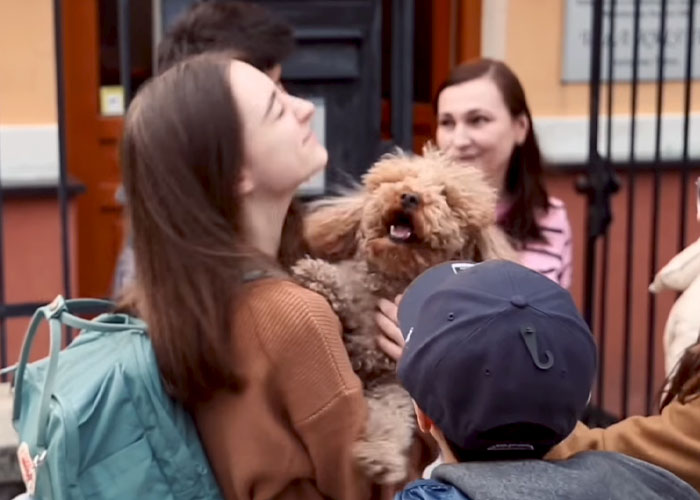 So what will the future hold? It is hard to say at the moment, but one thing is certain—this family will stay together 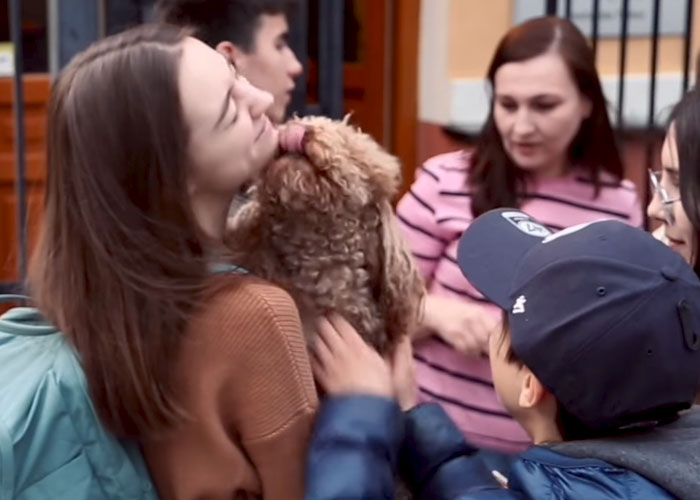 So what’s to come for this family? According to the Slovakian Police, the eldest brother, who is just 20, is in the process of sorting out all of the family’s documents, finding schools and accommodation. 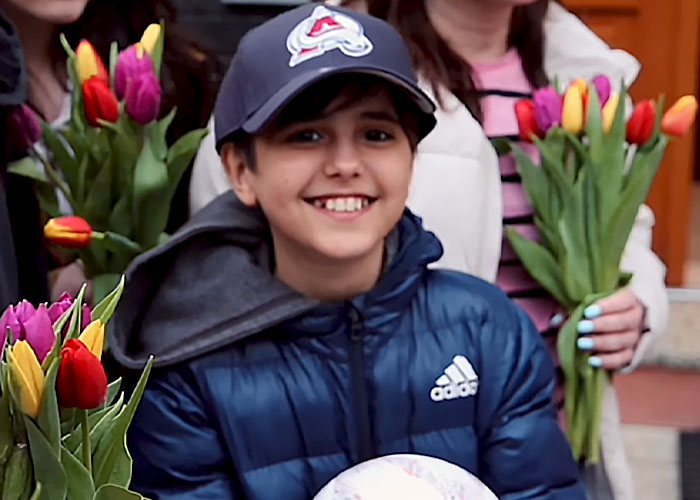 As the war continues to escalate, the Slovakian Interior Ministry has assured all those who are fleeing Ukraine that “they are ready to help here in Slovakia”. People are promised safety, and, if applying for temporary protection, they will be provided with health care, social security, food, accommodation, education and job opportunities.

Other countries have been nothing short of welcoming and helpful as well. A Bored Panda article looked at the Polish people leaving baby strollers for arriving Ukrainian mothers in train stations and a surprise birthday party being thrown for a 7-year-old Ukrainian refugee. What seems like a simple act can help those that need it the most. 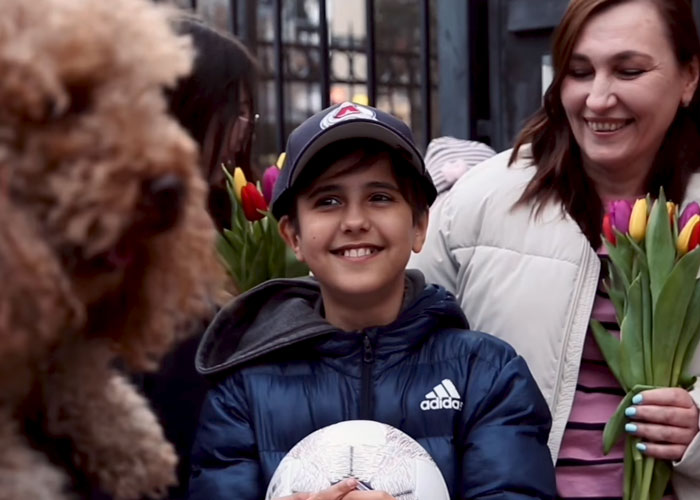 It is truly touching to watch at least one family getting a happy ending, when so many are left questioning whether they’ll see each other again. Hundreds dead, millions seeking refuge and safety, and an uncertain amount of days left of this war. We must continue to stay strong for ourselves and for our neighbors, offering help where possible. Here are some resources and links to aid Ukraine.

Enjoy the full video of the family’s reunion

﻿
Let us know what you thought of this story in the comments below and I wish you all a safe and happy day!

The post 11-Year-Old Boy Who Traveled 600 Miles From Ukraine To Slovakia With Only A Phone Number On His Hand Reunites With His Mother first appeared on Bored Panda.