Just when we thought we’d heard enough about new biennials, we caught wind of Amsterdam’s recent Bicycle Architecture Biennale and we have to admit, it sounds more necessary than most. Comprised of curated projects and selections from a global open call, the show brought together 15 projects from nine countries to question how cities can become more bike-friendly, and what they might gain in the process. The selected projects explore “how design solutions can go beyond the functional, and also lead to healthier lifestyles, more inclusive communities, a cleaner environment, and a more sustainable economy.”

It’s not surprising that four of the projects are from the Netherlands, a country that still leads the charge with roughly 43% of its residents cycling every day. Others come from cities with less robust cycling infrastructures, which are just starting to embrace bikes as a key transportation strategy.

“Cycling is much more than a transportation solution for cities, it is also a powerful force for transformation,” said event co-founder Maud de Vries. “Every city or neighborhood has the potential to become a success story through cycling and with this biennale, we want to offer the inspiration to make that happen.”

The exhibition was on view in Amsterdam this past weekend but has announced plans to go on a global tour later this year. Cities like Oslo, Rome, and Ghent have been confirmed with others still in the planning stages. Stay tuned for more updates and in the meantime, check out some of the highlights from the show below. 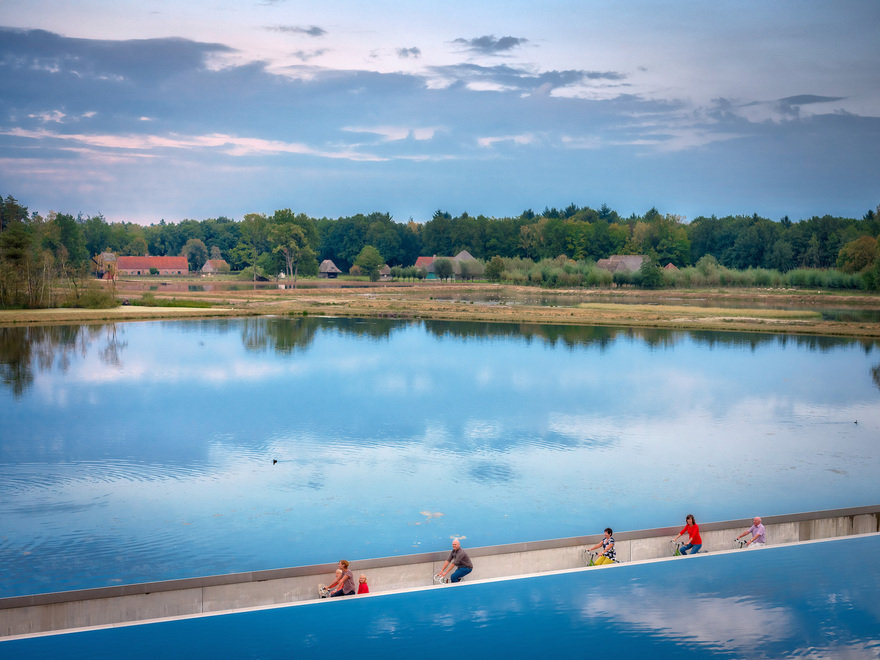 Belgian firm Lens°Ass Architecten created this unique path in Limburg which gives riders the sensation that they are “cycling through water.” The picturesque and surprising route draws 700 riders a day and was named one of TIME’s 100 Greatest Places in 2018. 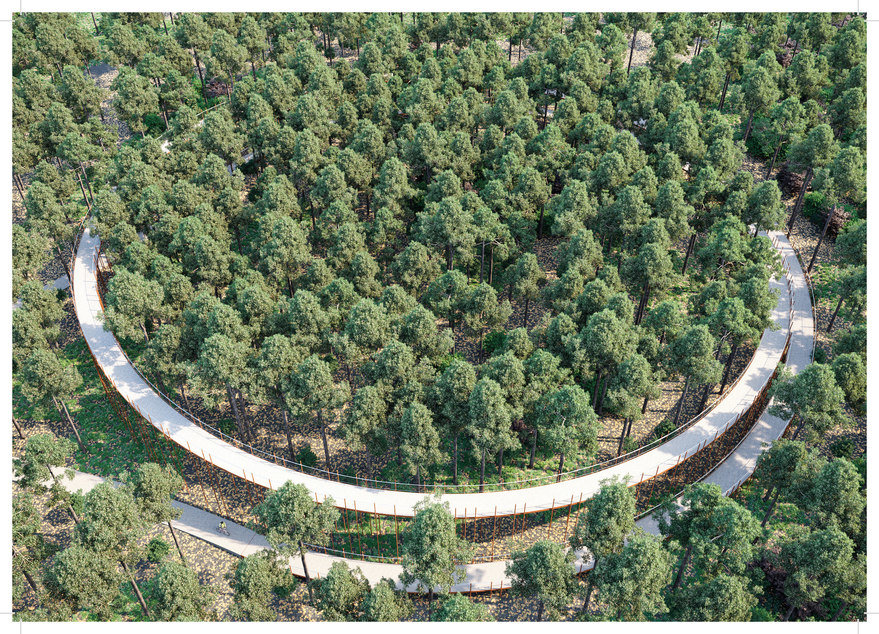 Another Belgian design via BuroLandschap, this double circle path stretches over 2300 feet and gives riders the sensation of riding ever closer to the treetops. 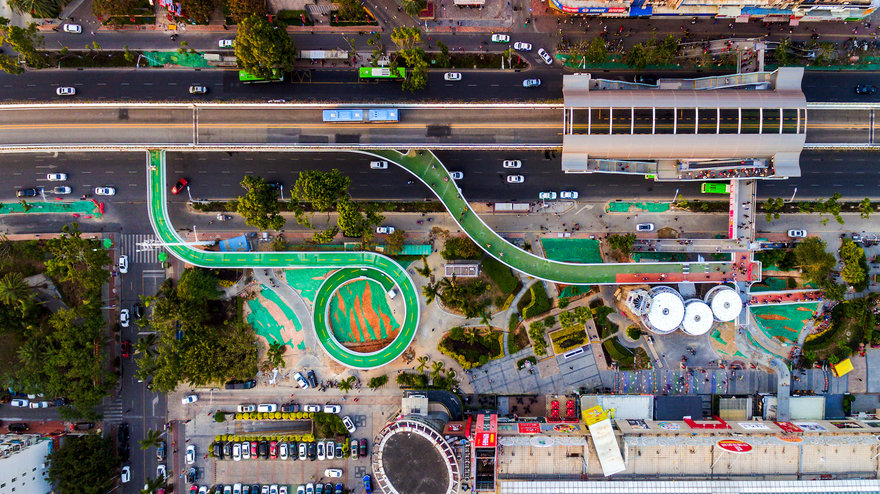 Working with the city of Xiamen, Dissing+Weitling developed this 5-mile long bicycle “skyway” underneath the city’s existing Bus Rapid Transit (BRT) lane. The intention of the design is to inspire people to prioritize the green alternative—the bicycle—instead of the car and the result is China’s first suspended bicycle path and the world’s longest aerial bicycle lane. 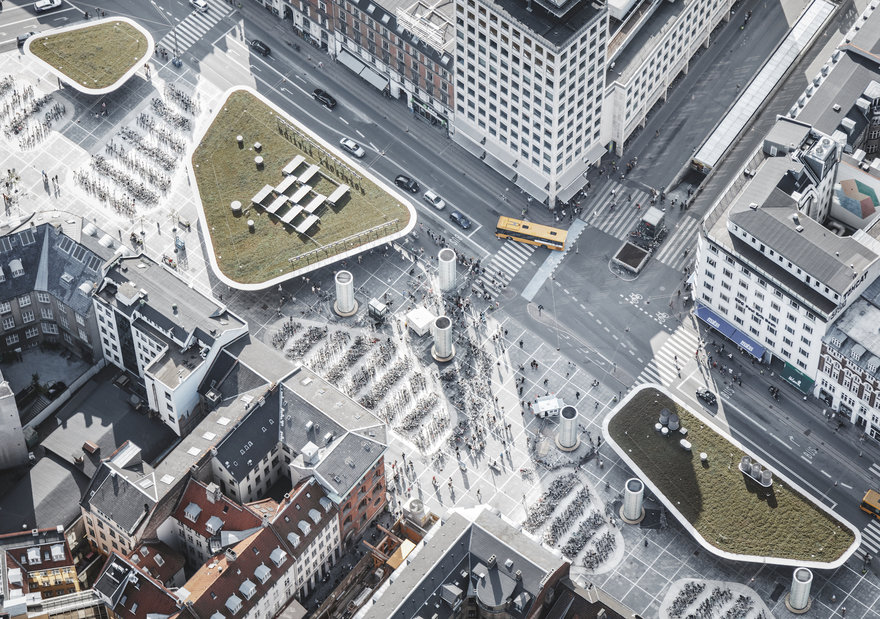 COBE and Gottlieb Paludan Architects designed Nørreport Station in Copenhagen, the busiest station in Denmark. Composed of a series of rounded roofs mounted on glass pavilions, the central public space was designed to accommodate cyclists and includes parking spaces for 2,500 bikes. 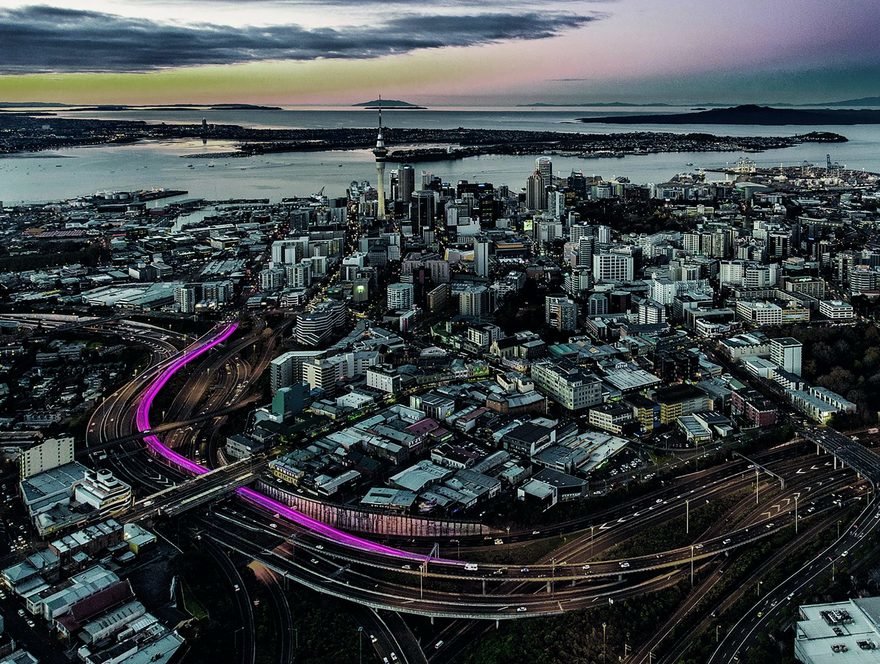 The nearly 2000-foot long Nelson Street Cycleway is part of Auckland’s inner city cycle loop and immediately stands out due to its bright pink hue. Along one side of the route, 300 individual LED light poles are arranged as an interactive light sculpture that transforms the new urban space. 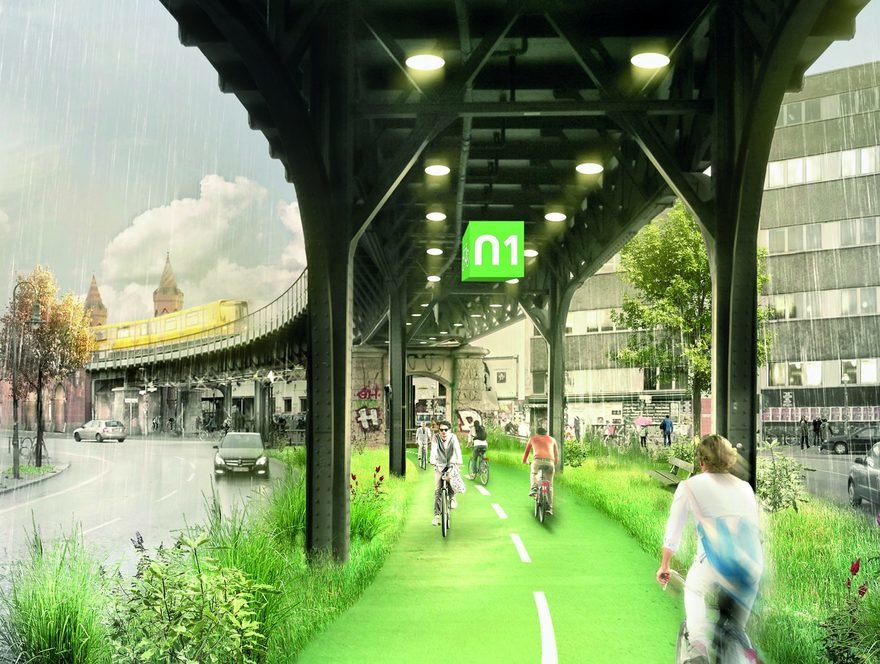 This project by Paper Planes E.V. converts the neglected space under Berlin’s elevated metro line U1 into a 6-mile covered, bike path. The path’s surface is made of recycled plastic and the project includes a signaling system for cyclists, and landscaping along the sides to shield cyclists from traffic. The project also includes plans for beer gardens and charging stations for electric bikes along the way. 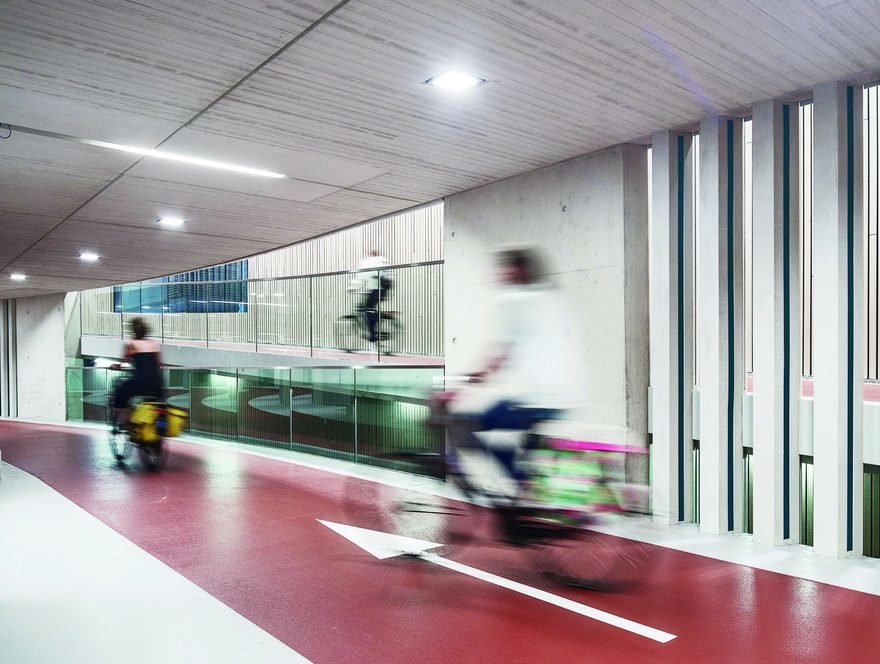 The groundbreaking bike parking at Utrecht Central Station is the largest in the world, with space for 13,500 bikes. Users can cycle all the way through the three-level garage, while electronic indicators lead them to available slots. The facility also includes a repair shop and rental service. 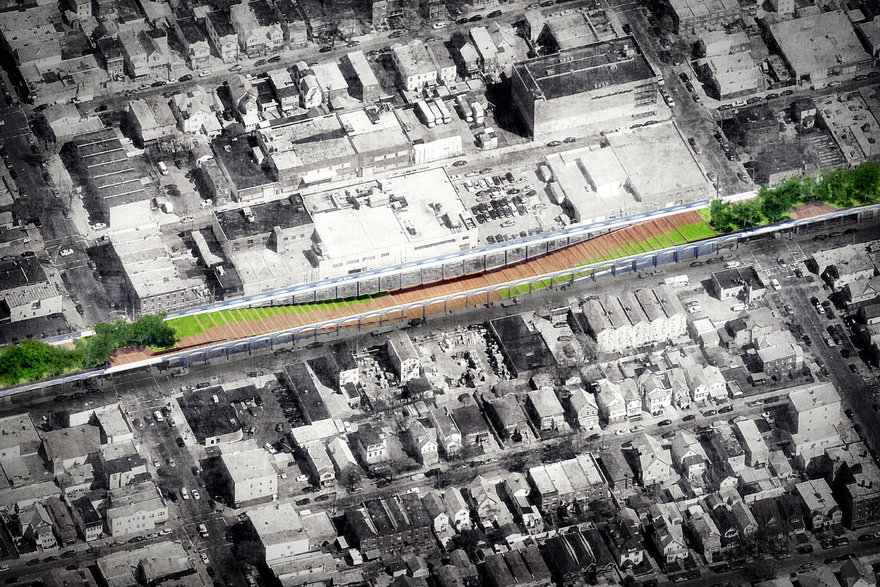 This proposal by Nooyoon for an abandoned rail line in Queens, New York is for an “upside down bridge” with a community center at the base, a “floating forest” at each end, spaces for urban farming, and bike paths along the side.