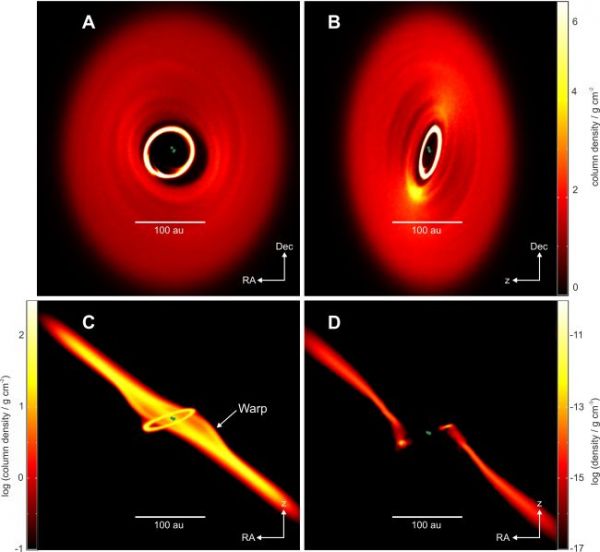 When we first saw the binary stars of Tatooine, it was hard to wrap our heads around how that worked. Since then, astronomers have found plenty of binary star systems, in which two stars revolve around a common center of gravity. The system called GW Orionis (in the Orion constellation) is a young system with three stars, two that form the normal binary and another revolving around the two a few hundred million miles away. There are three rings of dust surrounding GW Orionis, one with an unusual tilt.

Now, a closer analysis reveals that the rings may hold more than just dust; according to two recent studies, published today (Sept. 3) in the journal Science and May 21 in The Astrophysical Journal Letters, there could be a young planet, or the makings of one, bulging up inside the rings and throwing off the whole system’s gravitational balance. The presence of such a planet would not only help explain why the system’s inner ring appears to be wobbling around wildly like a broken gyroscope — but, if confirmed, the distant world would also become the first known example of a single planet orbiting three suns at once, the researchers said.

“Our simulations show that the gravitational pull from the triple stars alone cannot explain the observed large misalignment [in the rings],” Nienke van der Marel, an astrophysicist at the University of Victoria in Canada and co-author of the May 21 study, said in a statement. “We think that the presence of a planet … has likely carved a dust gap and broken the disk [where the inner and outer rings meet].”

Read about the rare planet and how it was discovered at LiveScience. -via RealClear Science