Living with a food allergy can be incredibly difficult. You always have to be on the lookout for potential danger and weigh the odds of cross-contamination. And it becomes hard to relax if you get the munchies at a public event or a fun celebration like a wedding. After all, even if a chef caters to you specifically, you can never be 100% sure that there haven’t been nuts or what you’re allergic to in the vicinity of the kitchen. And a guest eating a piece of candy and accidentally touching your glass or plate might even make you go into anaphylactic shock.

So when it comes to catering to others, you’d expect that vegans—of all people—would have a bit more sympathy for people who are extremely picky about what they eat due to health reasons. You also probably wouldn’t think that someone would bring some eggs to a vegan wedding (or that they’d cause massive drama at a celebration of love). And yet, here we are: a redditor, who has major food allergies, turned to the AITA community to share what happened when she brought egg salad to her brother’s vegan wedding.

Scroll down to read about the vegan wedding egg drama in the redditor’s own words. The story isn’t as clear-cut as you’d think, and the AITA community had a whole bunch of different reactions to it. When you’ve read the OP’s post in full, let us know what you think in the comments, dear Pandas.

A couple of eggs recently ended up creating some major drama 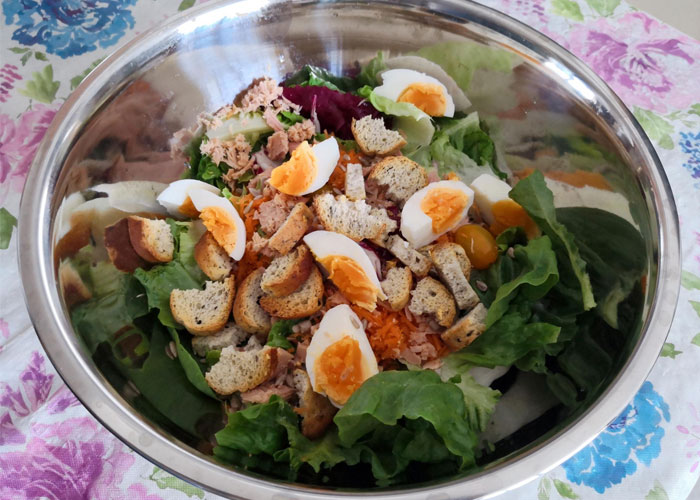 The guest, who has some severe food allergies, explained what happened at her brother’s vegan wedding when she packed a homemade meal 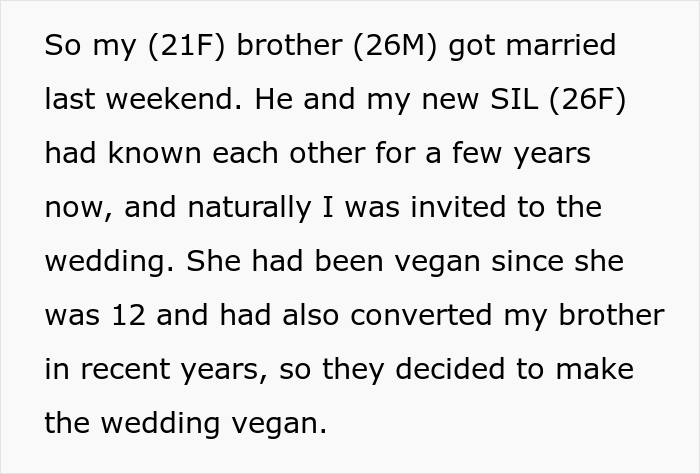 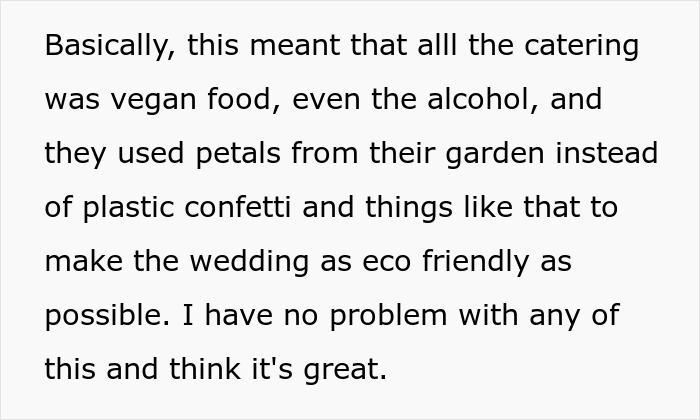 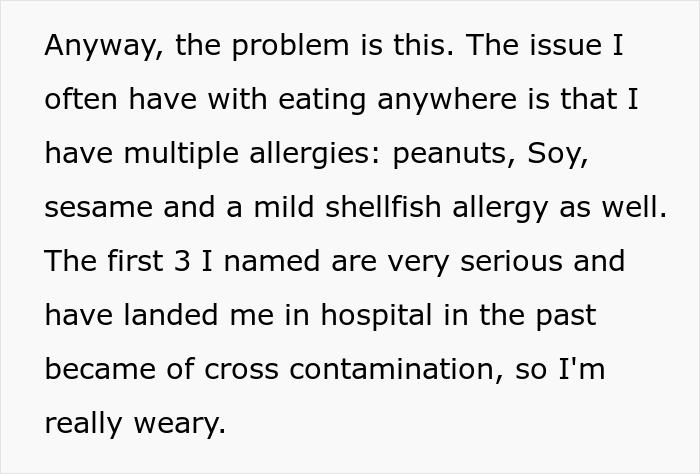 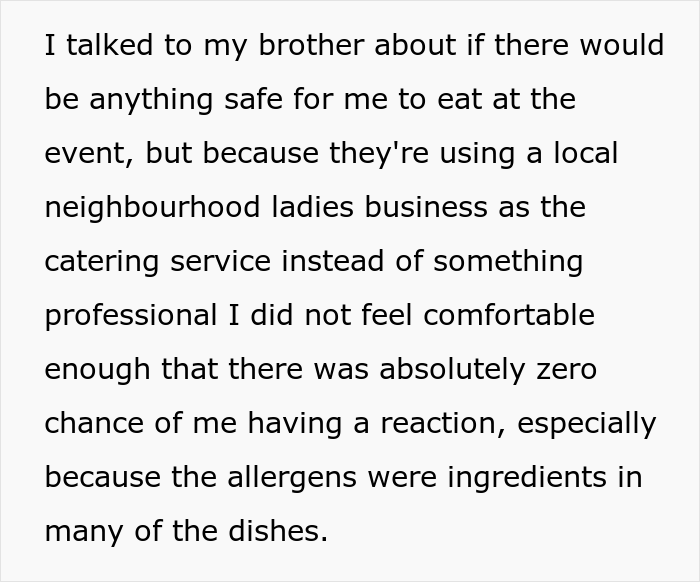 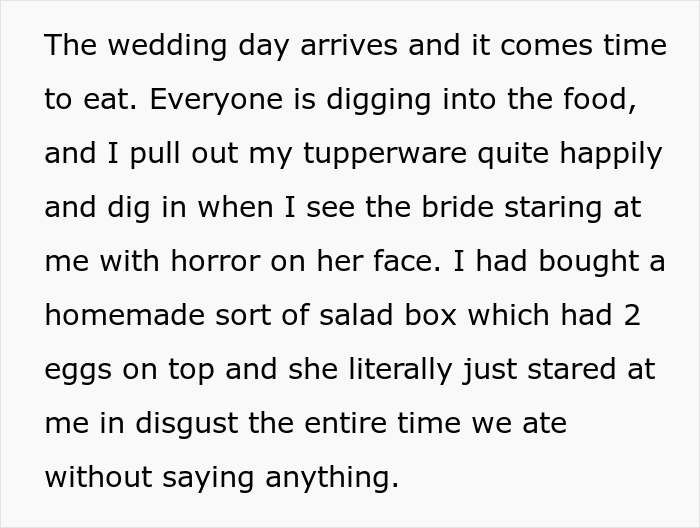 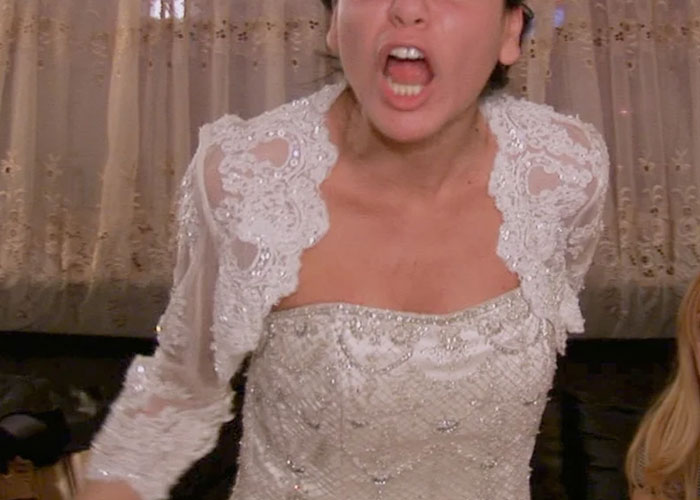 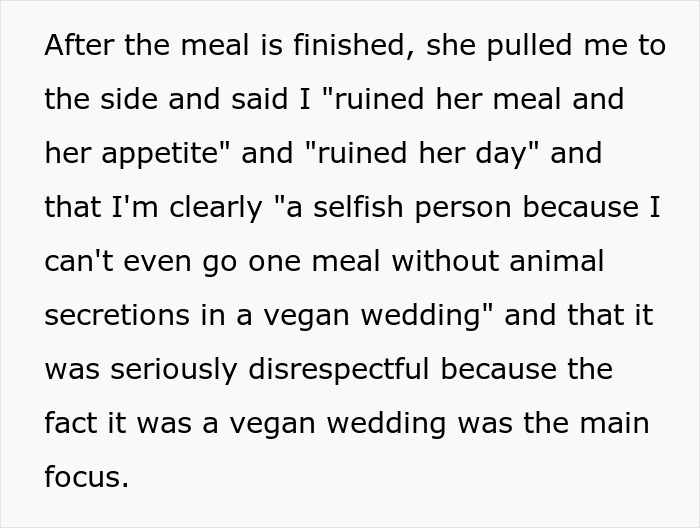 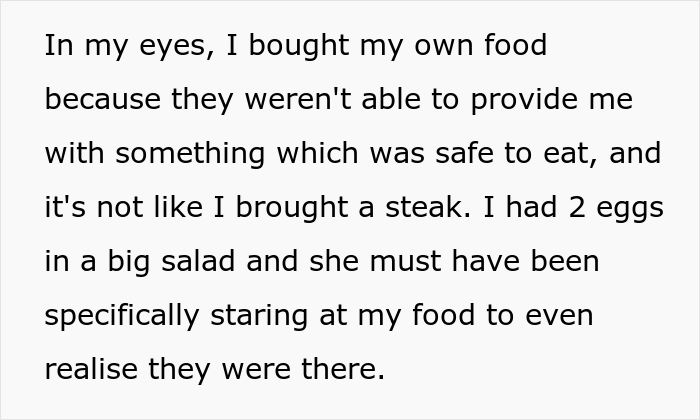 The OP was very clear from the get-go that she’s aware of how nuanced the situation is, and she wanted the internet to hear their side of the story. As it turns out, two eggs are the line between an amazing wedding and a celebration that ends up being ruined, for some vegan brides.

Respect for one’s food preferences is a two-way street. The bride felt like she and her values were being disrespected by her sister-in-law. Meanwhile, the SIL who wrote the Reddit post, felt like she didn’t really have a choice but to bring her own food to the wedding, seeing as the people behind the food catering weren’t ‘professionals’ and there was no way to guarantee that there wouldn’t be any allergens in the dishes.

At the core of everything lies the question about if the OP should have just brought a simple vegan salad from her home, instead of one with eggs. She feels like she cleared the issue with her brother, the groom, beforehand. Meanwhile, on the day of the actual wedding, both the bride and groom were disappointed in the guest’s behavior. The bride even went as far as to call her SIL ‘selfish’ and accused her of ‘ruining’ the entire day.

A while back, Bored Panda spoke about food allergies and what to do when dining out, with pie artist and food expert Jessica Leigh Clark-Bojin. She made it very clear that if you have life-threatening food allergies, there’s never a 0% risk when you’re dining out. The burden of responsibility, in the expert’s opinion, can’t fall just on the restaurant’s shoulders, even if there’s crystal-clear communication between them and the allergic customer. Cross-contamination is a very real possibility even if everyone involved is a seasoned chef.

“Most restaurants will do their best to accommodate guests with specific dietary requests, but for certain life-threatening allergies, it’s not always possible due to the possibility of cross-contamination,” the pie artist told Bored Panda during an earlier interview. She stressed that there are differences between food allergies that make one uncomfortable and ones that pose an actual threat to one’s life.

“The kitchen can’t guarantee that trace amounts of the allergen will not make its way to your plate, and they (understandably) don’t want to be responsible for your anaphylaxis!” Jessica told us.

“If your allergies are so severe that they will cause you to have a spectacularly bad time should you come in contact with your triggers, it’s best if you stick to restaurants that have kitchens and menus which already exclude those items,” she said. People with allergies have to take the time to do their research about the restaurants they plan on visiting. They should also consider calling the restaurant or even going there in person to have a chat with the staff if they’re very worried about their food allergies. 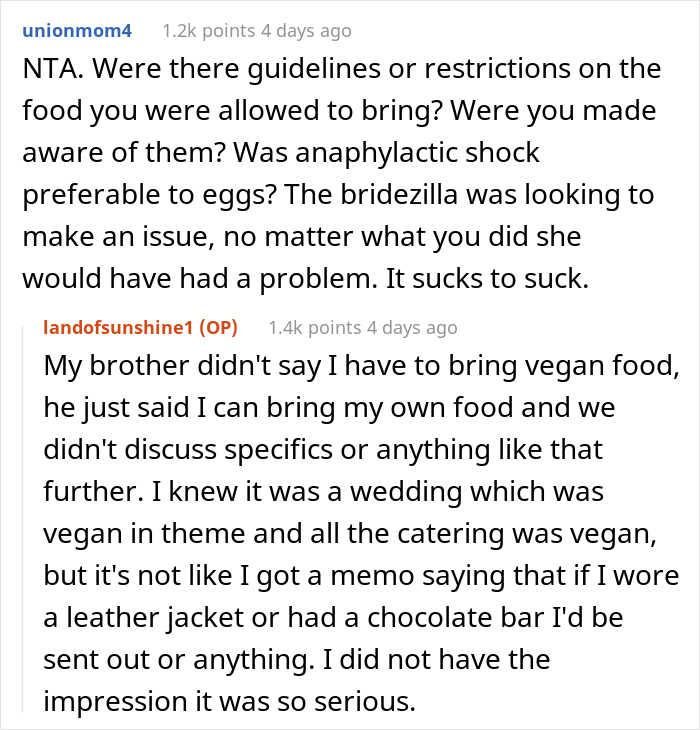 Some people thought that the woman did absolutely nothing wrong 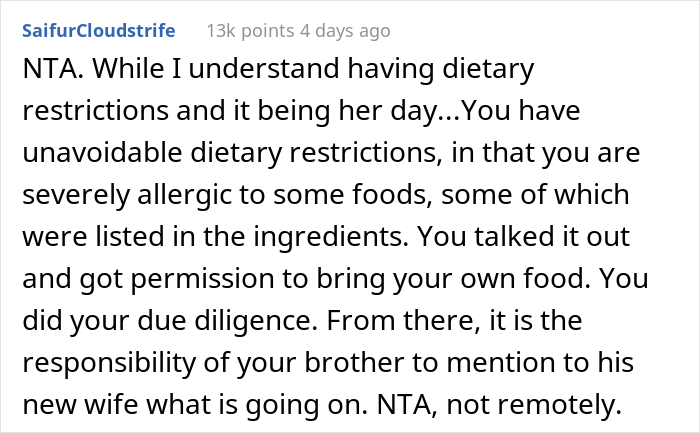 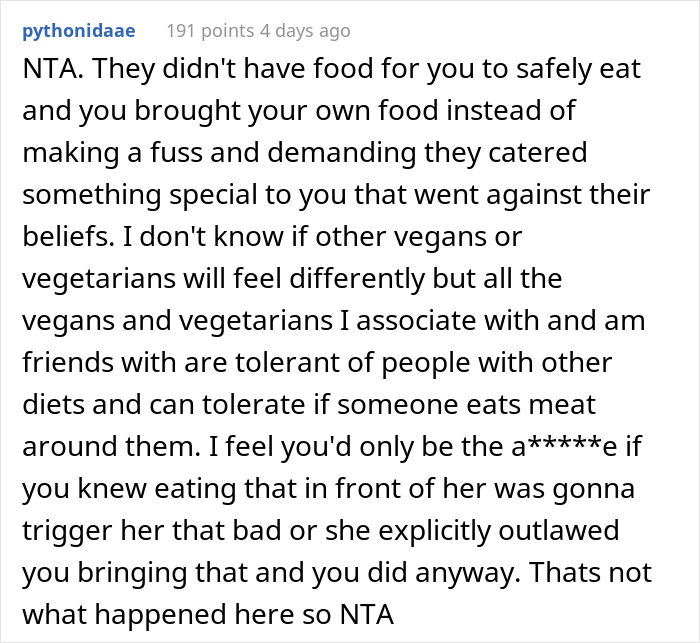 However, others believe she should have packed something vegan to go match the happy couple’s food 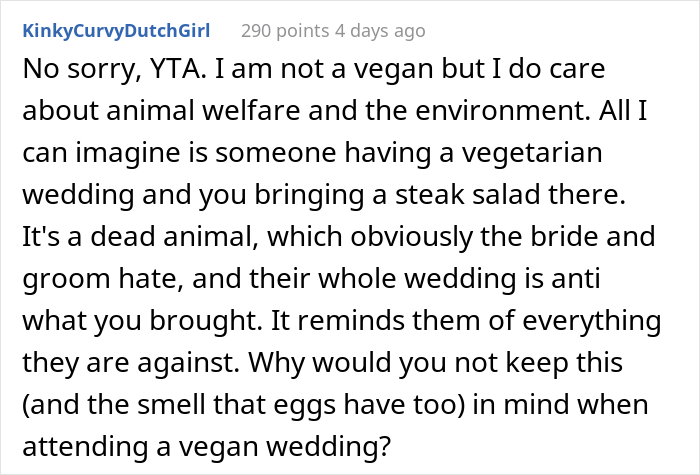 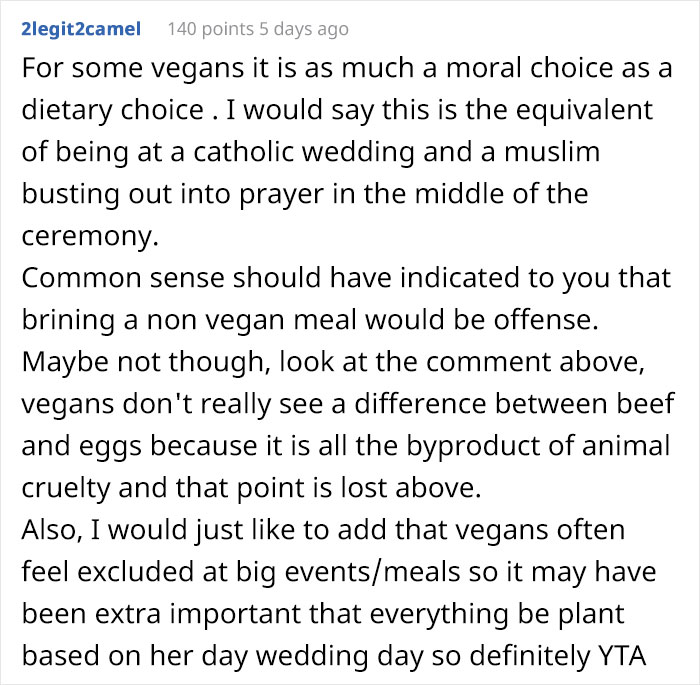 And then there were those who thought that nobody was blameless. Here’s what they had to say 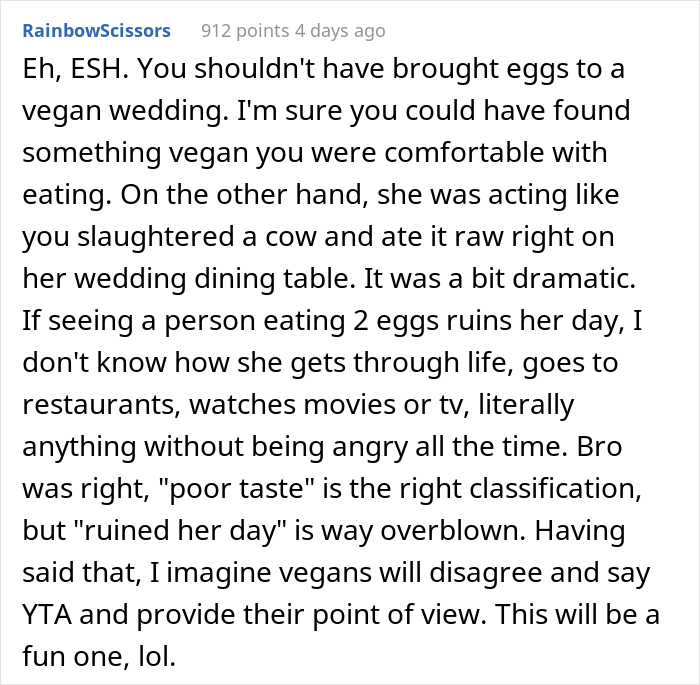 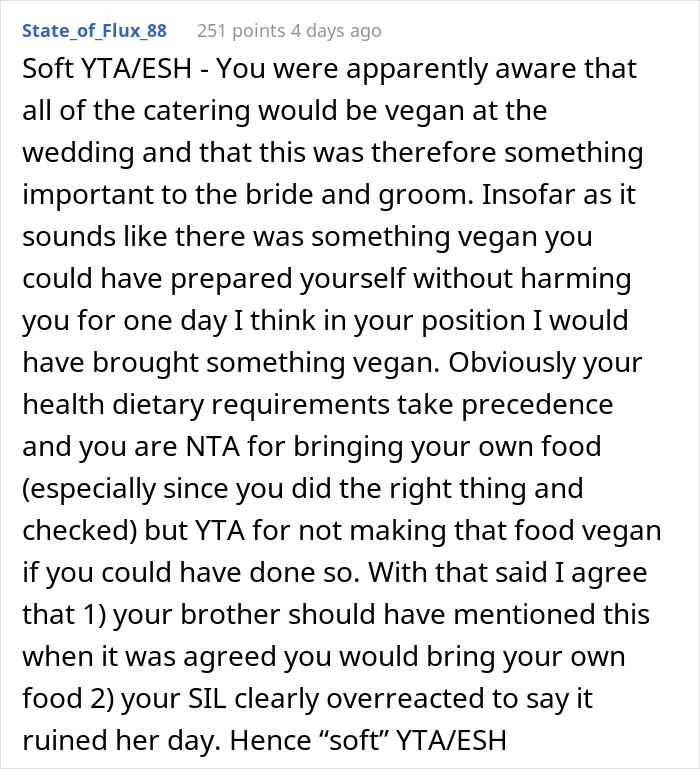 The post “Am I The Jerk For Bringing Eggs To A Vegan Wedding?” first appeared on Bored Panda.