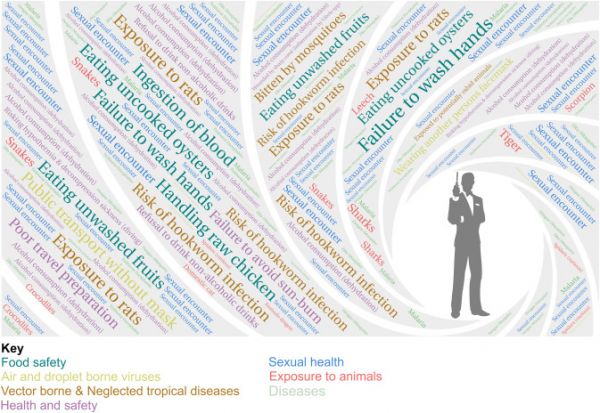 Consider where James Bond, agent 007, has been. His occupation as a secret agent for MI6 takes him to exotic locations all over the world, often at the drop of a hat. We plebeians know that international travel takes extensive planning, often including health checks and vaccines to obtain visas and tips for avoiding illness. Bond doesn’t have time for any of that.

A scientific paper in the journal Travel Medicine and Infectious Disease takes an in-depth look at the dangers Bond confronts as he travels the world, kills people, and beds numerous women. The evidence is gleaned from 25 Eon-produced films from 1962 to 2021, in which Bond goes to 47 identifiable countries on 86 trips. They consider food safety, sexual health, airborne diseases, arthropod-borne diseases, and tropical diseases. From the introduction:

We uncovered above-average sexual activity, often without sufficient time for an exchange of sexual history, with a remarkably high mortality among Bond’s sexual partners (27.1; 95% confidence interval 16.4–40.3). Given how inopportune a bout of diarrhea would be in the midst of world-saving action, it is striking that Bond is seen washing his hands on only two occasions, despite numerous exposures to foodborne pathogens. We hypothesize that his foolhardy courage, sometimes purposefully eliciting life-threatening situations, might even be a consequence of Toxoplasmosis. Bond’s approach to vector-borne diseases and neglected tropical diseases is erratic, sometimes following travel advice to the letter, but more often dwelling on the side of complete ignorance. Given the limited time Bond receives to prepare for missions, we urgently ask his employer MI6 to take its responsibility seriously. We only live once.

The three authors of the paper “wasted their evening hours examining the films” which totaled 3113 minutes per author. You can read the entire paper at ScienceDirect. -via Metafilter