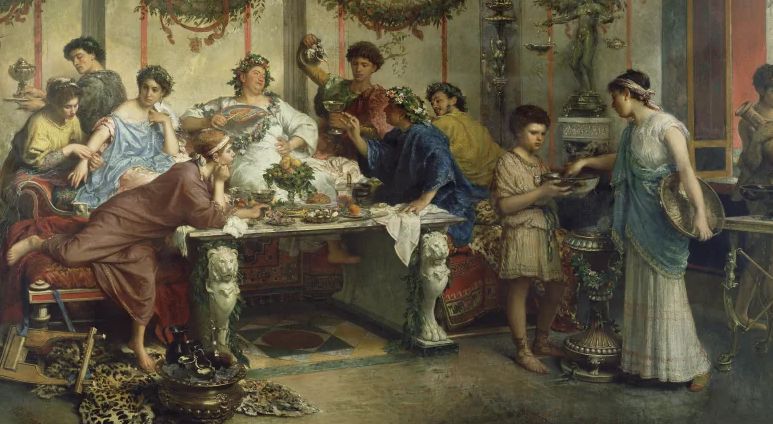 Have you ever wondered how people in the past threw parties? A good example to look at would be ancient Romans. Well, while their partying methods are completely different, they were known for their excessive feasts and parties. The Roman elite preferred to hold private dinner parties in their homes rather than big, open, public parties. A type of Roman dinner party called convivium was usually held in residences with a small group of friends, family, and business associates. Don’t underestimate the small number of guests, though, because conviviums were designed to be extravagant and expensive:

[…]The most common reception room for such parties was the dining area, which in Roman homes were known as the triclinium, or “three-couch room,” because dining was typically done while reclining on couches, which were arranged in a U-shape with a table in the middle in order to facilitate sharing and conversation. As these entertaining spaces were meant to be a delight to the senses, an upper-class triclinium would often have many decorative elements such as floor mosaics, sculptures or other pieces of art, and fancy furniture.

While the Greeks were known to enjoy drinking parties known as symposia (the one at which Socrates and friends discussed the true nature of love being the most famous one), Roman dinner parties were different in a number of ways. The chief difference is that women were allowed to attend Roman parties, providing that they were of the appropriate class. At Greek symposia, the only women allowed were entertainers, musicians, or sex workers known as hetairai. If you were Roman, at least your wife could be there.