At first glance, this urban trash can looks like little more than a metal cylinder. Swiss designer and engineer Daniel Hunziker, however, reveals the attention to design detail that went into it. 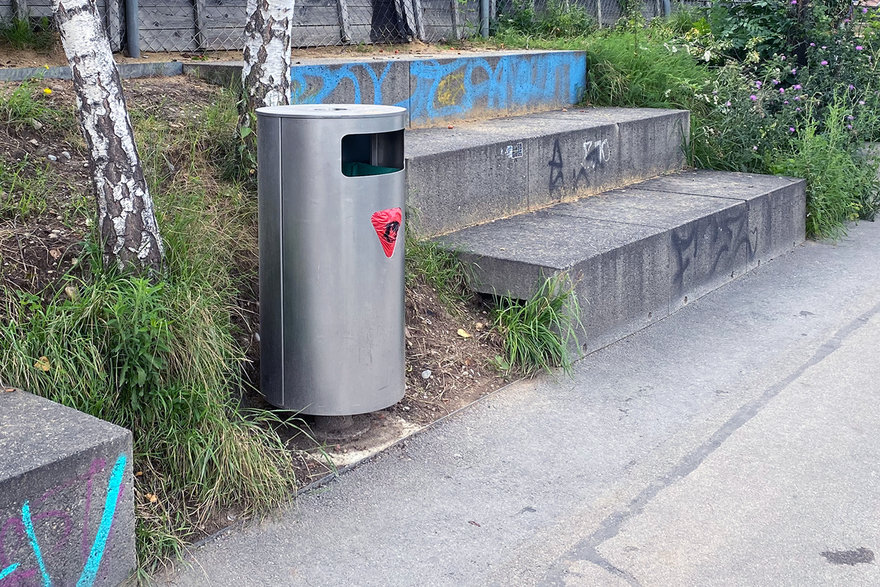 “The requirements for the new waste bin for the city of Zurich were diverse and complex. It should meet the requirements of various associations, be robust, sustainable and functional, enhance public space with its well-formed appearance and strengthen the identity of the city of Zurich. The design process to the production of the first prototype took around 100 working hours. (And of course, the new Züri Kübel (‘bucket’) which has been gradually installed since January 2021, also meets all the requirements for people with disabilities.)” 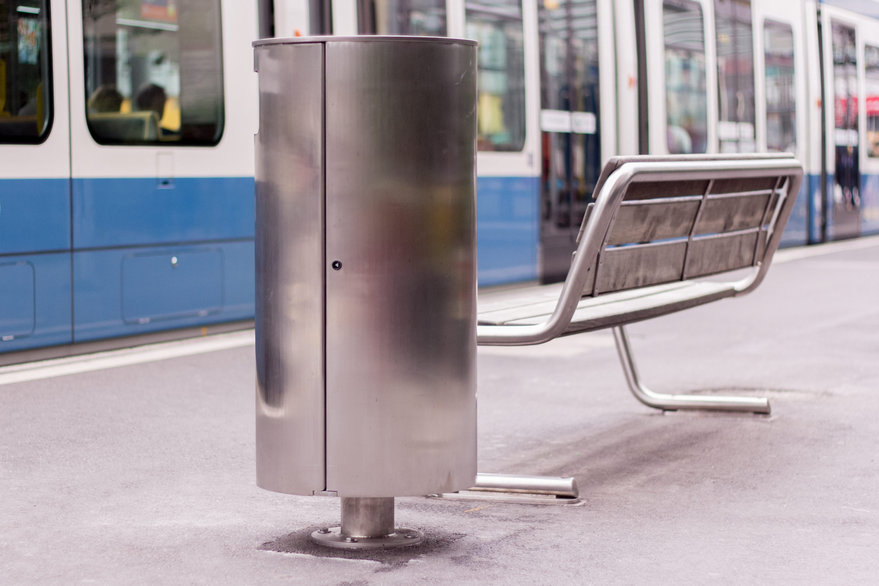 “Particular attention was paid to the moving parts of the Züri Kübel. They should be characterized by efficiency and durability. After all, a public waste bin in a highly frequented location has to be emptied up to eight times a day. Also important: the door should be able to be opened even if the waste bin has been damaged.” 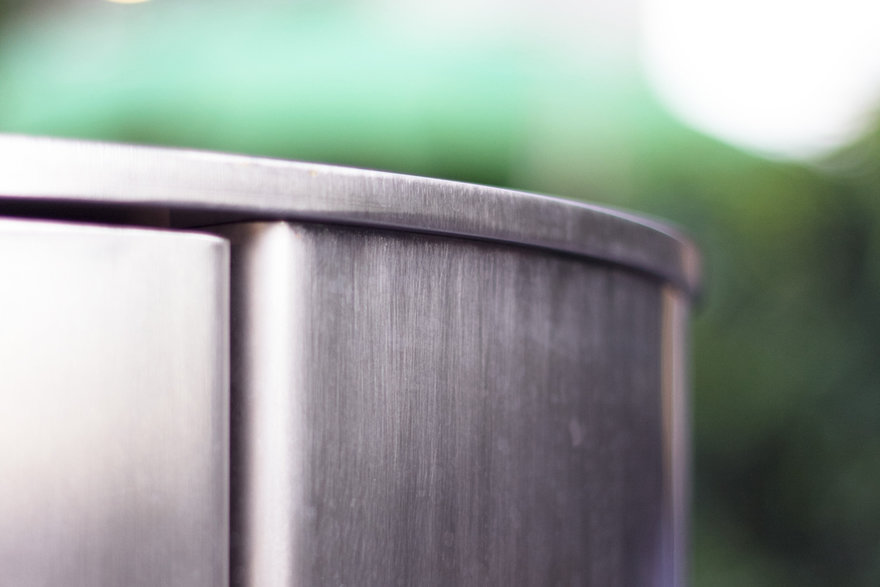 “We have also developed a special fastening system for the rubbish bags for the object, so that they can be hung up securely and without slipping, and also make them easier to empty. All parts and functions have also been tested for their weather resistance. The Züri Kübel also scores with its easy assembly and cleaning.” 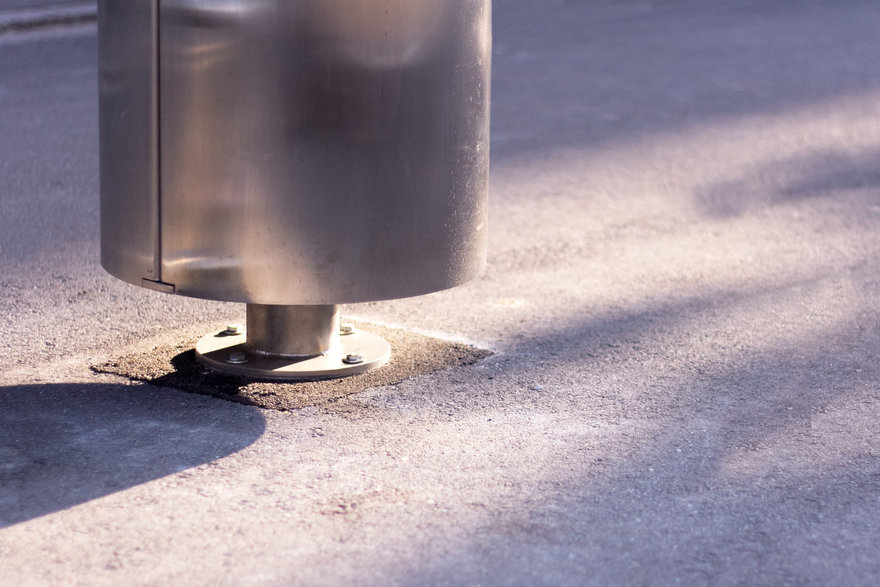 “The city of Zurich’s new waste bin not only holds 110 liters of waste, it also includes a dog waste bag dispenser and an ashtray. The latter is integrated into the lid and intuitively simplifies the disposal of cigarettes.” 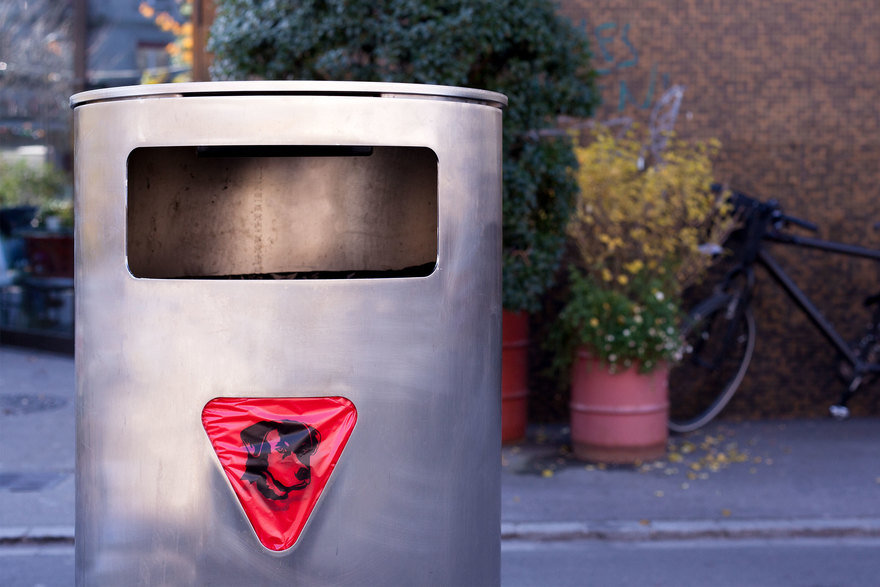 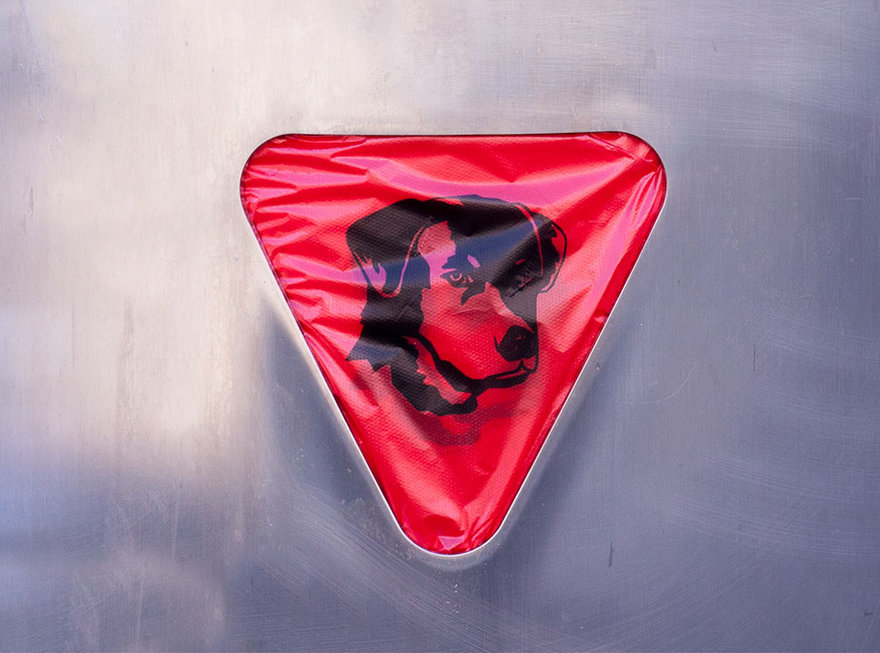 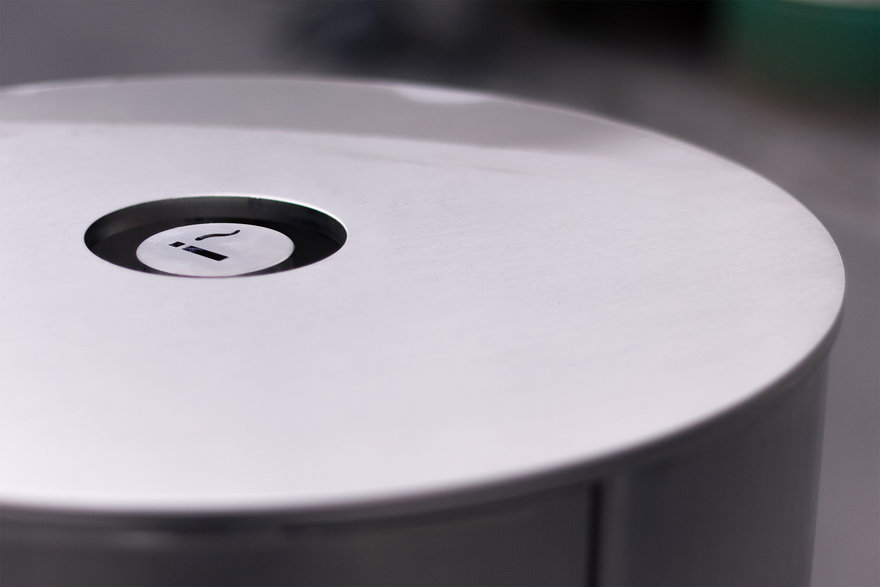 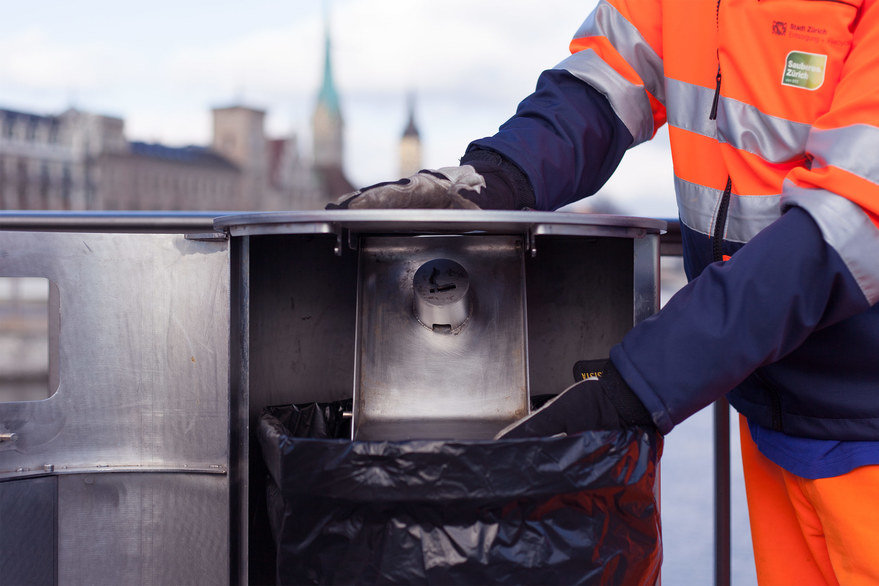 All of this might sound insignificant to you, so it’s worth explaining the design that Hunziker’s Züri Kübel is replacing. The incumbent design is the Züri “Shark” or “Litter Shark,” so named because of its angled head: 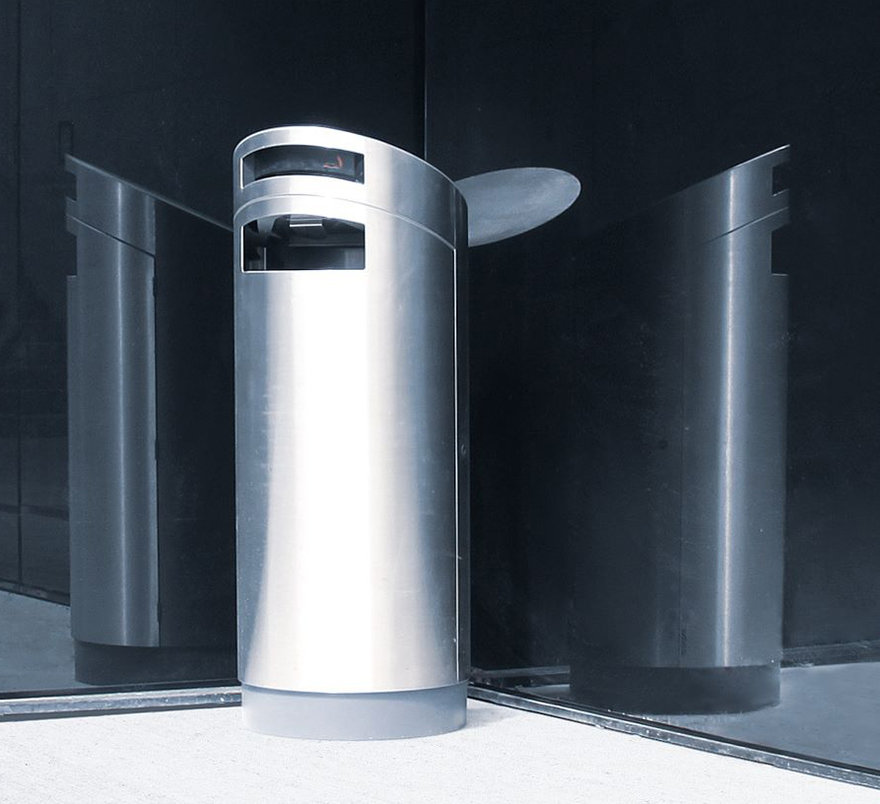 Designed in 2003, the Shark was a darling in design circles for its sleek look. However, it had its problems. First off the top slot is for cigarettes. Workers had to empty this bin separately. Secondly, people in Zurich in 2003 didn’t eat outside very much. Today, however, it’s common to buy lunch and eat it on a bench. The Shark’s mouth would clog. Thirdly, the design of the can made it difficult to open when it snowed or if it became damaged. 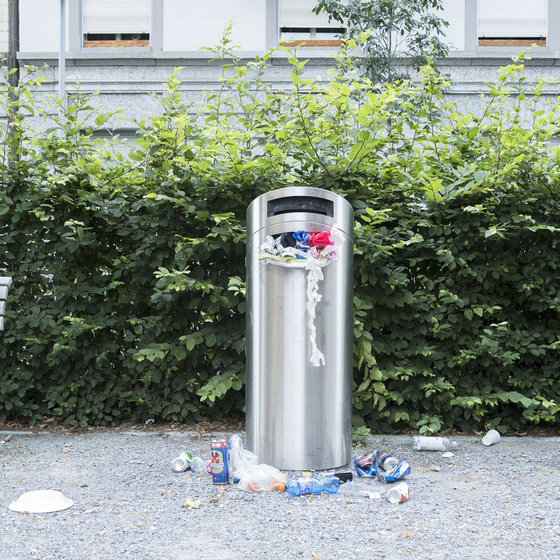 Consider the points made in this interview with Zurich Head of Waste Management Daniel Aebli, being grilled on the new design by Zurich’s Daily Indicator newspaper. Particularly fascinating is why garbage workers wanted the angled head of the shark to go:

Daily Indicator: Mr. Aebli, you want to replace the 2,300 litter sharks with a new, cheaper model. Witikon has only just introduced the sharks, are they going away right away?

Daniel Aebli: No, the littershark will be seen in Zurich’s cityscape for another two decades. We only replace the sharks that become unusable for any reason. And wherever we set up new buckets, the new Züri bucket will also go.

The main reason for this is the fast food packaging, which is getting bigger and bigger. Couldn’t you have simply given the shark a bigger mouth?

That’s right, the shark has a birth defect: its small mouth. The trend that the people of Zurich are increasingly eating outside is now becoming his undoing. The bags and boxes clog the slot. But the new bucket has other advantages. We developed it together with the employees from the front. The sacks hold up better, don’t fall out of their holders when you drop something heavy, the ashtray is on top, the door can be opened easily even in snow or on gravel surfaces, and the bucket again has a horizontal lid.

On which then masses of pizza boxes pile up at the weekend.

In fact, the straight lid was a request from our employees. You no longer have to pick up the pizza boxes from the floor.

But isn’t that how water flows into the ashtrays and finally the brown soup over the garbage men’s fingers?

Don’t worry about the soup in the ashtray: people wear gloves when they work. What matters more to them is that the new ashtray is much easier to empty.

ERZ bows to the fast-food providers with the larger throw-in. Couldn’t you have made them responsible and demanded, for example, that they offer reusable tableware?

There is no legal basis for this. And while there’s a lot of room for improvement in this regard, our job is to make sure people know how to dispose of their waste properly, not to educate them. Anyone who has ever tried to stuff a salad box into the shark without getting dirty will definitely thank us.

Speaking of educating: Doesn’t the larger hole encourage you to throw in the 35-liter bag from home?

The vast majority of people in Zurich dispose of their waste correctly. And there are people who dispose of illegally, regardless of the size of the throw-in.

The people of Zurich were so proud of the littershark. Some say they told their foreign visitors Zurich is so clean because disposing of it in the shark is so much fun.

It’s exciting how the predator littershark arouses emotions. But the city doesn’t define itself by the design of its rubbish bins. Irrespective of this: I value the practical advantages more than the design. In addition, the Züri bucket is easier to dismantle – for example for major events. And it’s only going to get cheaper. We don’t buy the buckets with revenue from fees, but with tax money, and we have to use this responsibly.