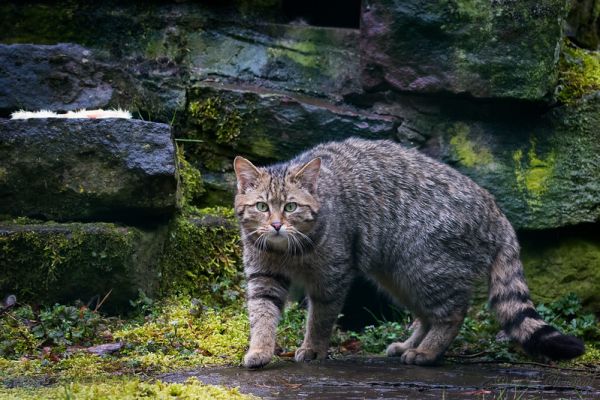 Men became friendly with wolves and began to selectively breed them, leading to domestic dogs that range from Irish wolfhounds to teacup chihuahuas. But cats are still pretty much the same as their wild ancestors, the European forest cat (felis silvestris silvestris) and Southwest Asia/North African wildcat (felis silvestris lybica). Experts believe this is because their association with humans was initiated by the cats themselves. They hung around where humans stored food, because that’s where the mice and rats were. Humans accepted the cats as they were for their pest control services, while wolves needed to be improved in order to safely mingle with people.

A study from 2017 looked at the genetics of over 200 cats, from all five wild subspecies, along with cat remains from stone age Romania, and even Egyptian cat mummies, and found that f. lybica in the Near East in 4,400 BCE, and in North Africa around 1,500 BCE, gave rise to the domestic cat, likely because it was here where the earliest agricultural civilizations occurred.

Still, cats existed unchanged through thousands of years—essentially until the Middle Ages, before selective breeding, the typical activity of domestication, began to give rise to more unique types of cats.

“I think that there was no need to subject cats to such a selection process since it was not necessary to change them,” said evolutionary geneticist and study coauthor Eva-Maria Geigl to National Geographic. “They were perfect as they were.”

Agree or not, you’ll find out more about the domestication of cats at Good News Network. -via Strange Company