I used to drive an ambulance, and like most crews, ours often mingled with cops on-site and knew them well. One of them told us about a trick he used during traffic stops:

After approaching the car and conversing with the driver and/or passenger, if something seemed fishy he would surreptitiously remove his walkie-talkie and lower it to the ground while pretending to scratch his leg. Unbeknownst to the car’s occupants, the walkie was then left standing up just outside of the driver’s door–switched on.

When the officer returned to his cruiser to run their paperwork, he switched on a second walkie in the cabin and could now overhear the conversation of the driver and passenger. A lot of times, he said, it was just scared teenagers and panicky chatter; but sometimes they’d refer to having something in the car they oughtn’t, and would even mention where it was stashed.

I have no idea if this was legal, but the following similar practice apparently is: When you call customer service, the call starts with “This call may be monitored or recorded for quality assurance and training purposes.” You’d assume this refers to the part where you’re actually speaking to a representative. But as it turns out, according to a 2005 article in the Times,

Most callers do not realize that they may be taped even while they are on hold.

It is at these times that monitors hear husbands arguing with their wives, mothers yelling at their children, and dog owners throwing fits at disobedient pets, all when they think no one is listening. Most times, the only way a customer can avoid being recorded is to hang up.

This longstanding, but little-talked-about practice has made its way to the modern-day customer service rep chat window. As Gizmodo reveals: 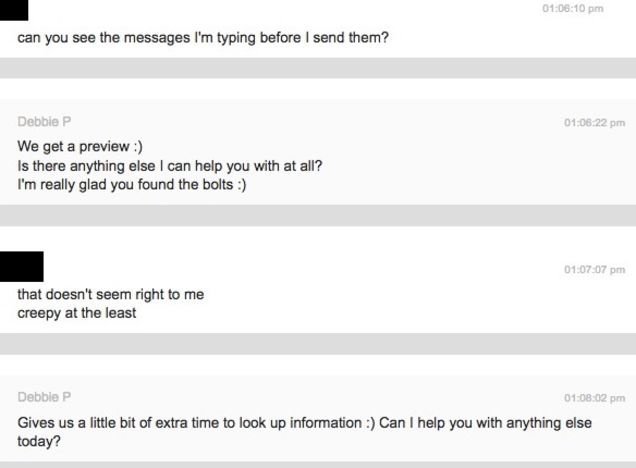 …A live chat service…offers a feature it calls “real-time typing view” to allow agents to have their “answers prepared before the customer submits his questions.” Another live chat service, which lists McDonalds, Ikea, and Paypal as its customers, calls the same feature “message sneak peek,” saying it will allow you to “see what the visitor is typing in before they send it over.” Salesforce Live Agent also offers “sneak peak.”

… This particular magic trick happens thanks to JavaScript operating in your browser and detecting what’s happening on a particular site in real time. It’s also how companies capture information you’ve entered into web forms before you’ve hit submit.

Rating Chat Agents Can See What You Type Before You Hit Send, and You're Being Recorded Even When You're On Hold is 5.0 / 5 Votes: 4
Please wait...
Loading...
Related articles