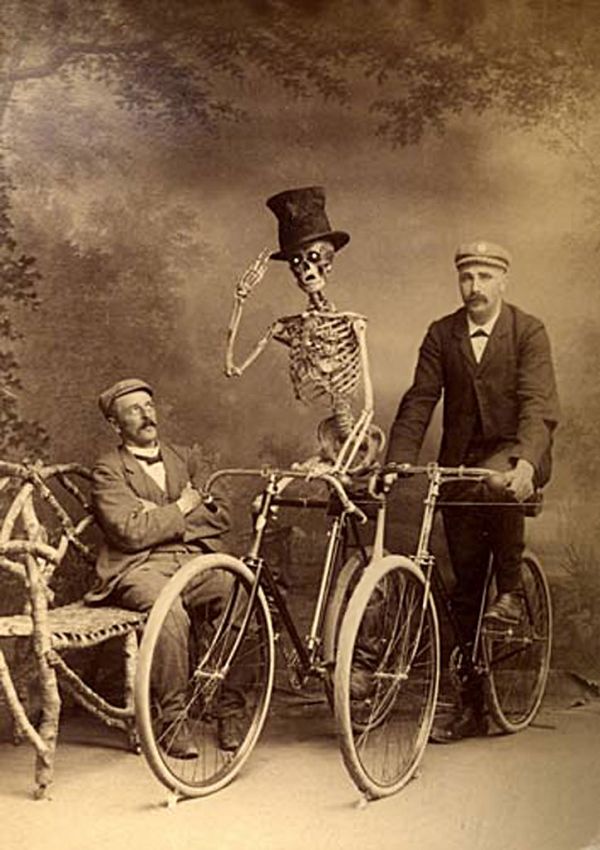 The year 1899 saw a shocking news story from Australia, in which a dead man won a bicycle race. For this to be at all plausible, you must know that 23-year-old James Somerville was very much alive at the start of the race, but died on the last stretch where he led the field of 50 competitors.

At the start he quickly forged ahead, closely followed by another crack rider named Percy Cliff. They left 48 riders away in the rear and shot around the track almost wheel to wheel. When within 25 yards of the tape Somerville, who still led by half a wheel, was seen to relax his hold on the handlebars. His pedals whirled around, however, and he pluckily held his position. Five yards from the tape Cliff put on a tremendous spurt and struck Somerville’s hind wheel, shooting the machine with its then almost inanimate burden, like a rocket under the tape.

The crowd yelled wildly, but silence ensued when Somerville, after crossing the tape, plunged head foremost from the machine. When picked up he was dead. Physicians who examined his body said he must have had an attack of heart failure on the last lap. Jackson [MI] Citizen Patriot 25 February 1899: p. 1

It was in all the papers, so it must be so, right? It turns out that in the month between the time the race was held in Australia and when the story was published in the US, a lot of details were dropped, assumed, and embellished. Read the true story of James Somerville, who both died and won the race, but not as it was reported, at The Victorian Book of the Dead. -via Strange Company