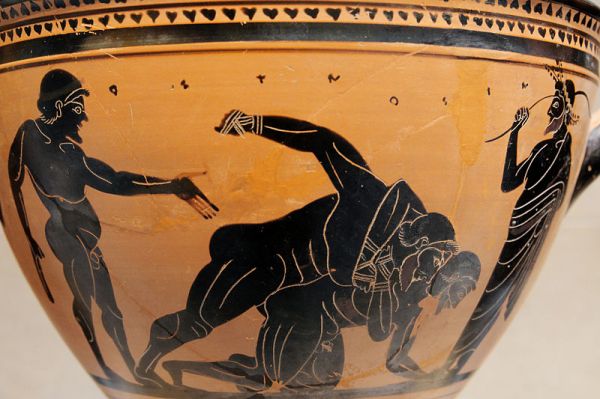 In the ancient Olympic competitions in Greece, the most popular event was pankration. Pankration is best described as a fighting style that is a combination of boxing and wrestling, with a kind of “anything goes” attitude. Spectators loved it.

Beyond, of course, the good family fun aspect of watching a couple of guys beating the crap out of each other, the popularity of pankration with ancient people over other similar sports is largely attributed to them believing that pankration represented “the ultimate test in strength and technique”. This differentiated it from boxing and wrestling of the age, which tended to be won by whichever man was biggest, with skill a secondary factor unless the two men were more or less in the same league of one another in size.

This trend is no better typified than by the wrestler known as Milo of Croton who was able to dominate the ancient wrestling world for two decades by being too big for any of his opponents to grab, lift, or push over. Because the main goal of ancient wrestling was to knock your opponent over three times, none of Milo’s opponents could score a point against him. As for him, he would simply grab his foe in a bearhug and violently slam them to the ground. Amusingly, Milo was eventually defeated when a young wrestler called Timasitheus did nothing but run in circles away from him until Milo reportedly fainted from exhaustion.

Then there’s the story of Arrichion of Phigalia, who went for his third pankration Olympic championship in 564BC. Oh, he won that one, too, but was already dead when the fight was over. Read the story of how he went into the Olympic history books in a manner no one would ever want to emulate at Today I Found Out.