“Gender identity and the fact that I no longer live with or wish to be related to my biological father in any way, shape or form,” stated one of billionaire Elon Musk’s children as the official reason in a petition for a name change, recognition of change of gender, and issuance of a new birth certificate.

Back in April, the 18-year-old teenager made the filing with a Santa Monica court shortly after her birthday. The daughter of Musk and Canadian author Justine Wilson, who were married from 2000 to 2008, decided to legally change her name to Vivian Jenna Wilson, taking her mother’s former surname and coming out as a trans woman. Although a couple of months have passed since she made the initial request to sever all ties with her father, the news was first reported by TMZ over the weekend.

The internet has been overflowing with reactions and discussions about this whole situation. Twitter users wasted no time in typing out spot-on insights about Musk’s recent transphobic comments and offering an outpouring of support to Vivian, whose hearing on the name change is set for Friday. Continue scrolling to find out how the whole ordeal unfolded and be sure to share your thoughts with us in the comments below.

In April, Elon Musk’s daughter filed to change her name to reflect her gender identity, revealing she identifies as a trans woman 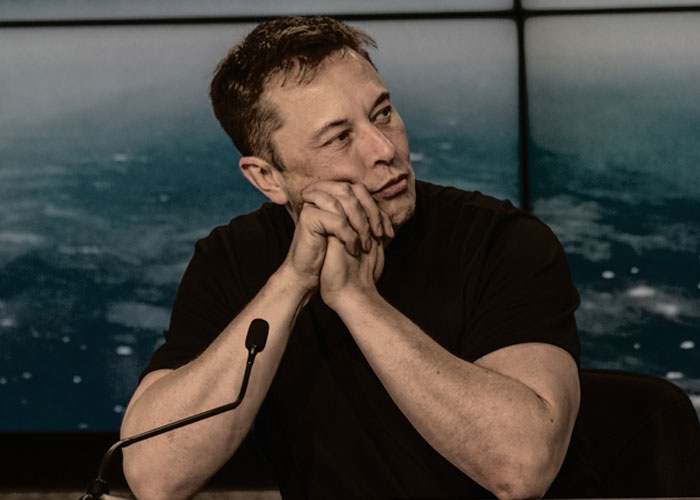 She is changing her name to Vivian Jenna Wilson, taking the maiden name of her mother Justine Musk 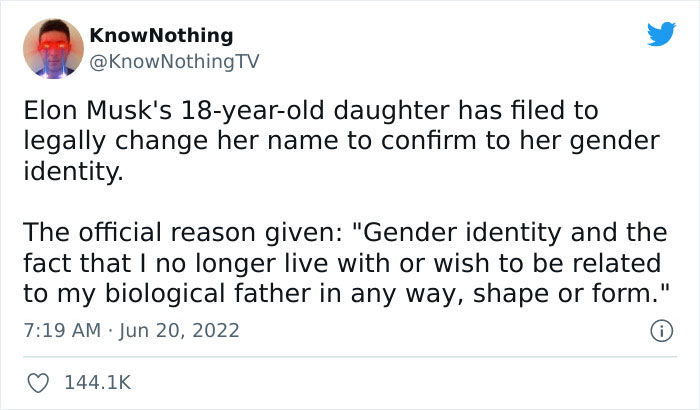 The official document was shared online, stating the official reason for the petition 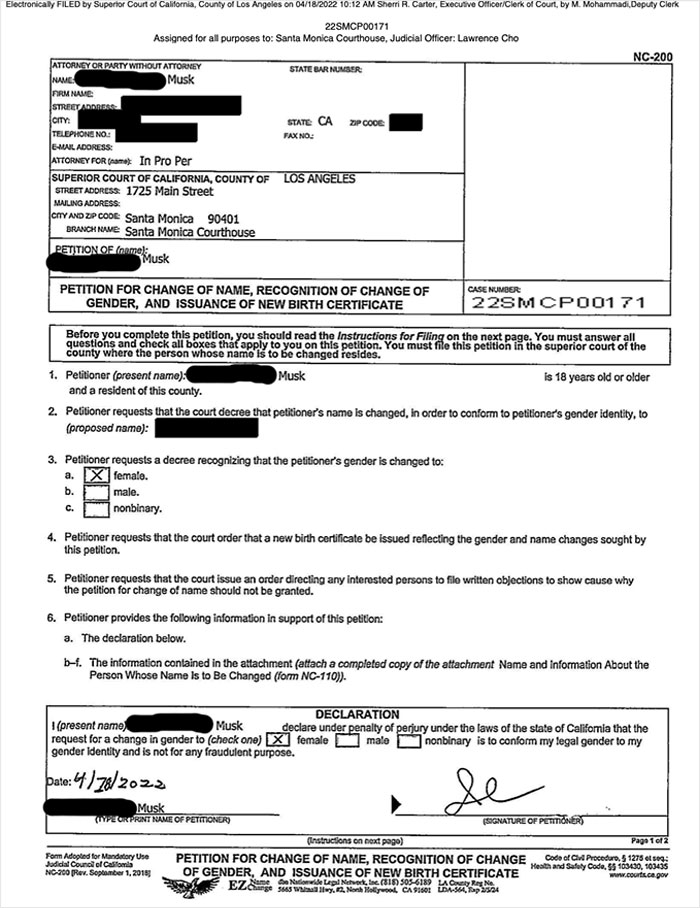 Vivian’s mom was very supportive of her daughter’s decision 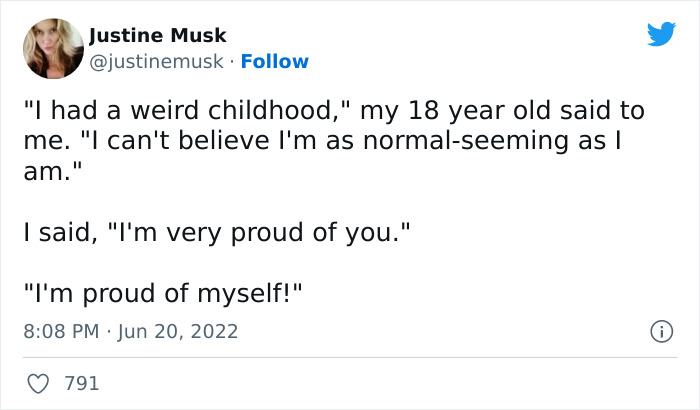 While Musk is yet to comment, he has tweeted some transphobic comments in the recent past 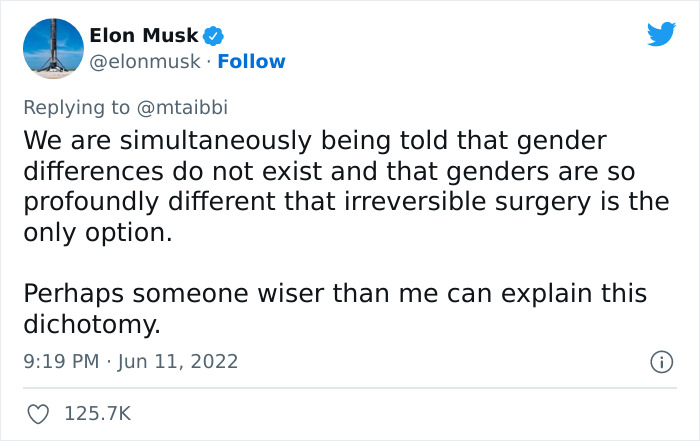 People started calling out Musk for his transphobia, here’s what they had to say 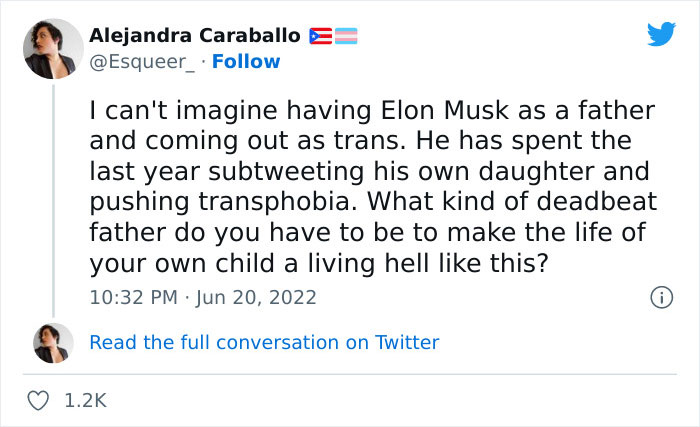 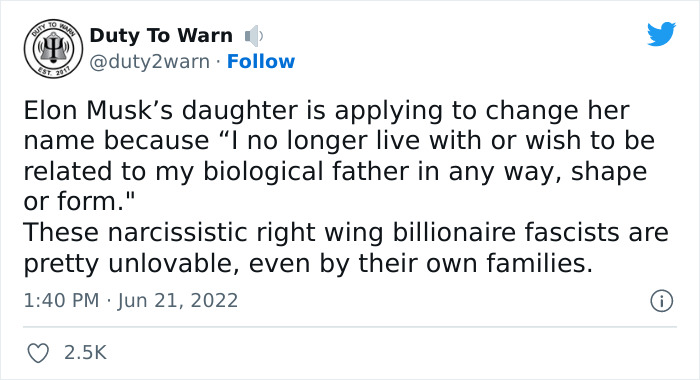 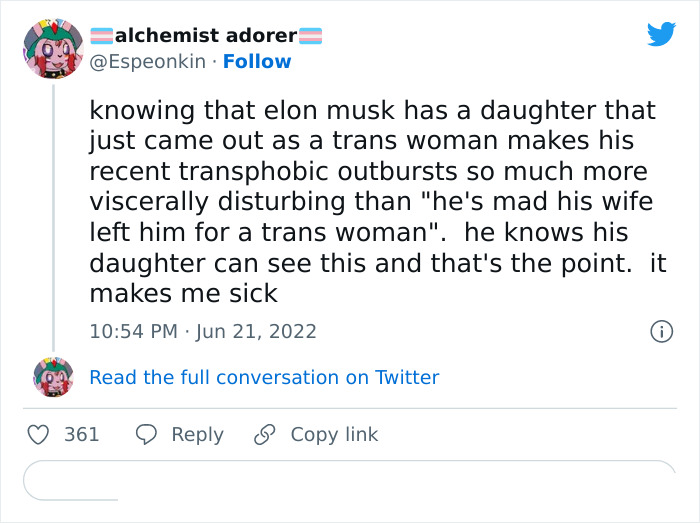 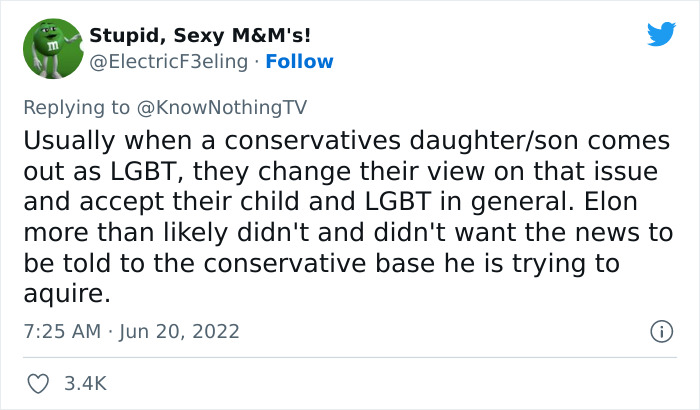 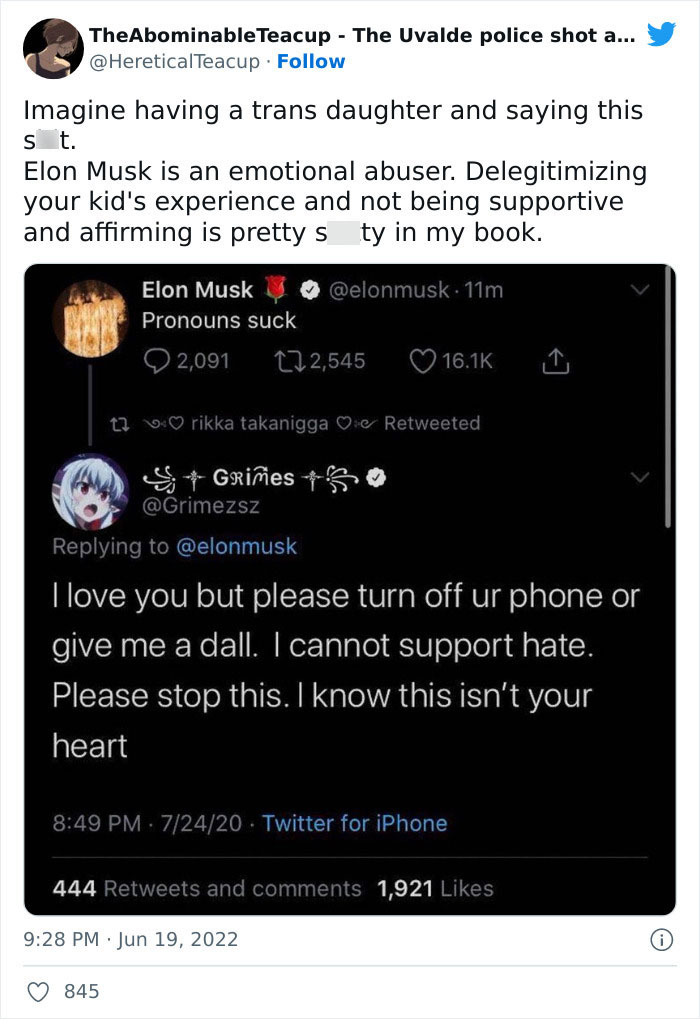 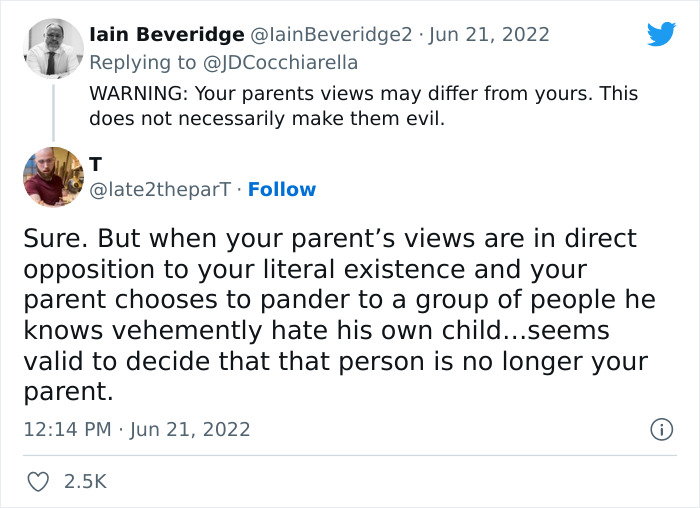 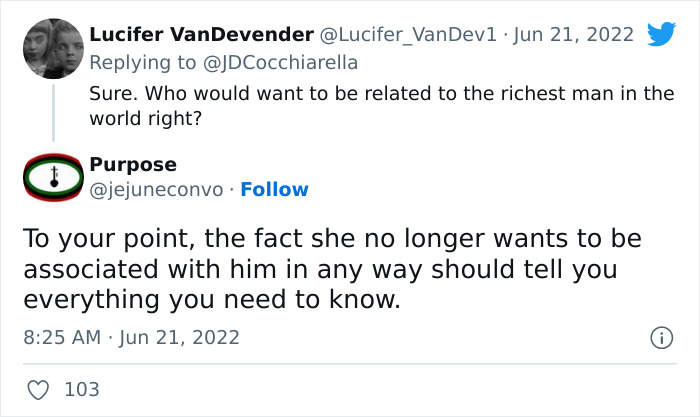 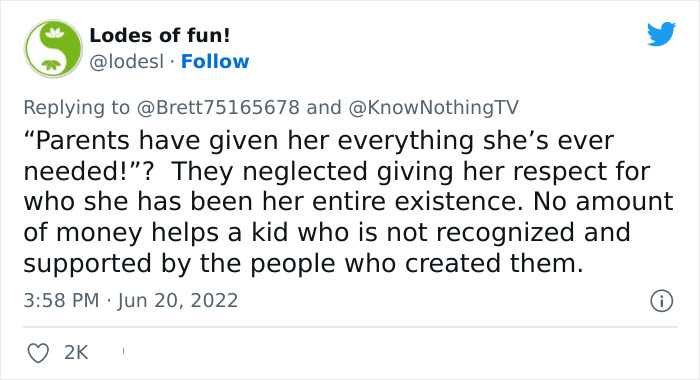 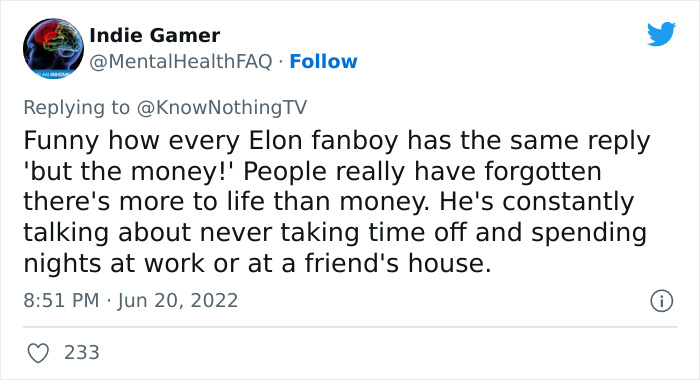 Others offered support to the 18-year-old daughter 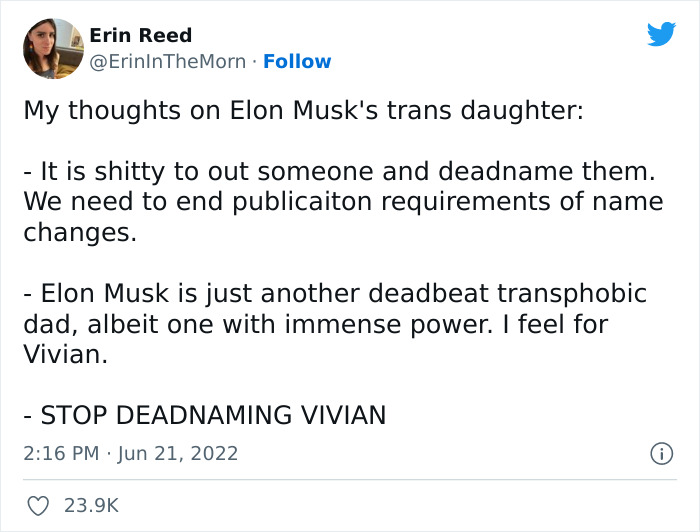 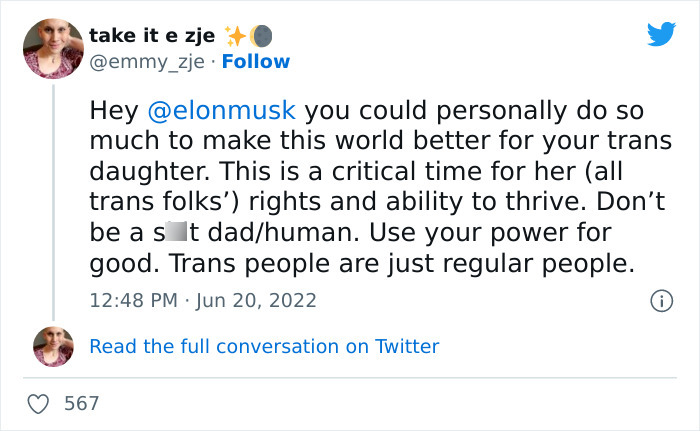 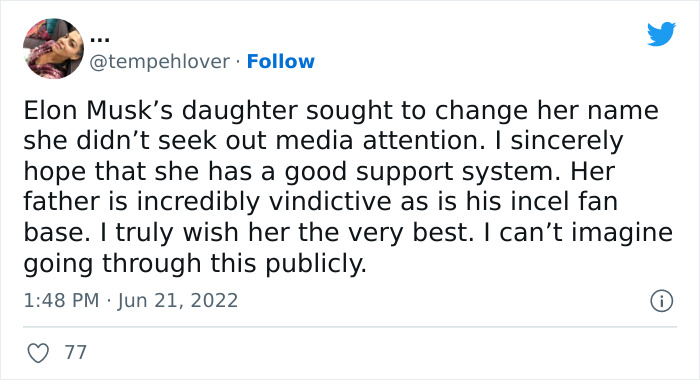 The post Elon Musk’s Daughter Comes Out As Trans And Says She Wants To Cut All Ties To Her Father, People React With Insightful Comments first appeared on Bored Panda.