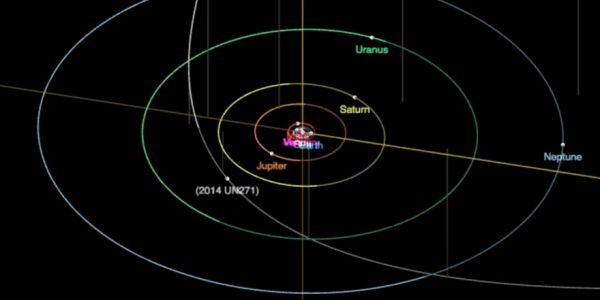 As kids, we learned that our solar system is made up of nine planets (now eight) and the sun. Oh yeah, there’s the asteroid belt. And the moons of other planets. And solar winds, comets, and the Oort cloud. But even as we learn about exoplanets and other galaxies, our own solar system hides a lot more mysterious objects that are too small and far away to know much about. One such object, designated 2014 UN271, revolves in a manner that brings it close enough to study only once every 600,000 years! What’s more, that time is coming soon. But what is it? Astronomers call it either a tiny planet or a really big comet.

But by far the most intriguing thing about 2014 UN271 is its orbit around the Sun. This thing is extremely eccentric, journeying between the inner solar system and the Oort cloud that marks the boundary of interstellar space over a period of 612,190 years.

And it turns out, astronomers are about to witness the closest pass of this incredible round trip. Currently, 2014 UN271 is about 22 Astronomical Units (AU) from the Sun (for reference, Earth is 1 AU from the Sun). That means it’s already closer than Neptune, at 29.7 AU. And it’s not stopping there – it’s already traveled 7 AU in the last seven years, and at its closest in 2031, it’s expected to pass within 10.9 AU of the Sun, almost reaching the orbit of Saturn.

Considering the relatively short time that mankind has studied the stars with telescopes, you have to wonder how many other distant objects are orbiting the sun without us ever getting the chance to see them. Read more about 2014 UN271 at New Atlas.  -via Kottke