It’s common sense that everyone should respect their servers. The way you treat the employees working at restaurants and cafes tells a lot about you—whether you’re a decent human being or if the Sorting Hat should have put you into Slytherin House at Hogwarts.

However, it’s inevitable that those working in the food service industry will eventually run into incredibly rude customers. Some of them might be masquerading as the most polite people you’ll ever meet. That is until they take off their (metaphorical) masks and show their true faces.

Redditor u/tamiraisredditing shared what happened when a customer left her a $100 tip to impress her date. She told the r/TalesFromYourServer online community how he later came back to threaten her to reduce the tip. Scroll down to learn what happened next! It’s a long read, but we think it’s worth your time. So put the kettle on and make yourself a nice hot cut of tea.

The perfect customer can turn into the rudest person ever, the moment they don’t have to impress anyone anymore 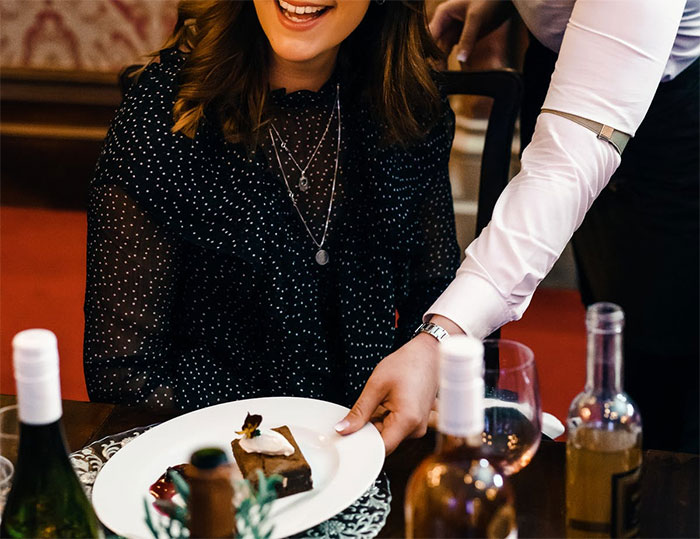 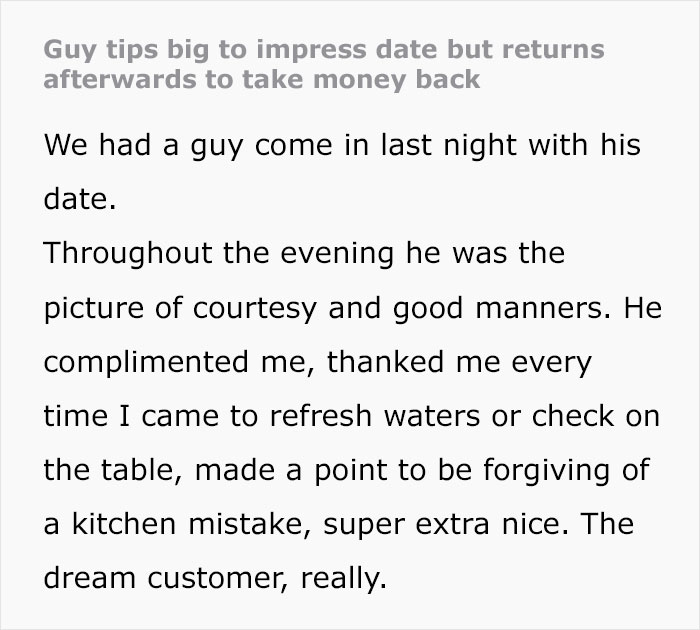 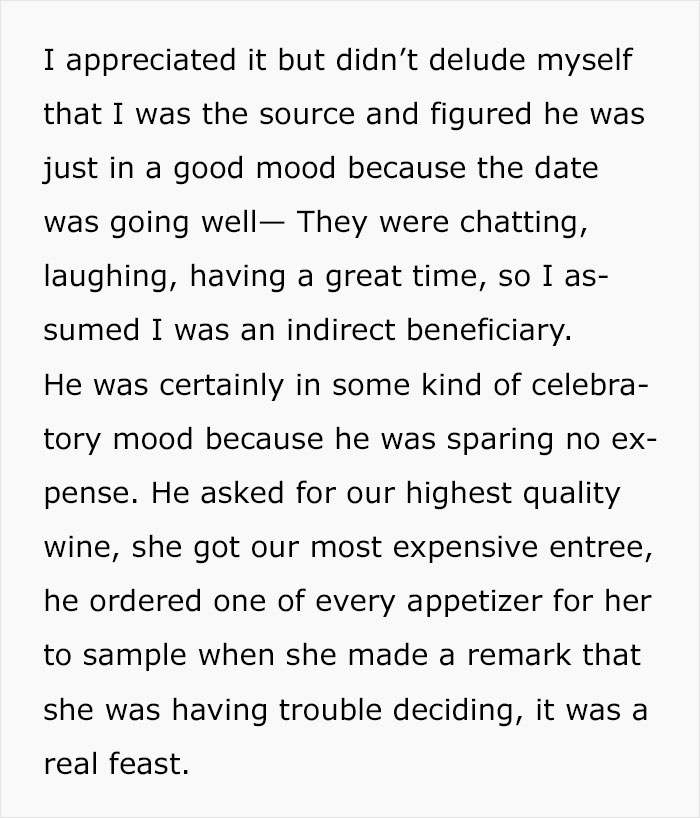 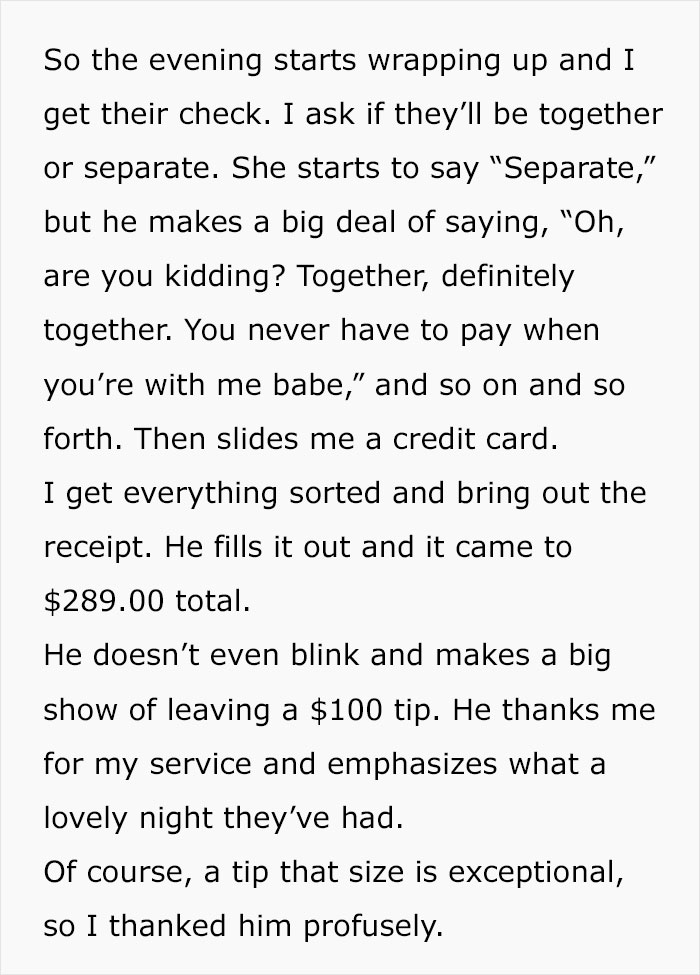 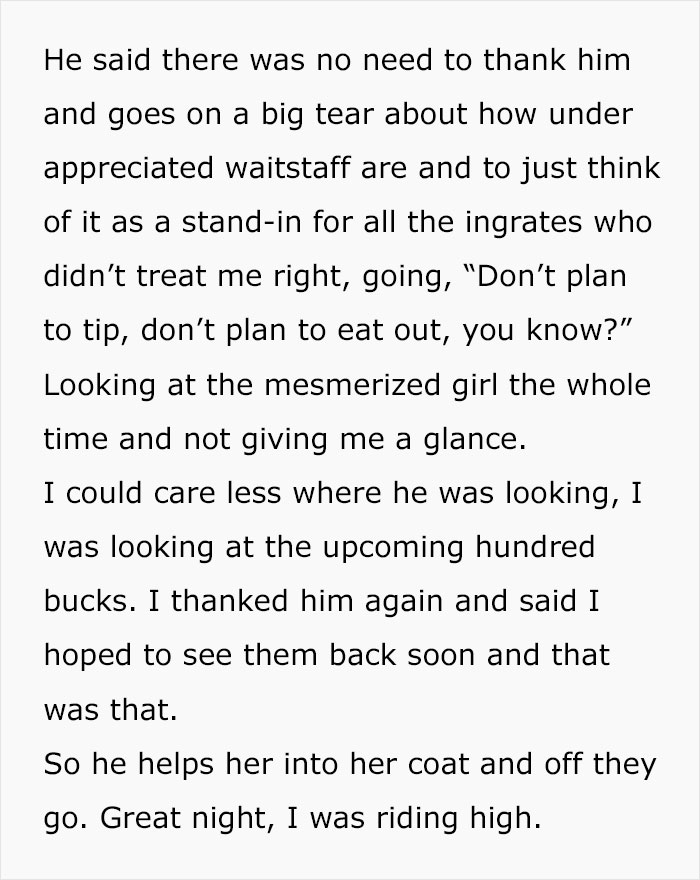 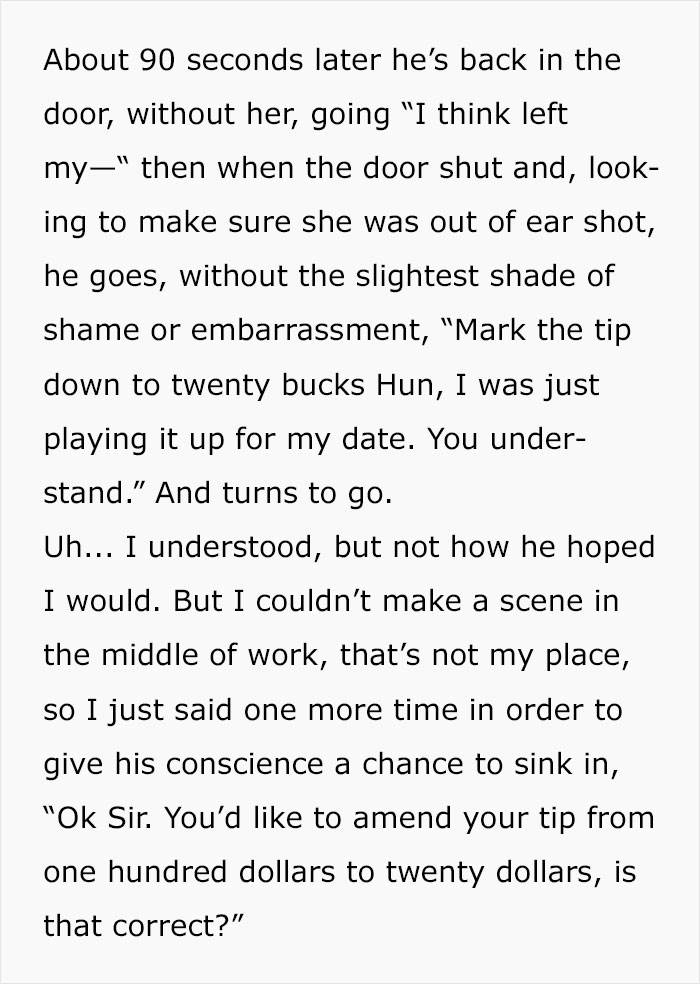 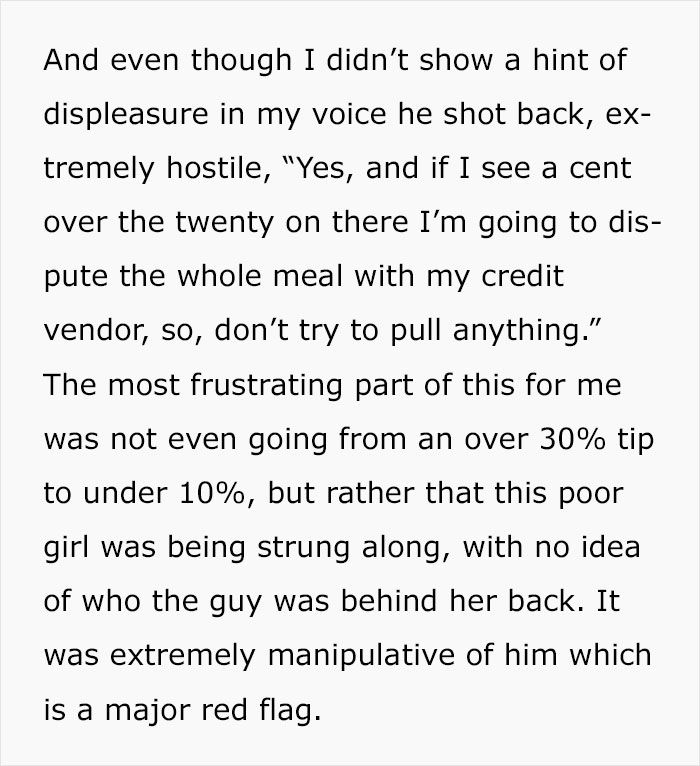 However, the server didn’t want to let the customer get away with his horrible behavior. She decided to teach him a lesson he’d never forget 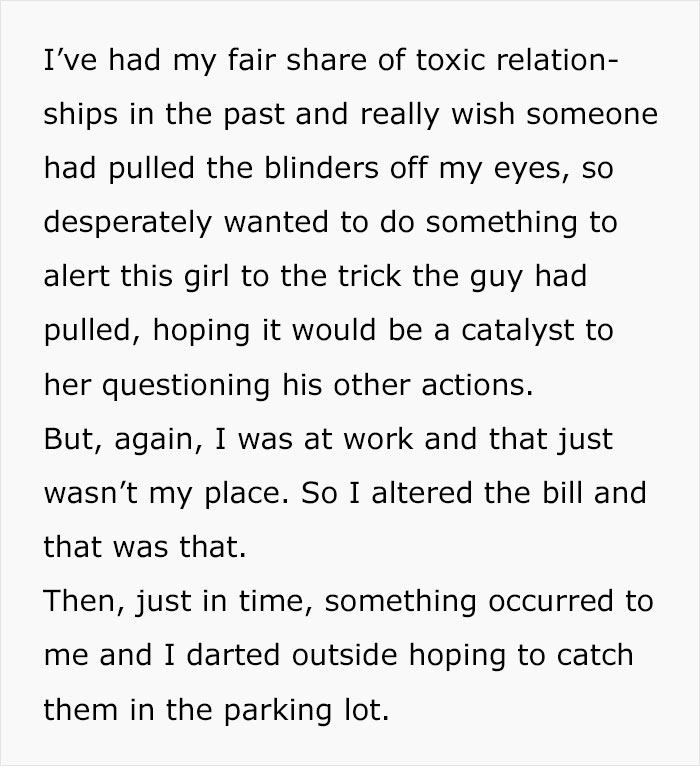 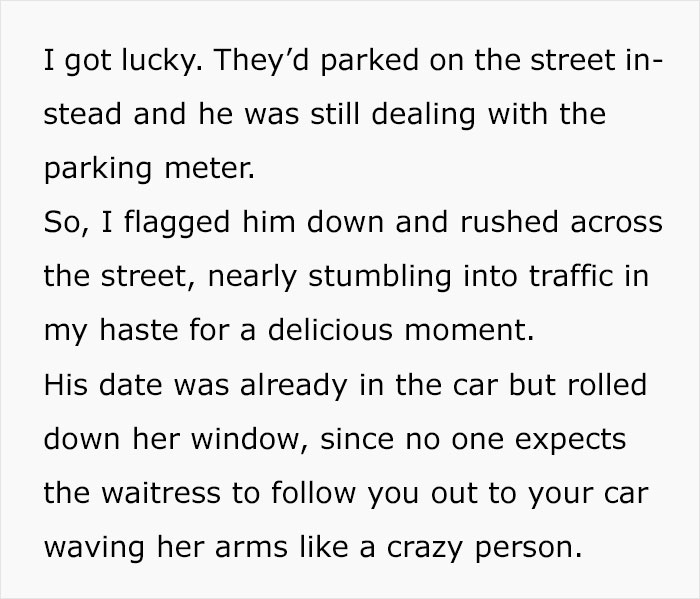 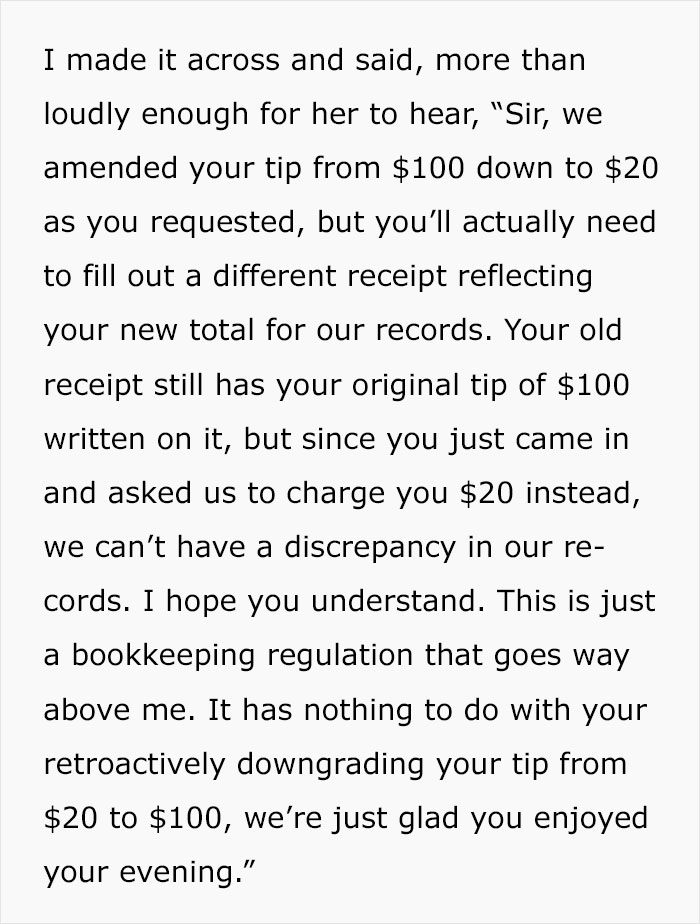 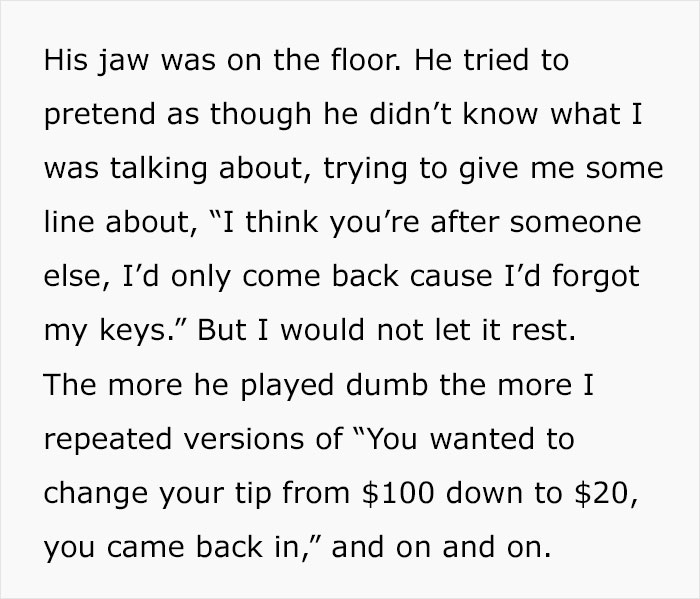 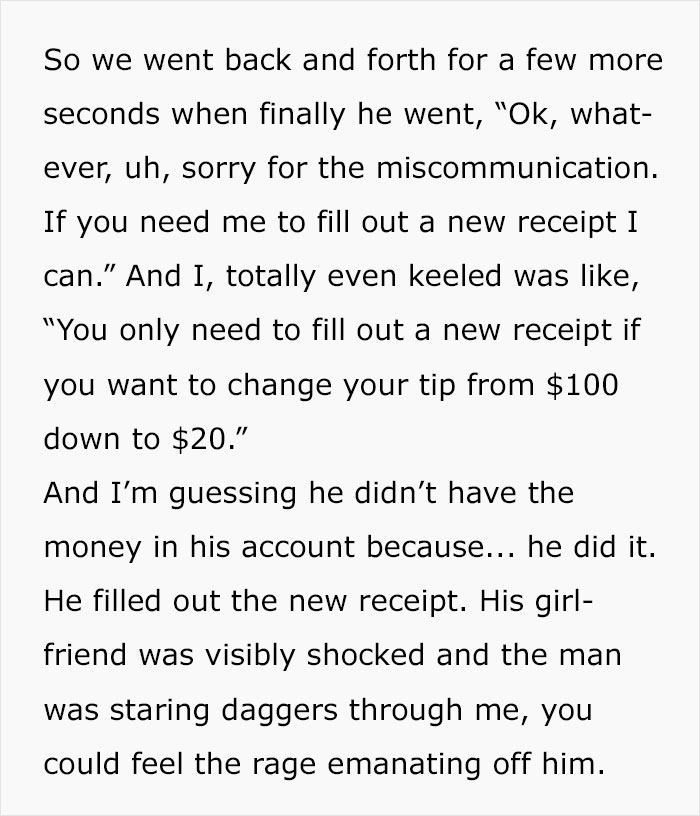 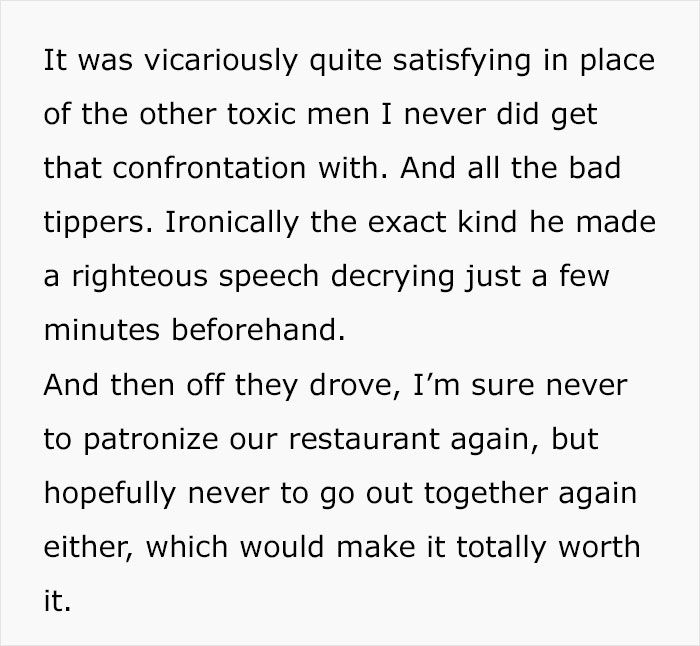 This isn’t the first time that Bored Panda has featured Tamira’s stories from her restaurant job. Earlier, we wrote about how a rude local ‘celebrity’ ran away without paying and then ended up getting caught.

Tamira shared with Bored Panda some insights about her job and the entire industry. “That huge musician Seal was in our restaurant once and he could not have been nicer. Tipped well, made friendly, genuine, conversation with the staff, just radiated kindness. It was really an encounter I’ll remember for the rest of my life,” she said that there are very positive stories from her job as well.

According to the server, the biggest challenge before the Covid-19 pandemic for anyone working in the food service industry was the imbalance between long hours full of hard work and getting very little pay for it. For some servers, working full-time didn’t earn them enough to support themselves.

“If standard wages do not begin to catch up to inflation, we will be unable to maintain a place in the developed world,” Tamira said, adding that things have gotten “significantly worse” since the start of the pandemic.

The server told Bored Panda that more customers have been attacking restaurant staff members and threatening them, too.

“Not just over masks and other safety requirements, either. It’s as though the stress of the last year has amped societal entitlement up to a new degree. I spend more time now soothing tantruming adults than I do running food,” she said.

“A customer followed me out to the parking lot and tried to take down my license plate because I charged him for extra ketchup, (as per our business policy, written on the menu),” the redditor said what happened to her recently.

“So, the biggest problem with being a server right now is, in short, that many people treat us as sub-human trash. Say hello, look us in the eye when you order, leave a tip, and don’t call us names or threaten us. Is it so much to ask?”

According to Tamira, a good server aims to make sure that everyone leaves the meal having had a nice time.

“The essence of being a great server is making sure everyone leaves the meal having had a memorable time,” she added. “I’m always on the lookout for anything extra I can do to make the night special for our guests. If I overhear a birthday mentioned, we bring out a piece of cake. If someone comes in wearing a Dolphins jersey, we’ll turn on that game if they’re playing. We take pride in our work.”

Tamira wants more customers to consider stepping in or saying something if they see someone else mistreating a server at another table. Especially if the server looks young and inexperienced at their job.

“The server may look unbothered, but that’s because it’s their job. ‘The customer is always right,’ is one of the only pieces of training many of us get. It is literally our job to be sure tables leave happy. We cannot argue with you. So, just because they’re smiling on the outside doesn’t mean they’re not offended, or even feeling unsafe, on the inside,” Tamira said.

“If you’re not comfortable saying something to the abusive customer directly, just find a manager and quietly inform them of what’s going on, they’ll take it from there. A lot of servers are students who are too nervous about losing the job or looking unprofessional to ask for help. And, as someone eating in the restaurant rather than working there, your words will carry far more weight with the harasser than ours would anyways.” 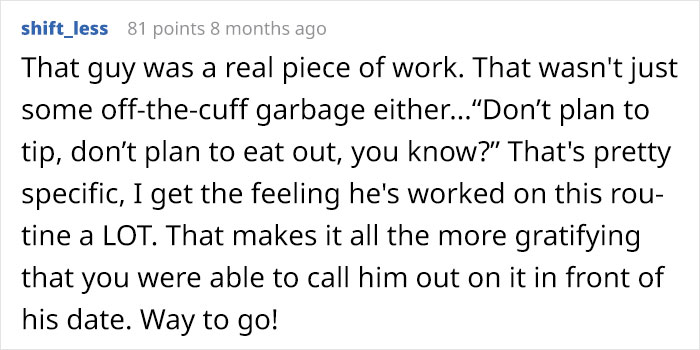 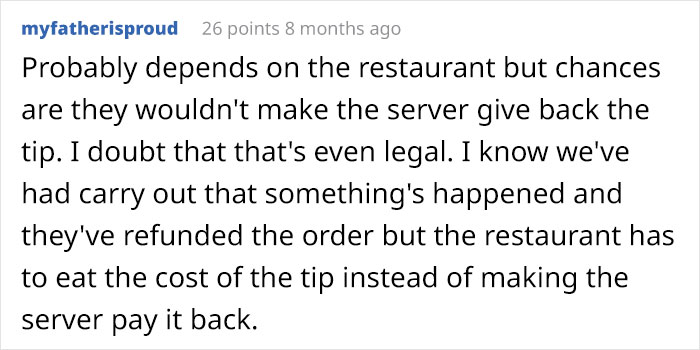 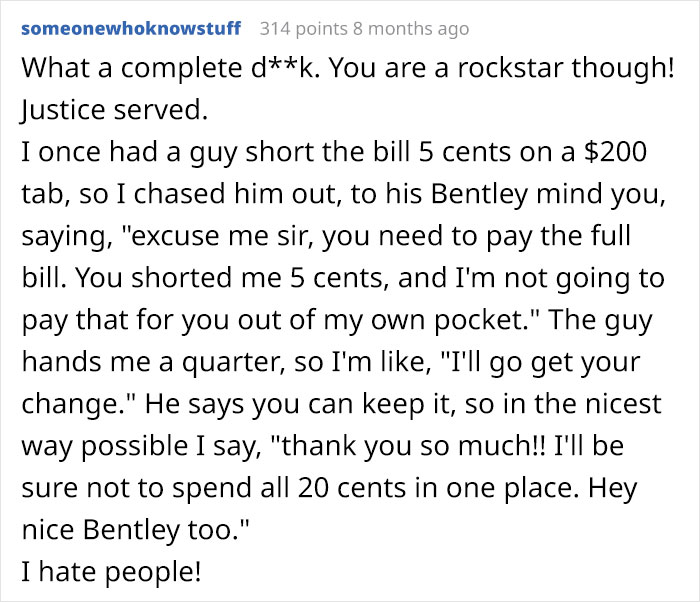 The post “Guy Tips Big To Impress Date But Returns Afterwards To Take Money Back”: Server Shares How She Got Revenge On Douchey Customer first appeared on Bored Panda.