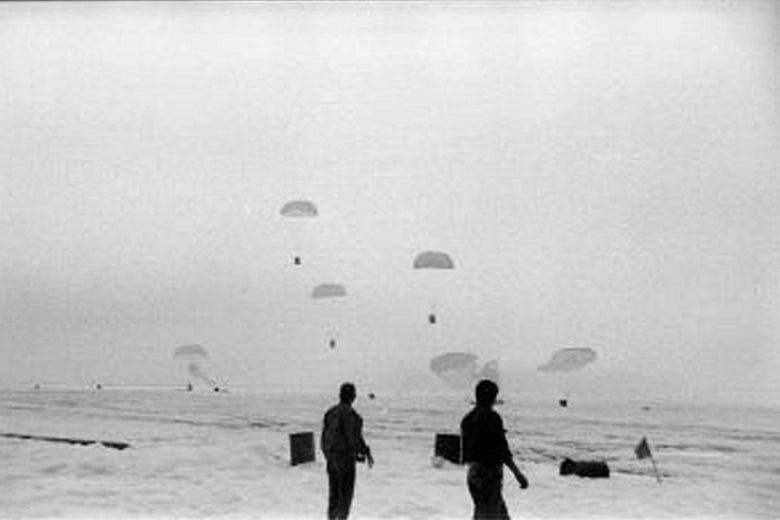 Humanity being as it is, it is inevitable that, at some point, one person will murder another in space. Legally speaking, how will that criminal case be adjudicated? Popular author Sam Kean writes in Slate that one possible precedent may be a 1970 murder perpetrated by one scientist upon another in a temporary Arctic research station. It all began when Mario Escamilla shot Bennie Lightsy, his boss, over a bottle of raisin wine. The locations of the murder was unusual:

Escamilla worked on T-3, also known as Fletcher’s ice island, a Manhattan-size hunk of ice that at the time was floating north of Canada in the Arctic Ocean, roughly 350 miles from the North Pole. T-3 had been occupied off and on since the 1950s, and 19 scientists and technicians were stationed there during the summer of 1970, studying ocean currents and wind and weather patterns.

Which nation had legal jurisdiction? It was unclear:

T-3 was technically run by the U.S. Air Force, but Escamilla was a civilian, so they couldn’t court-martial him. The nearest land mass was Canada, but T-3 lay well outside Canada’s territorial waters, so it had no jurisdiction there. Perhaps the United States could have claimed the ice island—similar to the many uninhabited “Guano Islands” full of rich, natural fertilizer that the U.S. government seized during the 1800s. But unlike the Guano Islands, T-3 was temporary—it would melt away in the 1980s—so under international law, no nation could claim it. Perhaps the law of the sea applied? After all, T-3 was in some sense the literal high seas, being high-latitude frozen seawater. Except, the law of the sea applies only to navigable areas, and T-3 wasn’t navigable.

A few days later, US Marshals arrested Escamilla and brought him back to the United States. Federal prosecutors in Virginia charged him, which was legally messy:

First, there was the question of whether the government even had the right to try Escamilla, given T-3’s legal limbo. Second, there was the question of venue. Technically, the marshals and Escamilla had landed in Greenland first on the trip back home, so according to international law, he should have been tried there. The U.S. government simply ignored this. Federal prosecutors also attempted to charge Escamilla under special maritime law for crimes committed on vessels, despite the fact that T-3 wasn’t a “vessel” in any real sense.

After an initial conviction and then appeals, Escamilla ultimately went free. But the case, Kean (who is not an attorney, I should note) argues, may suggest how complicated resolving space crimes could become:

About the only existing law governing space is the Outer Space Treaty of 1967. But the treaty focuses almost entirely on what nation-states can and cannot do (e.g., deploy nuclear bombs, seize celestial bodies). It’s virtually silent on what private companies or individuals can do—which suddenly seems like a glaring loophole given the rise of private space companies like SpaceX, which recently transported its first astronauts to the International Space Station. These private vessels are far murkier in a legal sense. […] So consider this scenario: a German woman poisons a Congolese man on a spaceship owned by a Chinese-Belgian conglomerate that’s headquartered in Luxembourg. Who the hell’s in charge then?