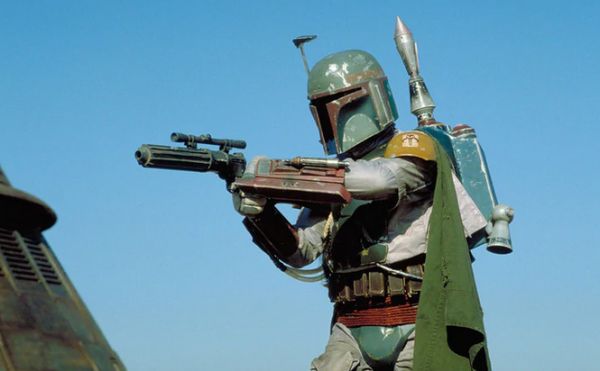 Boba Fett was a minor character in the 1980 movie The Empire Strikes Back. He was killed off in Return of the Jedi in 1983. Years later, the world was connected by the internet and suddenly Boba Fett was an “iconic character.” What? It turns out that the popularity of the mysterious bounty hunter hinged upon a certain age group of Star Wars fans who thought he looked really cool. It might have flown under your radar, but before The Empire Strikes Back, Fett was a cartoon character who appeared in The Star Wars Holiday Special. And he was already an action figure. Jason Fry tells of his Boba Fett experience.

The only thing he knew about the intergalactic bounty hunter, which made its brief debut in the 1978 Star Wars Holiday Special, was that he looked incredibly cool. With his identity hidden underneath a Stormtrooper-type mask, Boba Fett wore blue and yellow armor, a red cape, carried a jet pack and handgun, and roamed the galaxy without any affiliation. “He was the only good thing about it,” Fry remembers of the infamous cartoon. Once the 10-year-old had unboxed the mysterious mercenary, a year before the character’s official debut in The Empire Strikes Back, his imagination took over. “I probably thought up a hundred little Boba Fett stories using Kenner figures before I ever got to see Empire,” says Fry, who has since made a career writing dozens of Star Wars extended universe novels. “Everything about that figure was just so exciting.”

Fett’s quick death didn’t stop him. He got a backstory during the prequel trilogy in Attack of the Clones, plus a resurrection in the Expanded Universe. And now he’s the inspiration behind the Disney+ series The Mandalorian. Read a history of Boba Fett, from his original design process to his rise as a fan favorite at the Ringer. -via Digg