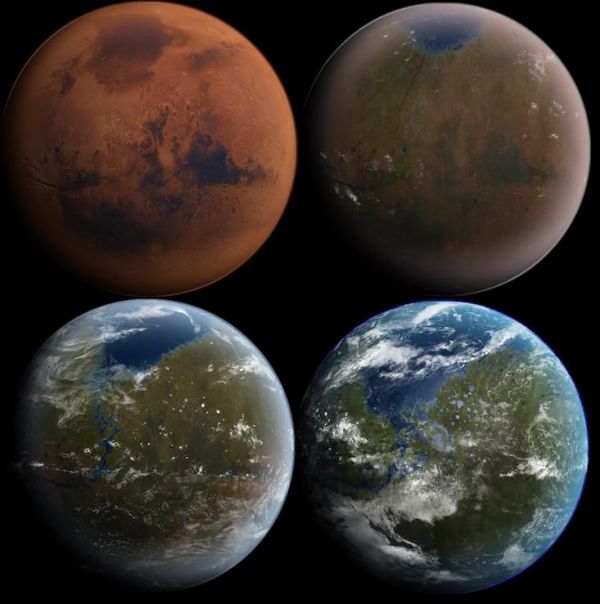 Colonizing Mars will be quite difficult, as the planet is cold and has hardly any atmosphere. So why is that? The difference between Earth and Mars is that we have a magnetic field that shields Earth’s atmosphere from solar wind. Mars once had an atmosphere, but lost its magnetic field a few billion years ago, and its atmosphere was stripped away, its water froze, and here we are. But James Green, director of NASA’s Planetary Science Division, thinks it may be possible to install an artificial magnetic field on Mars.

Mars, of course, is frigid and dry now, but Green said the dynamics of the solar system point to a time when the planet will warm up again. He said that scientists expect the gradually increasing heat of the sun will warm the planet sufficiently to release the covering of frozen carbon dioxide at the north pole, will start water ice to flow, and will in time create something of a greenhouse atmosphere. But the process is expected to take some 700 million years.

“The key to my idea is that we now know that Mars lost its magnetic field long ago, the solar wind has been stripping off the atmosphere (in particular the oxygen) ever since, and the solar wind is in some kind of equilibrium with the outgassing at Mars,” Green said. (Outgassing is the release of gaseous compounds from beneath the planet’s surface.) “If we significantly reduce the stripping, a new, higher pressure atmosphere will evolve over time. The increase in pressure causes an increase in temperature. We have not calculated exactly what the new equilibrium will be and how long it will take.”

Scientists believe it would take a very long time, even with a magnetic field, but there’s also the possibility of terraforming, or bringing in the gasses and life forms needed to make Mars a friendlier planet. Read about the idea at Nautilus. -via Digg

Rating How to Give Mars an Atmosphere, Maybe is 5.0 / 5 Votes: 5
Please wait...
Loading...
Related articles