The world is absolutely full to the brim with pearls of ancient wisdom—you just have to look! Some of them might be under your nose… no, like literally, on your T-shirt, your purse, or your pencil case.

Japanese-English translator Chris Pearce started up a witty thread on Twitter that immediately went viral. He shared how he uncovered the “many ancient secrets to living,” all stitched in English on products found in Japan, and it is thoroughly hilarious. The phrases are, at the same time, incredibly deep and absolutely nonsensical, and we love it.

We weren’t the only ones, though. Others started sharing the nonsense phrases they’ve found elsewhere. We’ve collected the best parts of the discussion with you, and it should bring a smile to your face whether you’re a fan of comedy, design, Japanese culture, or philology. You can share your thoughts in the comments, Pandas! Oh, and if you’ve got any similar examples of weird English phrases on random things, tell us all about them, too.

Bored Panda got in touch with comedy writer Ariane Sherine, from the UK, to hear her thoughts about the viral thread and weird, nonsensical English phrases. She also shared her advice for anyone who’d love to learn English but might find themselves struggling. Read on for our full interview with writer Ariane below. 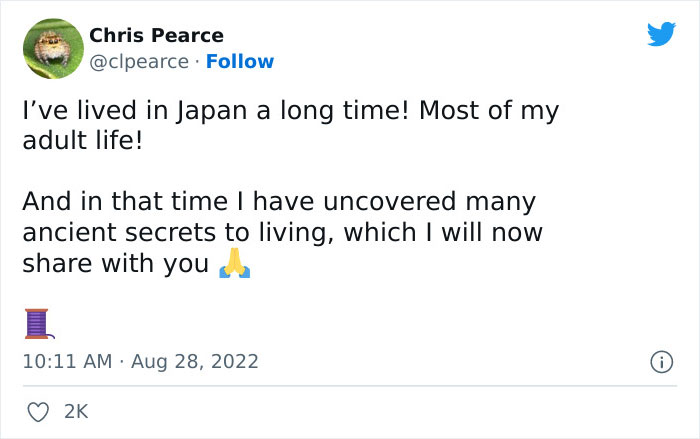 The English phrases are both incredibly deep and completely nonsensical. But above everything, they might make you chuckle 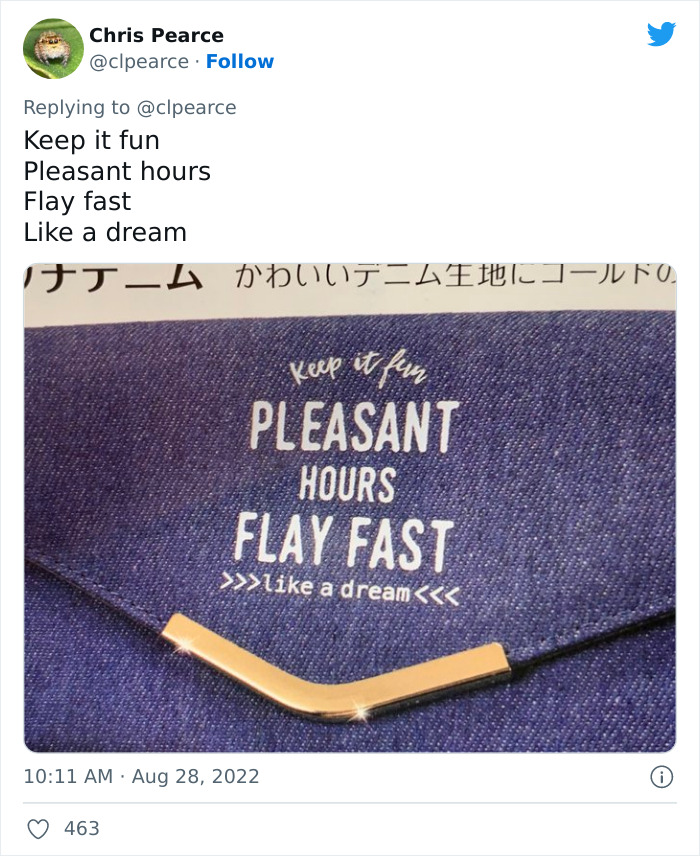 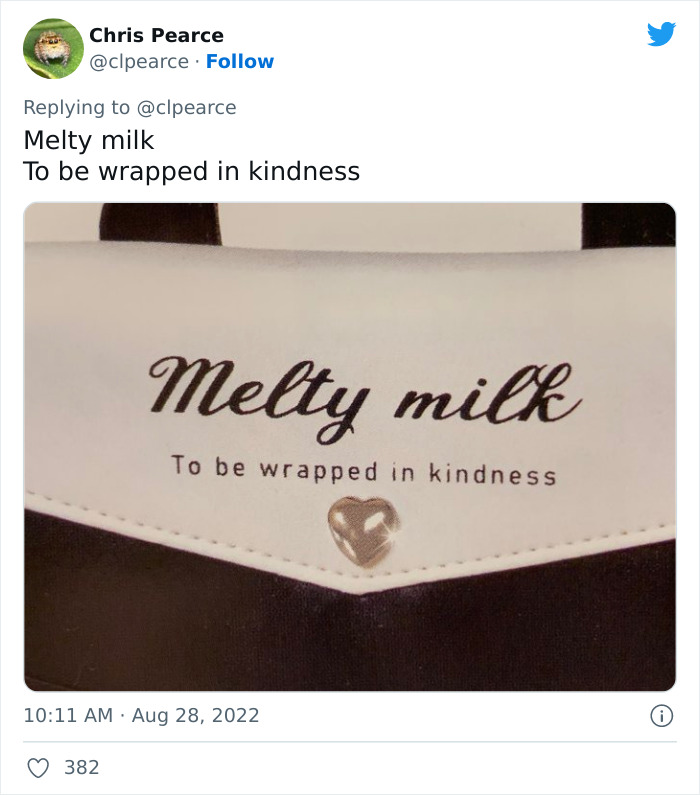 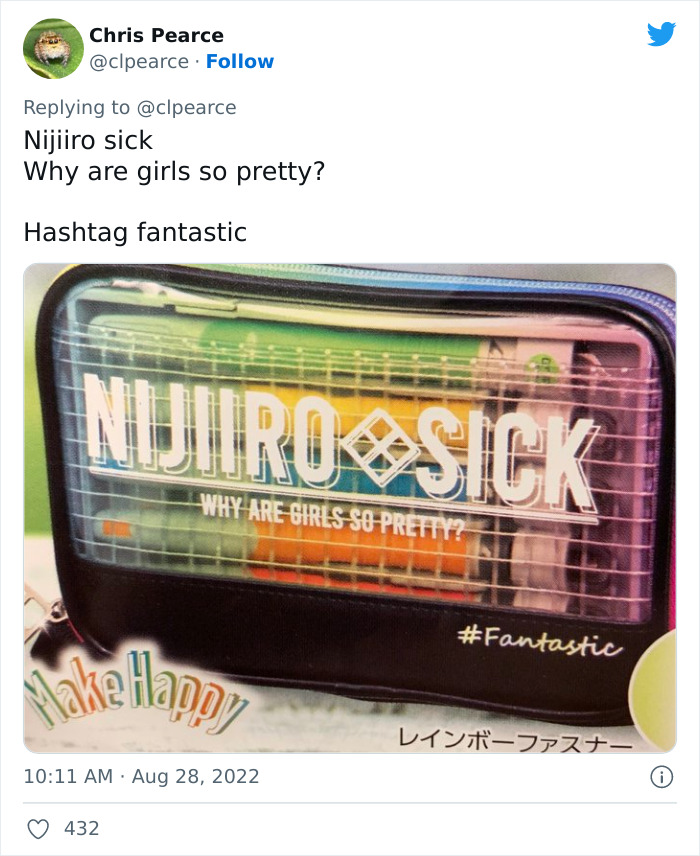 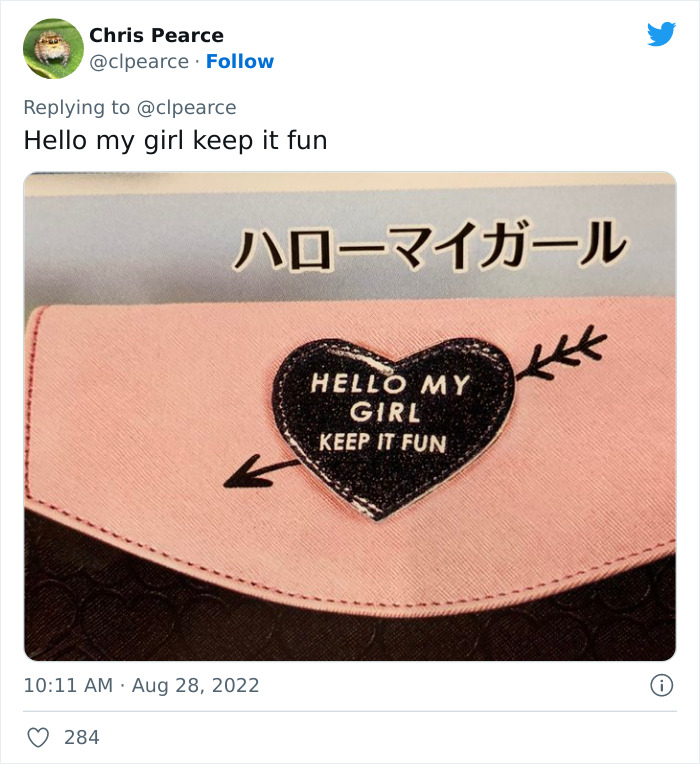 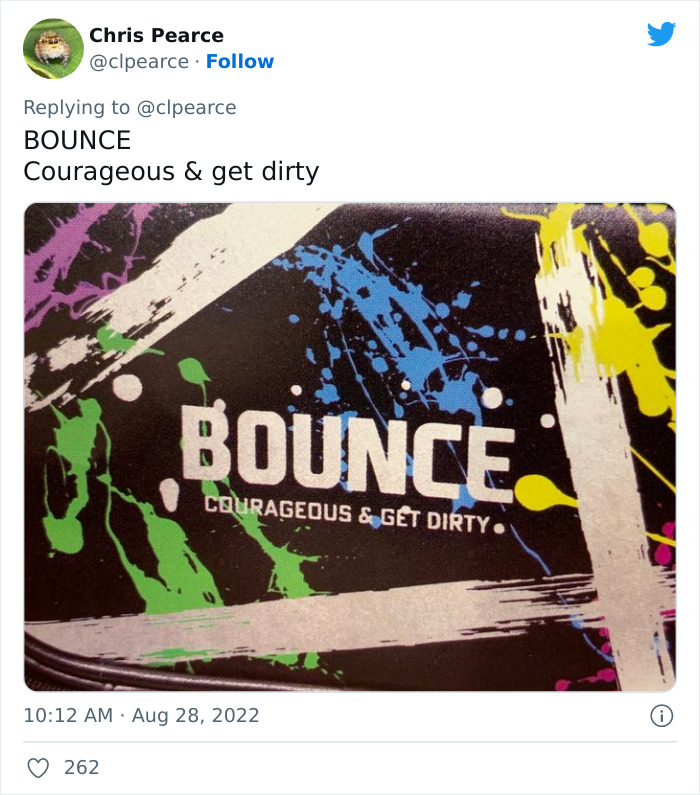 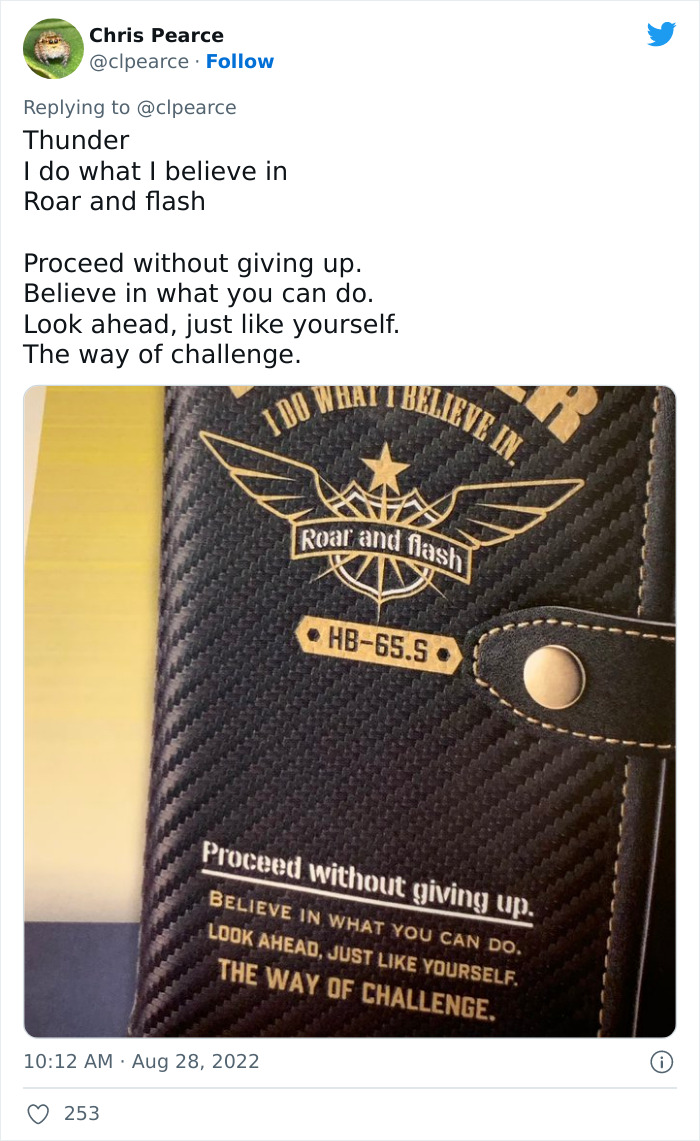 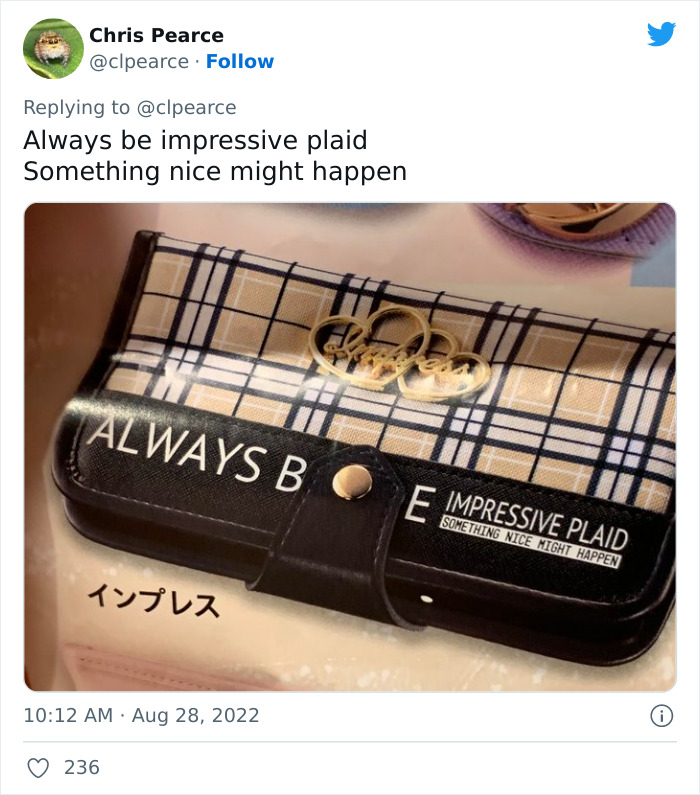 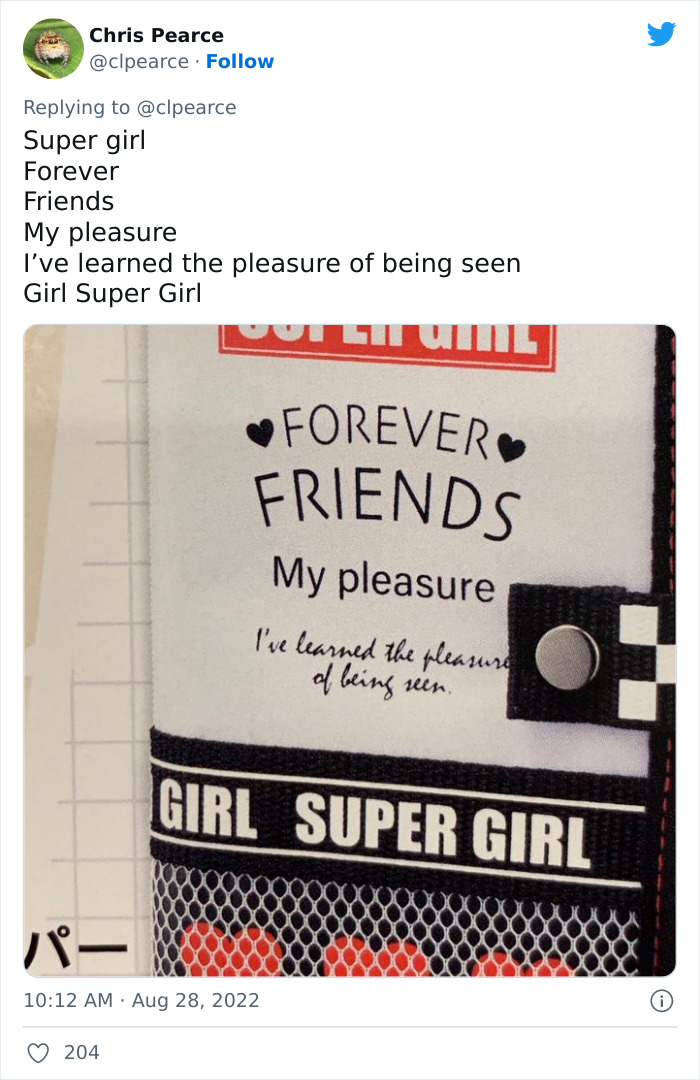 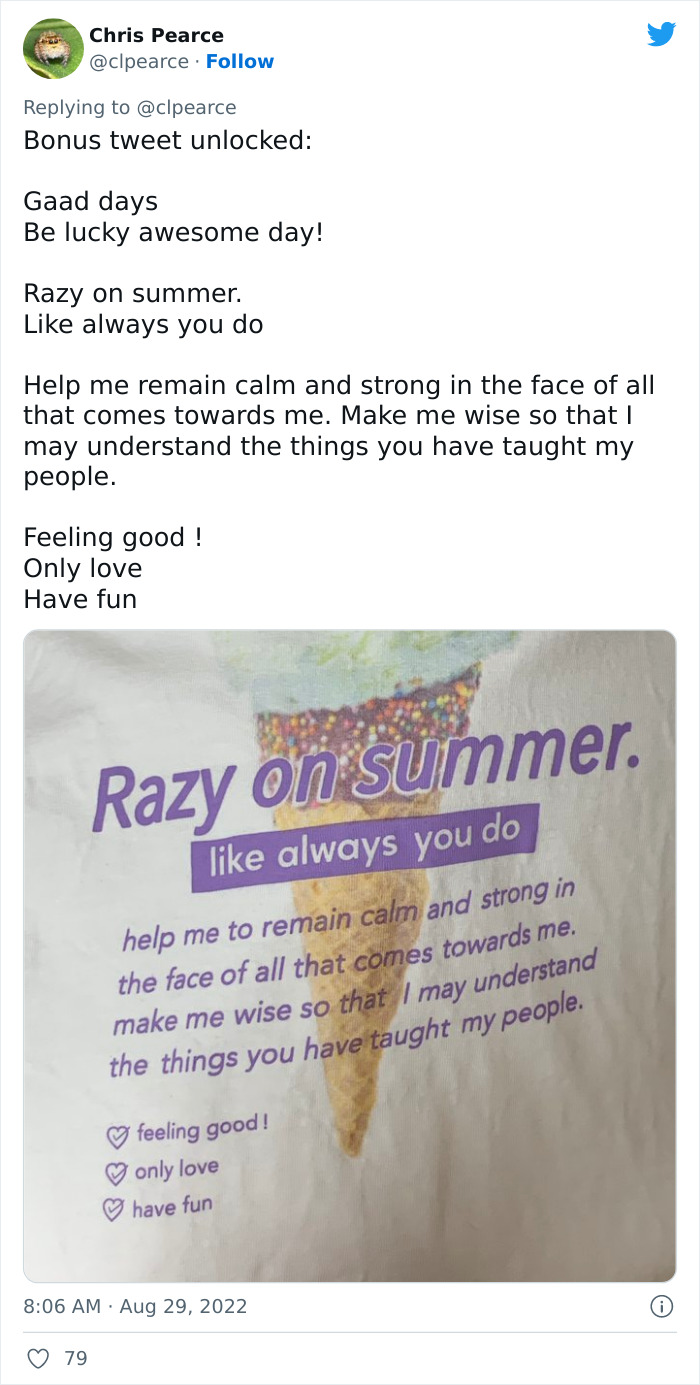 Nobody’s making fun of anyone for struggling with English. We’ve all had our ups and downs learning the language (yours truly remembers how much the class struggled spelling ‘beautiful’ in the second grade).

However, when you actually have the financial means to make and distribute products to customers, the least you could do is make sure that whatever’s written a) makes sense; and b) isn’t riddled with errors. Well, unless you want to sound all deep and mysterious that is! The world’s in sore need of witty content, so there is that, too.

Writer Ariane told Bored Panda that reading “a lot of English books” is the best way to get better at writing. There’s really no way around this if you want to improve! But that’s hardly a punishment: reading is fun and some of us might even have a backlog that’s several dozen books long. Yours truly may or may not be reading eight books at the same time, literally.

“Say anything you like, but make it interesting. I guess these phrases qualify, but in the wrong way!” she said, referring to the viral Twitter thread.

The writer agreed with Bored Panda that the English spelling system is a chaotic mess. ” It is an absolute trainwreck,” she said.

“Just practice, sadly. I can’t imagine having to learn it for the first time and distinguish there, their, and they’re! It must be a nightmare,” she said that someone learning English will simply have to get used to all of the weird spellings. There’s no easy way around the issue, except to go through. Alas!

“In the same way that lots of Brits get tattoos featuring Japanese or Chinese writing, people of other cultures think English writing looks cool,” writer Ariane shared why some people take to writing weird phrases in English on various products.

“In both cases, it doesn’t matter what it says, either because they can’t understand it or because they think it’s some mystical English phrase. It’s absolutely hilarious.”

A while back, Bored Panda spoke to Professor Lisa McLendon, a journalism expert from the University of Kansas, about some of the main challenges that foreign students have when learning English.

“English spelling is such a trainwreck, with its myriad silent letters and wildly varying pronunciations for letters and letter combinations. But also, articles (a/an/the) tend to be difficult for people whose native language doesn’t have them, and our tense/aspect blend with combinations of auxiliary verbs makes the English verb system tricky even for native speakers sometimes,” the professor explained to us.

Spellcheck, unfortunately, isn’t the panacea that many would like it to be. “Where it’s more of a curse than a blessing is with homonyms/homophones because it won’t flag a word that is a word, but not the word you want. Think affect/effect, who’s/whose, led/lead but also word pairs like form/from and not-synonyms like bemuse/amuse, etc.,” she said.

“People have proposed spelling overhauls before but they tend to not go anywhere, probably because it’s such a daunting project—could we all agree on what the changes would be?—and because then an entire body of texts would become basically a foreign language to the next generation. Many factors in addition to spelling contribute to a language’s ‘character,’ but some spellings do have echoes of archaic English—in my opinion, it would be a little bit sad to lose some of that,” the professor shared her thoughts with Bored Panda.

Meanwhile, during another interview, TikToker Steven Wong, aka ALLSTAR STEVEN, shared his thoughts with Bored Panda about Japanese culture. He said that the Japanese are very considerate of each other and think everything through. They value convenience and it can be found in many parts of their daily lives.

Steven advised taking a trip to Japan in spring and early fall to avoid the heat and cold. “If you want to catch the cherry blossom season, go towards the end of March or beginning of April,” he told us.

“Don’t be intimidated, you can get around by downloading Google translate. Getting around is really simple too with Google Maps,” he said that people who don’t know Japanese shouldn’t feel bad and should still consider visiting.

“Download the ‘Suica’ app to pay for trains and buses. If you’re traveling to different regions in Japan, I highly recommend getting a ‘Japan Rail Pass,’ also called the JR Pass, which is a rail pass for overseas visitors,” he said, adding that it’s a good idea to have some cash on you while traveling.

“Most places take credit cards and debit cards but it’s always good to have some local currency on hand (Yen). You can convert your currency into Yen at the currency exchange shops or from ATMs.” He also advised travelers to bring a bin bag with them because there are “rarely any trash cans” in Japan, in his experience.

Here’s how some Twitter users reacted to the hilarious thread 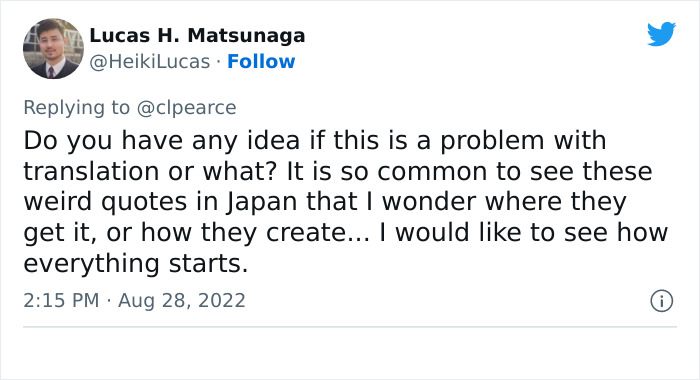 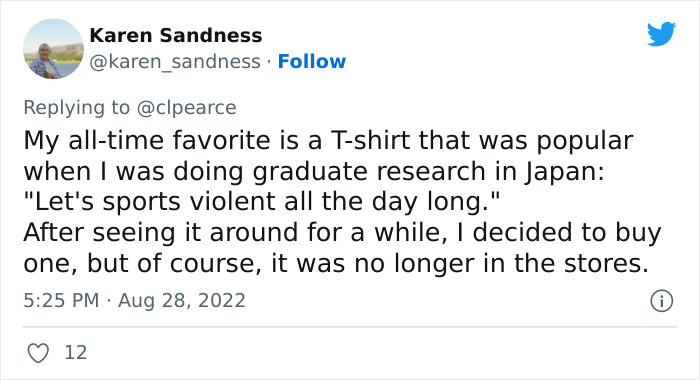 Meanwhile, others shared their examples of wise (aka absurd) phrases plastered on various things 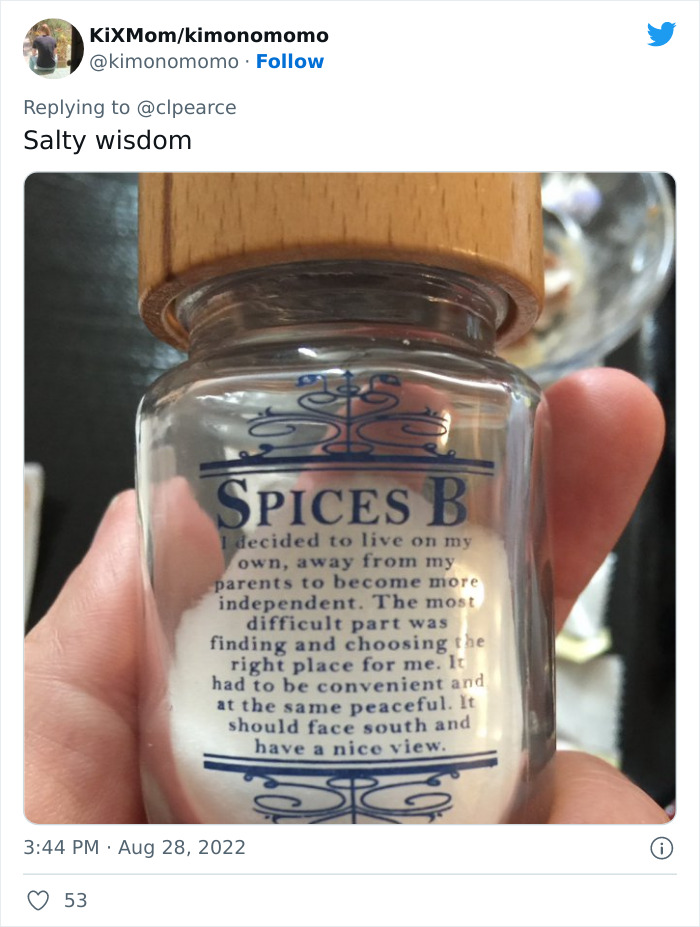 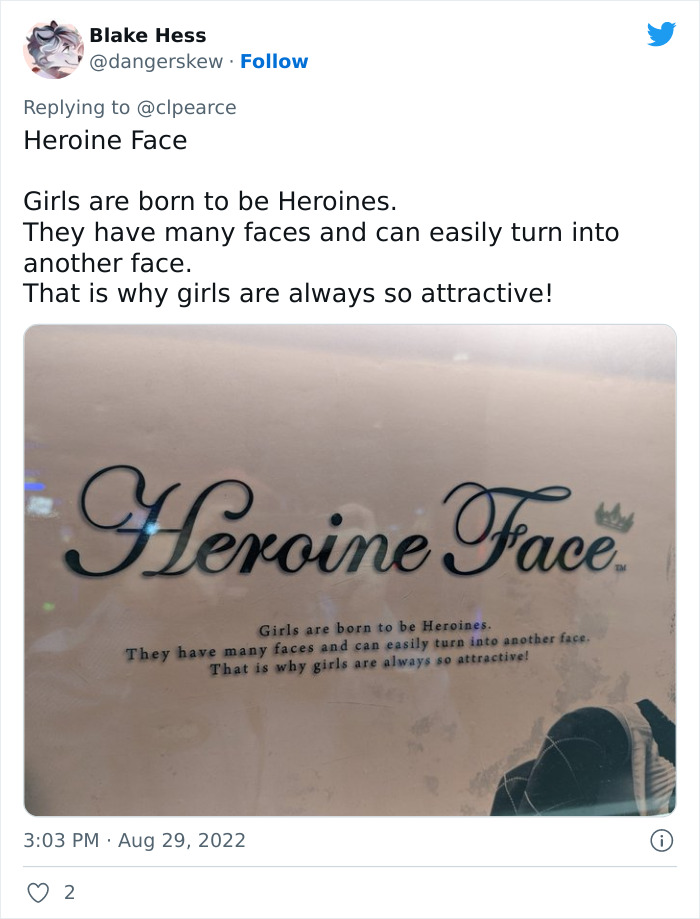 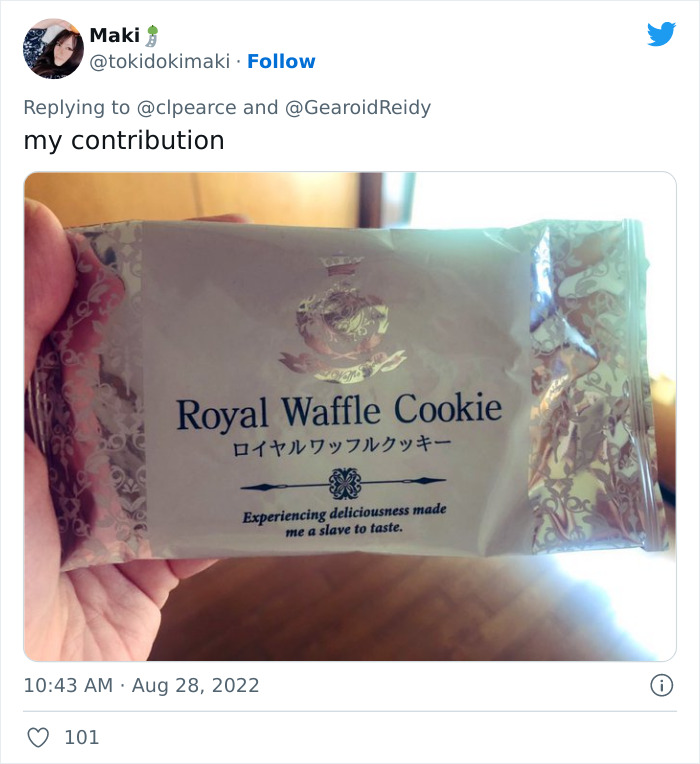 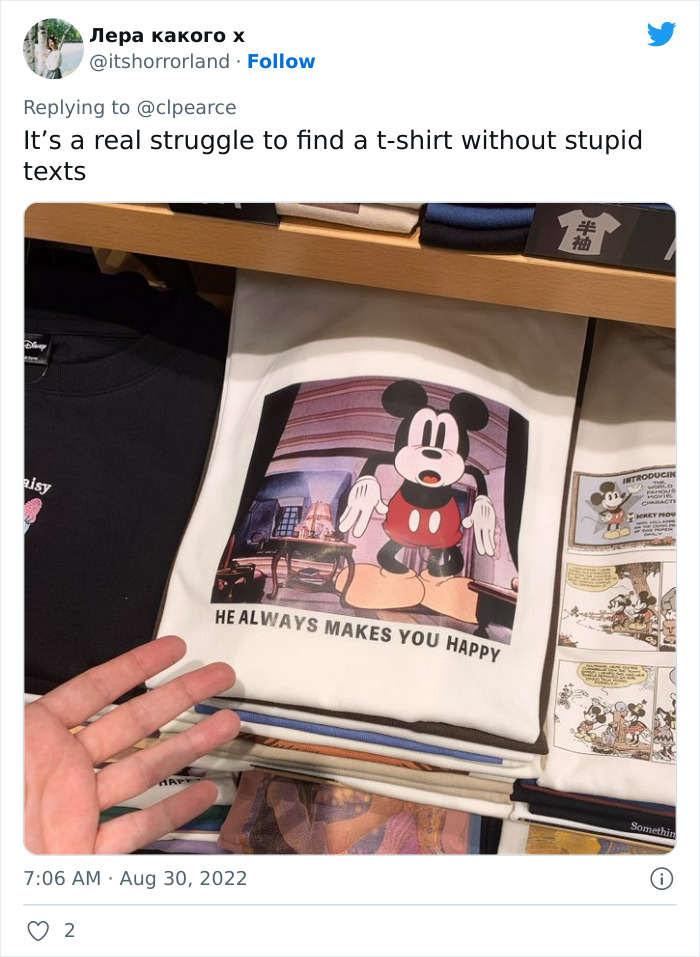 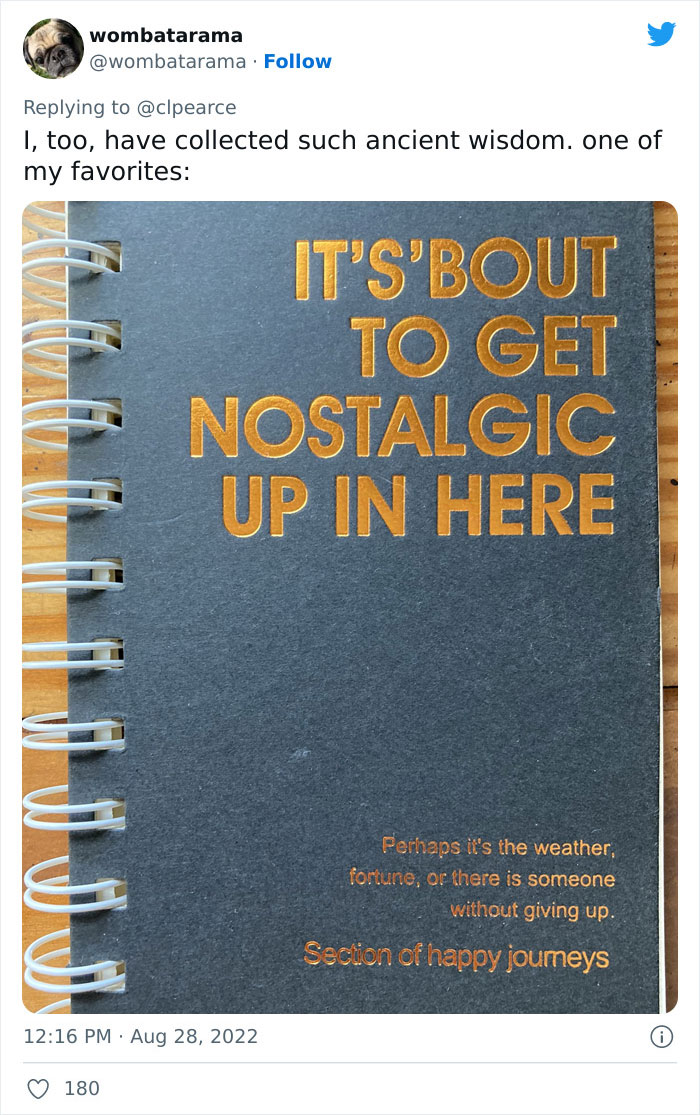 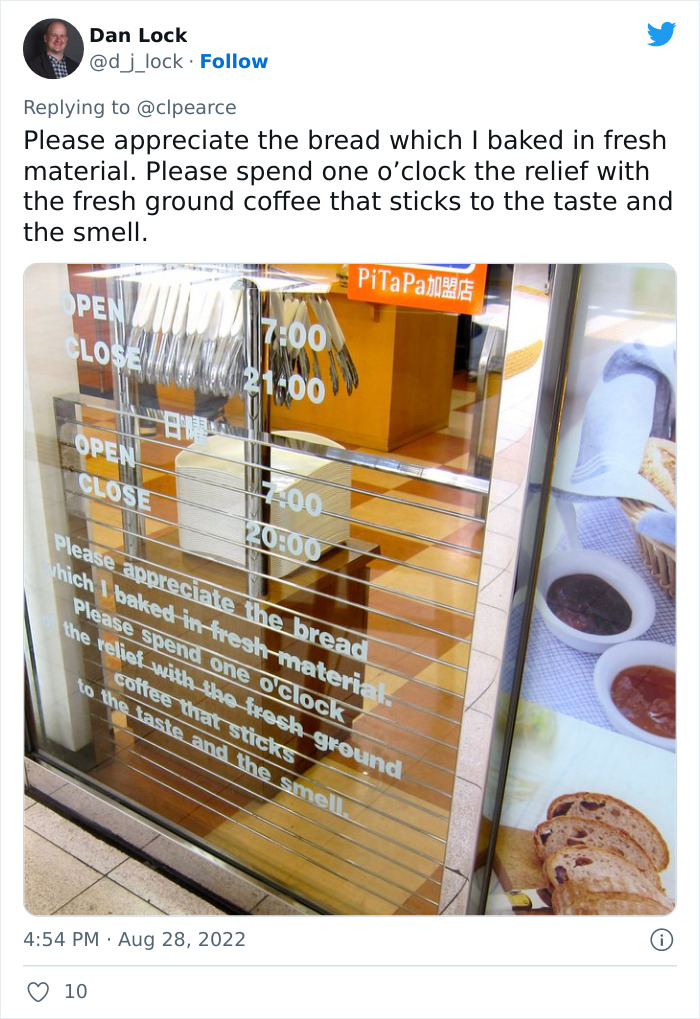 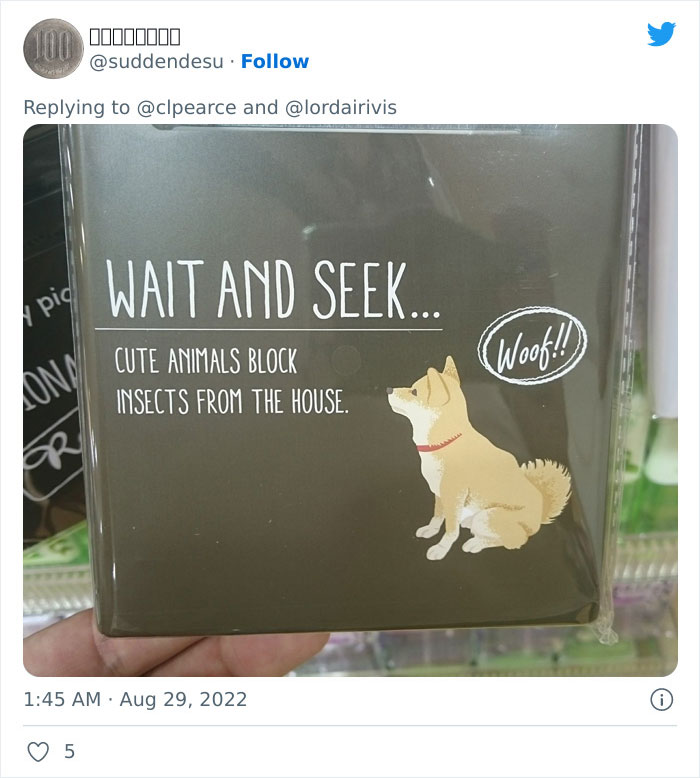