Ralph Waldo Emerson believed that “The purpose of life is not to be happy. It is to be useful, to be honorable, to be compassionate, to have it make some difference that you have lived and lived well.” While that’s all nice and dandy, one can argue that this can quickly lead to a whole bunch of sad.

We all want our lives to be meaningful, righteous, purposeful. Where does having a little fun sit in all of it? If we were more like felines and had a few more lives than just the one we’re given, things might seem different. But if the right thing to do is always right, then why does it feel so good to be bad? Especially if it’s not really harming anyone?

The sweetest little old ladies have been having this conundrum. They’ve lived their lives helping others, raising their children, being valuable members of society, ignoring the little urge to misbehave and break the law, to be a little naughty. But now, police officers have been granting these wannabe criminals their wish of getting arrested, and this is just the story we’ll be diving into!

Jean Bickerton recently celebrated her 100th birthday, but her wish was an unusual one. She blew out the candles and 3 officers appeared to arrest her 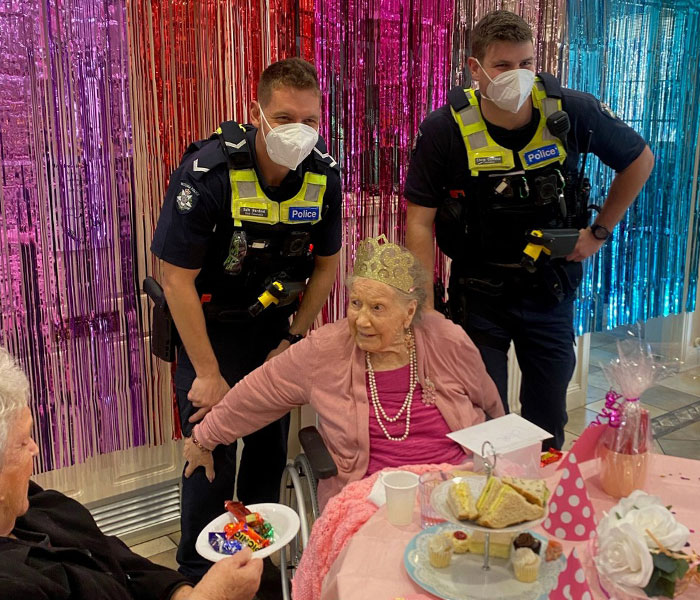 I’d like to believe (or at least, reassure myself) that we all have a tiny devil on our shoulder telling us to do something, to think something, to imagine something that we know we’re not supposed to.

Like stealing the overpriced chocolates and running for the hills. Like wanting the screeching child to fall on their face. Like starting an anarchist movement as the heating prices are set to rise by 90%. Yet the consequences of such potential actions and thoughts could lead to a little more than a slap on the wrist.

So we refrain. I mean really, who wants to have human suffering on their hands forever? Those chocolates could’ve made someone’s day a lot better… And such diminishment of our innermost devious desires continues day after day, month after month, year after year.

The law-abiding citizen and retired nurse, who cared for soldiers during World War II, had one wish on her bucket list and that was to get arrested 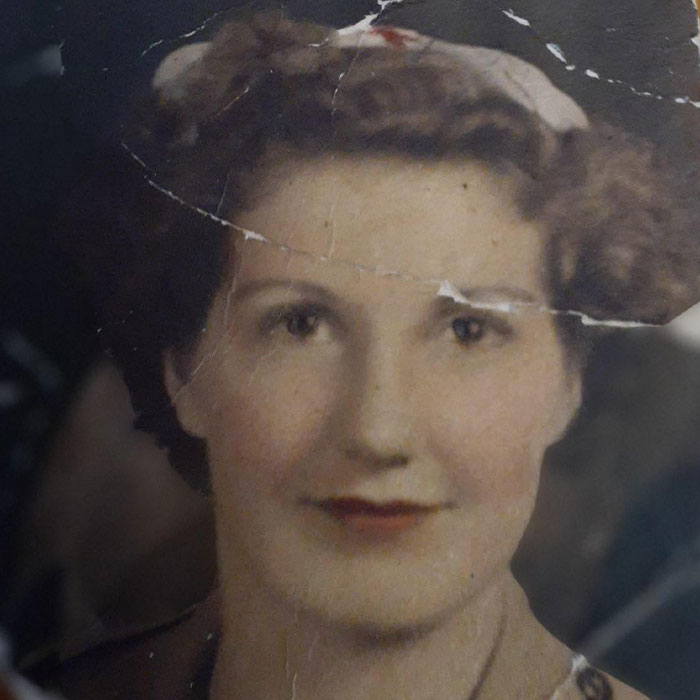 Jean Bickerton reached a milestone not many are fortunate enough to reach. She recently celebrated her 100th birthday. A hundred years of doing nothing but benefiting her community, her children and grandchildren.

She served in the Australian Army Medical Women’s Service (AAMWS) from 1944 to 1946. Jean joined the AAMWS during the Second World War, in late January 1944. One memorable experience that Jean recalled to Matt Keogh was being one of the nurses in late 1945 to take the first returned prisoners of war from Changi to the beach by bus for some R&R. 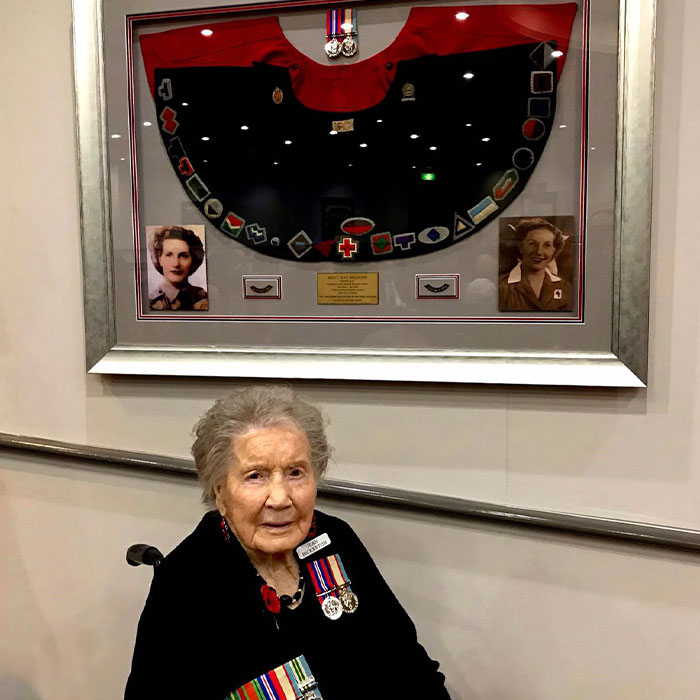 During the war in April 1945, Jean married Russell Leonard Bickerton and they went on to raise 2 daughters. Russell had enlisted in the Army in December 1941 and served with the 2/27th Australian Infantry Battalion, before being discharged in January 1946. Sadly, Russell passed away in 2002.

By all societal norms and expectations, the former nurse has lived a life of purpose, compassion and honor. But that wasn’t enough, she wanted to experience something that most avoid.

“Now these kinda arrests, we’re happy to make!” said the Victoria Police Department, sending in 3 officers to her birthday party 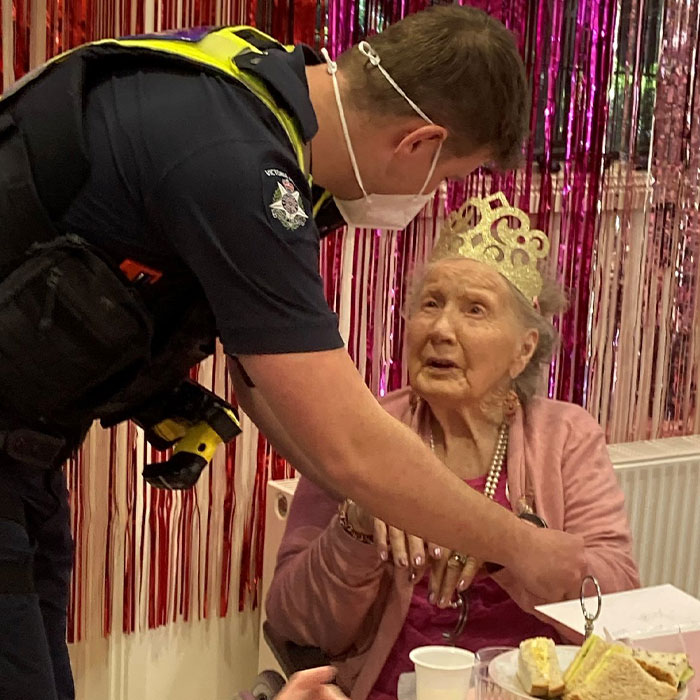 Hearing of such a wish, Victoria Police decided to follow through, saying in a Facebook post: “Now these kinda arrests, we’re happy to make!” Although the officers believe that getting through life without getting arrested is a pretty admirable feat, this situation may be the one exception. “When we heard of Jean’s wishes, our team at Moe station were ready to step in and help check it off,” they wrote.

“I’ve never had handcuffs on before, I enjoyed it,” she said. Jean said that it was the best celebration she’d ever had and thanked the cops for brightening her day 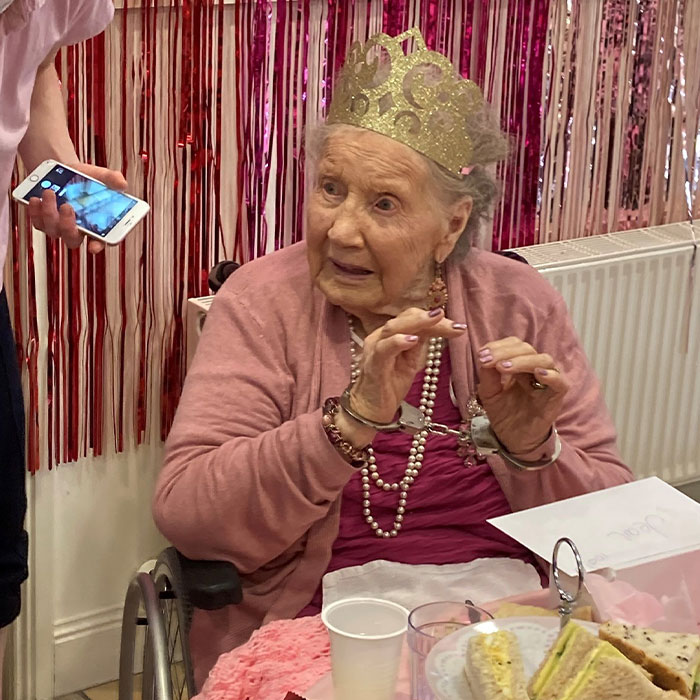 Jean was in the middle of her birthday party at Narracan Gardens Residential Aged Care when “three young constables whirled in, lights and sirens, to make sure Jean’s birthday wishes were granted.” Of course, the officers briefed the residents of the event beforehand, assuring them that no one was actually in trouble.

The officers arrived before the birthday girl and gently placed handcuffs on Jean, declaring that she was “officially” under arrest. According to the officers, she did not resist. “I’ve never had handcuffs on before, I enjoyed it,” she told Sunrise. She recalled, “I was surprised they were quite soft. They were too big for me anyway.”

Her daughter Kathy told Sunrise that her mom has always had a strange sense of humor. “All throughout lockdown, she kept saying she’d been in jail and, yet she’s never been arrested,” she explained. But now, Jean could “officially” flaunt the fact that she had been taken in by three attractive officers. She rejoiced that it was one of the best celebrations she’d ever had and thanked the cops for brightening her day.

The secret to a long life, according to Jean, is a healthy diet without sugar or sweets, no alcohol and no smoking 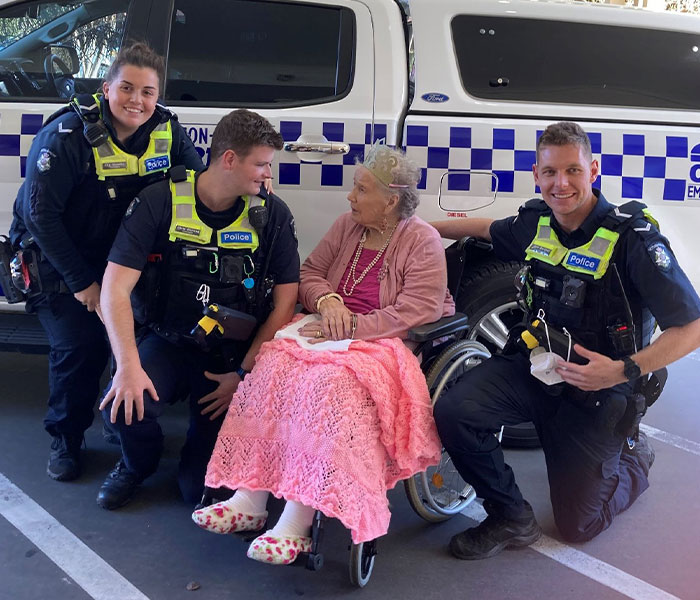 The Victoria Police Department was glad that they could help make such an occasion more memorable. Even more happy were the people who came across this story. 15K absolutely loved this act of playful wish-fulfillment. One user wrote, “What a beautiful story, congratulations Jean on your 100th birthday, and thank you Vic. Police for making her day, one she will always remember.” Another said: “Love this! You’re never too old to have fun. Great job on Victoria Police for helping her have a great day.”

Jean believes that the secret to a long and happy life is to have a healthy diet and avoid all cakes and sugar. She doesn’t drink, nor smoke. I suppose I won’t be joining Jean in the 100-year-old club then; I myself love the thrill of living in the moment, and that includes all the looked-down-upon gloriously unhealthy food.

With a roll of dice, another year falls. Whatever’s ahead is untold. With a glimpse of the future, the wisdom of the past, take the new year with bounds of pleasure, try to make it last. Roll the dice, let it fall, decide your fate, and march on. No looking back, there’s nothing to see. Only ahead is where you’ll find the sea.

We wish Jean a very happy birthday and many wonderful years of life! She will go down in history as one of the only people to have thanked cops for arresting her 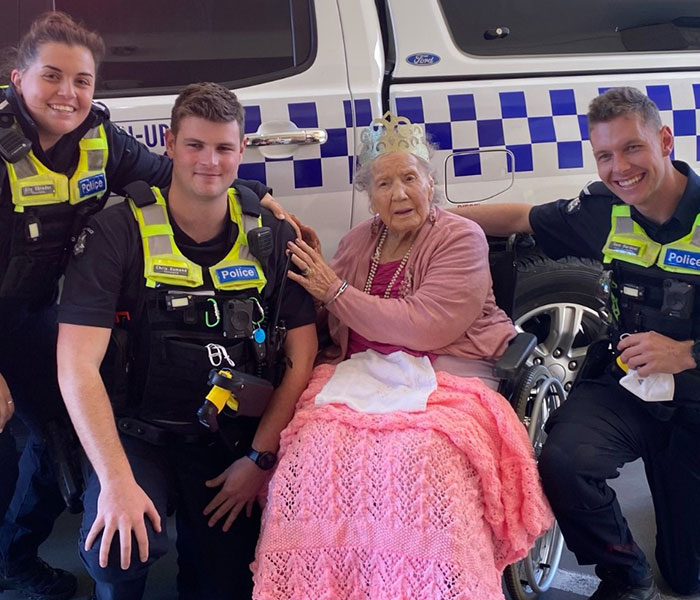 Whether it’s a life of purpose or a life of entertainment that you’re looking for, as long as you keep a sense of humor and don’t hurt anyone in the process (including yourself), we wish you success in finding what makes you happy! If getting arrested is on your list, give your local police office a call!

We wish Jean a very happy year of life and hope there are plenty more to come! Let us know your wildest dreams and bucket list items, as well as your thoughts on the story in the comments below! Remember to Upvote and Follow the author for more chaotic yet wholesome stories, and I hope all those who do have a lovely day!

People have absolutely loved this story, applauding her sense of humor and youthful spirit. Let us know your bucket list items and thoughts in the comments! 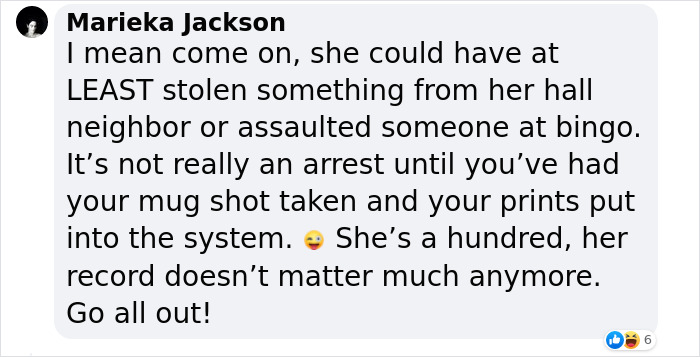 The post Law-Abiding Woman Has Wish Of Being Arrested Come True On Her 100th Birthday, And The Internet Is In Stitches first appeared on Bored Panda.