Christmas is a festive period for bonding with friends and family, and leaving the stress of modern life behind. However, as one confession on the British parenting forum Mumsnet shows, sometimes it’s the get-together that’s causing tension.

In it, user HallieM93 explains that her main concern nowadays is her 20-month-old son’s sleeping troubles. The woman wants to protect her toddler’s routine from the chaos that sometimes comes with the joyous occasion.

However, that means changing the family’s plans and leaving her in-laws early, a move that, she believes, would disappoint both her relatives and partner.

This woman wants her family to have a nice Christmas, but she’s afraid that her toddler won’t be able to relax and get some rest 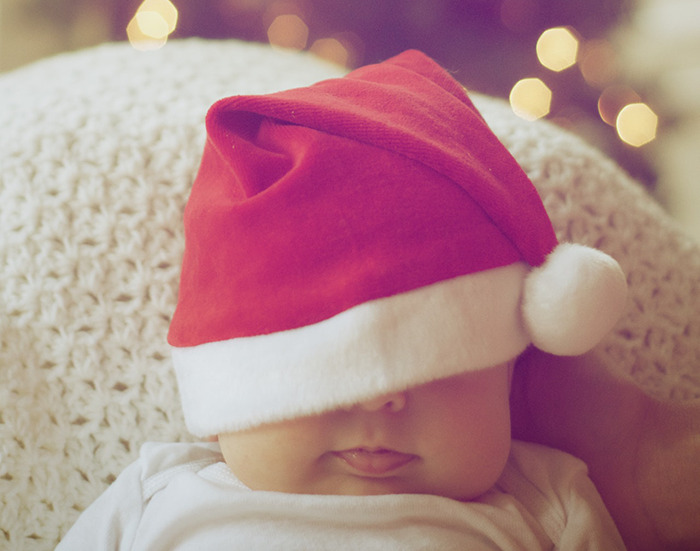 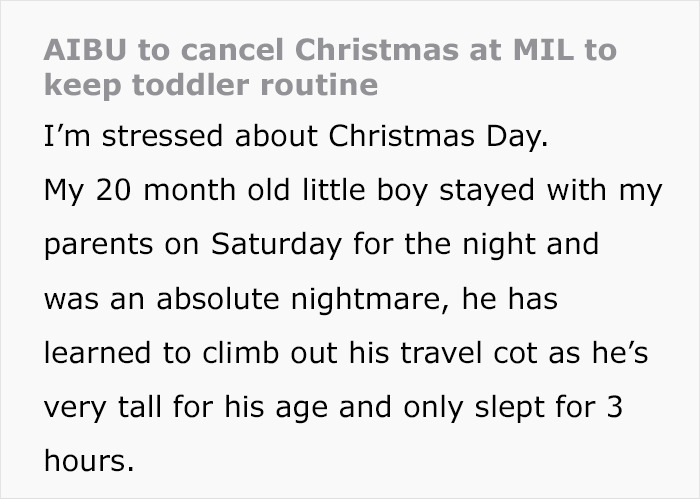 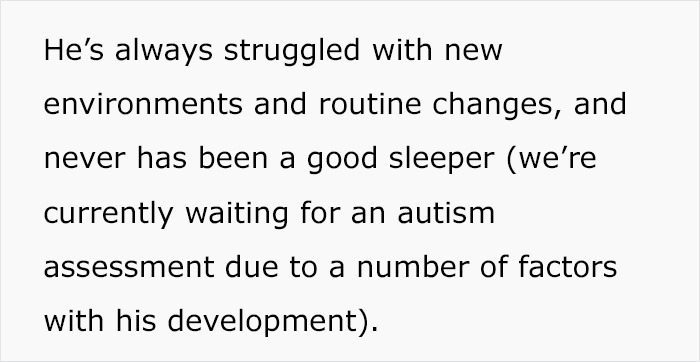 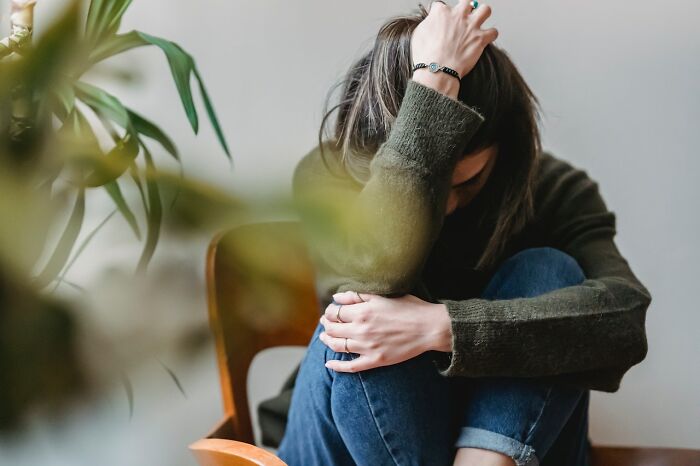 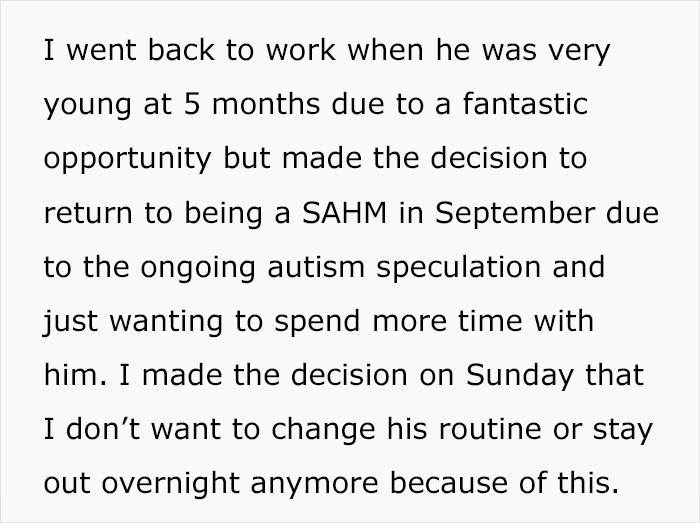 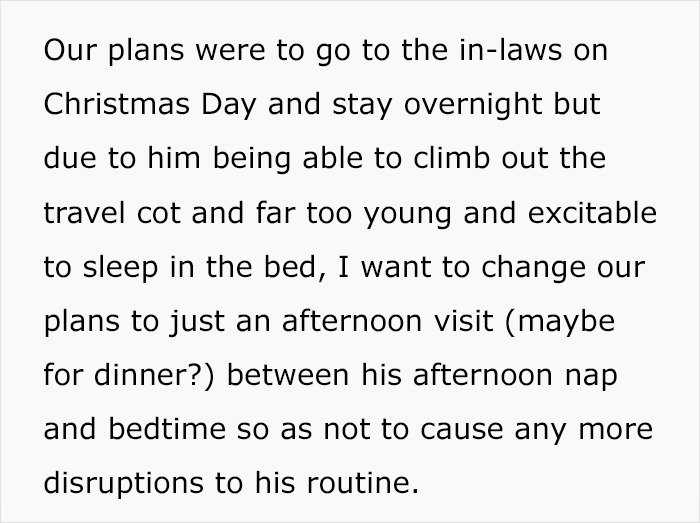 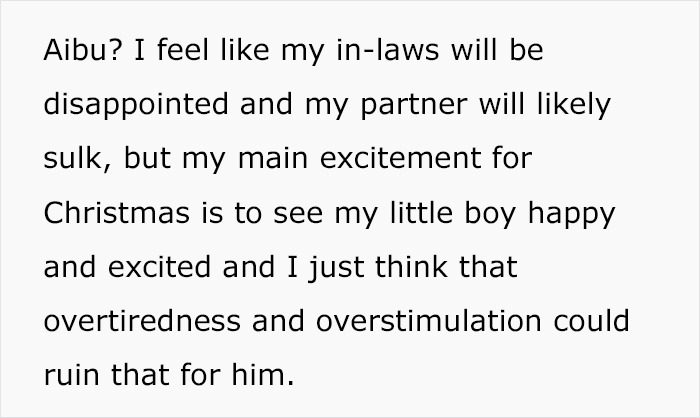 The mom’s worries are understandable. Toddlers should be getting 11 to 14 hours of sleep a day. It’s how the little ones grow! Typically, they collect all those z’s through a combo of two one- to two-hour naps during the day (or one longer afternoon nap as they near age 2) and a solid 10 to 11 1/2 hours at night. Many toddlers drop from two naps to one between 12 and 18 months, but some do not until they’re 2.

Most tots sleep best when they’re tucked into bed by 7:30 or 8 p.m. at the latest. Turning in on the early side ensures that they have the opportunity to log the number of sleep hours she needs to feel well-rested (especially since many parents can expect a wake-up call between 6 and 7 am). Although, young kids who go to bed before 9 p.m. tend to fall asleep faster and wake up less often during the night.

Not all toddlers experience a sleep regression (struggles with their positive habits) similar to that of OP’s son, but many do. Toddler sleep regression generally occurs between 18 months and 2 years of age, although the exact timing can be different for each child. The good thing is that most of these cases last for only a few weeks at a time, and it’s likely that pretty soon the little one will start sleeping through the night again.

The most common causes of these problems include going through big life changes, such as potty training or a new sibling, fears and night terrors, and separation anxiety.

Experts say that a set bedtime routine is one of the best ways to help toddlers sleep better; doing the same things in the same order every night helps teaches them what to expect and calm down. So if this woman believes that at this point, such measures are needed, is she really being unreasonable? Tell us what you think in the comments below.

The mom elaborated on her concerns as her post gained traction 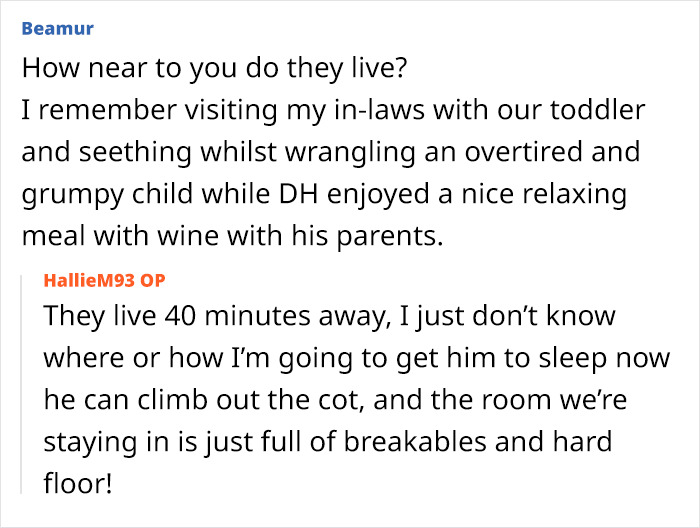 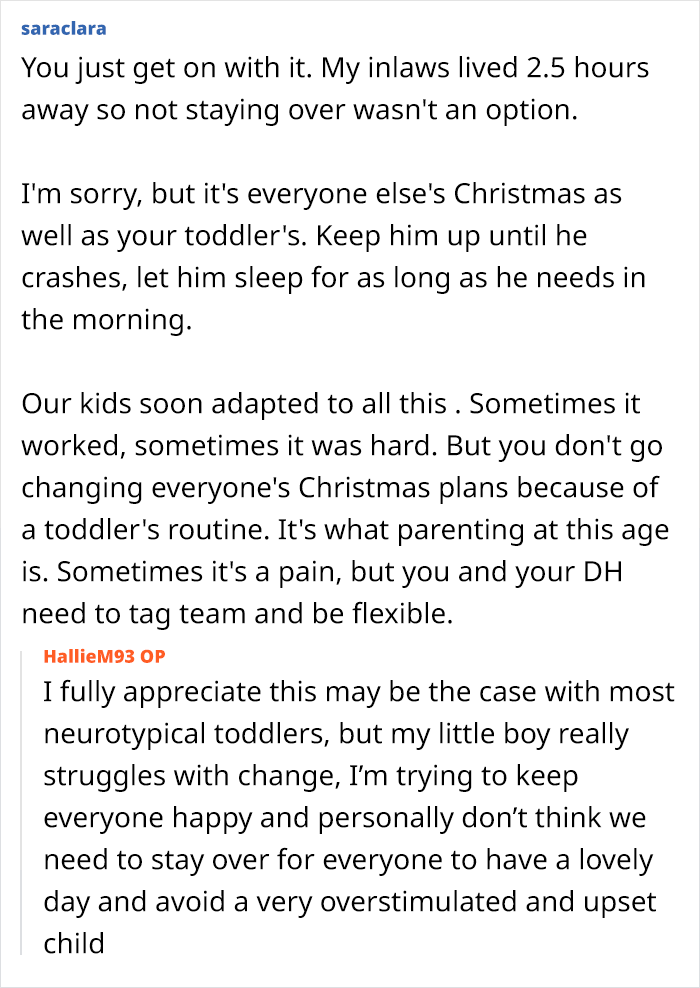 And the reactions were mixed; some said she is actually being unreasonable 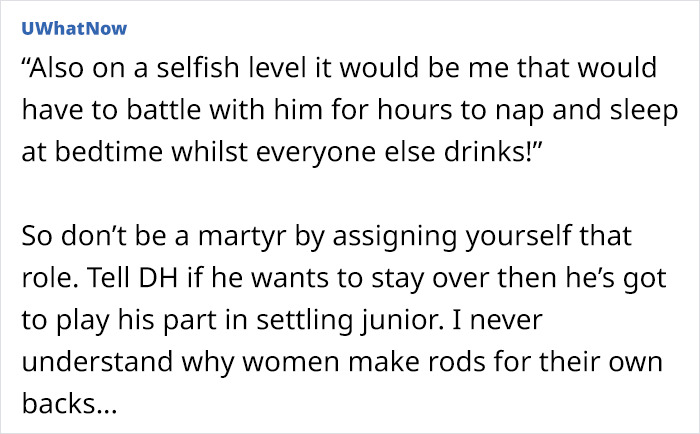 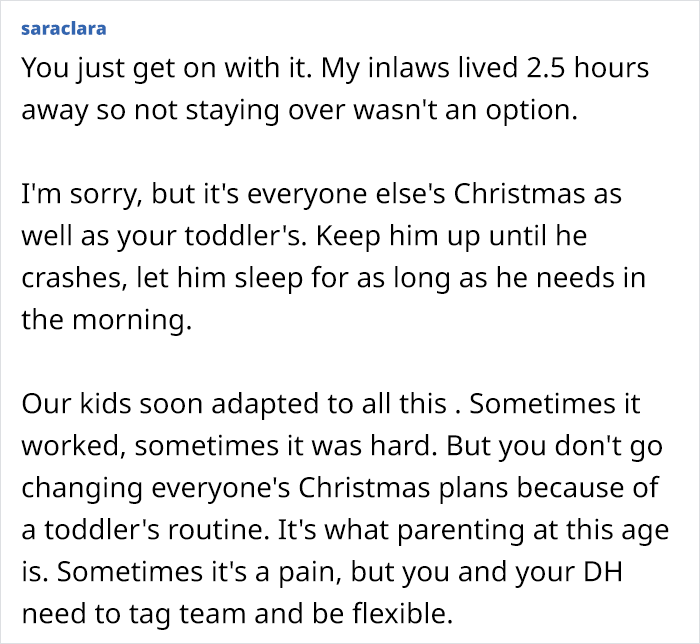 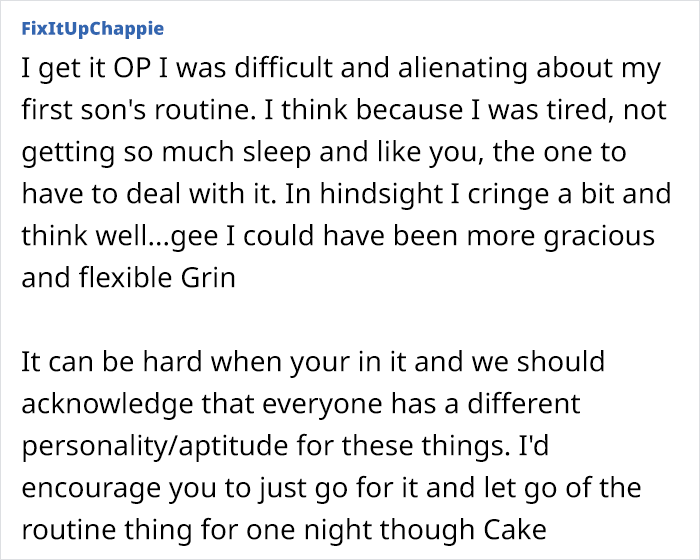 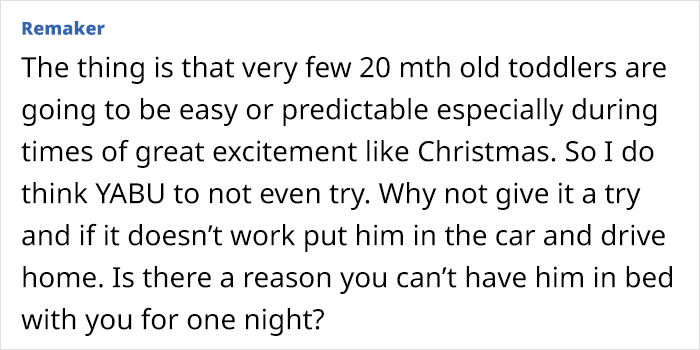 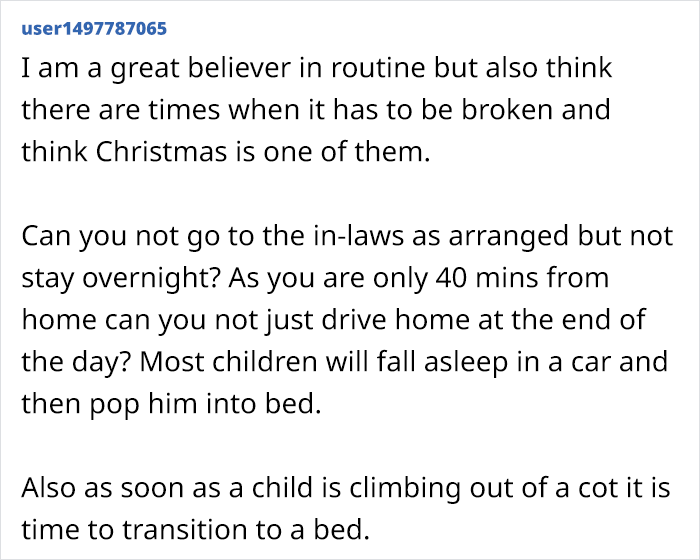 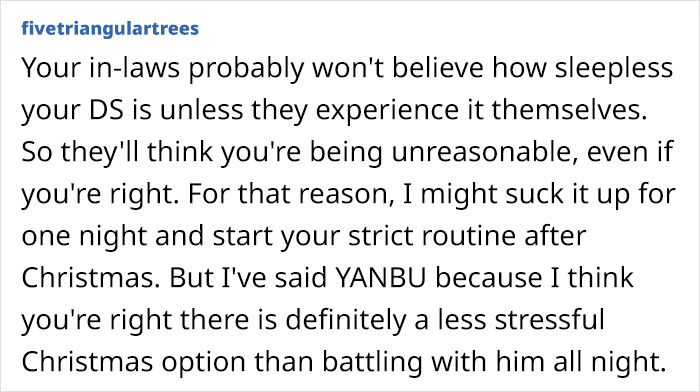 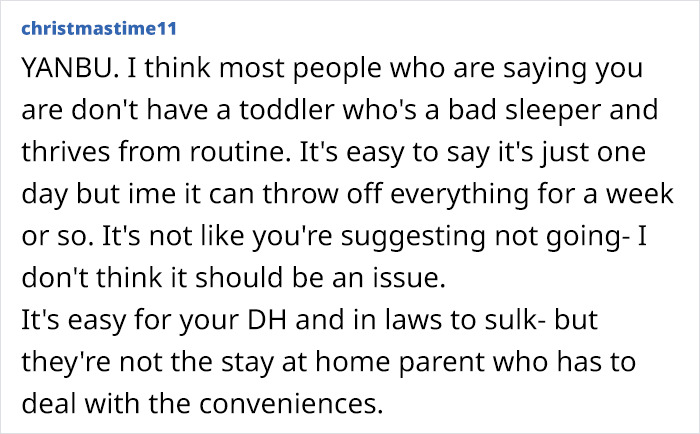 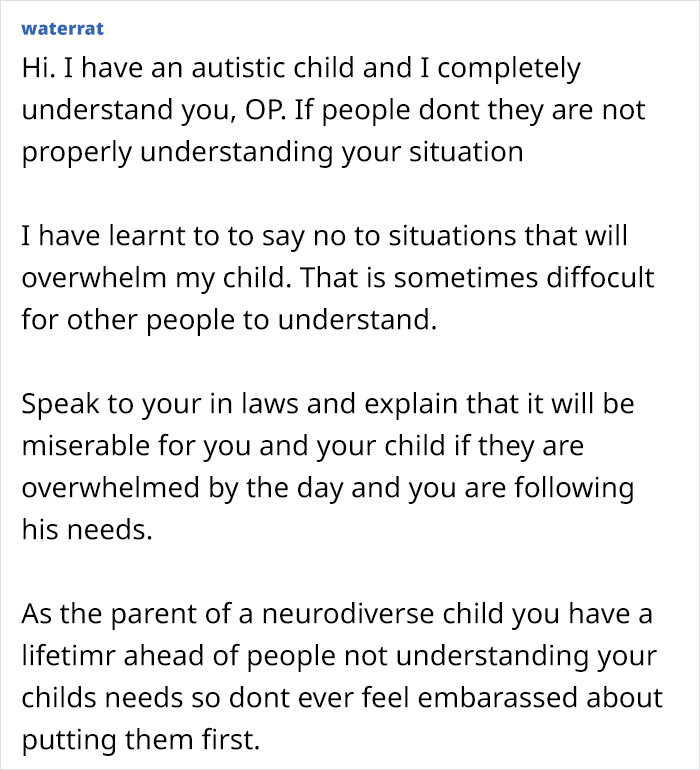 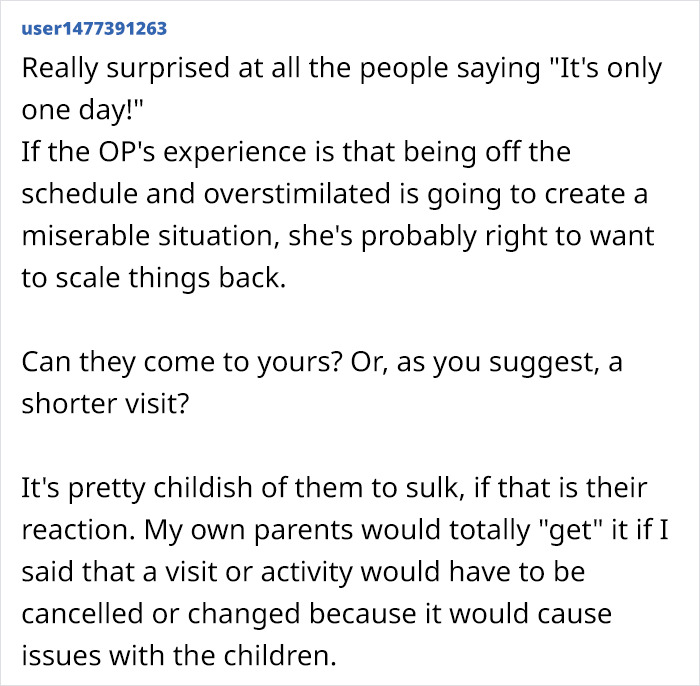 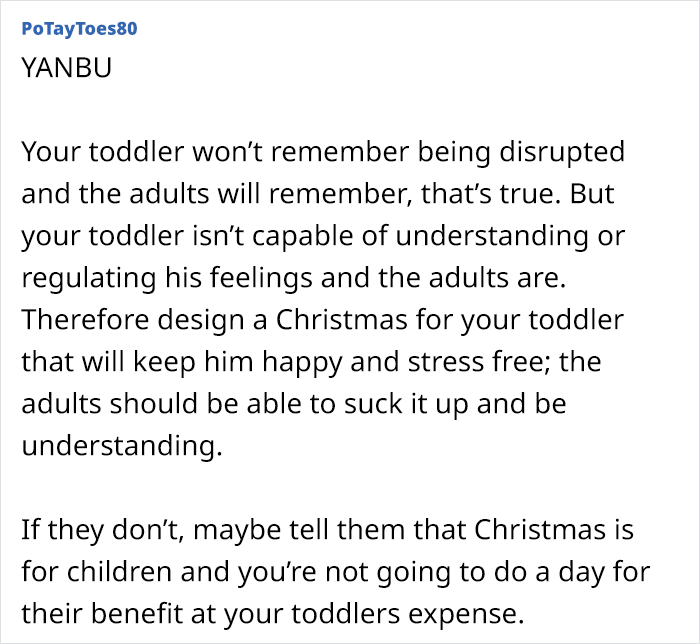 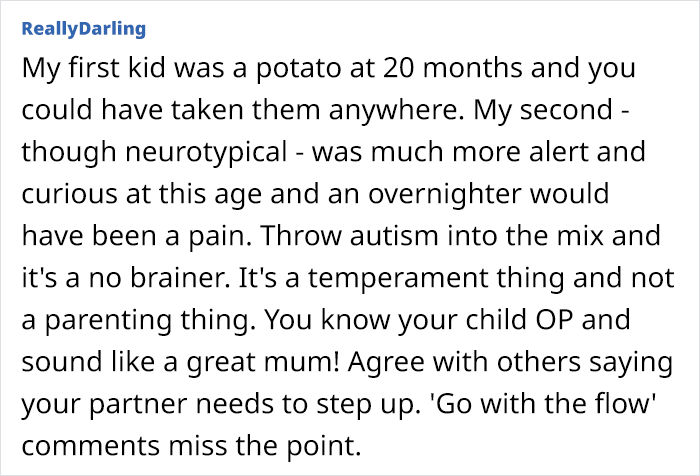 The post Mom Asks If She’s Being Unreasonable For Thinking About ‘Canceling Christmas’ At Her In-Laws, So As To Not Disrupt Son’s Daily Routine first appeared on Bored Panda.