Moving out of your parents’ home is one of the most common signs of becoming an adult. And while it’s more of a social norm than law, most people move out because they start school in another location, or they have a job that pays well, proving them with financial stability that leads to independence. But staying with your parents is cool too, for more or less the same reasons, and there is no shame in it.

But then there are more unique situations. One such situation recently found its way onto Reddit where an 18-year-old son was specifically asked to move out once he’s old enough, but then the parents had a change of heart, but were too late, and for some reason the son’s at fault?

Moving out is part of becoming an adult, but what do you do if your parents suddenly start asking you to move back in with them after asking you to leave? 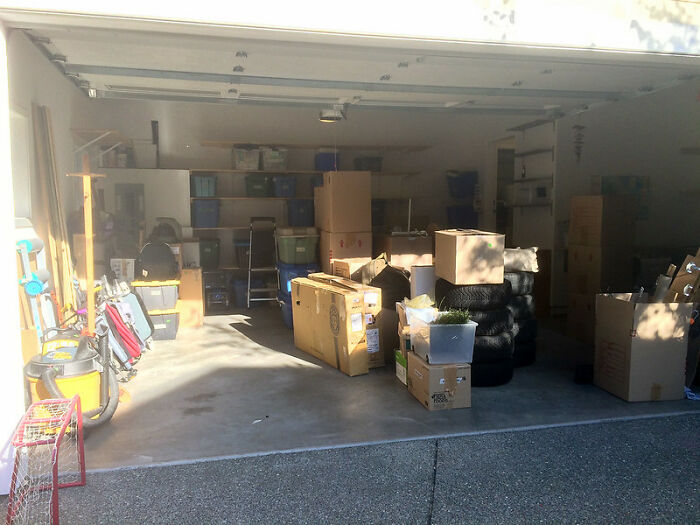 OK, so let’s rewind. Reddit user u/Independent-Boot-789 went to the Am I The A-Hole community to get some perspective on a quite unorthodox predicament involving him moving out.

In particular, the 18-year-old’s parents always wanted to be child-free, but ended up with a son, whom they kept because of religious reasons. While they have always supported him financially, they were emotionally distant and had agreed with the son at a younger age that he was to prepare to leave them once he hit 18.

Well, one Redditor had quite a unique situation regarding moving out, which he shared with the AITA community

So, fast forward to about a week before the fateful birthday, they all sit down, have a chat, during which they make sure the son isn’t leaving the nest unprepared, and the day after his birthday, he departs.

Now, instead of moving in with friends and sharing an apartment, like he originally had planned, he was offered a much better deal in a friend’s family’s furnished basement for $150, which includes utilities. He took the latter. It is important to mention that both he and the family that offered him a place to stay are all of Indian descent. 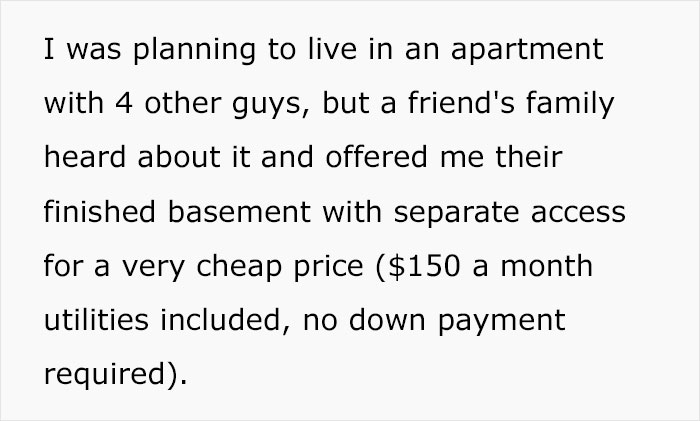 OP had no contact with his parents for a while, until one day he was asked to come over for dinner. This was when the parents offered him the opportunity to move back in, rent-free and all. But he didn’t want to. You see, when he was living with them, he always felt this awkwardness at home, but now that he’s independent, he doesn’t feel that way, and he actually feels great.

So, he declined the offer, which immediately upset both of the parents. So much, in fact, that mom started crying and dad started scolding him, saying friends are distancing themselves from the family because there’s apparently a rumor that they had kicked their own son out and another Indian family took him in. 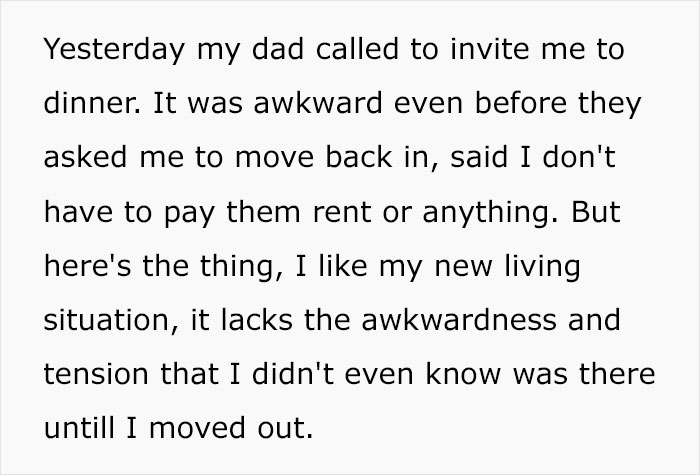 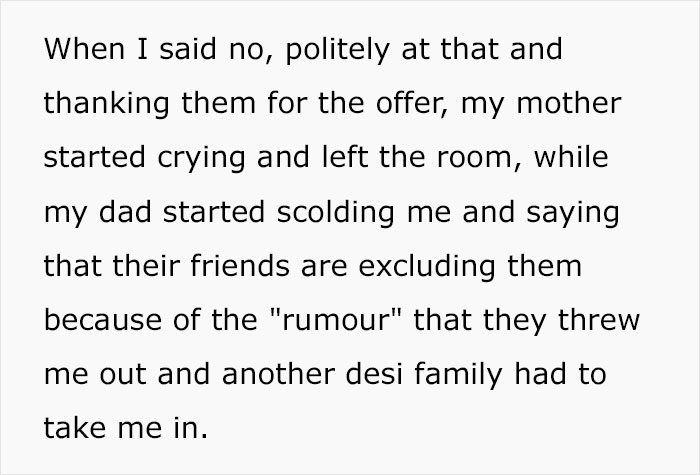 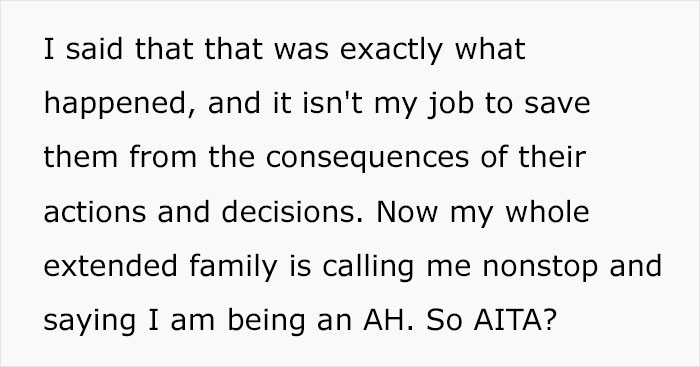 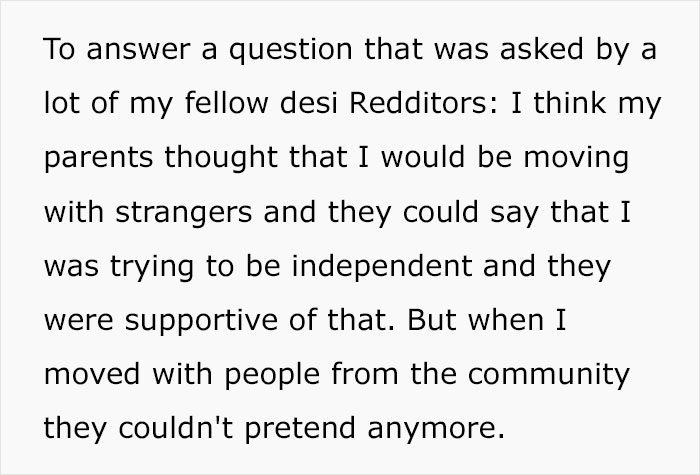 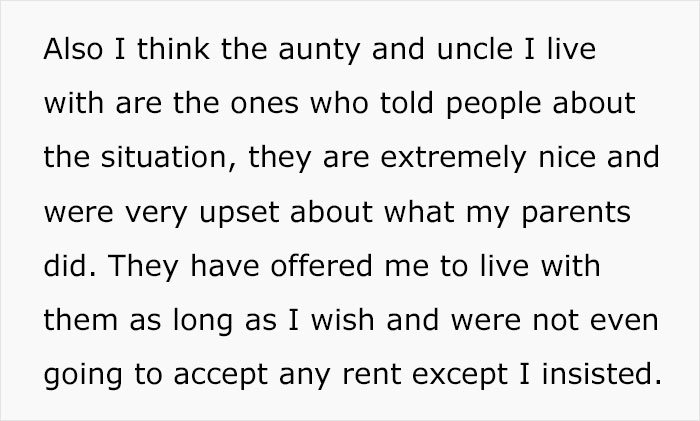 The only thing he had to say is that it was exactly that, it wasn’t his concern to do damage control for something the parents decided to do, and they ought to face the consequences. And now the whole family is effectively terrorizing the 18-year-old for this.

The AITA community didn’t even have to think, they immediately knew who the a-holes were in this situation and ruled OP isn’t one.

The general consensus was that OP’s family is very wrong here, wanting to create a good image of themselves rather than actually caring for their son, let alone being willing to deal with the consequences of their own actions. It should have been something they ought to have at least considered at that point.

In the end, people ruled that OP’s family are the bad guys here, showering OP with support 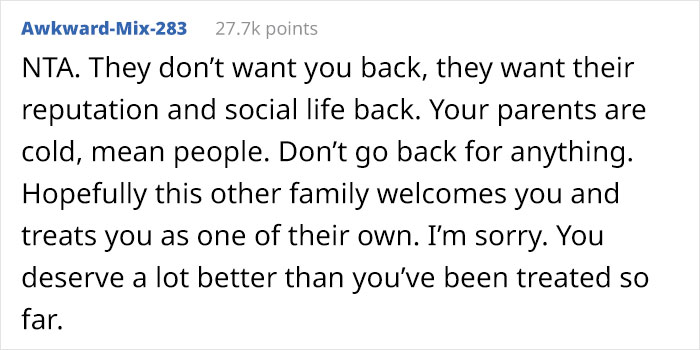 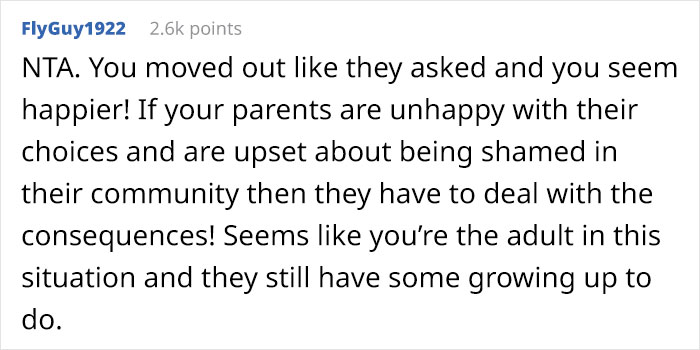 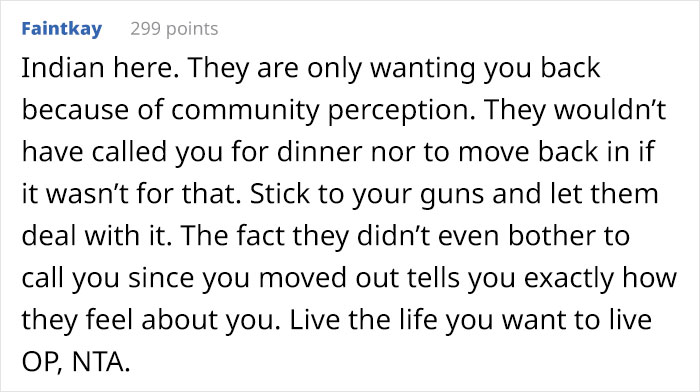 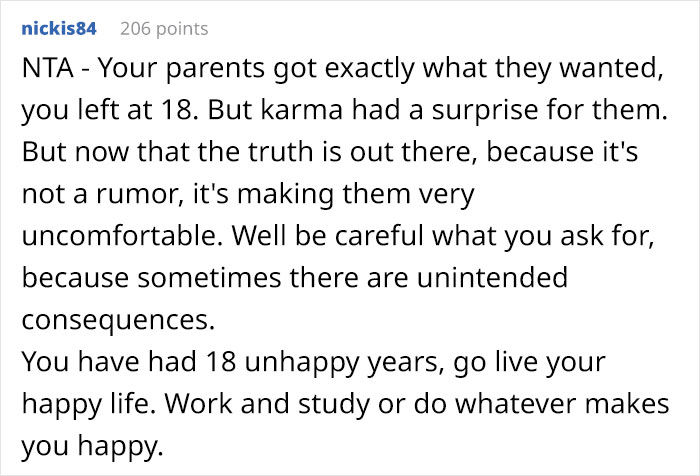 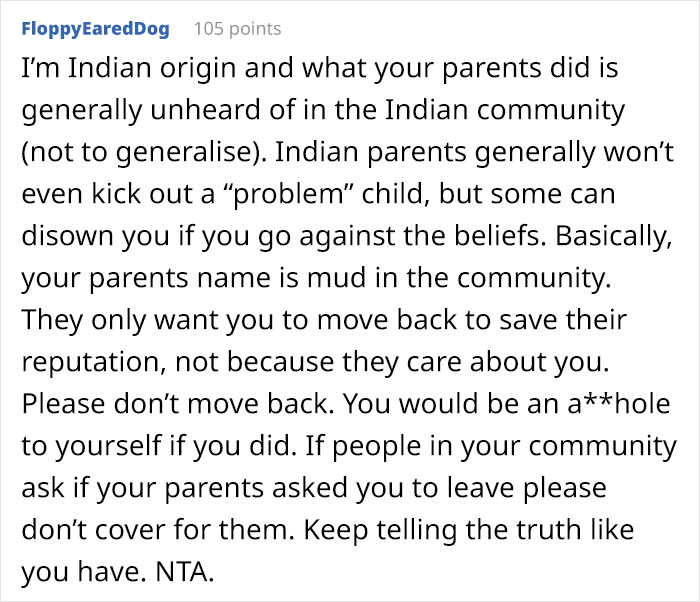 Others even pointed out that moving back in won’t resolve the issue in any way, mostly because of them not caring, but also because the damage is done. All in all, the community was supportive, and OP even added an edit thanking them for it.

You can look through the post in context here, but don’t run off just yet as we’d like to hear your ideas and opinions in the comment section below!

The post “My Mother Started Crying And Left The Room”: Family Upset 18-Year-Old Son Doesn’t Want To Return Home After Parents Kick Him Out first appeared on Bored Panda.