How many times in your life have you actually read the fine print? “Yes, I agree to the terms and conditions.” (I haven’t read three words of them, but I’m sure they’re fine with me!) You can’t blame yourself for wanting to skim, or completely skip over documents, though. If we really dedicated time to reading them all, it would take nearly 250 hours to properly digest all of the digital contracts we sign. Nobody has time for that!

However, some contracts in life are extremely important to read thoroughly, especially if you encounter them at work. One employer learned that lesson the hard way, after refusing to read his IT contractor’s contract and costing himself his job. Below, you can find the full story that was recently shared on the Malicious Compliance subreddit, as well as some of the responses invested readers have left on the post and an interview with McLean Robbins, Vice President of Marketing at MBO Partners.

Let us know in the comments how you feel about the situation, and then if you’re interested in reading another Bored Panda article featuring a boss who needed to learn that sometimes their workers know best, check out this story next!

After his boss decided to ignore his contract, one worker maliciously complied to on-call demands and racked up a startling amount of paid hours 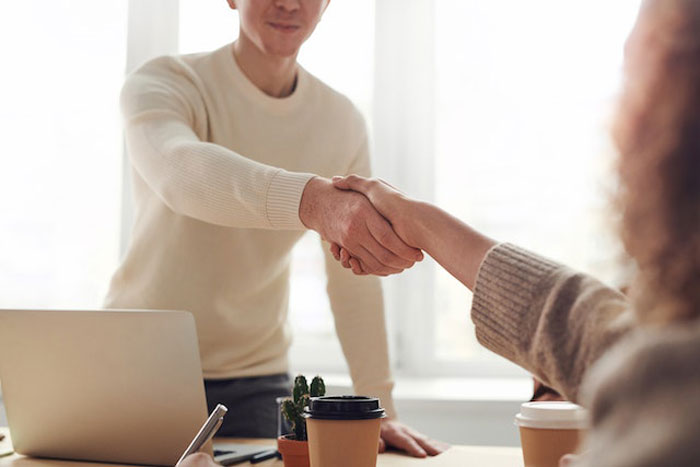 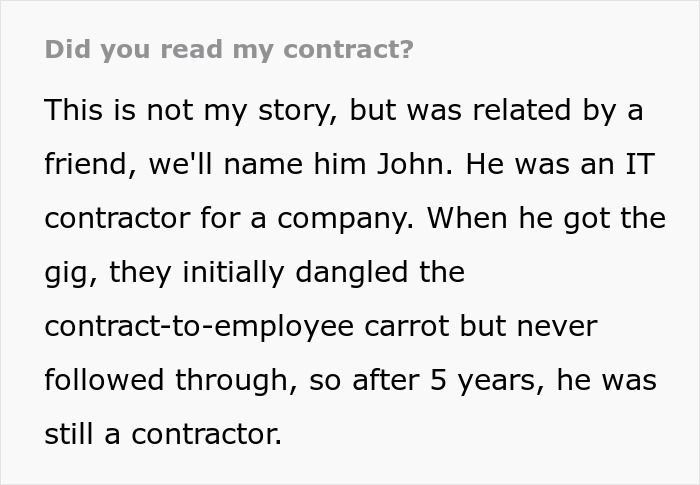 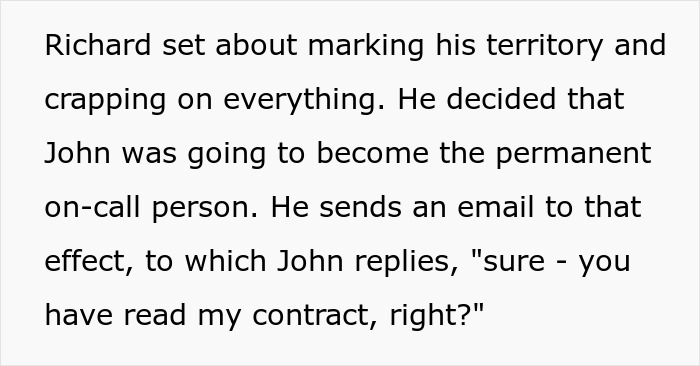 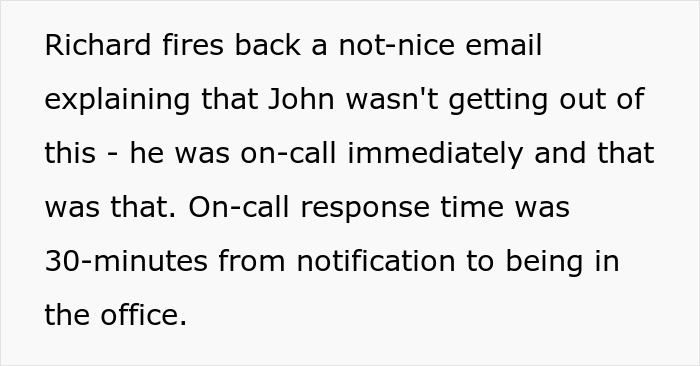 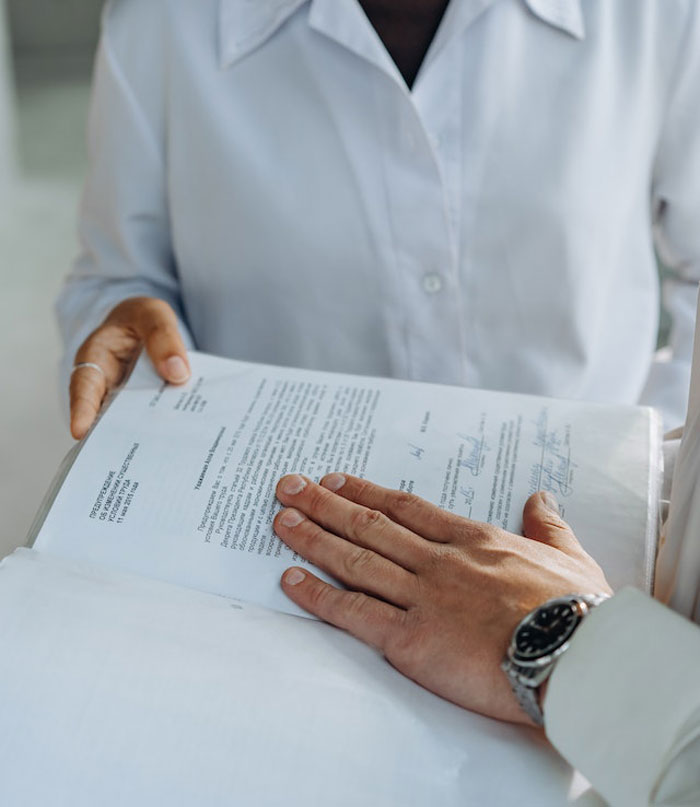 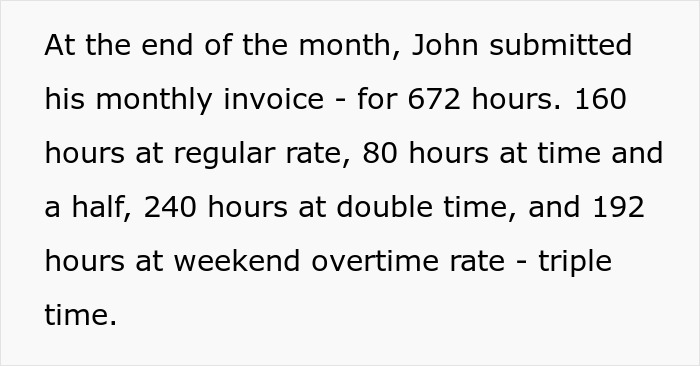 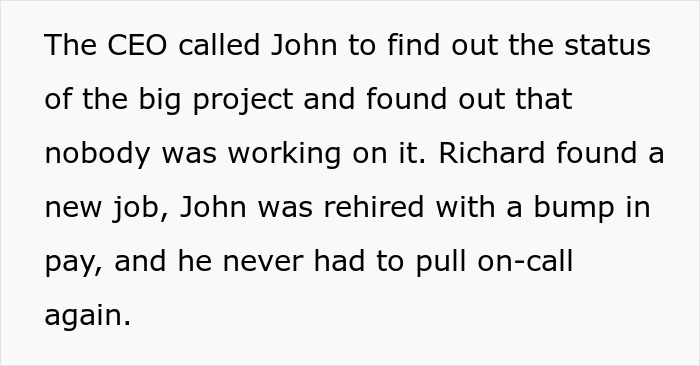 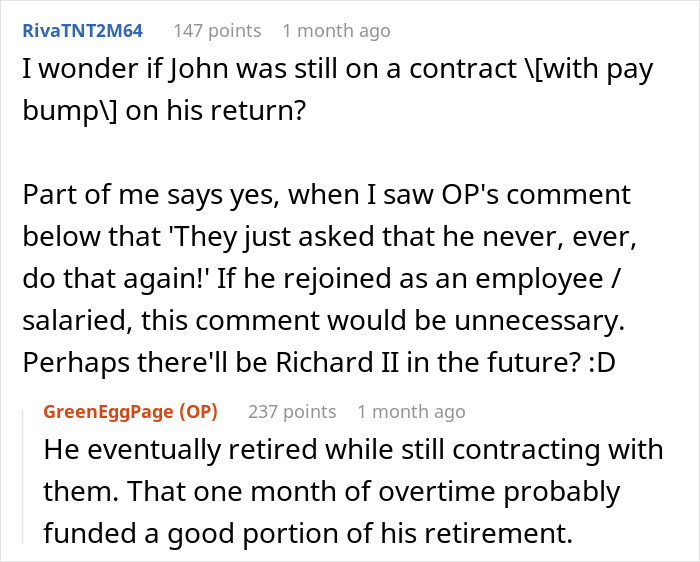 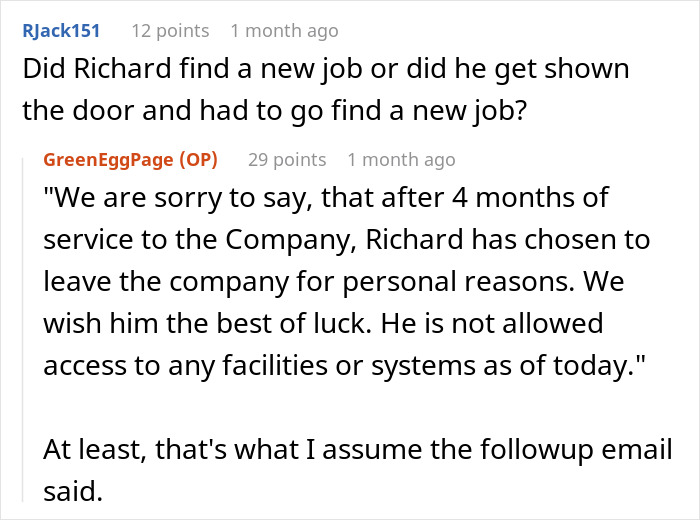 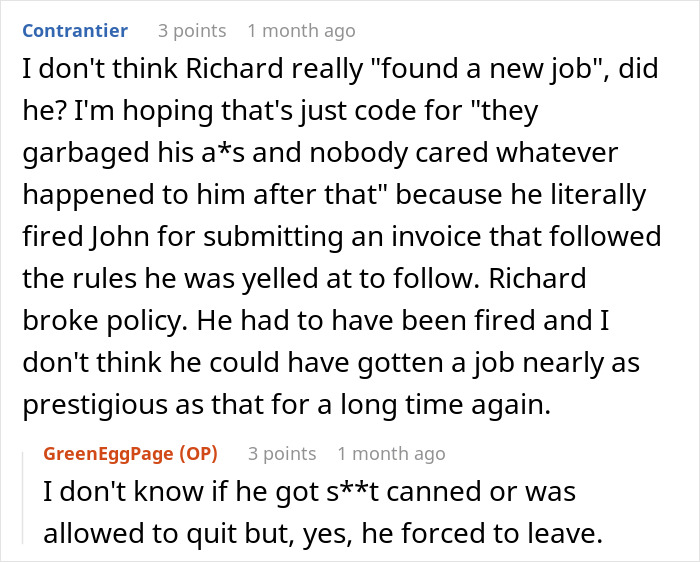 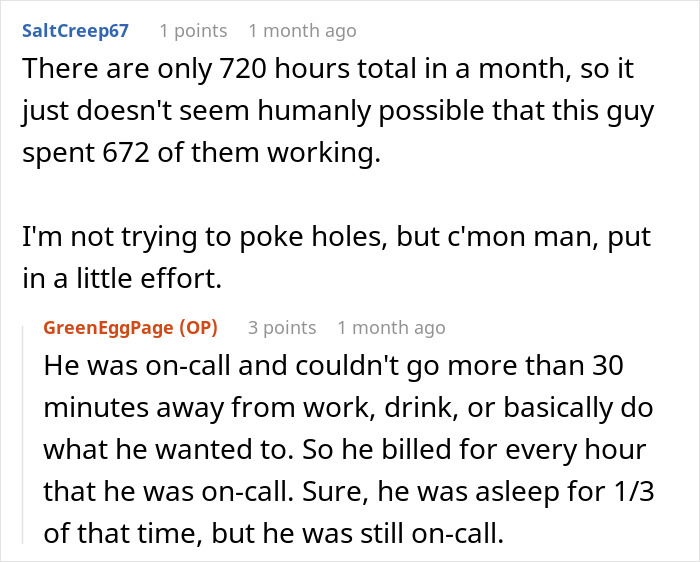 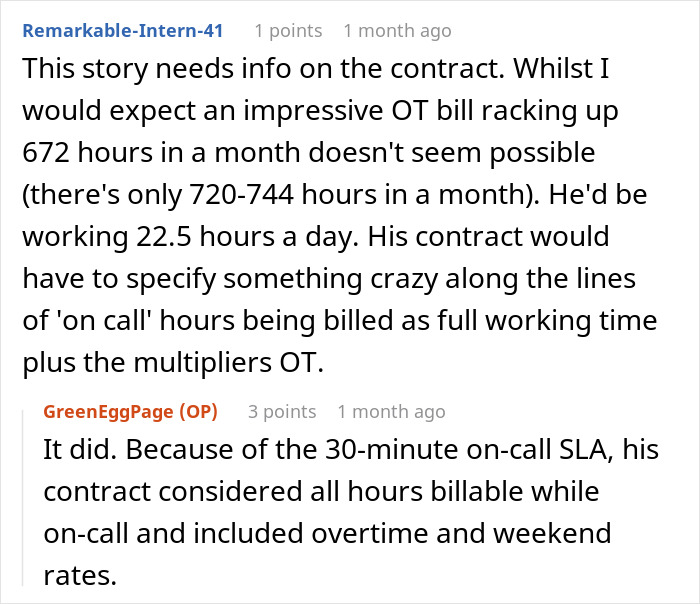 Nobody enjoys reading contracts, but sometimes, it’s just part of your job. Especially when a person is hired to be in charge of others, they better understand what exactly each staff member does and what kinds of contracts they are on. In this particular situation, John gave Robert the opportunity to check his contract and tried to prevent this situation before it happened. But because Robert allowed his ego to run the show, he ended up costing himself his job. I hope this was a lesson learned for him and that he’ll always know the difference between an employee and a contractor from here on out.

To gain more insight on this topic, we reached out to McLean Robbins, Vice President of Marketing at MBO Partners. She explained that there are several key differences between contractors and employees that employers must understand. “Typically, a full-time employee works for a single employer and the employer dictates and controls the work performed as well as the hours and location of work,” MBO Partners explains on their site. “The employee is also entitled to legal benefits of a W-2 employee.”

The first difference that MBO Partners specifies between employees and contractors is the relationship they have with who they are working for. Independent contractors might be sole proprietors or work for an outside company providing specialized services. “While employees typically receive some sort of training surrounding their job duties, independent contractors bring specialized expertise to a project or task,” they add. “As a client, you’re not responsible for providing them with training.”

Independent contractors are also not locked into working exclusively with one employer or business. Even if they have a long-term contract, they are allowed to take on additional clients. And while they might complete many tasks for a client they’re working with, they are only responsible for the specific duties outlined in their SOW, or Scope of Work. If an employer fails to respect a contractor’s contract and SOW, as Richard did in this story, there can be serious ramifications.

We also asked McLean if she could discuss some of the pros and cons of being a contractor. “Independent workers in America are now 64.6 million strong, per our 2022 State of Independence in America report, the 12th annual look at the size, sentiments, and growth of the independent workforce in America,” she told Bored Panda. “Today, 87% of independent workers say they are happier on their own, and 80% say it is better for their health. More than six in 10, 66%, say they are more financially secure than traditional employees, and 52% say they earn more money. Half, 48%, say they have more friends working independently today, and 74% are optimistic about their future careers.”

“Primary challenges include finding one’s next project, saving for retirement, and managing the financial variabilities that come with independent work,” McLean added.

In situations like this story on Reddit, when a supervisor is guilty of misclassifying a contractor, they can be liable for paying back national, state and local taxes; they can be required to pay back benefits (such as worker’s compensation, medical insurance, vacation and sick pay); they may face legal fines or class action lawsuits; and they are likely to severely damage their reputations. It is extremely irresponsible for employers to be unaware of the risks of misclassification and to ignore their workers’ contracts.

We would love to hear your thoughts on this workplace drama in the comments down below, pandas. If you’ve ever found yourself in a similar situation, feel free to share you personal stories, and then if you’re interested in reading another article featuring malicious compliance in the workplace, look no further than right here!

Readers applauded the contractor, calling out his boss and sharing some of their own similar stories 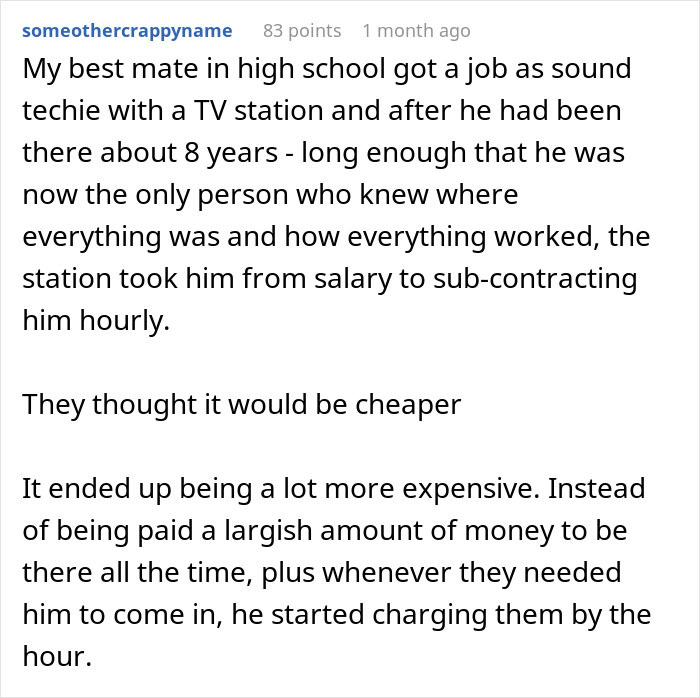 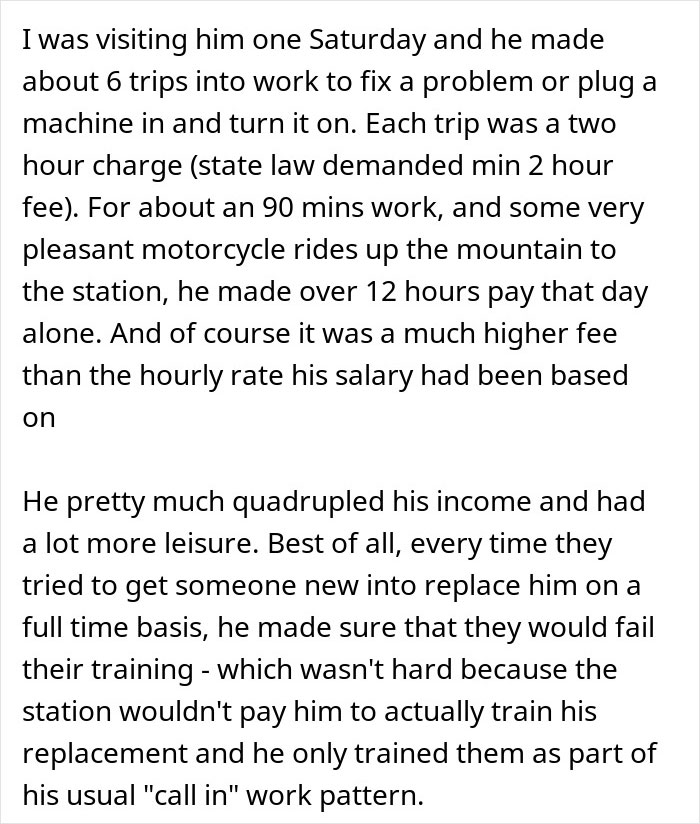 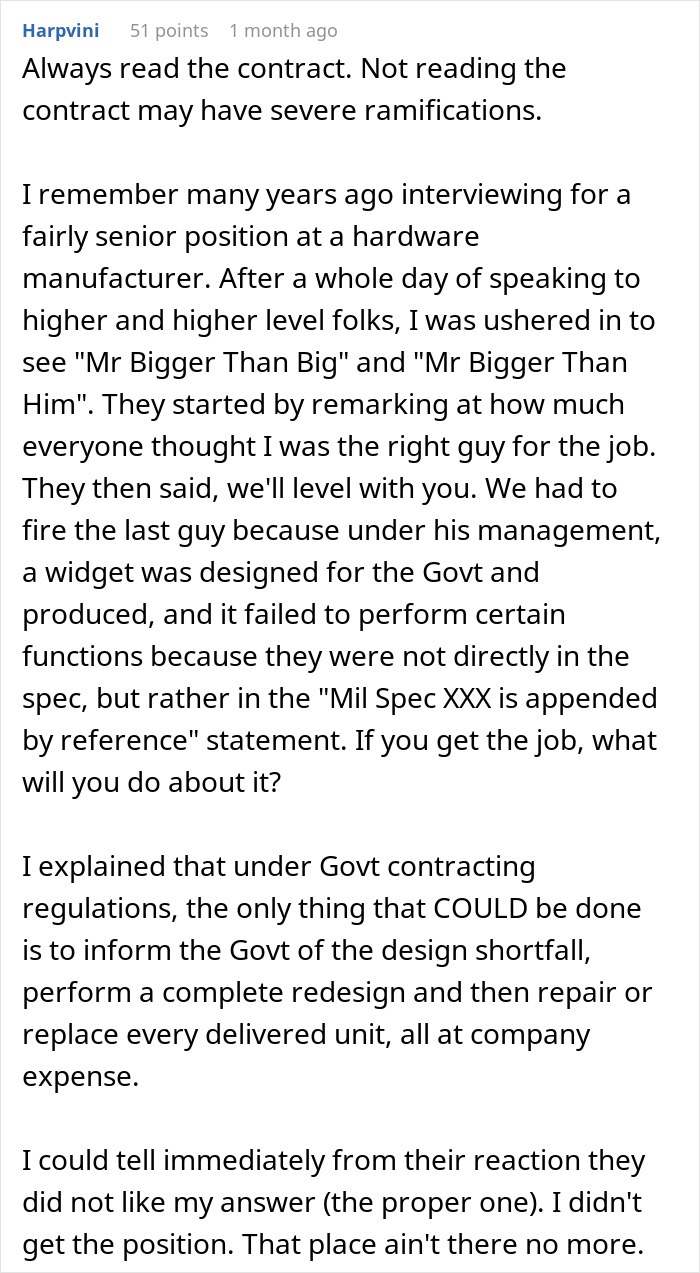 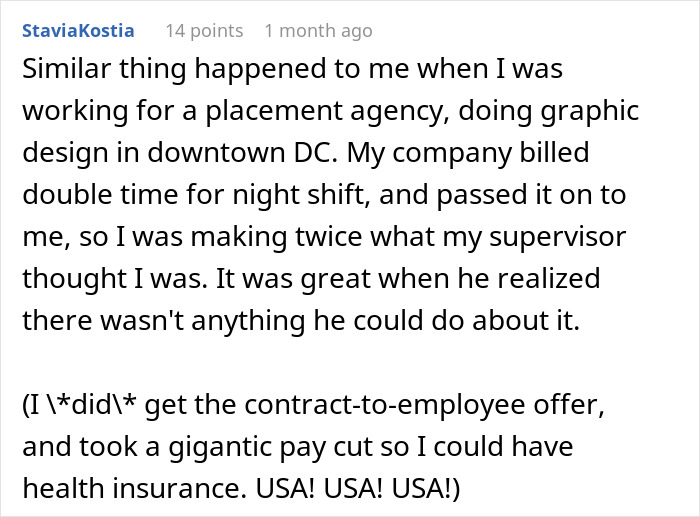 The post New Boss Goes On A Power Trip Ignoring Employee’s Contract, Regrets It After Forcing Him To Rack Up 1,300 Paid Hours In One Month first appeared on Bored Panda.