Not everyone is lucky enough to have a school on the other side of the road from their house and sleep in without worrying about needing to catch a bus or getting stuck in traffic with their parents in their car and potentially being late. But it’s a reality for many students and a headache for some parents who have to wait in long lines to drop off their kids because they have places to be.

One elementary school in Ohio noticed that some parents take too long in the drop-off lanes, so they thought they should put up some signs reminding the drivers it is not a parking space. The parents loved the signs not only because they were helpful, but they were also quite fun and nostalgic.

An elementary school in Ohio noticed that parents were taking too long to drop off their kids, so they came up with a creative approach 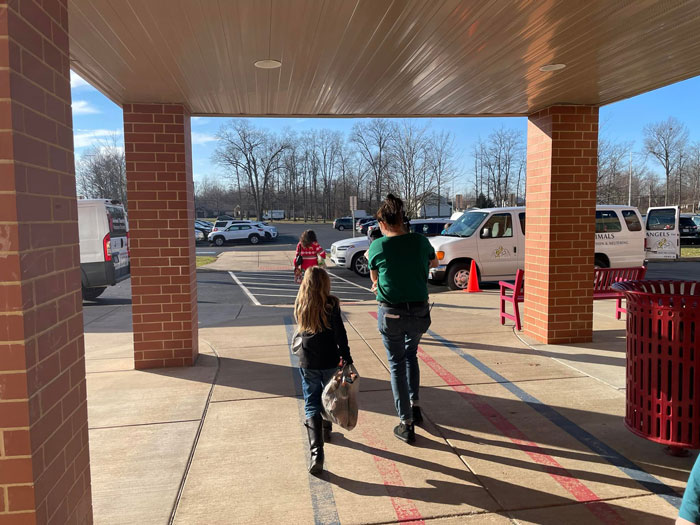 According to the Safe Routes to School (SRTS) guide, “A drop-off and pick-up lane is an area on a street adjacent to school grounds or directly on the school grounds that is dedicated to the loading and unloading of students by private motor vehicles.”

The lane is a no-parking zone and the car should move immediately after the children are out of it and there are no children in the car’s way. But it seems that the system that should make dropping off children quick and convenient becomes slow and nerve-wracking.

It takes time to wake up in the mornings, so the kids can be a little slow, don’t want to go to school or the parents want to end a conversation they started before arriving there or even check their phones as they have already stopped, so the cars stop in the drop-off area longer than they are supposed to.

Drop-off lanes are a no-parking zone, so you only can stop there briefly, and according to the DMV, that means you can drop off or pick up passengers and merchandise only. Clearly, drivers abuse the rules, because a school in Ohio had to put up signs to remind parents they should be on their way as soon as their children are out of the car. 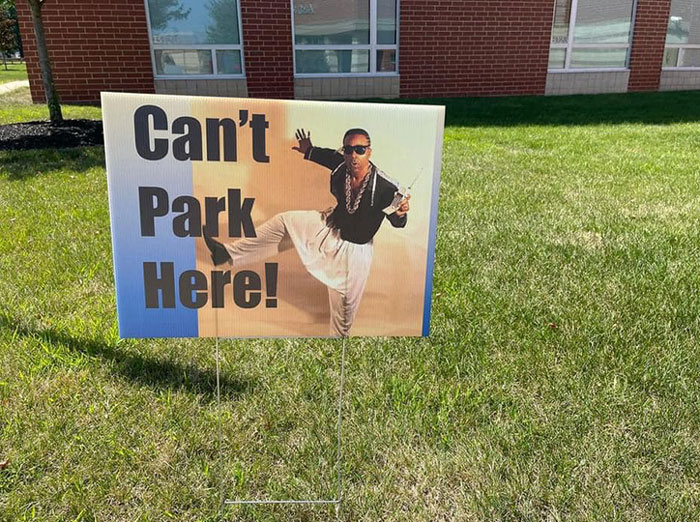 The school created some meme-like images featuring celebrities that are very well known to parents to make sure they know what the drop-off lane rules are. The photos of the signs were shared in the school’s parent Facebook group and one of the parents said that even though the kids might not get why the signs are so entertaining, they surely do.

The signs have the faces of The Department of Motor Vehicles, Ryan Gosling and Ross from Friends on them encouraging parents to say bye to their kids, to not block the lanes and not park in them. 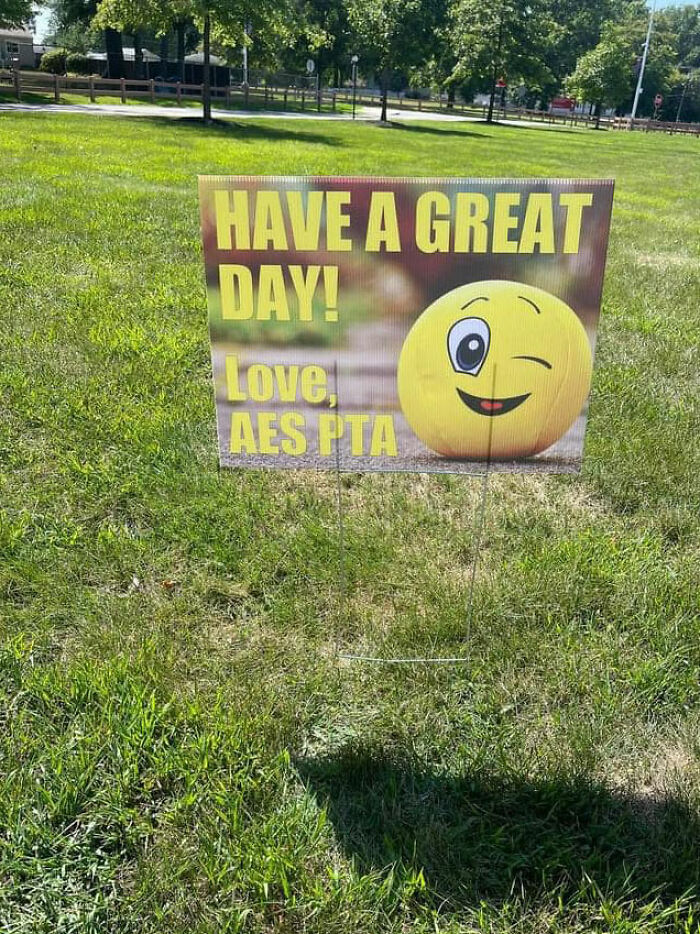 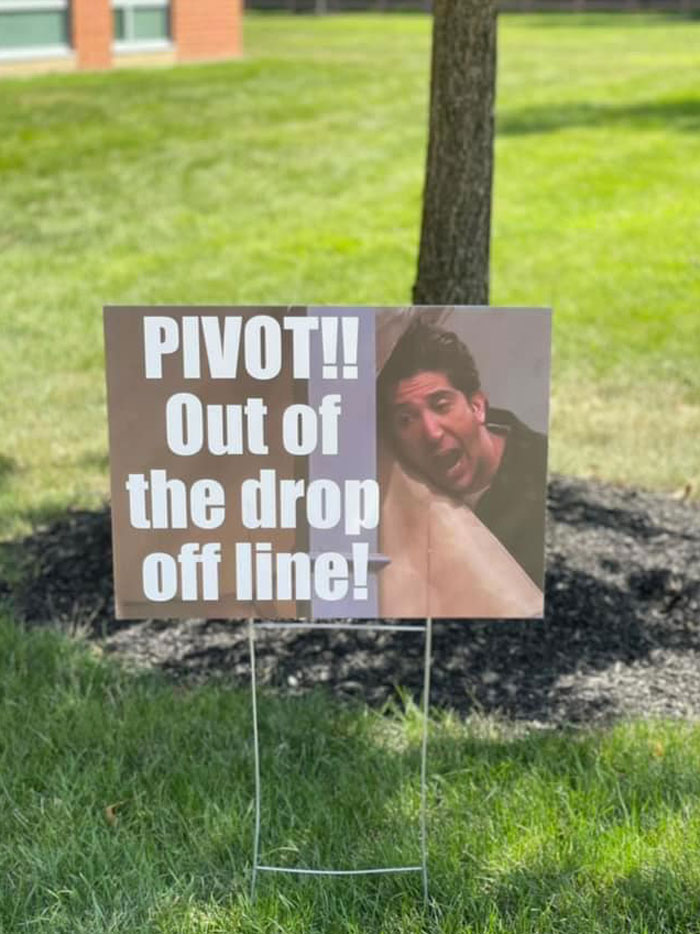 The president of the Austintown Elementary PTA Jessica Lippillo told Today Parents that the drop-off lines at their school were usually running smoothly, but “this year, some of our kids are attending school for the first time ever because of COVID. Students and parents are feeling anxious and I wanted to alleviate their stress.”

Instead of penalizing the parents or sending them passive-aggressive emails, the school wanted to show that they have a sense of humor and decided to put up a reminder with a comical twist. Although the signs will be removed after a week, the director is already thinking about what the school will surprise the parents with at the end of the year. 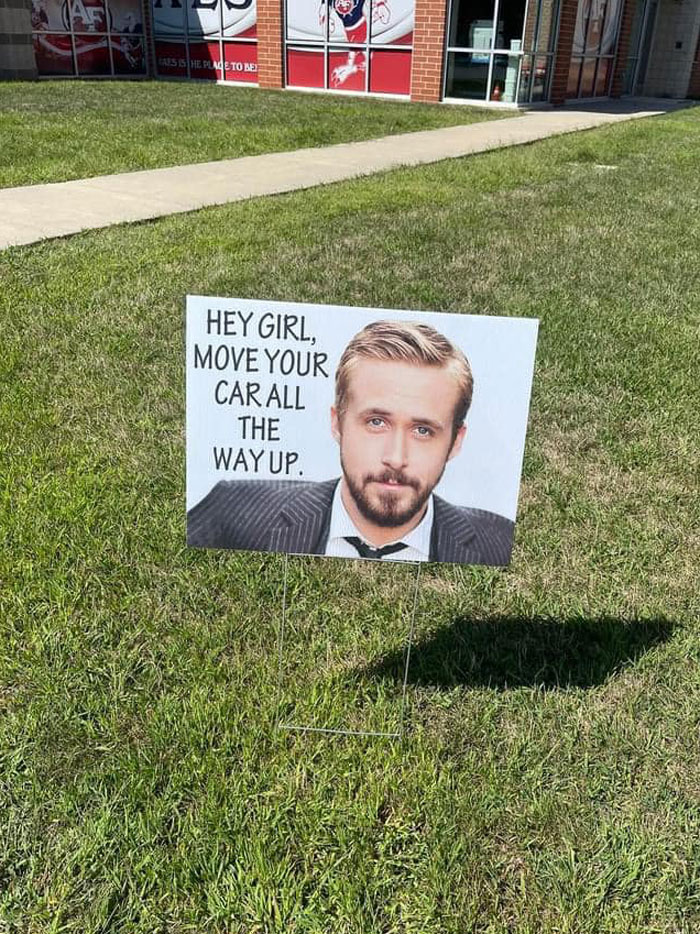 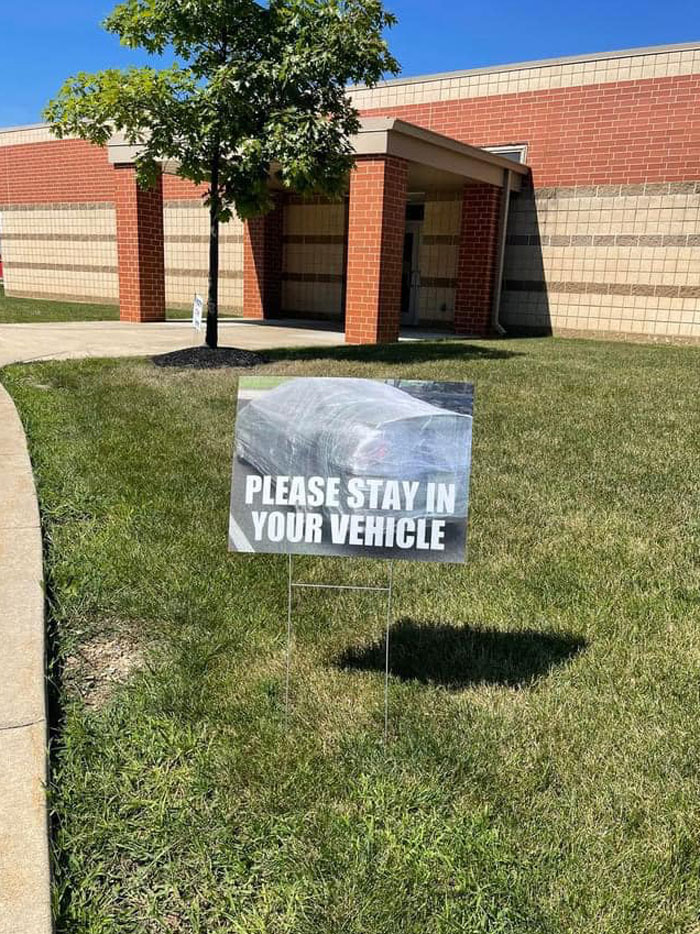 A video explaining how to make the process quicker without holding up the line went viral on TikTok and in the comments, both parents and teachers were thanking the video creator, Teasha Witherspoon, for spreading awareness about it.

Her 5 tips are putting your kids on the passenger side and if you have more of them, teaching them how to shuffle to the other side efficiently to get out of the car. Teach them to be prepared to open the door when their turn to go comes and don’t open the door yourself. She also suggests making the kids have their backpacks on and not stopping completely but going a few miles per hour just to keep going and not blocking the line.

They put up some meme-like images with reminders of the drop-off lane rules, which the parents and the internet loved 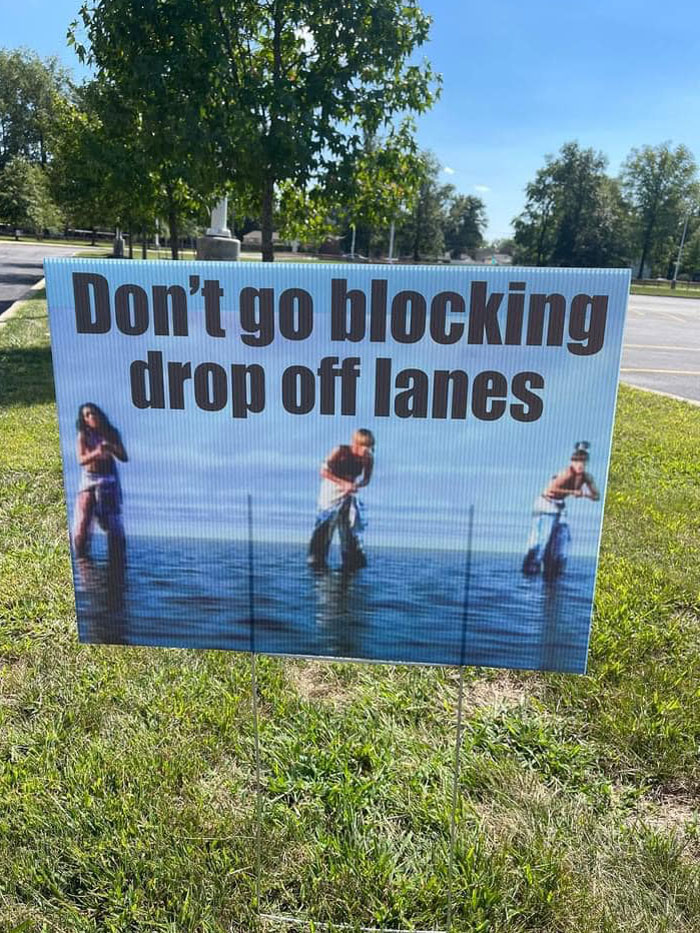 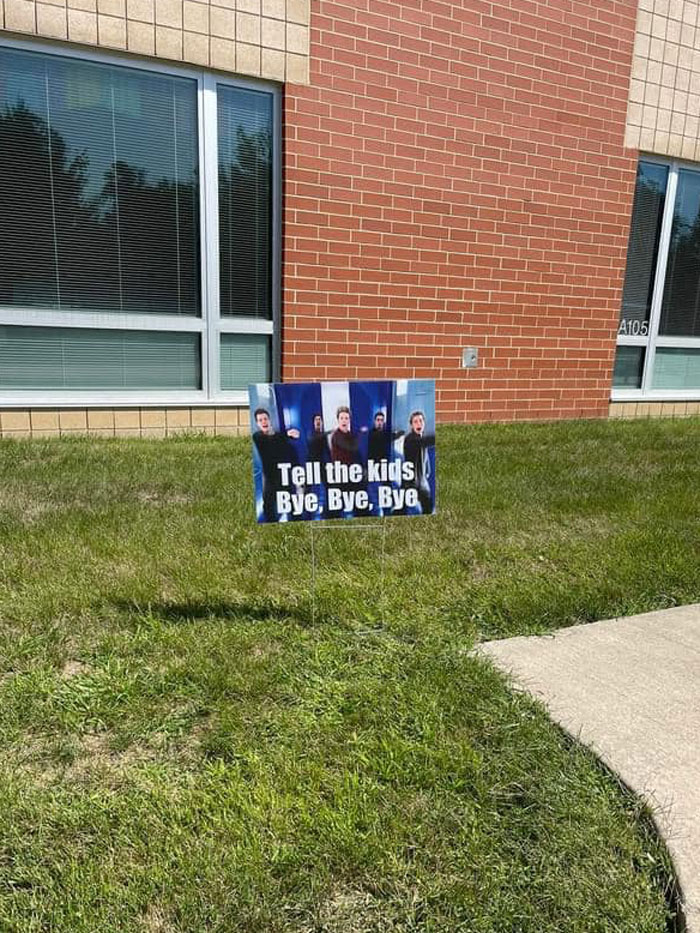 Do you get stressed when you need to drop off your kids at school? Do you feel that these kinds of signs would make the lines go smoother at your children’s school? Let us know what you thought about the school’s idea and what other advice you can give parents who can’t seem to figure this process out! 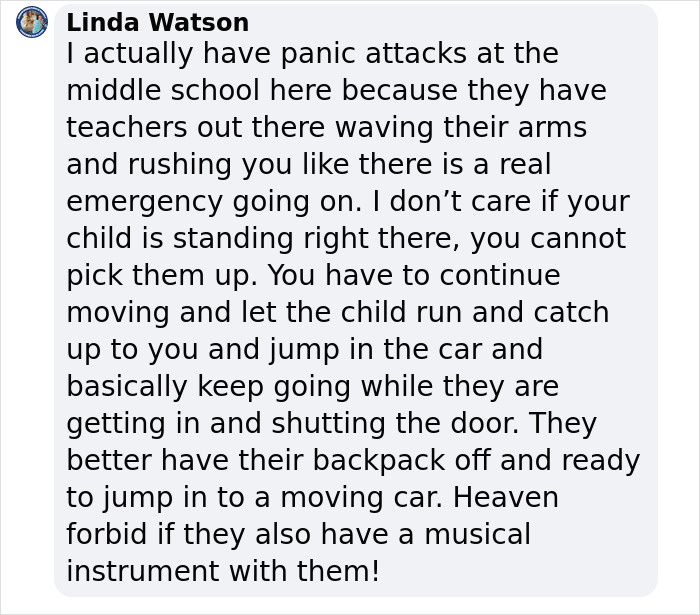 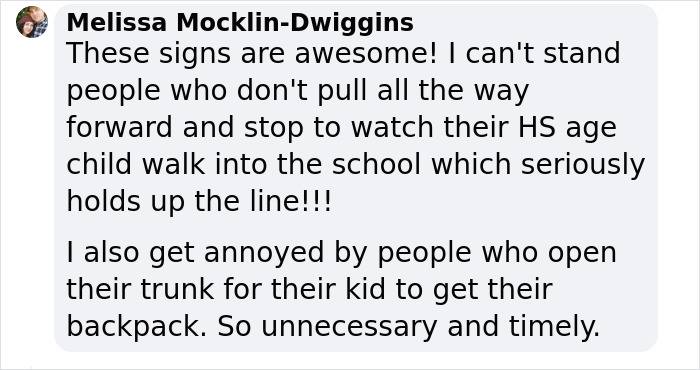