They say that cats rule the internet. And that is not an overstatement.

There are so many pictures and videos of cats—regular Joe Schmo felines as well as meowebrities—on the internet doing all sorts of ridiculous things that many forget that cats actually have a purpose on this lovely planet of ours. Among many other things, they excel as pest control experts.

This one botanical garden actually has a number of cats living inside it for this very reason. But even here, the cats manage to find their way on to the internet and go viral. And one cat is now in the spotlight, raising more questions than there are answers at this point.

Despite what the internet might lead you to believe about cats, they do actually have a very important function, and that is pest control 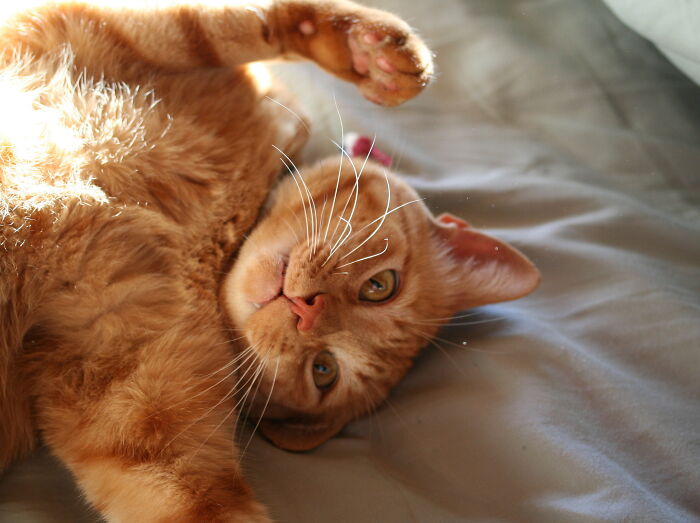 Squid biologist and creator of the SquidMobile, Sarah McAnulty, has recently visited the Longwood Gardens, a spectacular botanical garden located a short drive west from Philadelphia, PA. But instead of experiencing the garden’s rich history and vast variety of flora, the one thing that was on Sarah’s mind (and by proxy, on the internet’s mind) is what the heck did Persimmon do?! Oh, and Bored Panda got in touch with Sarah for more information on the matter.

Well, this one botanical garden has loads of them for this very reason, but it also has to deal with whatever shenanigans they might be up to 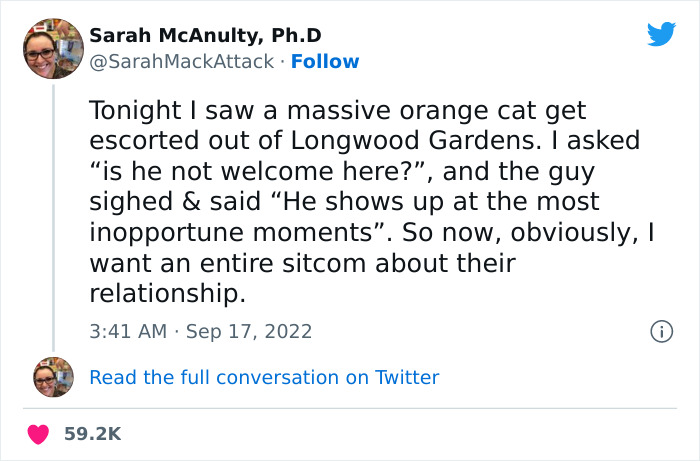 OK, context time: besides flora, turns out, Longwood Gardens is also home to some fauna in the form of cats. And there are loads of them. But Sarah’s recent tweet that followed her visit to the garden refers to a particular one—an orange tabby by the name of Persimmon.

You see, Sarah recalls seeing an orange cat being escorted out of the Longwood gardens by one of the employees. This piqued the biologist’s interest and so she asked about it. The man escorting the cat sighed and said “[S]he shows up at the most inopportune moments”. Sarah joked that she now wants an entire sitcom about their relationship. [Cue the intro to any cinematic iteration of the Garfield show.]

“Many people immediately recognized her from my tweet, even though I didn’t include a picture. Folks started replying with their pictures of her and they were the exact same cat. She apparently is one of Longwood’s resident cats and is often found wandering around the conservatory,” explained Sarah.

Following biologist Sarah McAnulty’s tweet about Persimmon the orange tabby’s arrival at an “inopportune moment”, folks started sharing their run-ins with her 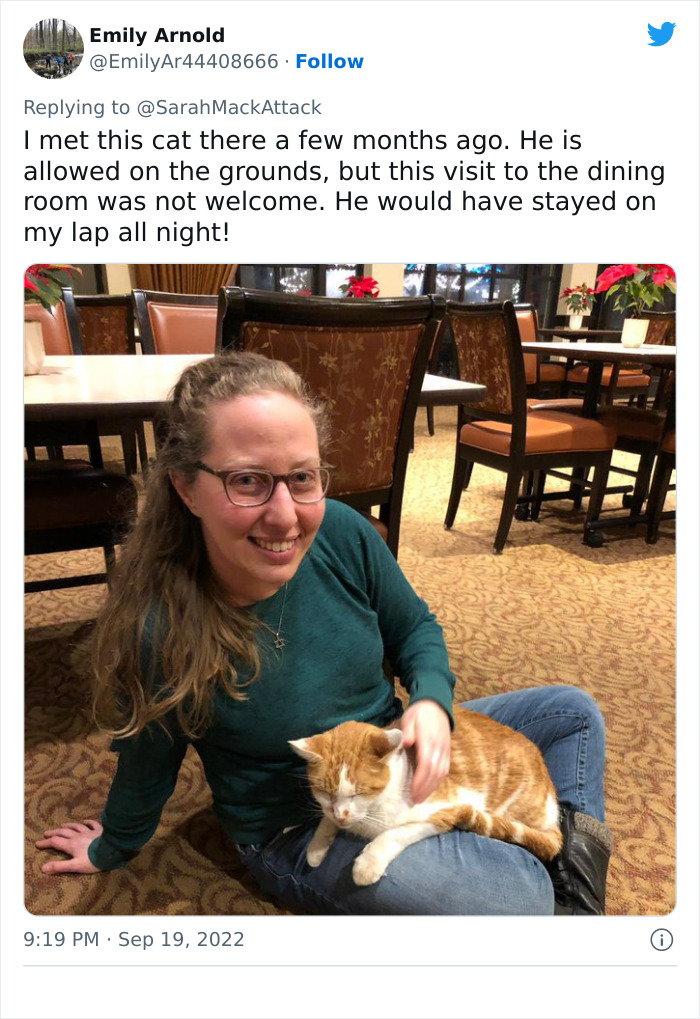 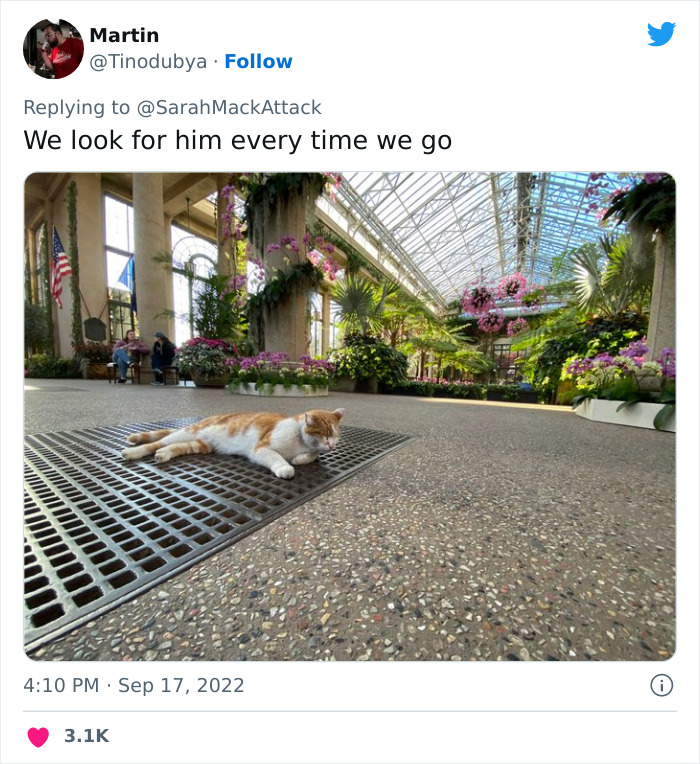 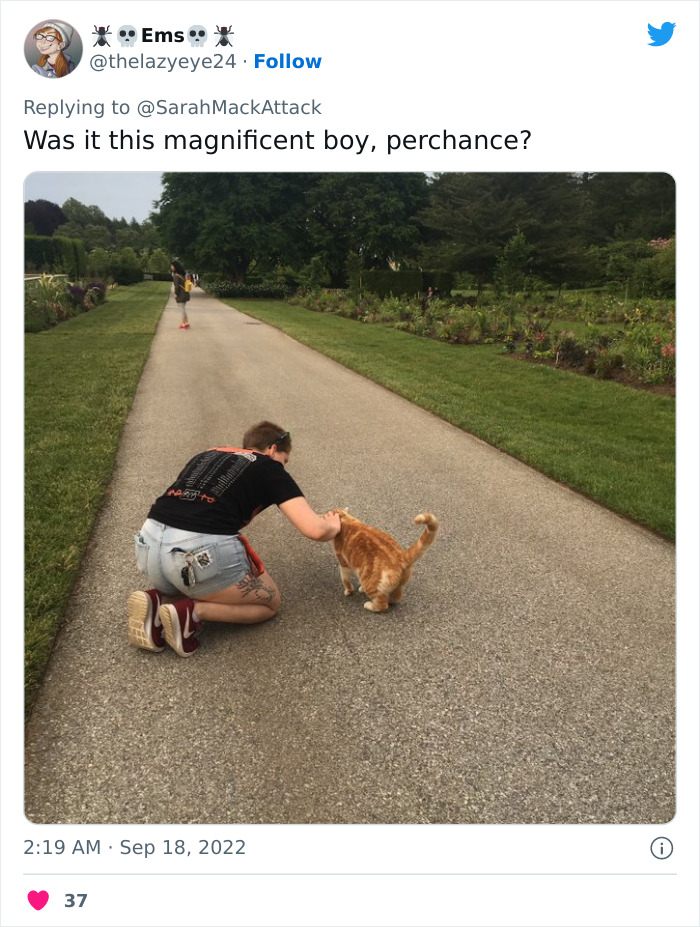 But going back to that very legit question: what are these inopportune moments? What did Persimmon do? Does this happen often? Where do I subscribe for more Persimmon content? Sarah had some ideas, but we also did some digging, and here’s what we found.

As mentioned before, Longwood Gardens is home to many cats. The garden’s website explains that the origins of these cats are mostly unknown, but they now live there and are taken care of to the fullest extent in exchange for entertainment, companionship, and elite pest control services.

So, it comes as no surprise that many folk reacted to Sarah’s now-viral tweet with pictures and stories of how they happened to meet Persimmon. We also know the cat’s name because of a tweeter, and they also claim it’s a she. 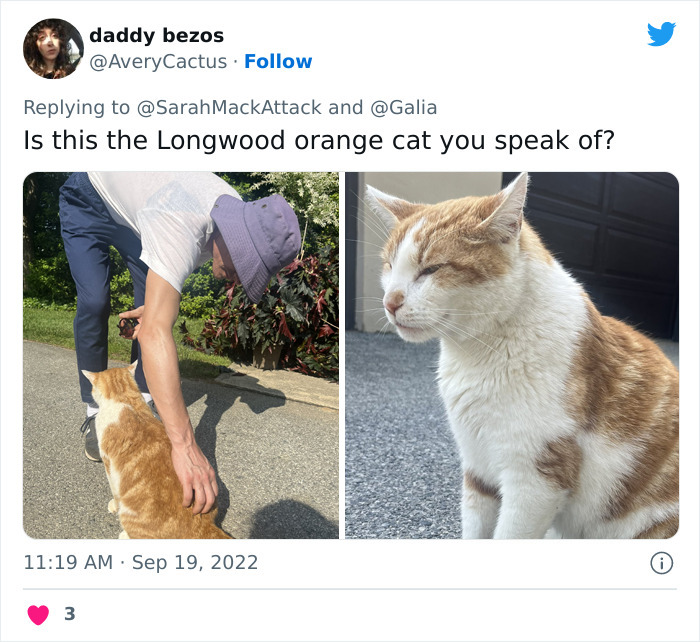 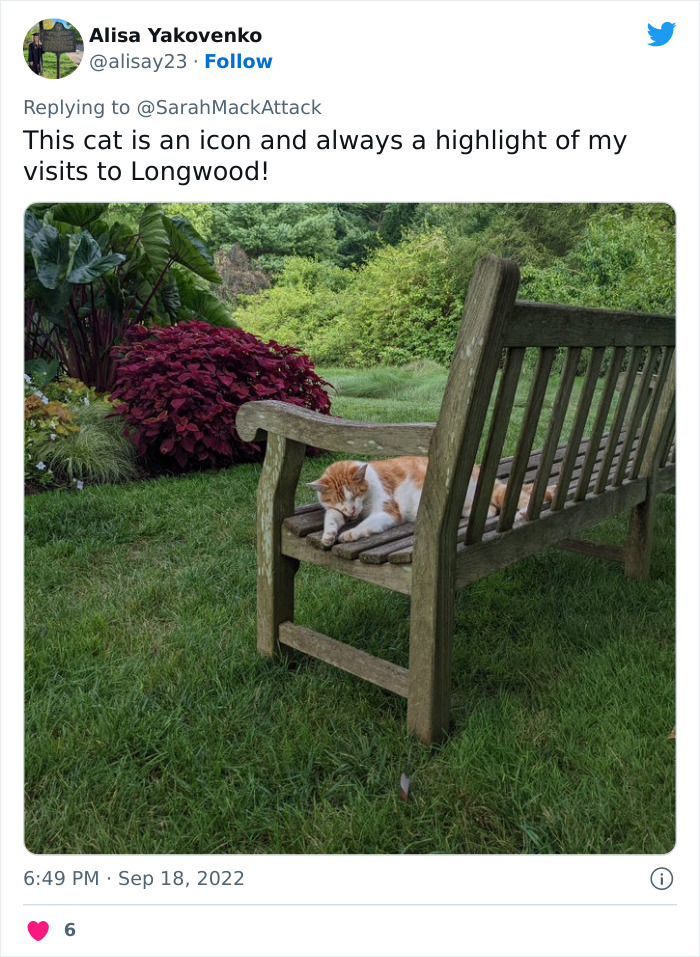 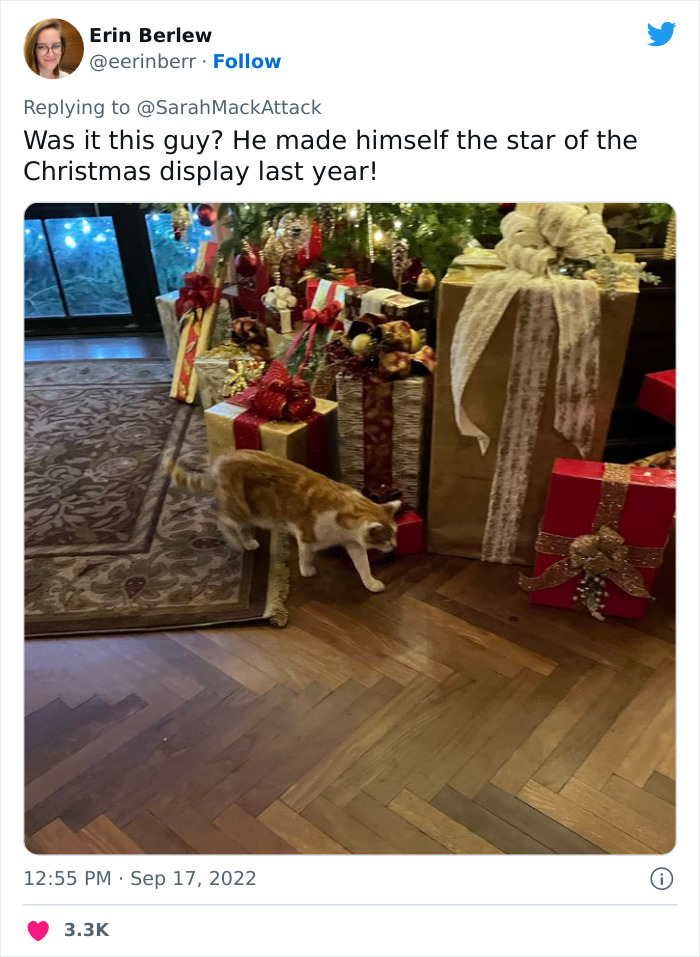 The website suggests and tweeters speculate that Persimmon was probably being relocated back to her respective territory. Turns out, each cat is responsible for their own little space in the garden, but for whatever reason, this one left her post in favor of doing cat things.

“I suspect walking into places that cats aren’t supposed to go, like underfoot in the dark like she was when I met her, or maybe climbing in a Christmas tree around the holidays,” added Sarah. “Persimmon seems to enjoy being the center of attention, and she deserves it.” The plot of this sitcom thickens. 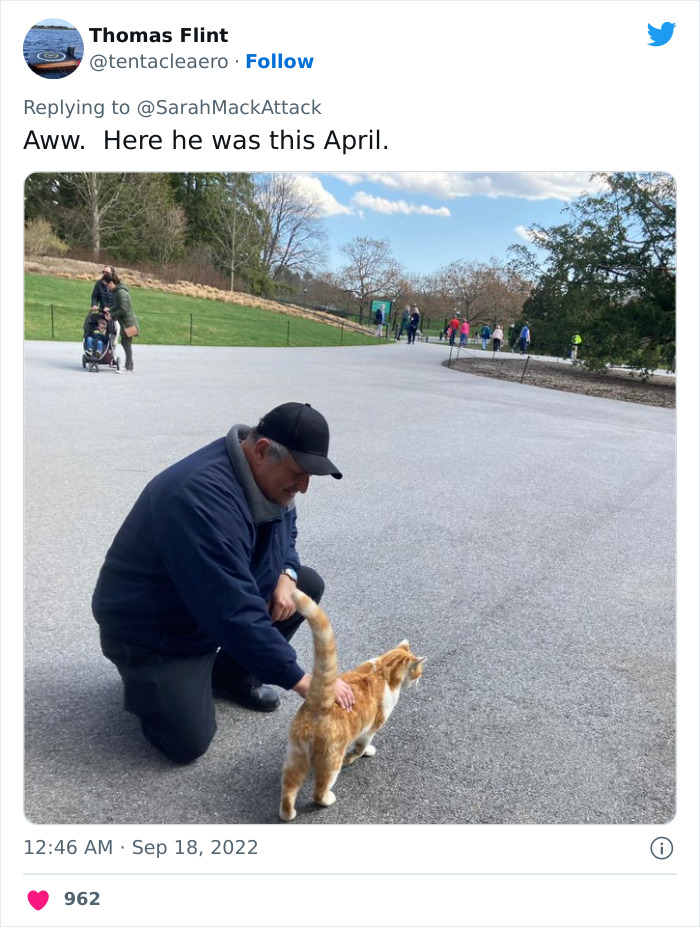 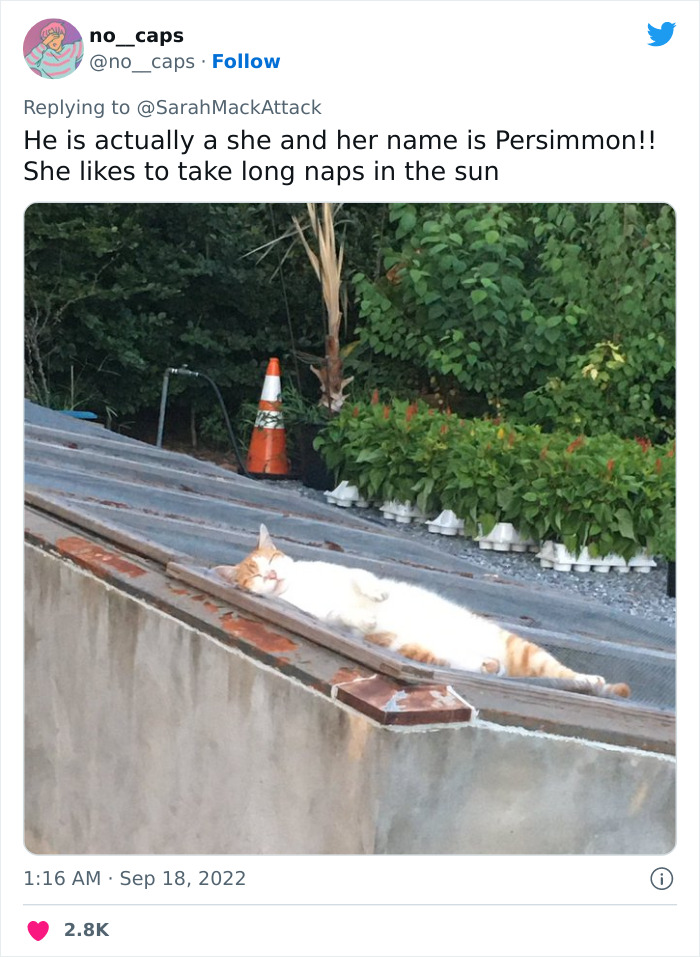 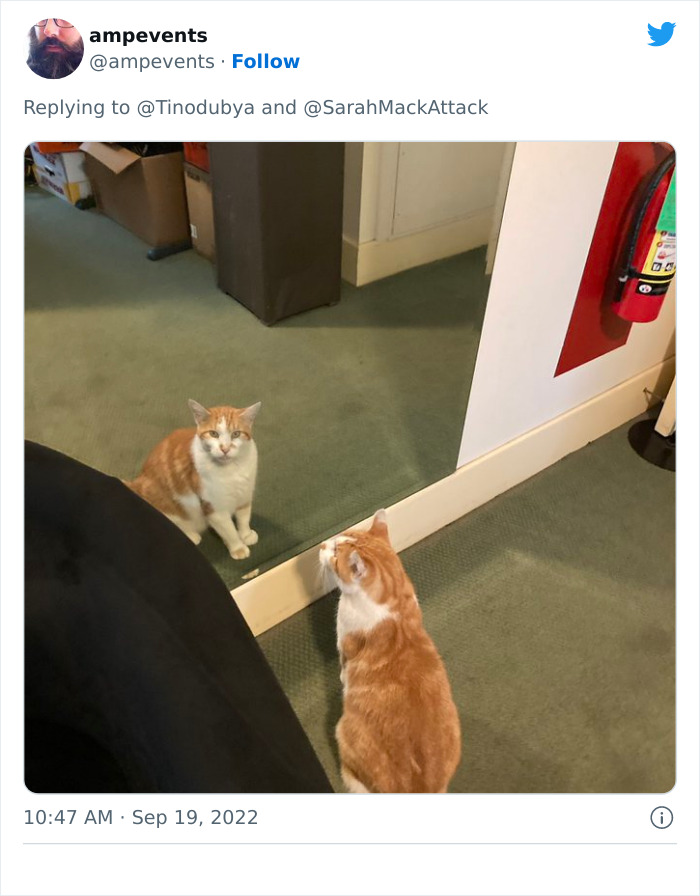 According to folks on Twitter, Persimmon is a friendly cat as she would have probably spent a long time on this person’s lap, if not for another relocation out of the dining room as it was off limits. She also loves pets (meow, meow and meow), and has no problems doing what cats do best, and that is sleeping (meow, meow, and meow).

Well, Sarah was quite surprised to see many people recognize this particular cat from her simple description. And those who did not recognize the cat still shared some pictures of their own orange cats. Whatever the case, many said that they would watch this particular sitcom, and now it has to happen at this point. 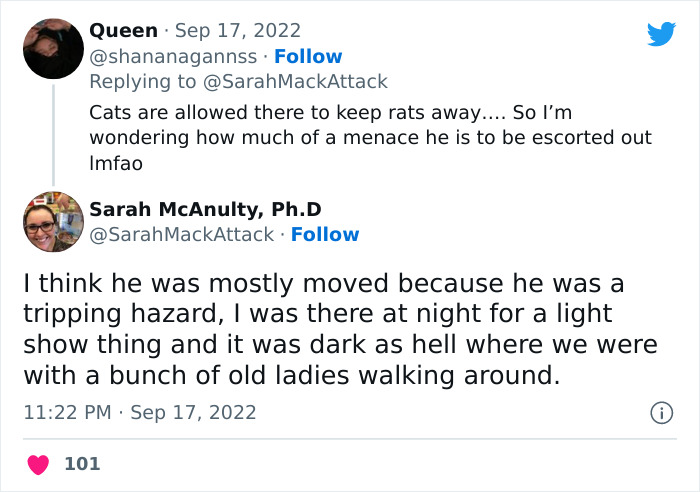 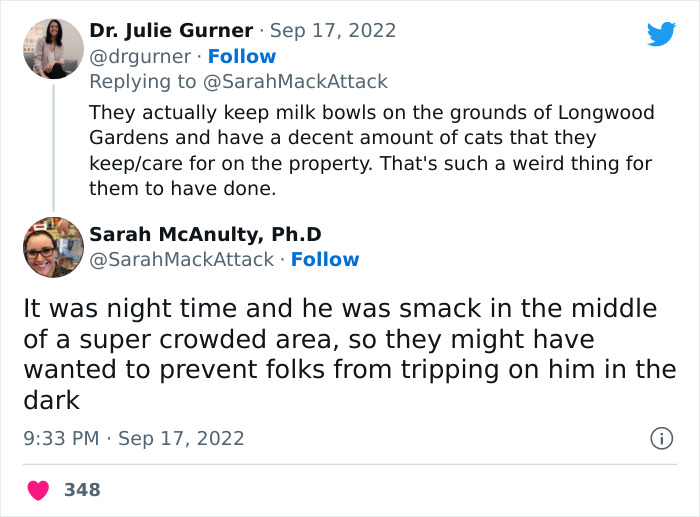 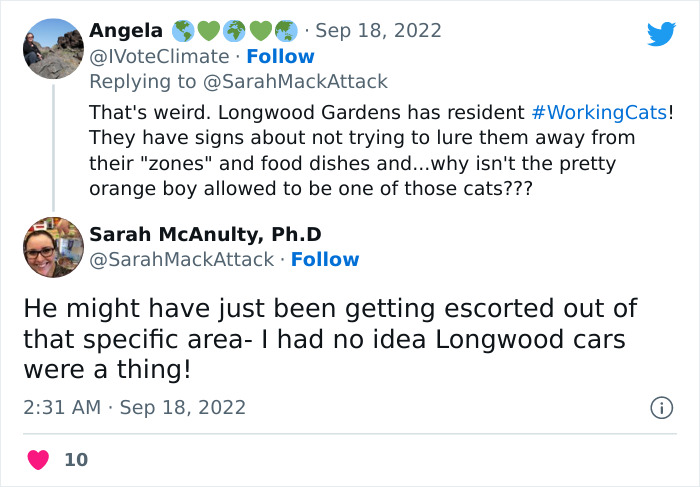 And those who had no idea who Persimmon was shared their own orange cats, giving off more of the same aura as Persimmon 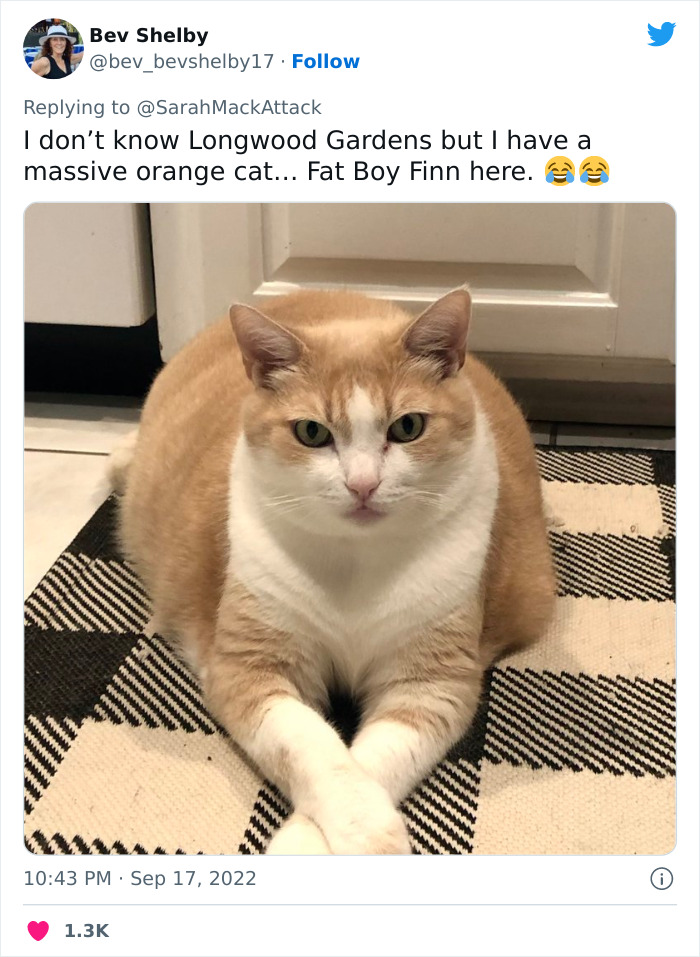 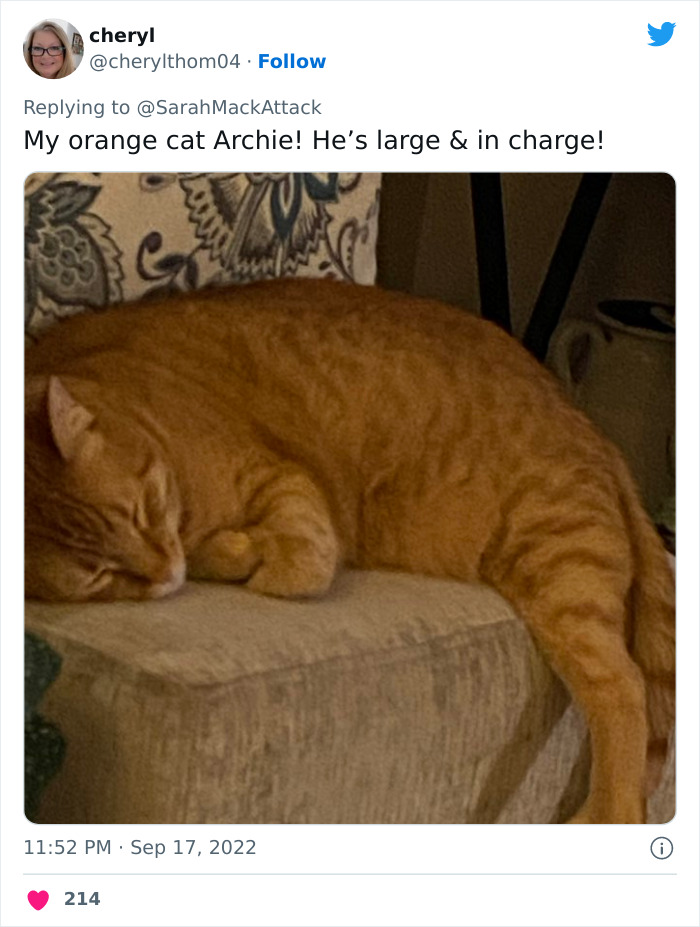 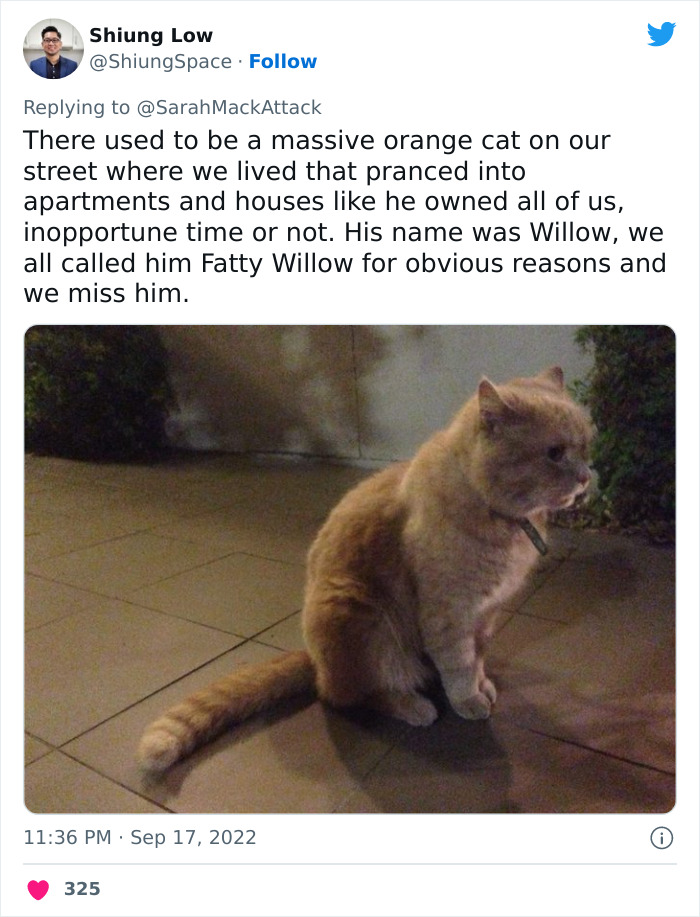 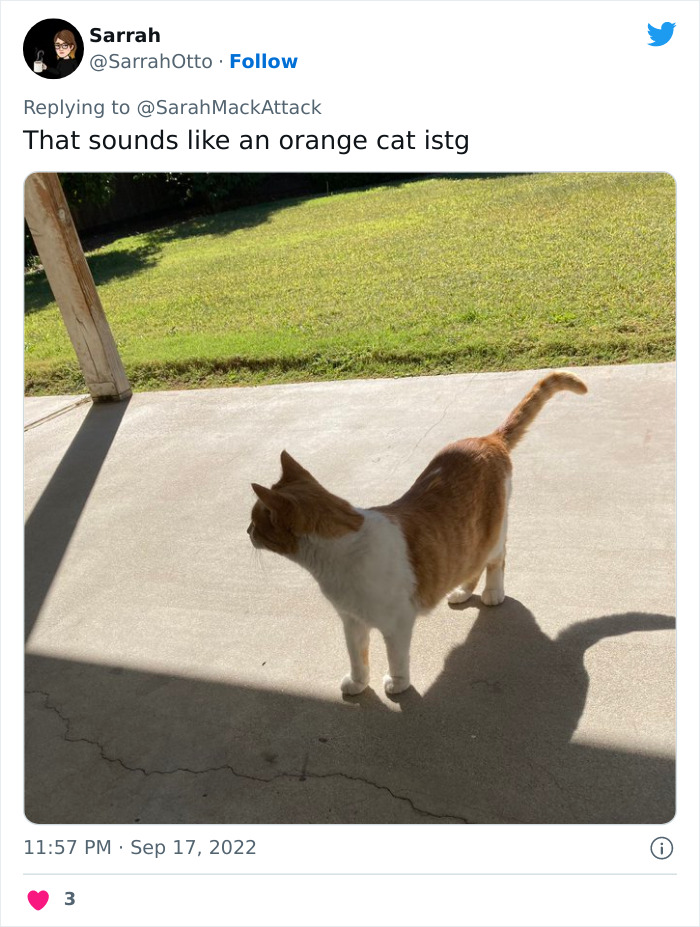 And before you go wondering why a botanical garden might need cats as pest control, let’s put it into perspective: when you have hundreds, if not thousands, of species of plants that may or may not have a price tag closer to that of a brand new 2023 Ford F-150 truck, and millions of ways to destroy them, it’s nice to make sure some mice or moles or whatever else that like to wreak havoc on the regular do not destroy them one day. There’s more reasons, but this is one of the key ones.

The original tweet went viral with nearly 60,000 likes and over 3,200 retweets 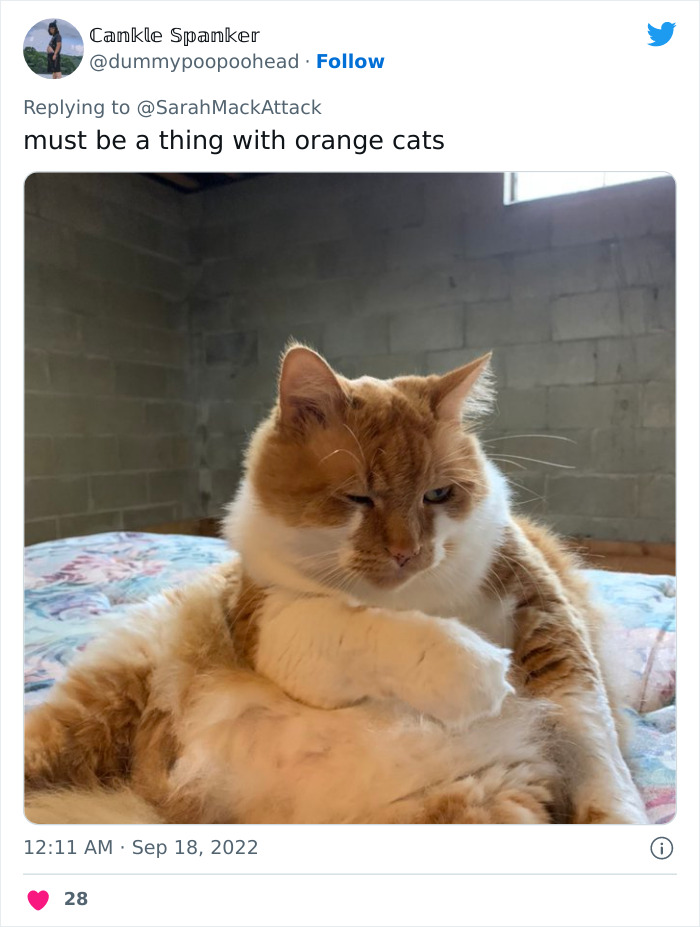 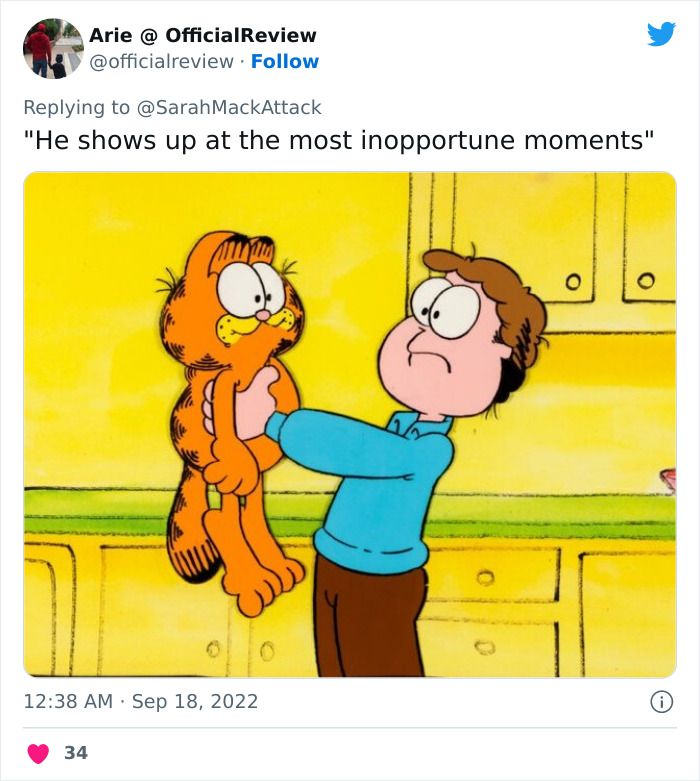 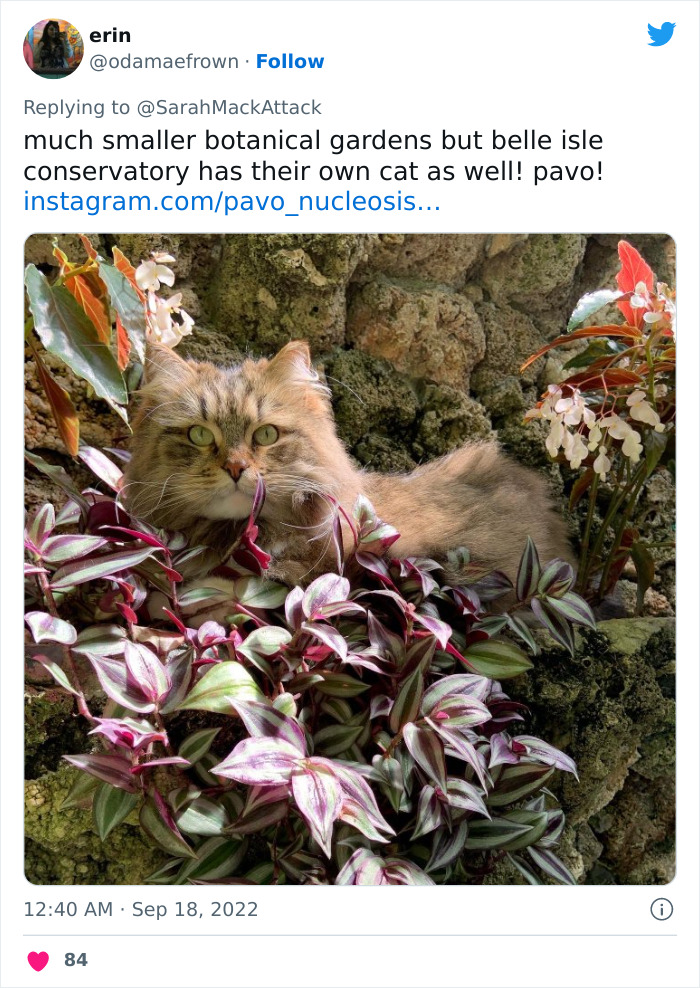 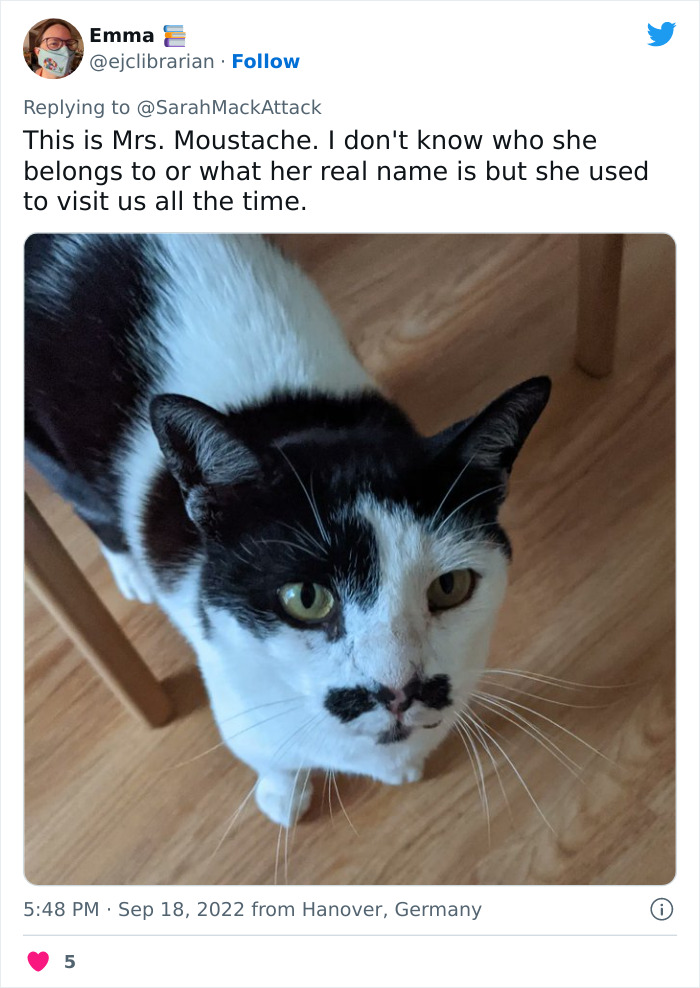 It didn’t take long for Sarah’s tweet to go viral with nearly 60,000 likes and over 3,200 retweets. And to make some online headlines along the way. You can check out the tweet here, and see more of Longwood Gardens’ cats here. Oh, and you can check out everything that Sarah does in life on her website, Instagram, and Twitter. In the meantime, she said she’ll be keeping an out for Persimmon next time she visits the botanical garden, so the saga might still continue. Or if you end up going to Longwood Gardens, do try to find Persimmon and say meow meow meow from us!

But, this article doesn’t have to end this way, and if you’re a regular, you probably already know what to do at this point. And if you don’t, then, first of all, welcome to Bored Panda, we hope you enjoy your stay, and maybe even leave a comment with your thoughts and opinions and reactions and whatever other personal content that you would like to put out there in the comment section below!

The post People Are Cracking Up At This Tweet In Which A Woman Tells How She Saw A Cat Being Escorted From A Botanical Garden first appeared on Bored Panda.