If you’re asking your friend for a favor, don’t antagonize them. Sounds simple? Sure! However, you’ll find that in real life, some people have no problem at all being mean to their pals, demanding that they keep working without any breaks for hours on end, and denying them even food, and water. And then… they act surprised when they can’t take it anymore.

A dog groomer and part-time amateur photographer asked the AITA Reddit community for its verdict on whether or not she was a jerk for deleting their friend’s wedding photos in front of them. Her story went absolutely viral and internet users rushed to express their support for the photographer.

However, we’d love to hear what you think about the situation, dear Pandas! Have a read through redditor u/Icy-Reserve6995’s full, detailed story below.

An amateur photographer’s favor for a friend quickly turned sour 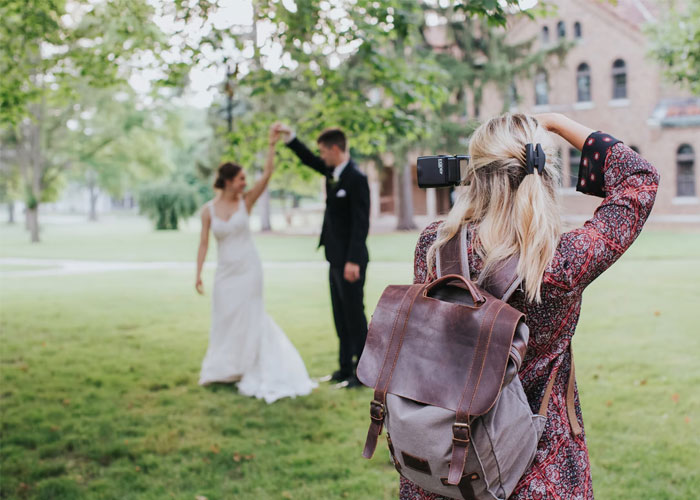 The photographer agreed to take pictures at her friend’s wedding, however, things didn’t turn out quite as she expected 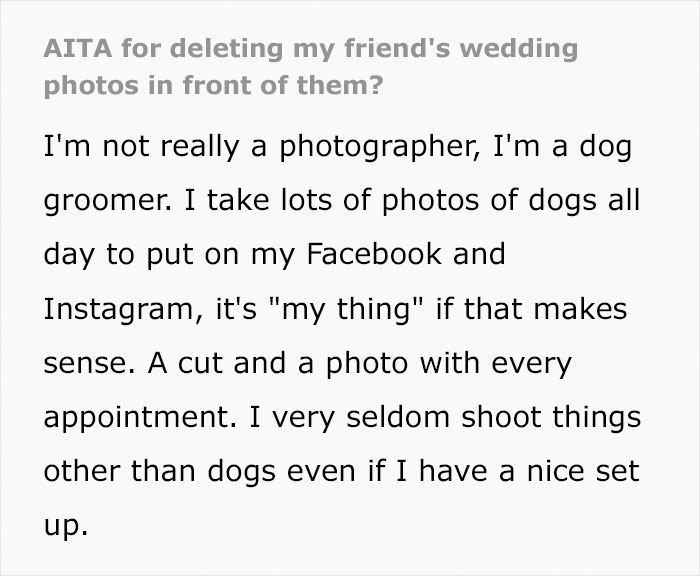 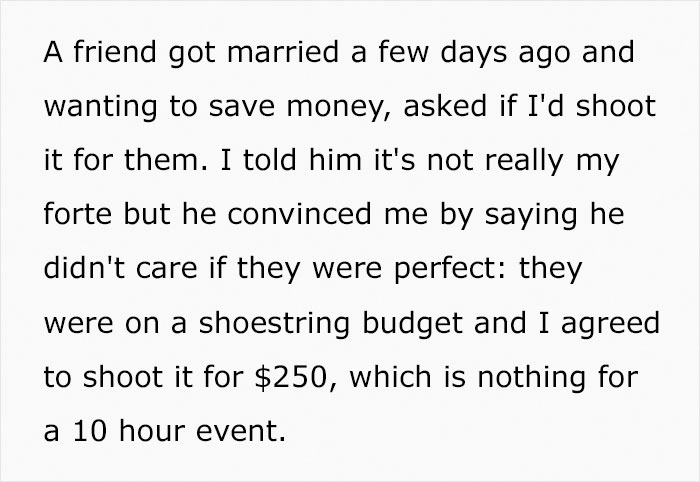 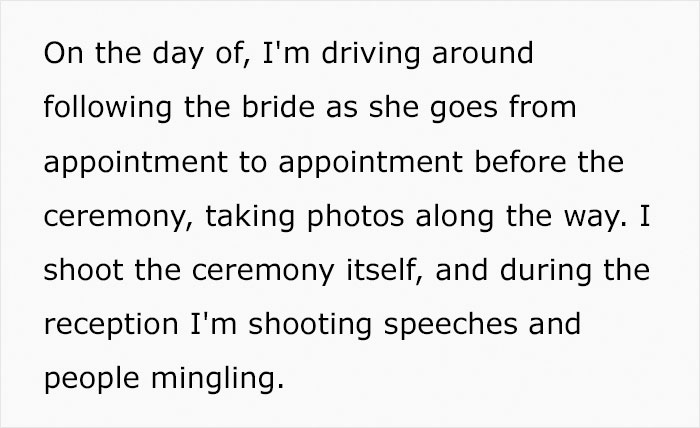 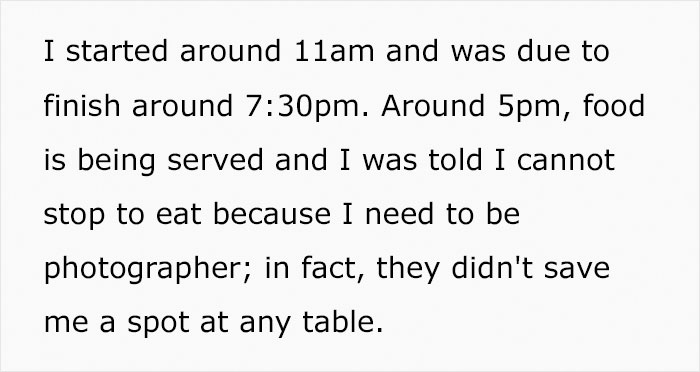 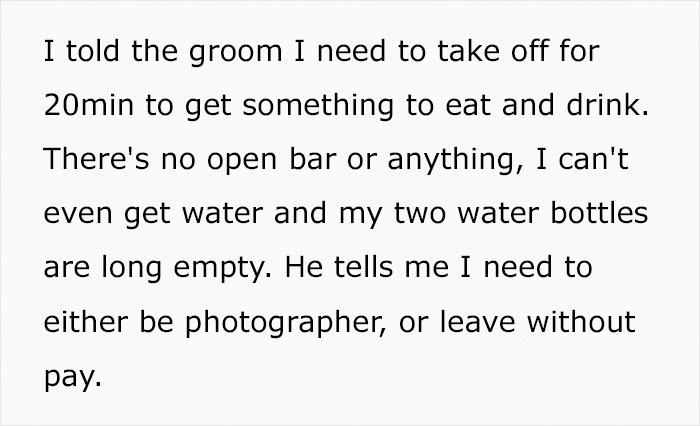 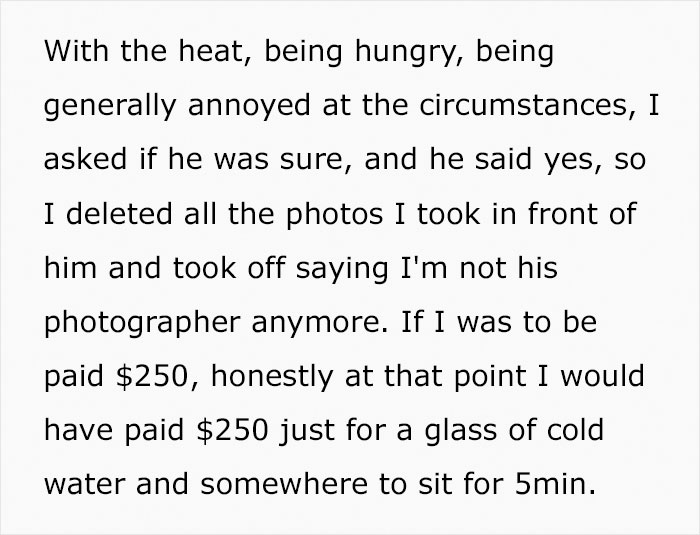 The amateur photographer’s tale on Reddit spread like wildfire online. It got 18k upvotes on the platform and soon caught the attention of some popular news outlets which helped spread the story even further.

The redditor pointed out to the AITA community that she’s “not really a photographer.” However, since she has got to take lots of photos of dogs for their work social media accounts, she’s got some experience with it.

That’s why a friend of theirs reached out, asking to be the photographer at their wedding. They offered her 250 dollars for 10 hours of work. That’s very little money for that much work, but the redditor saw it as helping out a pal on a “shoestring budget.”

Plenty of us have been there, lending our skills to our friends for free or for a symbolic payment simply because we care about them and want to help. So personally, I know exactly where she were coming from. However… this doesn’t mean that your friends can treat you like you’re not a human.

Sometimes, people forget that photographers are real human beings with very basic needs. Like drinking some water. Grabbing a bite to eat. Taking a small break to get their energy back. Unfortunately, the redditor explained how the bride and groom didn’t save them a seat at their table for a meal. They also refused to let the photographer take a 20-minute break to eat and drink. 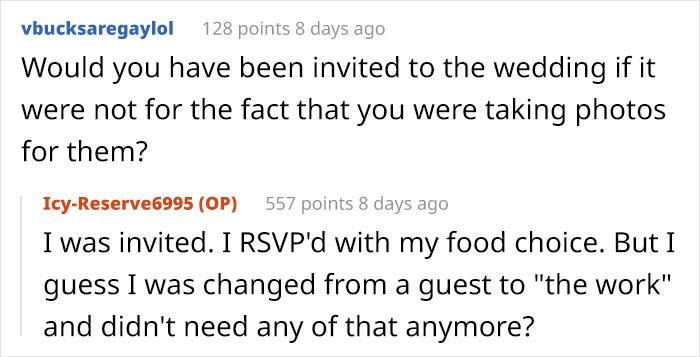 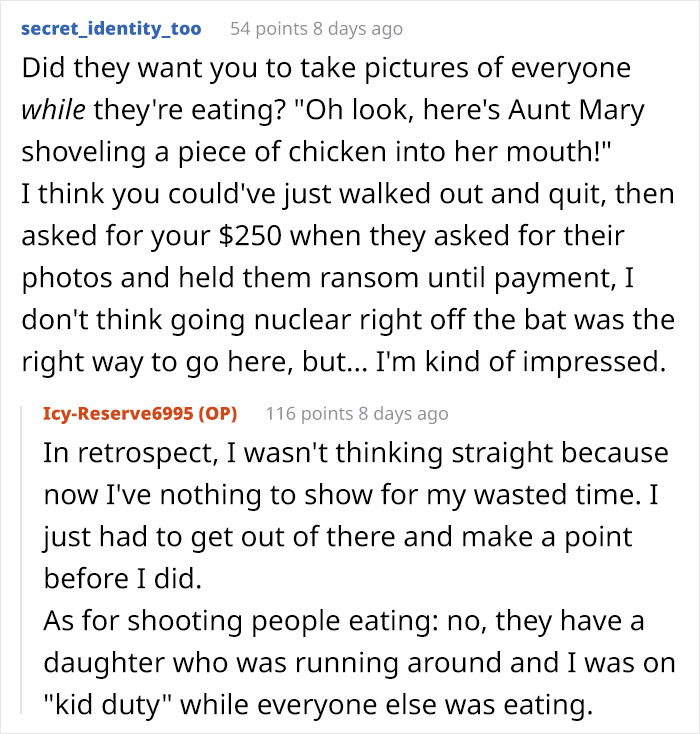 The worst part (at least for me) was that the redditor couldn’t even get a drink of water after she emptied their personal water bottles. She mentioned that it was 110 degrees F (that’s over 43 degrees C) and there was no air conditioning. And I believe that we’ve all been in situations where we’d give practically anything for a nice, long, cool drink of water.

That’s exactly what the photographer did after her friend told them that she wouldn’t get paid if she left at that moment. She deleted the photos right in front of the groom. “If I was to be paid $250, honestly at that point I would have paid $250 just for a glass of cold water and somewhere to sit for 5 minutes,” the redditor wrote. A lot of us can relate to this.

ShootProof explains that one of the most important things that you can do as a wedding photographer is to make everything legal. “One of the biggest beginner mistakes a photographer can make when photographing weddings is not having a signed contract. When you have a legally binding contract, it sets an agreement between you and the client,” they explain.

With a contract in play, your client agrees with your role and responsibilities. “The contract clearly states your tasks and what your clients will receive. It serves as a protection to both parties, especially since there’s money involved.” Of course, this can be a tough question to address with friends, however… stories like the one we’ve just read suggest that sometimes making things official isn’t the worst idea in the book. 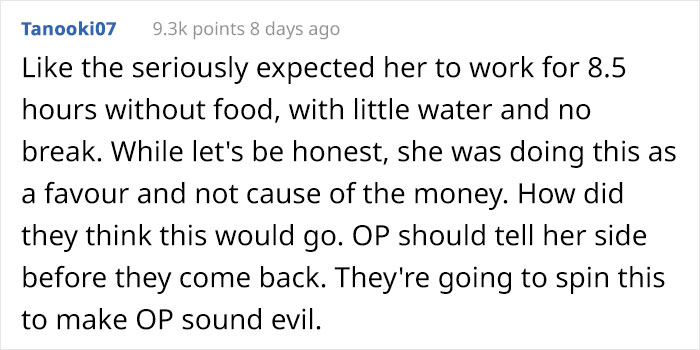 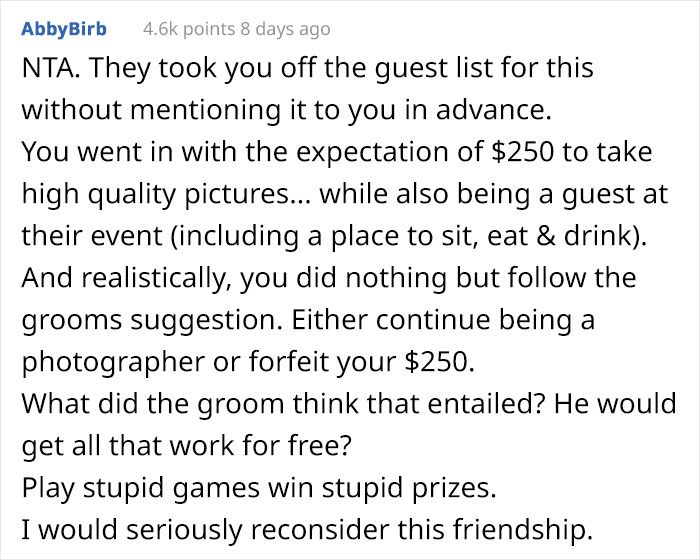 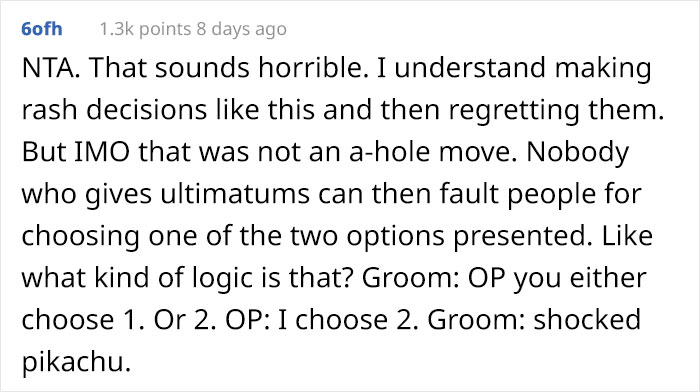 However, some others thought that everybody was to blame in this case. Here’s why they think so 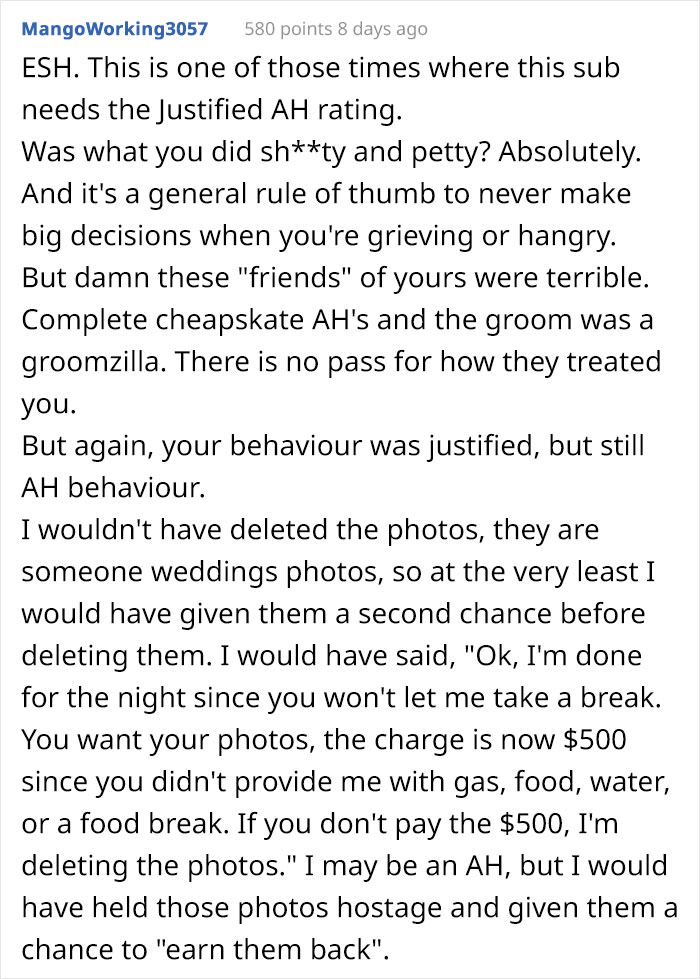 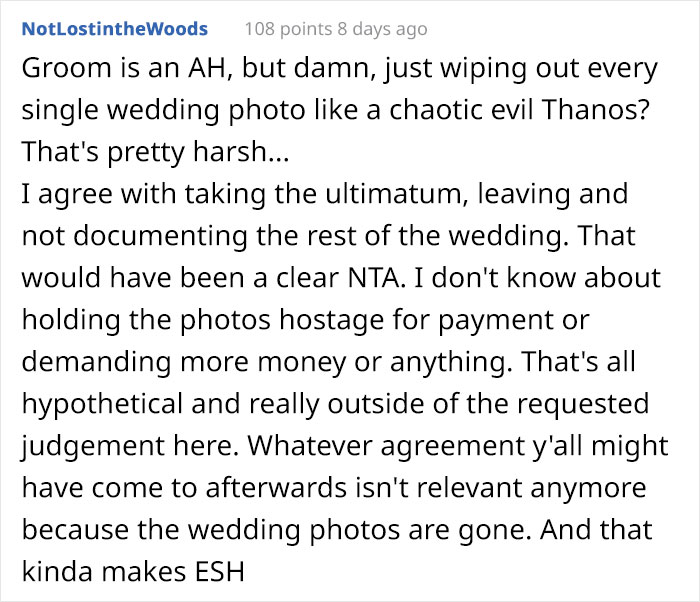 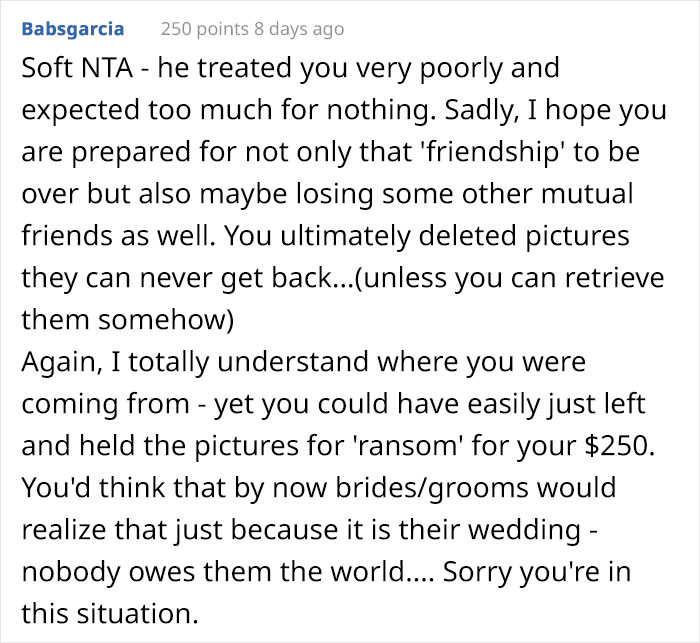 The post Photographer Explains Why She Deleted Her Friends’ Wedding Photos In Front Of Them, Asks If She Acted Like A Jerk first appeared on Bored Panda.