Imagine you’re moving into your dream house and speaking with its previous owner as they hand over the keys. They let you in on a little secret. Not only will you be worrying about what color to paint your walls and how not to burn everything down with a toaster, but also about a little creature that’s gotten used to coming by the home for snacks and water.

Let’s say the previous owner had befriended a raccoon, making it now your responsibility to ensure its livelihood. Exciting times. That’s exactly the situation this new house owner found herself in, but she didn’t seem to mind. On the contrary, she’d grown close with the small animal. So close that it brought its babies to meet the friendly human!

Before we dive into the details of this sweet story, I’d like to ask you, dear trash panda, not to rush towards a nursery of raccoons with berries in hand, as most won’t be so friendly. Also, leave your thoughts in the comments, upvote the story, follow the author, and have a fantastic time looking at this adorable raccoon family.

Brittany Seidel was greeted by a surprise one day, when Roxie, the raccoon she’d been feeding, came by the house with four new babies 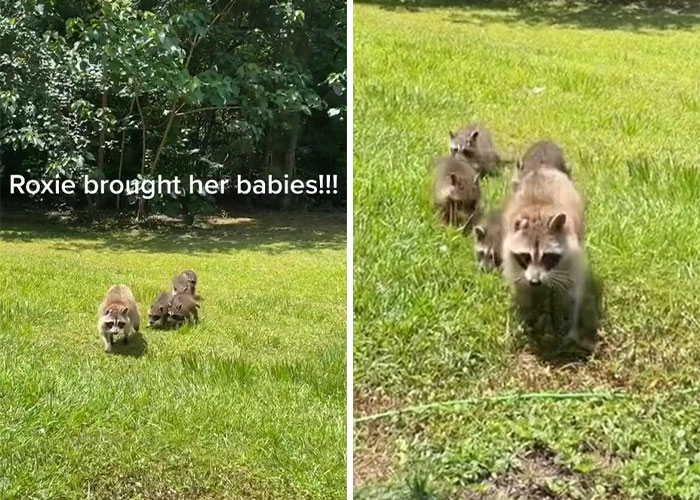 Roxie the raccoon had just become a mom to four babies. Of course, she had to show off her bundles of pride and joy to her favorite human, Brittany Seidel.

So the family trotted onto the familiar lawn of the house which showered the raccoon with lots of love and affection, even before Brittany had become its lawful owner. 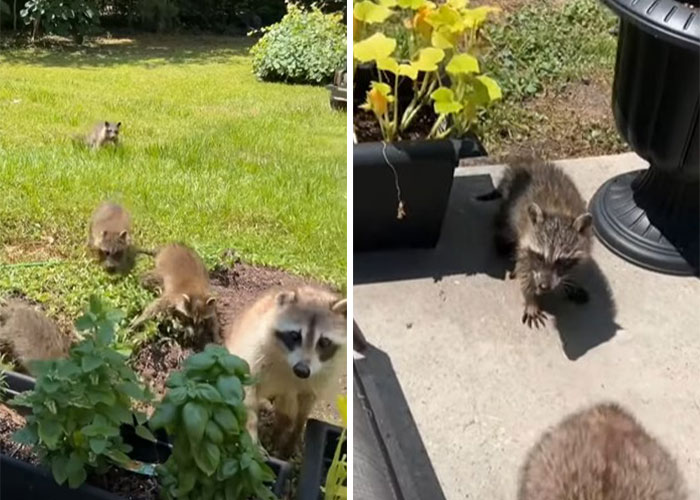 Of course, Roxie had to show off her bundles of joy to her favorite human and grab a little snack on the way 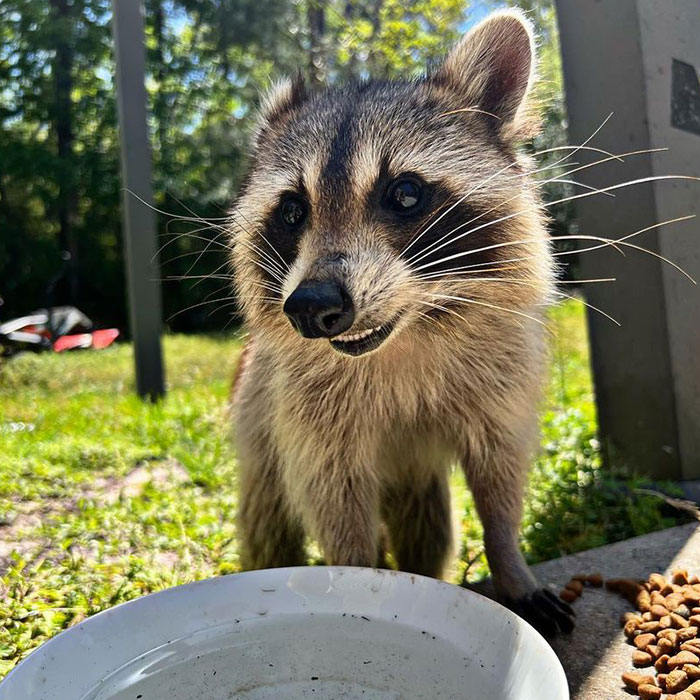 For those new to these delightful bandit-looking creatures, Live Science describes raccoons as round, fuzzy creatures with bushy tails and a black mask of fur that covers their eye area.

Peta explains that since humans have occupied the vast majority of their traditional habitat, the curious and opportunistic raccoons have learned to coexist with people, making encounters extremely common.

Although these animals may look cute, they can be quite ferocious when approached, as they may see humans as a threat. But since Roxie has been around friendly and kind humans for a good while now, she’s a little more used to her two-legged neighbors. So, where did it all start?

Brittany bought the home in April 2021. The previous owner was known for taking care of the wildlife roaming the area by leaving food out 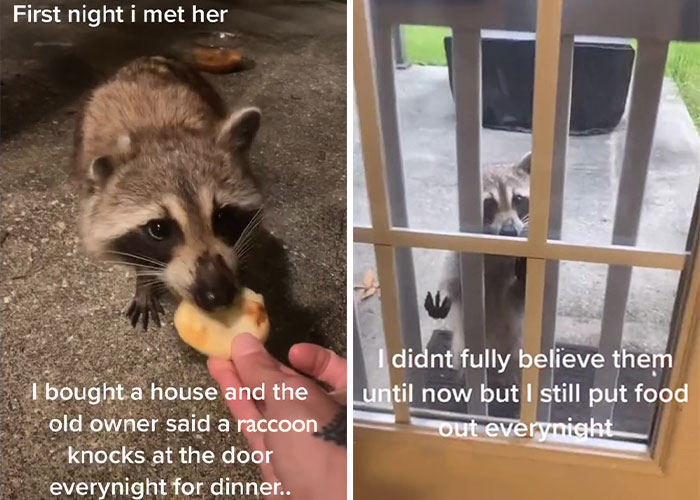 Brittany bought the home in April 2021. The previous owner was known for taking care of the wildlife roaming the area. In a viral TikTok video, which amassed 23.1M views, she explained that a raccoon knocks at the door every night for dinner. “I didn’t fully believe them until about a week after moving in,” Brittany told The Dodo.

To be safe, she still left food out for the creatures nightly. This was a new thing for her, as she hadn’t previously left anything out for the wildlife, but as the animals were already accustomed to the routine, she felt bad about ending the tradition. Throughout the first week, she didn’t hear anything strange happening.

One night she was cooking dinner when she heard something brushing against the door, almost as if trying to knock. She looked, and there it was – the raccoon from the previous owner’s story. The animal was a bit reserved at first but soon realized Brittany was friendly. It started accepting food straight out of the human’s hands, building a strong bond in a few days. 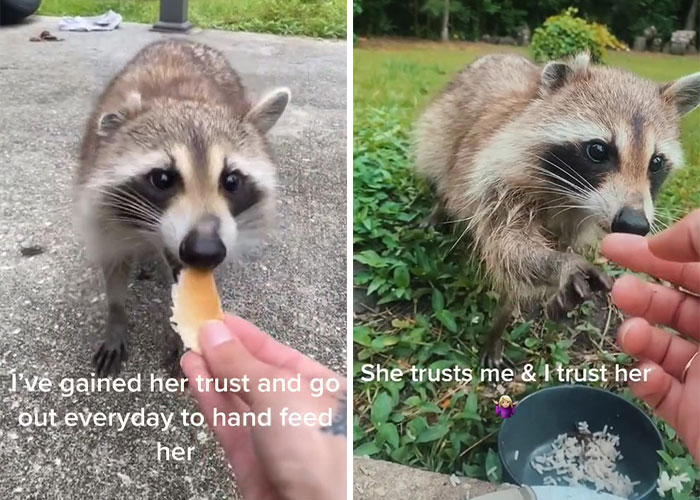 Brittany soon started filming the encounters, gaining a following of 416.9K on TikTok, with people loving their budding friendship. She decided to call the animal Roxie and started spoiling her with grapes, dog food, and even a kiddie pool full of water and berries.

Peta states that raccoons are widely known for their unusual habit of ‘washing’ their food or hands in water. In fact, the scientific name for the raccoon is Procyon lotor, with the Latin word ‘lotor’ meaning ‘washer.’

Many theories have been proposed to explain this interesting ritual, but most scientists believe that it is related to raccoons’ innate tendency to forage for food near water sources.

The new owner didn’t want to break the tradition, which would break apart the animals’ routines, so she left food out herself until the raccoon came to say hello 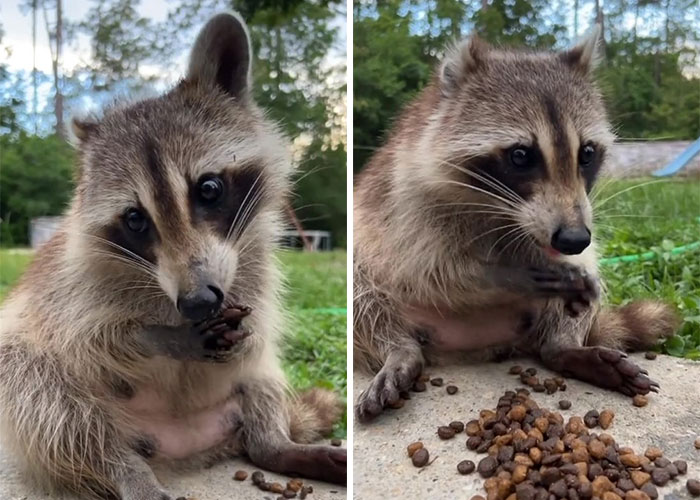 The visits resumed until one day Brittany noticed a change in both the raccoon and its eating habits. Roxie started coming multiple times per day rather than just in the evening.

“In early May, I realized Roxie looked like she had been nursing,” she said. “One morning at her usual time, she showed up on the back porch with the four babies!” The raccoon had a baby the previous year as well, and it still came to visit alongside its mom. Now it would have an additional four siblings. 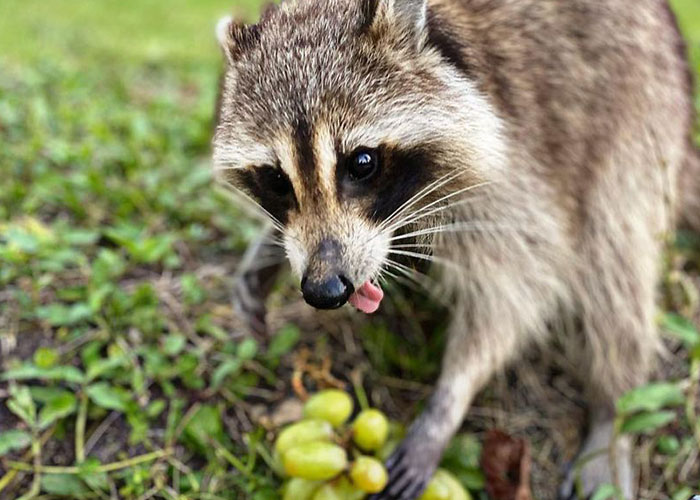 It knocked on the door, and the two started to form a close friendship. Brittany named the raccoon Roxie 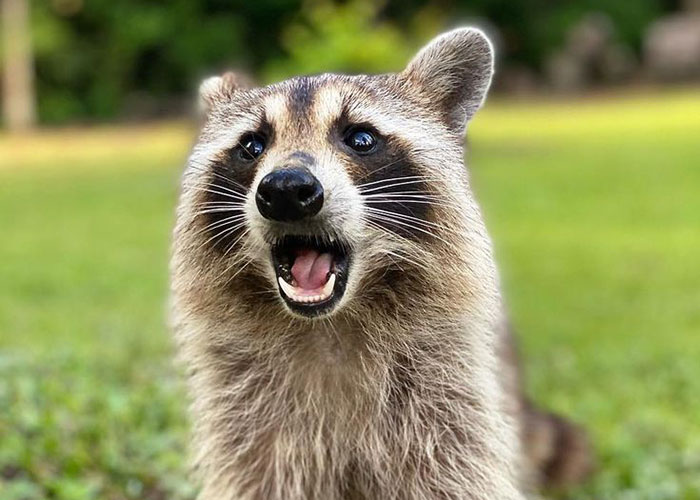 The tiny raccoon family now lives in the woods behind Brittany’s house and it seems they think of her as part of their nursery. According to National Geographic, young raccoons often spend the first two months or so of their lives high in a tree hole. Later, the mom and children move to the ground, allowing the cubs to begin exploring on their own.

The relationship hasn’t only benefited Roxie; it has also helped Brittany realize the path she wants to take in life. “It’s really shown me how much I want to work with animals,” she said. “I’m currently in the process of getting my license to be able to open a non-profit wildlife rescue.” 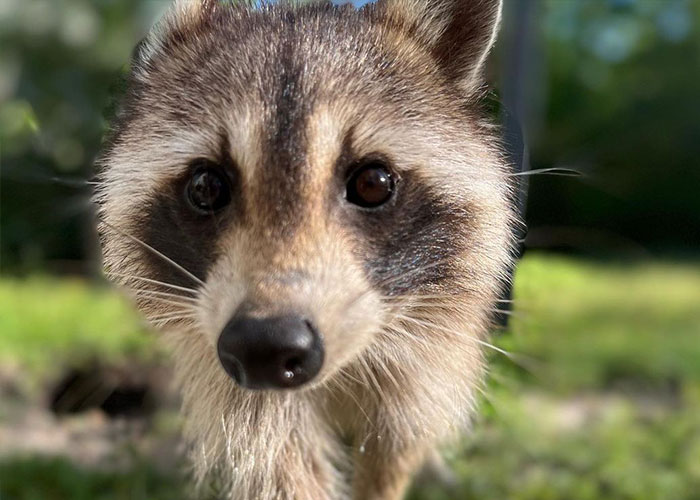 The visits resumed until one day, Brittany noticed a change in both the raccoon and its eating habits. Soon enough, she came by with her babies 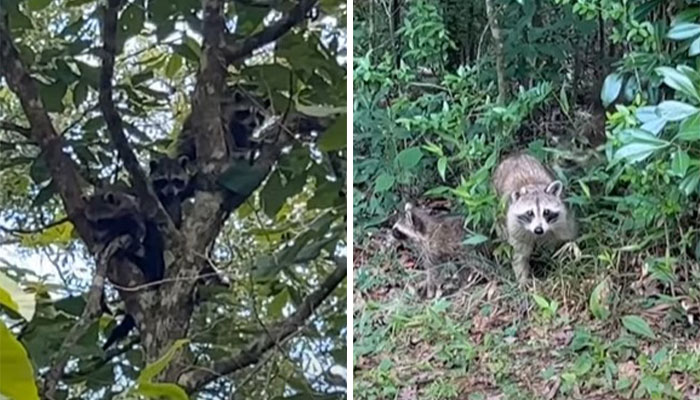 Now, as much as this story resembles a Walt Disney universe, let’s take a little bit of caution, as raccoons aren’t necessarily the ideal neighbors to have.

The Humane Society states that raccoons – along with foxes (red and gray), skunks, and bats – are considered primary carriers of the rabies virus in the United States, although only one person has ever died from from the raccoon strain of rabies, according to the Centers for Disease Control and Prevention (CDC).

Raccoons are not very social creatures and, although happy to make human areas their homes, they can be vicious when approached. But it’s highly unusual for a raccoon to be aggressive toward a person – aka they might hiss at you, but won’t chase you or attack you, unless you get close enough to scratch or bite at.

Alongside rabies, they also tend to carry roundworms and leptospirosis. Humans may be exposed if they come into contact with infected urine, feces or contaminated soil and water. It is imperative to avoid touching wild animals and if contact is necessary to get a raccoon out of your house, call in a professional.

As lovely as this tale is, one word of caution for those wanting to do the same – raccoons can be vicious and carry diseases, so approach at your own risk 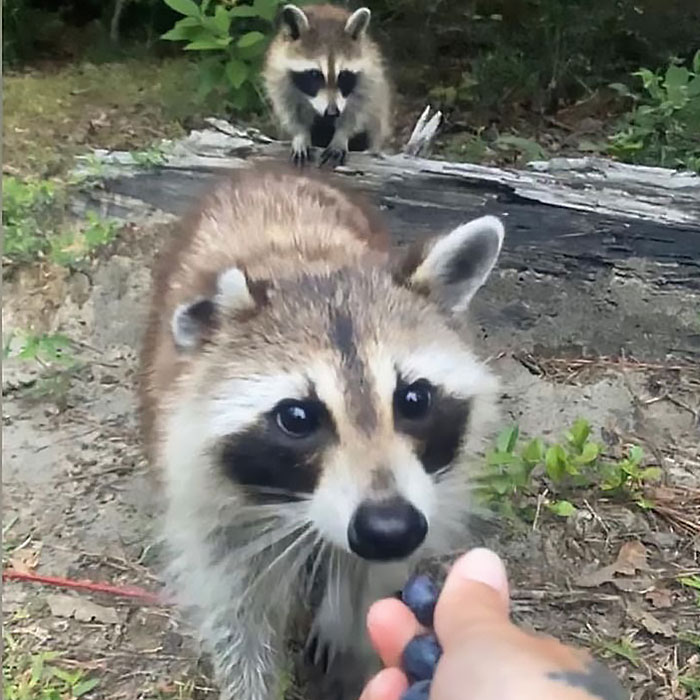 Wildlife is fascinating, and it feels like you’re making a difference when giving an innocent amount of food out to animals, however, many experts agree that it’s a bad idea. The BCSPCA states that wild animals who get used to a hand-out will often take the easy route despite ample natural foods being available.

Habituated wild animals are also more susceptible to predators and vehicle collisions, as they lose their fear of people and the associated flight response. In other cases, wild animals that have been fed regularly can develop food-seeking aggression and can become hostile towards people and pets.

Sorry for being a bit of a Debbie Downer, but it’s important to note these things.

The relationship hasn’t only benefited Roxie but has also helped Brittany realize the path she wants to take in life. We wish them all the best in their future! 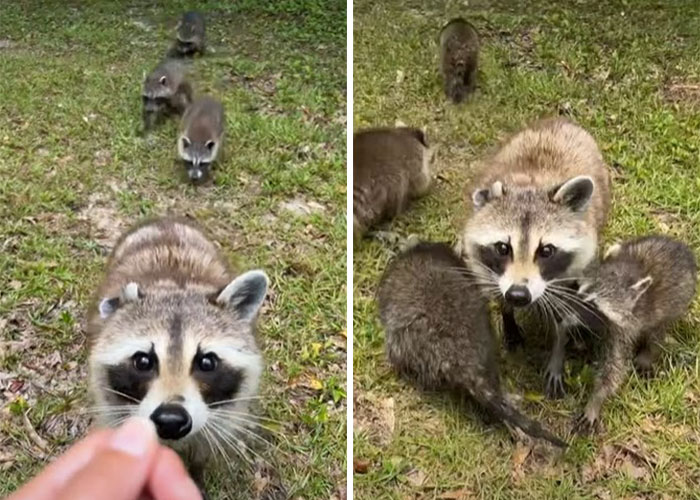 Roxie has had an immense impact on Brittany and all the viewers who enjoy watching her adventures. “Not only has she touched my life in such a positive way, but she sure has brought the internet a lot of smiles,” she said. “I look forward to seeing her every day. She really has become a part of the family.”

We wish the babies, Roxie and Brittany all the best and hope to see more of them soon!

Watch the moment the family emerges from the forest here

Let us know your thoughts in the comments below, and I wish you all the best!

People have loved this tale of friendship, enjoying the tiny miracle of happiness. Let us know your thoughts in the comments!

The post Proud Raccoon Momma Brings Her 4 Kids To Meet The Lady That’d Been Feeding Her first appeared on Bored Panda.