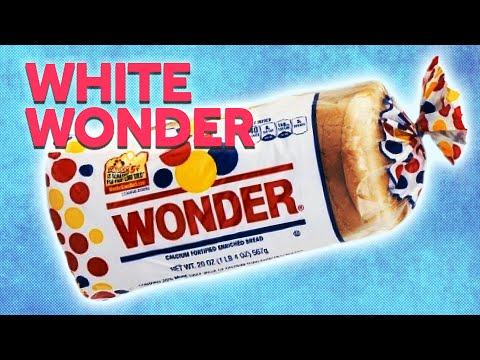 One of the reasons white sliced bread became so ubiquitous was because of the expense of meeting rising food quality and safety standards- only large corporations could afford to scale up the process at the time, and white bread just seemed so clean and modern compared to the darker breads from one’s own kitchen or a local bakery. The upshot was that all the nutrition was taken out of flour to make the bread white, and eventually those nutrients had to be re-added in processed form.

In the generation before mine, white sliced bread was a luxury. One family I knew only let the father eat store-bought bread (which they called “light bread”), while the rest of the family had fresh baked biscuits or cornbread, which now seems totally backwards for a patriarchy. When I was a kid, white bread was an everyday thing, although not Wonder bread because it was relatively expensive. Now even the thought of eating tasteless, gummy, white sliced bread makes me queasy.

If you want to shorten this video’s viewing time, the first two minutes are the history of bread itself, then we get into white bread. -via Boing Boing

The Pioneering Feminists of French Art

How David Lynch Found His Late Style in Lost Highway