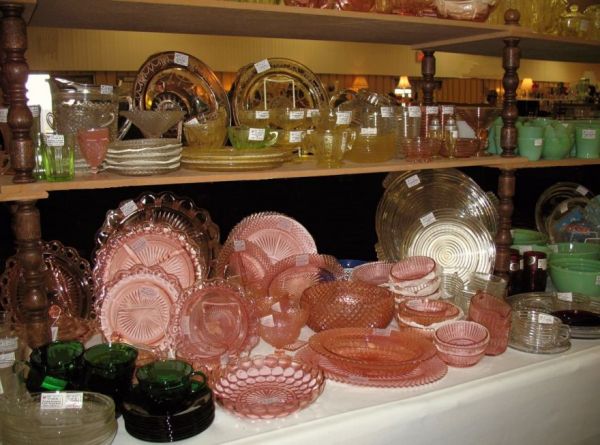 When I was a child, I admired the lovely pink dishes my grandmother had in her china cabinet. She still had a house full of children at that time, and we all ate off those delicate pink dishes. They were Depression glass, a distinctive souvenir of both hard times and the rise of mass production.

Prior to the crash, most glass dinnerware was often clear, and handmade from cut crystal. It cost too much, for even a typical middle class family budget. After Black Tuesday, such extravagances were all but forgotten, as scores of Americans stood in lines waiting for bread.

But a revolutionary machine that used new processes such as mold etching—a method that utilized acid to etch patterns into an iron mold rather than directly onto the glass—made manufacturing glassware quicker and cheaper. The molds themselves were costly, but each one could produce thousands of dishes. Thanks to mechanization, one Depression glass manufacturer, Anchor Hocking, increased glass production from one piece per minute to over 90 pieces per minute. This allowed companies to sell individual dishes, such as tumblers, for a nickel or less.

The price was low enough that such dishes were often offered as premiums for buying other things, such as oatmeal, gasoline, or movie tickets. Read about how Depression glass went from a poor person’s treat to collector’s item at Atlas Obscura. I’m a collector myself, pink, please, like my grandmother’s dishes.