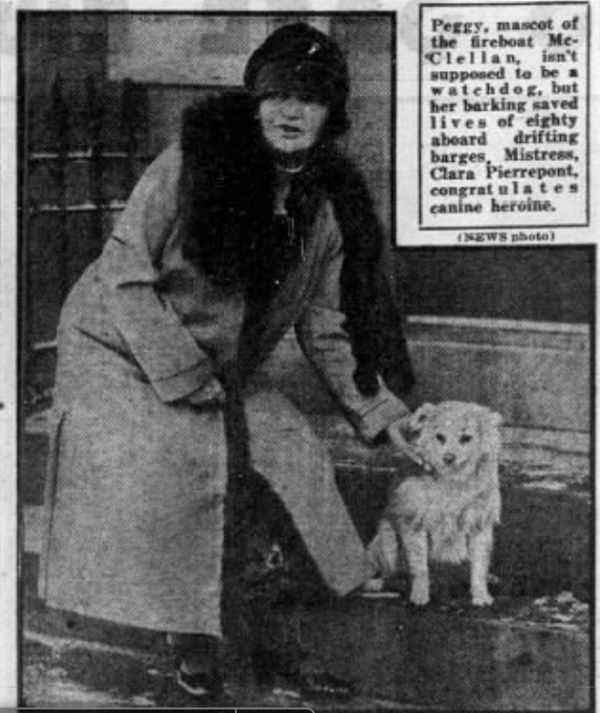 Back in the day, those who made a living hauling goods from the Great Lakes to New York City spent their summers working and the cold winters living on their barges tied to the city’s docks. They couldn’t afford to rent a house on land, and they formed a community of sorts on the water. It was a life they were used to. In the winter of 1926, around 80 men, women, and children lived in 30-40 barges lashed together at the dock end of 96th street. On Christmas night, a storm blew in while the residents were sleeping and somehow caused the moorings that kept the barges in place to came loose. They silently began to drift down the East River, toward what seamen called “Hell Gate,” where currents and tides were particularly dangerous. Two dogs on the barges, named Fanny and Sandy, started barking frantically.

Three blocks away, the city fireboat George B. McClellan was tied up at the foot of 99th Street. Fire Lieutenant John Hughes and his crew of 16 men were below deck. All cuddled up on an old coat on a bench in the McClellan’s cabin was Peggy, a fluffy white spitz dog who served as mascot–not watchdog–of the fireboat.

Hearing Fanny’s barks for help, Peggy awoke from her snooze and sprang from her comfy bed. She leaped through a partly open hatch and landed on the boat’s icy deck.

Peggy responded to Fanny’s barks with her own barks, waking the fire crew. She kept barking, pointing her face in the direction of the drifting barges, until Hughes figured out what was happening. The rescue of the barge fleet was complicated, but could have been a huge disaster for the people on them if it weren’t for the three dogs that were on alert that night. Read about the rescue and about the culture of the barge colony at The Hatching Cat.  -via Strange Company