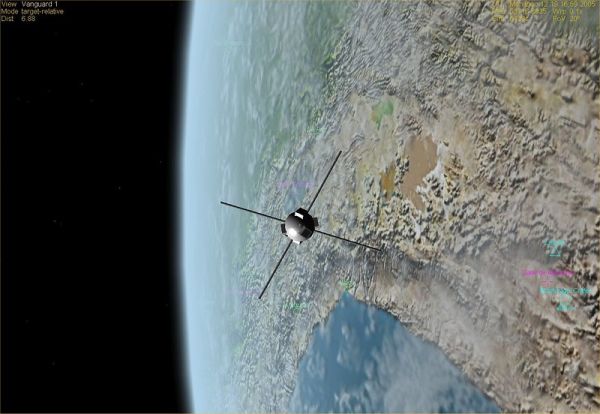 The Soviet Union launched the first leg of the space race in October of 1957, when the satellite Sputnik 1 became the first manmade object to orbit the earth. It was soon followed by Sputnik 2. The United States made a big deal about its first satellite launch, which was on December 6, 1957. The rocket that was to deploy the satellite Vanguard 1 rose four feet and then fell back and exploded, which you can see here. In February of 1958, the US launched Explorer 1, its first successful satellite in orbit. But Vanguard got a second chance, and went into space a month later.

Although tiny, compared to its predecessors, Vanguard 1 had quite a few mission objectives. It carried on board instruments that could measure the densities of the upper atmosphere and the electron content of the ionosphere, which was then used to determine the effect of the space environment on a satellite. It also obtained geodetic measurements through orbit analysis, and these proved that the Earth was indeed pear-shaped with the stem at the North Pole. The launch itself was a test to determine the launch capabilities of a three-stage launch vehicle as a part of Project Vanguard.

The Sputnik satellites lasted a few months each, and Explorer 1 remained in orbit for 12 years. But the Vanguard 1 satellite is still orbiting the earth 63 years later! Read the story of Vanguard, the little satellite that could, at Amusing Planet.

The Fabled Diamonds of Golconda