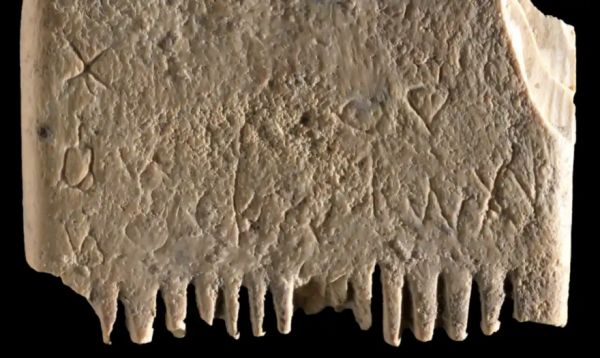 A comb unearthed in 2017 in Israel comes from the ancient Canaanite city of Lachish. It dates back to somewhere around 1700 BCE. An inscription, rendered in the Canaanite alphabet, was only recently deciphered. It contains seven words.

Believed to be the oldest known sentence written in the earliest alphabet, the inscription on the luxury item reads: “May this tusk root out the lice of the hair and the beard.”

That just goes to show how we’ve always been keen on labeling our possessions. While it’s a pretty mundane thing to write down, this is an exciting discovery, as the written Canaanite language it contains is made up of an alphabet invented not long before the comb was made. Previous written language used symbols for complete words, but the Canaanite alphabet introduced the idea of using symbols for the different sounds of language, beginning a system we still use today. Read about this discovery at the Guardian. -via Nag on the Lake