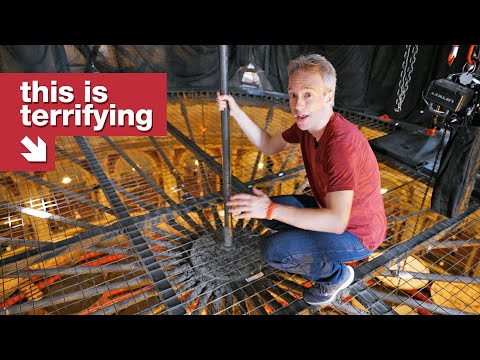 Tom Scott is apparently done with the US for now, and is back in Britain. The Royal Albert Hall in London, an oval-shaped concert hall with a wrought iron and glass dome, was built in 1870. It looked spectacular, but the acoustics were terrible. The glass dome was so expensive and so heavy that replacing it with something else was out of the question, so they started adding features to dampen the echo. That worked, but made the ceiling rather complicated over time. Get a good look at it here. In this video we get a rundown of how the roof was outfitted to alleviate the echo, which is totally worth it to see Tom’s vertigo as he walks across the air vent at the top of the hall, 46 feet above the floor. Hey, I’d be a bit reticent to walk on that bouncy grid myself.