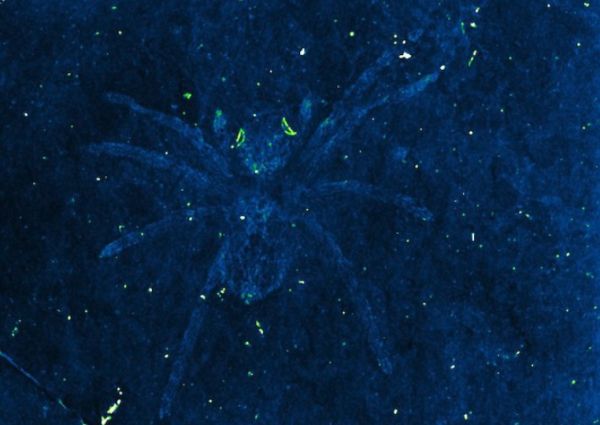 Some species of spider have a type of eye called a tapetum that reflects light, which helps them to see prey at night. The structures that make this kind of eye must be pretty tough, because one fossil has preserved the reflective properties of a spider’s eyes for 110 million years! The fossil was found in South Korea. A spider fossil even without the eye thing is pretty rare. Paul Selden of the University of Kansas, who co-wrote a paper on the discovery, explains why.

“This is so rare because they’re very soft — they don’t have hard shells so they very easily decay,” Selden said. “It has to be a very special situation where they were washed into a body of water. Normally, they’d float. But here, they sunk, and that kept them away from decaying bacteria — it may have been a low-oxygen condition. These rocks also are covered in little crustaceans and fish, so there maybe was some catastrophic event like an algal bloom that trapped them in a mucus mat and sunk them — but that’s conjecture. We don’t really know what caused this, but something killed off a lot of animals around the lake at one time or on an annual basis.”

Read more about the fossilized spider at The University of Kansas. -via Mashable