Despite many unpleasant issues that our society continues to deal with, our planet has millions of little wonders that we sometimes take for granted. While it’s crucial to participate in bettering our community, it’s equally important to appreciate the beautiful things around us, even if the times are tough. Nature remains to be one of the best things that could instantly comfort a person, especially when one requires a distraction from the “outside world,” whether that would be a picnic amongst the breathtaking views or a simple stroll in your nearby park.

What’s even more remarkable is the array of animals that live right beside us. We’re so used to hearing those sweet-sounding birds, yet every winter takes us by surprise, and we fight our way through those dull and cold months.

However, this TikToker truly won the lottery, as the woman is a true bird lover and totally adores crows. The best part is that the crows leave a bunch of little presents for her as a thank you for the food that she kindly offers. The woman posted a few videos revealing what the gifts were like, and fellow online users simply can’t get enough of it. 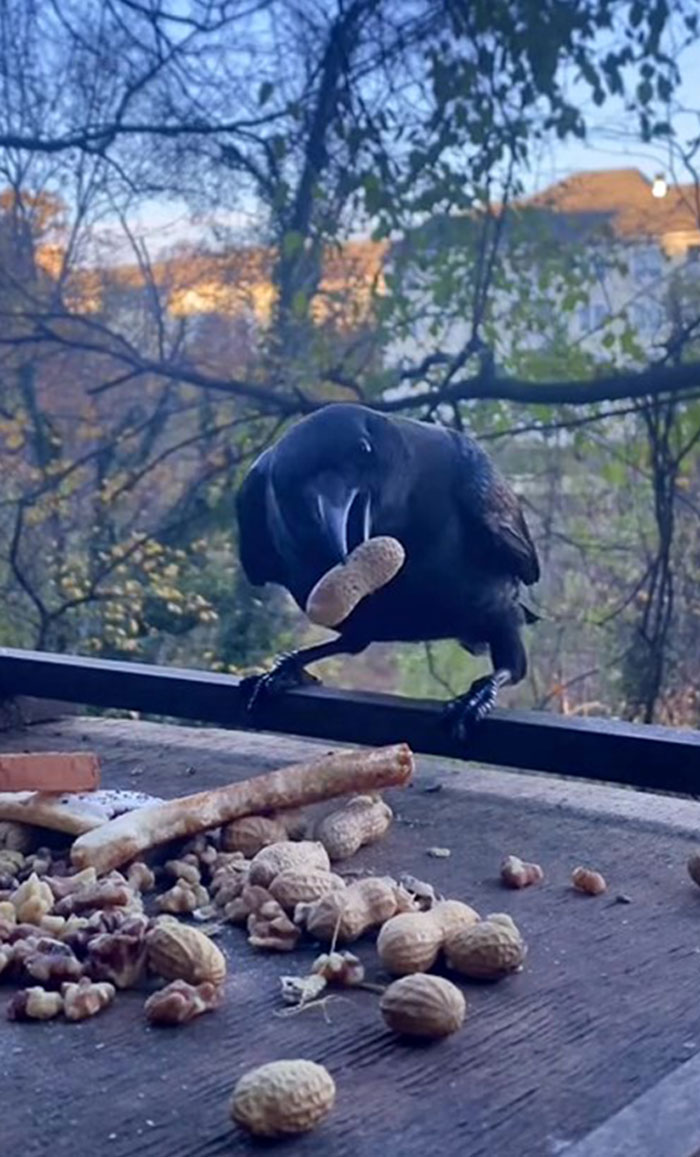 A TikToker and a proud mother from Virginia befriended the crows in her neighborhood and is now documenting and collecting an array of gifts the birds kindly offer her. The crows bring all sorts of tiny things as an appreciation for the snacks that the woman leaves out, forming a cute relationship that online folks are completely in awe of. 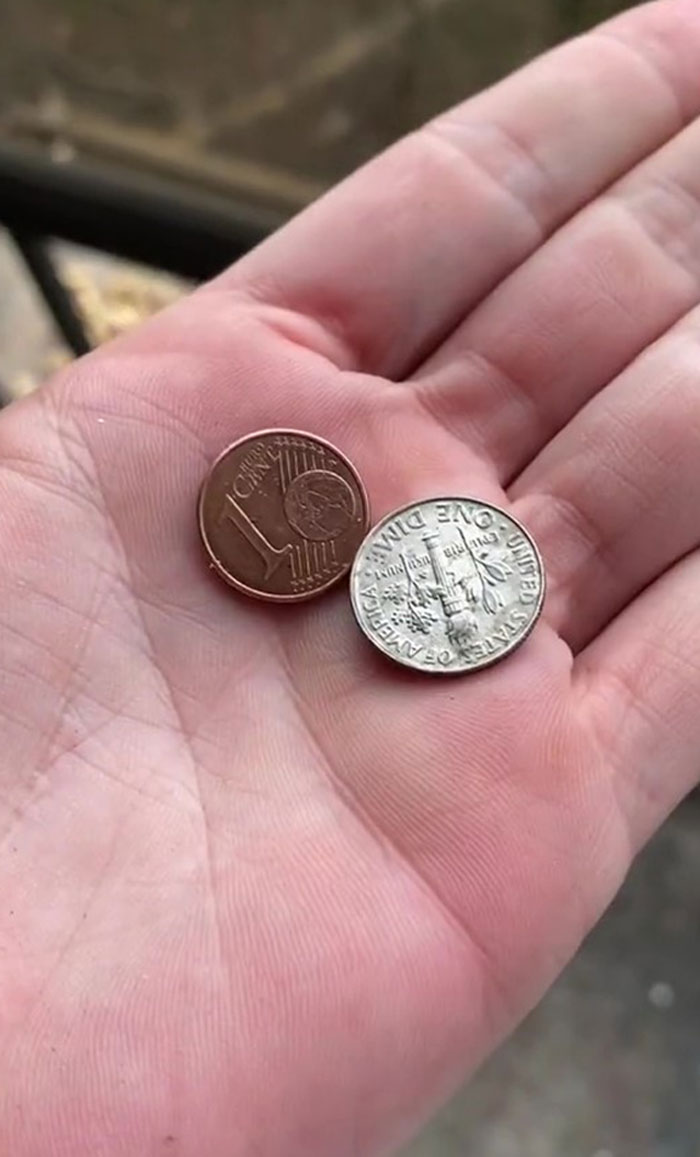 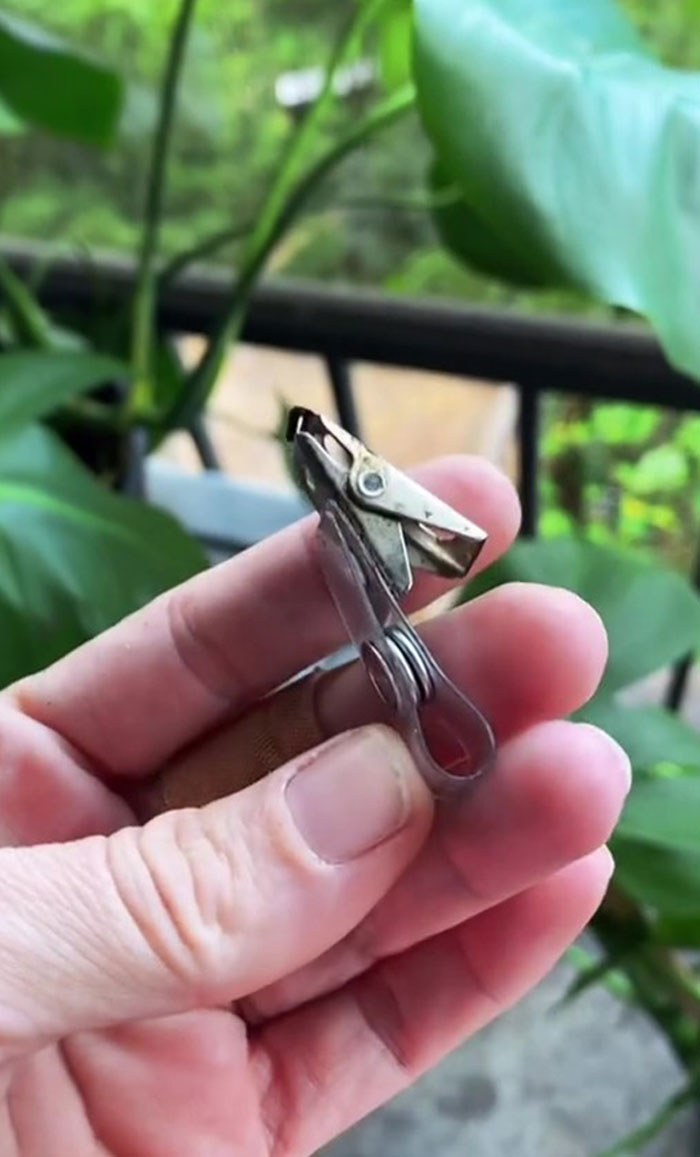 Bored Panda contacted the author to find out how this adorable relationship began. The woman told us that she has been feeding the the local bird population in her area since she moved there 2.5 years ago. The crows would fly through once in a while and she would offer them peanuts.

She then proceeded to explain that since last January, with the pandemic and the mandatory quarantine, she started spending much more time watching and learning to identify all sorts of birds that were occasionally showing up. 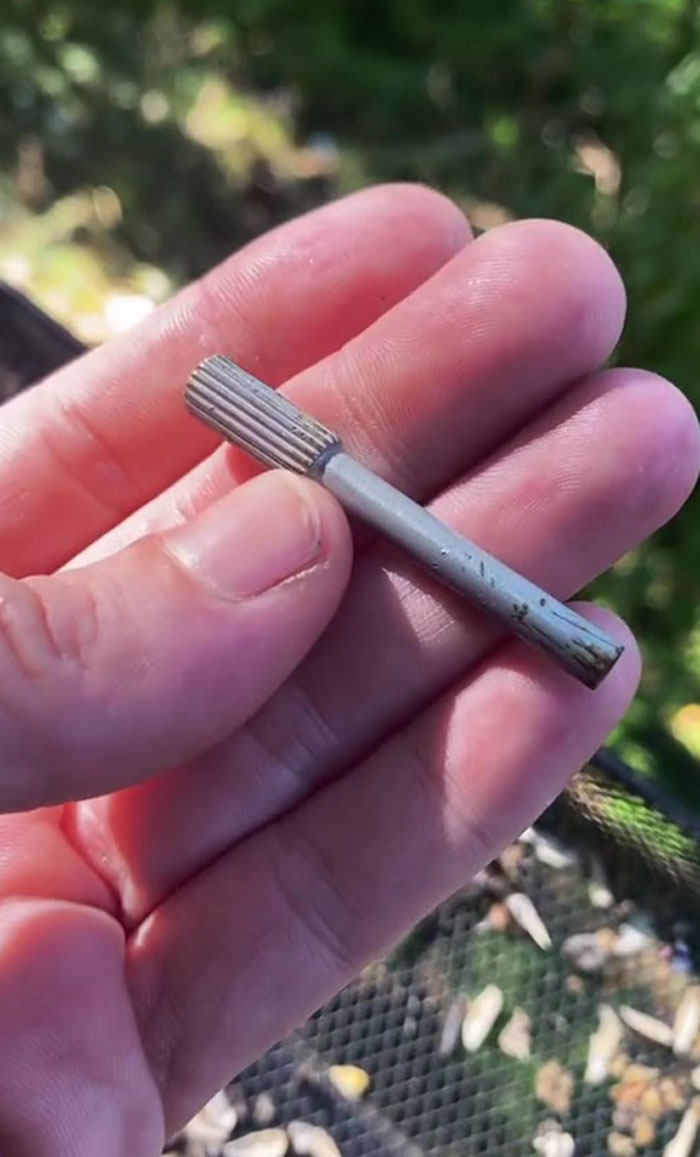 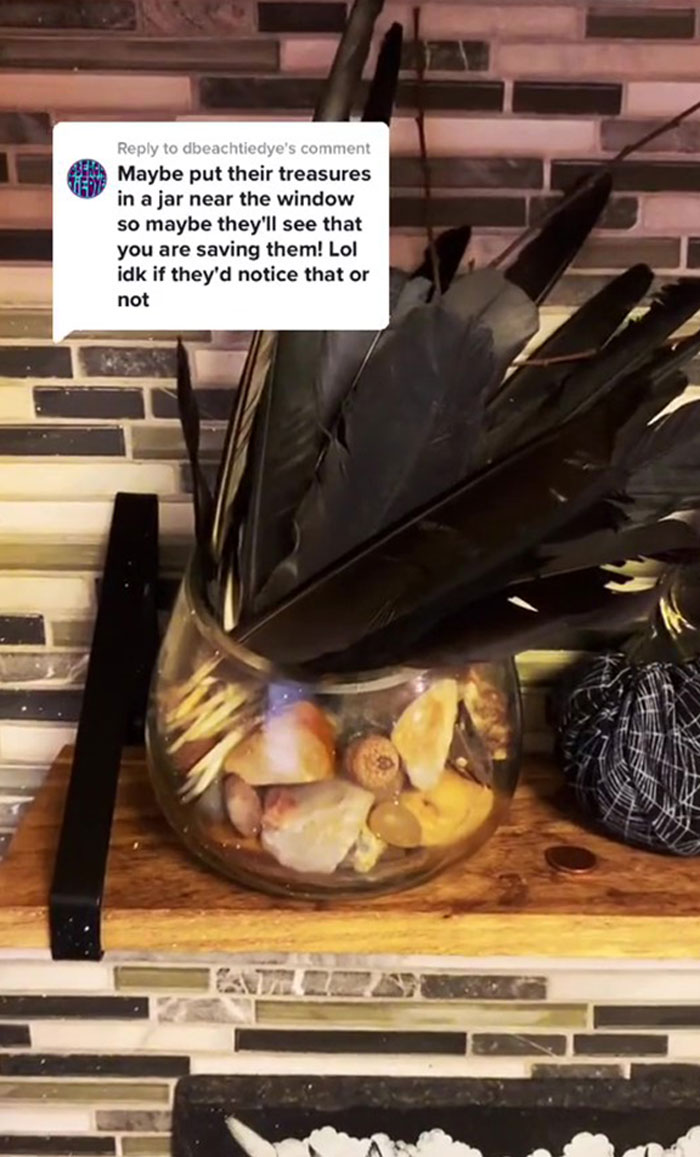 The woman then mentions that the crows started showing up numerous times a day and would sit quietly on a nearby tree, just watching her watch them. She would try and talk to them but usually they would either yell or fly off. However, as the time went by, they started coming over to eat from the ground.

Once the crows started trusting the woman, they would gather almost every morning and call her to feed them. 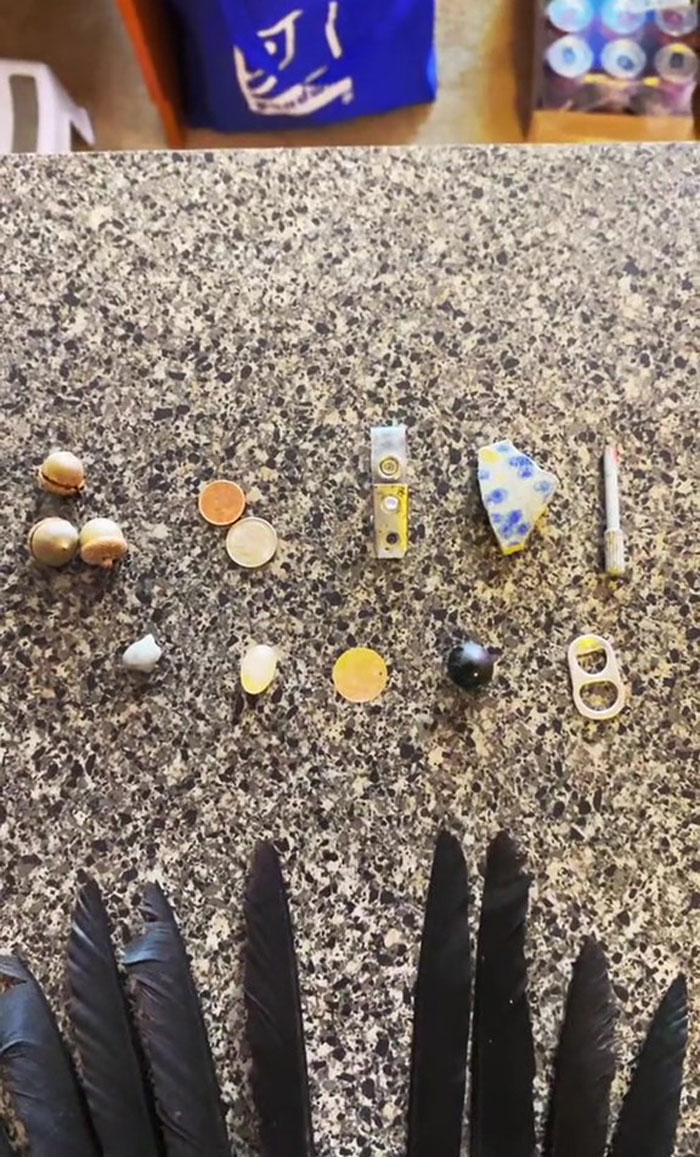 The woman shared that the very first gift the crows brought her was a tiny grey pebble and that once in a while, some other things would show up in the feeders. And as a matter of fact, she also built them a feeding platform back in April but the OP said that they’ve only recently began to come over and actually use it.

BP asked the author if she was always interested in birds, which she confirmed and also revealed that she has an 8-year-old Indian Ringneck called Apollo who she hand raised out of an egg. The woman’s father actually bred and rescued parrots and birds, and the family also had a rehab crow. She shared that her younger sister ended up teaching him how to say “hello” and “I want a pretzel,” and since then, she has been incredibly fascinated by their intelligence. 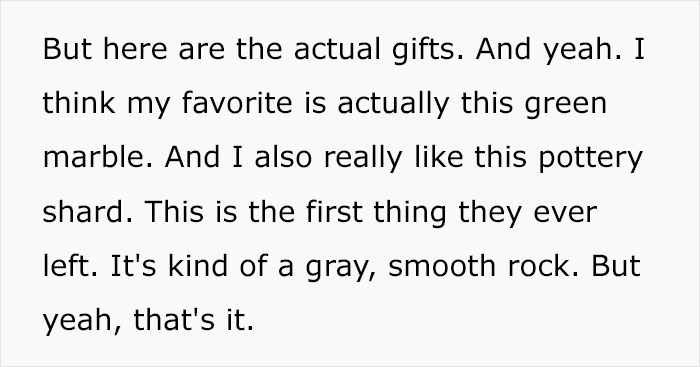 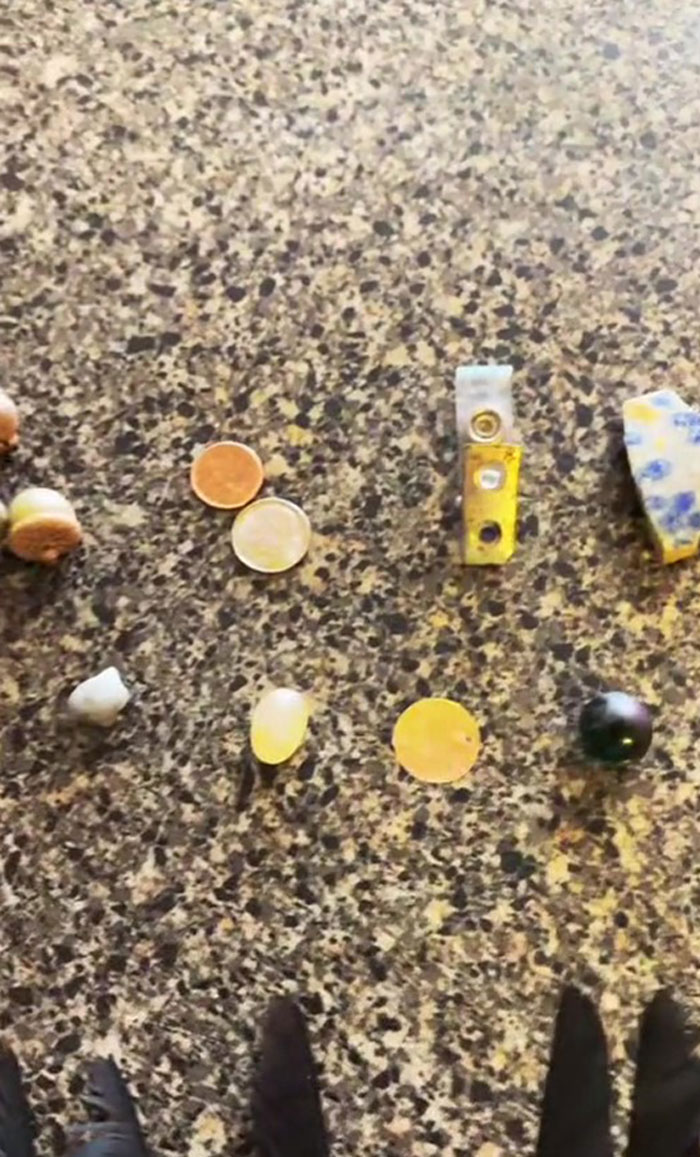 The author added that anyone interested in befriending the crows in their area must do a little research about their diet and behavior. People should remember that even if the birds interact and leave presents, they’re still wild animals who have survived for so long purely because of their mistrust of humans.

Crows are intelligent and curious creatures who often get a bad reputation, which is why the woman is so pumped to see other people being interested in these birds.

The post This Woman Befriended The Crows And Now Receives The Most Random Gifts As A Token Of Appreciation first appeared on Bored Panda.